The main goals of surgical treatment are anatomic reduction of the joint surface, fixation of the fracture with absolute stability, and allowing early rehabilitation. For these purposes, lag screws, lateral locking or unlocking plates and external fixators can be used.[3] In order to preserve the surrounding soft tissue, which plays an important role in knee joint stabilization and coverage, minimal invasive techniques have become popular. In most cases, depression of the joint surface is apparent. Anatomic reduction and filling the defect with autograft, allograft, cement or bone substitutes are supported.[4]

In this retrospective study, a total of 214 skeletally mature patients with tibial plateau fractures operated in Baltalimani Bone and Joint Diseases Training and Research Hospital between January 2005 and December 2014 were evaluated. Of those, 156 patients’ data including pre- and postoperative X-rays, computed tomography (CT) images, and control X-rays for at least one year postoperatively were assessed. Patients were divided as medial, lateral, and bicondylar tibial plateau fracture groups. Seventy-nine patients had lateral tibial plateau fractures with more than 3 mm joint depression and splitting classified as Schatzker type II fracture (Orthopaedic Trauma Association (OTA)/ Arbeitsgemeinschaft für Osteosynthesefragen (AO) 41-B3). Eight patients with posterolateral corner fracture, three patients with open fractures, and seven patients with grade 3-4 gonarthrosis according to Kellgren and Lawrence osteoarthritis classification system were excluded.[6] Sixty-one patients (41 males, 20 females; mean age 43.4±13.1 years; range, 20 to 76 years) were enrolled. None of the patients had vascular or neural injury or compartment syndrome in either the pre- or postoperative period. No additional lower extremity fracture was spotted in 53 cases (86.9%). In eight patients, concurrent fibular head fracture was detected. The study protocol was approved by the Baltalimani Bone and Joint Diseases Training and Research Hospital Ethics Committee (approval number/date: 12/12.09.2014). A written informed consent was obtained from each patient. The study was conducted in accordance with the principles of the Declaration of Helsinki.

Intraoperative mediolateral and anteroposterior (AP) instability examination and final range of motion (ROM) tests were used in clinical evaluation. At the last follow-up visit, single-leg hop test was performed. Postoperative and final radiographs were evaluated to determine radiological outcomes. Ahlback score was used in the evaluation of the degree of arthritis.[7] Routine postoperative radiological examination schedule was 1, 3, 6, 12, and 24 months and the last follow-up. Knee Society Score (KSS), Hospital for Special Surgery (HSS) and short form 36 (SF-36) scores were obtained at the last follow-up.[8,9]

Standard anterolateral approach to the proximal tibia was used in group 2 and mini-incision was used in group 1. The depressed joint surface was elevated from existing fracture line in the anterolateral cortex in both fixation groups. By using submeniscal arthrotomy technique, displaced joint surface was rendered visible. In cases where the anatomic reduction of joint surface was achieved and subchondral bone loss was minimal, the fixation was accomplished by using lateral locking plate (Figure 1) or two or three cannulated lag screws while compressing the fracture line (Figure 2).

Figure 1. (a) Preoperative, (b) early and (c) long-term postoperative radiographs of a patient treated with lateral locking plate.
×

Figure 2. (a) Preoperative, (b) early and (c) long-term postoperative radiographs of a patient treated with cannulated lag screws.
× 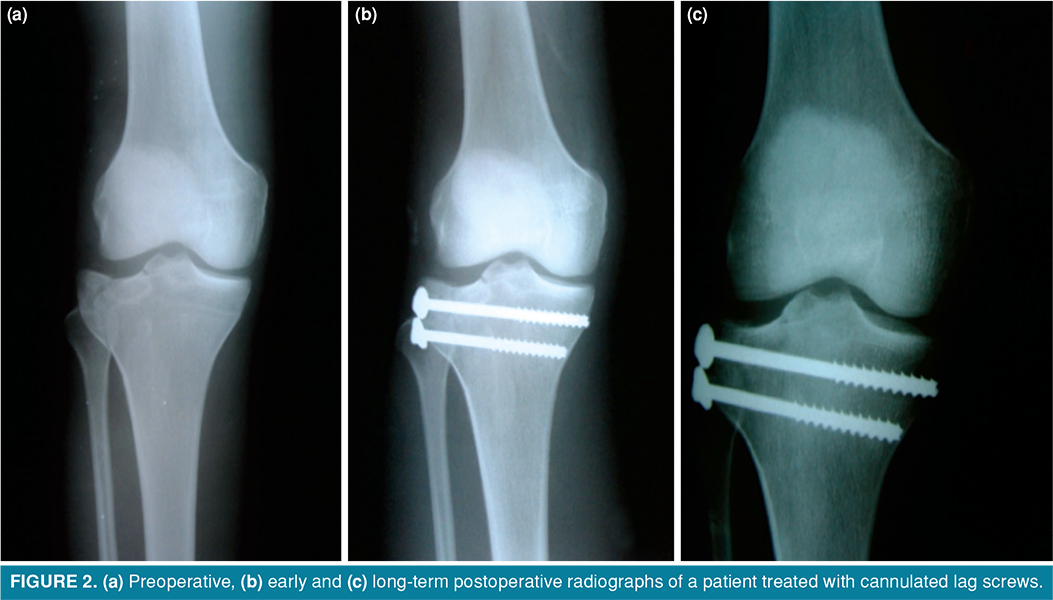 Autograft was used in 40 patients. Of these 40 patients, 25 (67.5%) were in group 2 and 15 (63%) were in group 1. All the depressed joint fragments were elevated until restoration of joint surface by graft impactor. After fluoroscopic and direct evaluation of medial and lateral tibial plateau levels and lateral joint surface restoration, internal fixation was performed.

Patients admitted to two orthopedic clinics in our hospital were included in the study. One of these clinics uses only locking plates while the other uses only lag screw fixation to treat Schatzker type II fractures routinely. Thus the type of implant used during the surgery was based on the clinics’ choice.

The same postoperative rehabilitation program was applied to all patients. In the postoperative first day, continuous passive motion was started. Passive and active ROM exercises were initiated immediately. Weight bearing was restricted during the first 12 weeks. Then, partial weight bearing with gradual increase was allowed if union was confirmed both clinically and radiologically.

In the descriptive statistics of the obtained data, the values were expressed as mean, standard deviation, median, lowest, highest, rate, and frequency. The distribution of variables was controlled by Shapiro- Wilk test. For the analysis of quantitative data, independent sampling t-test used. For the analysis of qualitative data, chi-square test/Fisher’s exact test was performed. IBM SPSS statistics version 19.0 software (IBM Corp., Armonk, NY, USA) was used for statistical analysis.

The mean duration of surgery was 99.3±55.3 minutes (range, 35 to 240 minutes) in group 1, whereas it was 133.1±56.2 minutes (range, 52-330 minutes) in group 2. There was a statistically significant difference between two groups in terms of surgery durations (p<0.001). Since the patients with longer operation duration had additional injuries that did not meet the exclusion criteria but required simultaneous surgical treatment, and the data were obtained from the hospital's registration system, the duration of surgery in some patients appears to be long.

There was no significant difference between the groups in terms of gender, age, pre- and postoperative arthritis, mediolateral instability, body mass index, and AP instability (Table I).

Single-leg hop test results and the average final ROM in groups 1 and 2 were similar (p=0.55 and p=0.40, respectively). There was no significant difference between the two groups regarding clinical and functional scores such as SF-36, KSS, and HSS at last follow-up (Table II).

The most important finding of our study was that there was no statistically significant difference in the clinical and radiological outcomes between the lag screw group and the anatomic plate group.[10] In addition, hospitalization and operation durations were shorter, the cost of materials used during surgery was lower, and treatment could be performed less invasively in the lag screw group.

In their cadaveric study, Boisrenoult et al.[5] reported no statistical difference between lateral pre-bent plates and double lag screws regarding biomechanical stability. This finding is consistent with our study. Van Dreumel et al.[11] evaluated the results of surgical treatment of tibial plateau fractures; lag screw fixation was applied in the treatment of Schatzker type II fractures. However, it was emphasized that these patients might have had good bone quality and simple fractures. Most of the patients in our study were male (67%) and the mean age was relatively younger. Thus, bone quality was also considered to be good in our patients.

Sament et al.[12] treated tibial plateau fractures with percutaneous lag screw technique and showed good results at a mean follow-up of three years. In this study, percutaneous lag screw fixation was demonstrated to reduce the length of hospital stay and costs and enabled early mobilization; however, possible intraarticular pathologies were not evaluated and no intervention was performed for these during surgery. In our study, meniscal tears detected by arthrotomy in 11 patients were treated simultaneously and autograft was applied for some fractures. In addition, the joint line was visible directly and anatomic reduction was confirmed. Therefore, we recommend percutaneous fixation in fractures with lesser depression and low-energy injuries where the risk of concomitant soft tissue injury is lower.

In a study of Siegler et al.,[13] Schatzker type II fractures were treated with arthroscopy-assisted lag screw fixation. Osteoarthritis was seen in 46% of the patients in the long-term follow-up period and 80% of them were determined to be stage 1 according to the Ahlback classification. In this study, age was found to be a risk factor for osteoarthritis development and it had no negative impact on clinical outcomes other than returning to sports. In our study, the average rate of development of osteoarthritis was approximately 35% at a mean follow-up of 34 months, and most of them (60%) were at stage 1. We did not use arthroscopy and our results were slightly better, while our follow-up time was shorter. Hung et al.[14] found the results of arthroscopy-assisted surgery to be successful and patients who had intraarticular pathology could be intervened simultaneously. In our study, intraarticular pathologies were controlled by partial arthrotomy and successful results were obtained without the need for arthroscopy.

Moreover, Russell et al.[4] compared the results of autograft with calcium phosphate cement in the treatment of tibial plateau fractures and calcium phosphate was found to be more successful. Authors did not mention how much calcium phosphate cement increased the cost while we could get successful results in our study by using autograft. Berkes et al.[15] followed Schatzker type II fractures for two years and compared using allograft with calcium phosphate cement, determining similar results within each group. Compared to our study, higher-cost implants were used and similar clinical results were found. Ollivier et al.[16] corrected depression by using balloon tibioplasty in lateral plateau fractures present with depression and applied fixation with lag screws; the results were also successful. We do not need a procedure that increases the cost of treatment considerably and can provide autografts if the similar functional outcomes are sought.

Surgical treatment provides mechanical joint stability and starting immediate ROM while knee joint function is regained. The main purpose is to deliver long-term survival by preventing a possible traumatic, secondary osteoarthritis. By anatomic reduction of the joint cartilage and providing proper mechanical axis, secondary osteoarthritis may be prevented. There was no statistically significant difference in post-traumatic arthritis between the two groups. This shows us that the type of fixation does not have any effect on arthritis in short- and medium-terms.

The retrospective nature, relatively small sample size, and lack of long-term clinical and radiological outcomes were the limitations of our study.