External and internal hemipelvectomy: A retrospective analysis of 68 cases

Objectives: This study aims to investigate the factors that may be associated with surgical site infection and mortality in pelvic resection surgeries.

External and internal hemipelvectomy are rare surgical treatment methods applied in primary malignant tumors of the pelvis, pelvic metastases, infections or severe trauma.[1,2] Bone and soft tissue tumors of the pelvis are rare and difficult to treat due to the complex anatomical structure of the region. At the time of hospital admission, the tumor size is usually large and surgical treatment is difficult due to its close relationship with neurovascular, intestinal and urogenital structures.[2] The diagnosis process starts with clinical suspicion and physical examination and, then, appropriate imaging techniques are used. After the radiological work-up, a biopsy procedure is performed to identify the histopathological diagnosis.[3]

The main goal of surgery is to provide local tumor control while preserving the patient's quality of life as much as possible.[4,5] Infection, delayed wound healing, soft tissue defect, neurological damage, visceral and vascular injury are the main complications that can be seen frequently.[2,4-12] Surgical site infection and wound problems are the most common complications after pelvic resection. After most pelvic resection procedures, multiple surgical debridements may be required due to surgical site infection.[2]

This single-center, retrospective, observational study was conducted at Ankara University Faculty of Medicine Orthopedic Oncology Center, Department of Orthopedics and Traumatology between January 2010 and January 2020. The records of a total of 68 patients (40 males, 28 females; mean age: 43±16.2 years; range, 11 to 70 years) who underwent internal or external hemipelvectomy and were followed for minimum two years or until death were analyzed. All patients who underwent pelvic resection at our institution, regardless of etiology, were included in the study. We excluded patients with a follow-up period of less than two years. We collected data regarding histopathological diagnosis, type of the surgical technique, postoperative infection, duration of follow-up, and mortality. A written informed consent was obtained from each patient. The study protocol was approved by the Ankara University Faculty of Medicine Institutional Review Board (Decree No: I5-302-21). The study was conducted in accordance with the principles of the Declaration of Helsinki. A detailed medical history, physical examination, routine blood tests, conventional X-rays, computed tomography (CT), and magnetic resonance imaging (MRI) were mandatory for appropriate preoperative evaluation. Chest CT, whole-body bone scintigraphy or positron emission tomography (PET)/CT were also required. All patients underwent biopsy preoperatively for definitive histopathological diagnosis. We staged tumors using the system of the Musculoskeletal Tumor Society (Enneking Staging System), which classifies lesions by grade and local anatomic extent.

The patients were discussed in the Multidisciplinary Tumor Board which includes surgical oncologists, medical oncologists, radiation oncologists, radiologists and pathologists. Clinical treatment plans were determined according to Multidisciplinary Tumor Board recommendations. A total of 29 (42.6%) patients underwent external hemipelvectomy and 39 (57.4%) patients were treated with internal hemipelvectomy. Nineteen (27.9%) patients received chemotherapy. In three (7.7%) patients, radiotherapy was administered. Ten (25.6%) patients received both radiotherapy and chemotherapy.

Pelvic resection types were classified using the system of Enneking and Dunham.[11] Definitive histopathological diagnoses and mass diameters were determined by examining the postoperative pathology reports. The patients were divided into two groups according to the largest diameter size in the pathology report. A cut-off value of 10 cm was used.

The hospital records were examined and it was determined whether the patients had postoperative wound problems and surgical site infection. The criteria used to establish postoperative surgical site infection were as follows: purulent drainage from the incision site, demonstration of microorganisms in the culture of fluid or tissue from the wound, presence of at least two of the signs of infection such as localized swelling, tenderness, pain, redness and warmth.[7] Surgical site infections were classified as superficial or deep. Infections involving the skin and subcutaneous tissue associated with the incision site were grouped as superficial infections. Those involving the fascia, muscles, or deep pelvic soft tissues were classified as deep infections.

The patients who underwent pelvic resection surgery were followed postoperatively at regular intervals of three months for the first one year, every six months for the next two years and, then, annually. Postoperative follow-up times from the date of the surgery and mortality status were obtained according to hospital records. 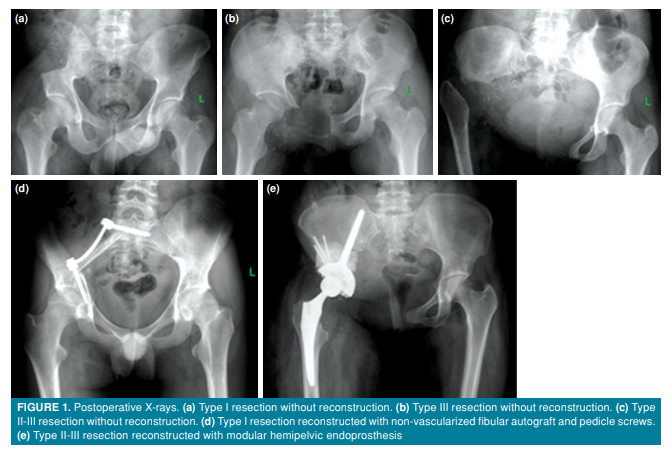 Of 68 patients, 61 had primary malignant pelvic tumors and two had malignant pelvic metastases. Other five patients underwent internal/external hemipelvectomy for non-malignant reasons. Of these five patients, two had a giant cell tumor, two had a pelvic hydatid cyst, and one had an aneurysmal bone cyst. According to the histopathological diagnosis, the three most common pelvic tumors were chondrosarcoma (n=25, 36.7%), osteosarcoma (n=13, 19.1%) and Ewing sarcoma (n=8, 11.8%). Other histopathological types and Enneking stages are described in Table II.

Surgical site infections were observed in 34 (50.0%) patients. Of 34 patients, 15 (22.1%) had superficial infections and 19 (27.9%) had deep surgical infections. Vacuum-assisted closure (VAC) therapy was used in 17 (25.0%) patients. Thirty (44.1%) patients were reoperated due to infection and debridement was performed. In one patient, we had to convert internal to external hemipelvectomy due to non-manageable surgical site infection (Table III). Intravenous antibiotic prophylaxis containing cefazolin (infusion of 1,000 mg during an 8-h period three times daily) was administered to all patients for two days postoperatively. If colon resection was performed during surgery, gentamicin and metronidazole were also added to antibiotic prophylaxis. Cultures were obtained from patients who showed signs of postoperative surgical site infection. According to the culture results, antibiotic regimens were expanded by consulting the infectious diseases department.

The effect of tumor size on postoperative infection rates in patients who underwent internal hemipelvectomy was investigated. The patients were divided into two groups according to the largest diameter size in the pathology report. Using a cut-off value of 10 cm, superficial or deep infection rate was 37.9% (11/29) for the “>10 cm diameter group” and 30.0% (3/10) for “>10 cm diameter group”. This difference was not statistically significant (Table IV). 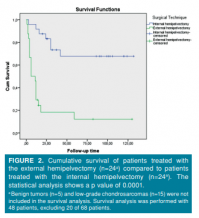 Figure 2. Cumulative survival of patients treated with the external hemipelvectomy (n=24a ) compared to patients treated with the internal hemipelvectomy (n=24a ). The statistical analysis shows a p value of 0.0001. / a Benign tumors (n=5) and low-grade chondrosarcomas (n=15) were not included in the survival analysis. Survival analysis was performed with 48 patients, excluding 20 of 68 patients.
× 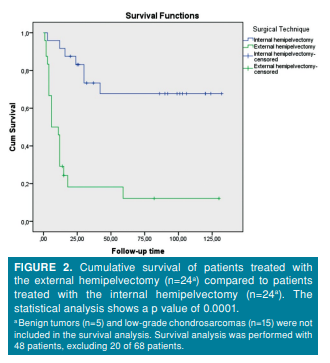 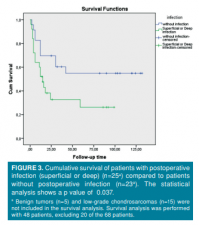 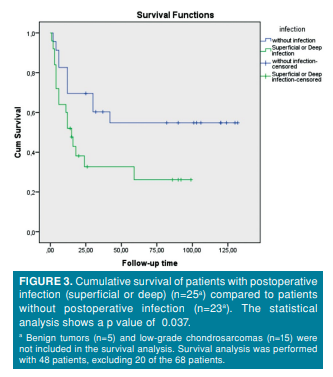 The effect of Enneking stages of malignant pelvic tumors on survival was investigated using the Kaplan-Meier analysis. Cumulative survival decreased as the stage progressed (Figure 4). According to log-rank, Breslow and Tarone-Ware analysis, there was a statistically significant relationship between the stage and the survival (p<0.0001). 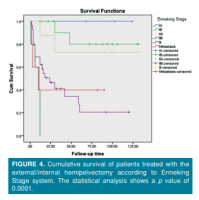 Figure 4. Cumulative survival of patients treated with the external/internal hemipelvectomy according to Enneking Stage system. The statistical analysis shows a p value of 0.0001.
× 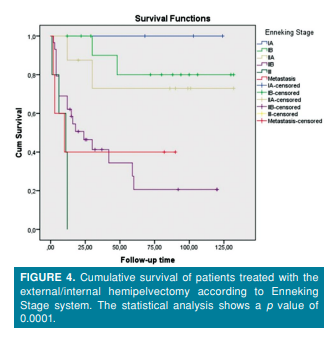 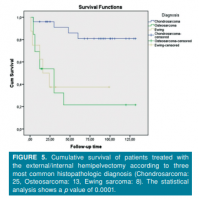 Figure 5. Cumulative survival of patients treated with the external/internal hemipelvectomy according to three most common histopathologic diagnosis (Chondrosarcoma: 25, Osteosarcoma: 13, Ewing sarcoma: 8). The statistical analysis shows a p value of 0.0001.
× 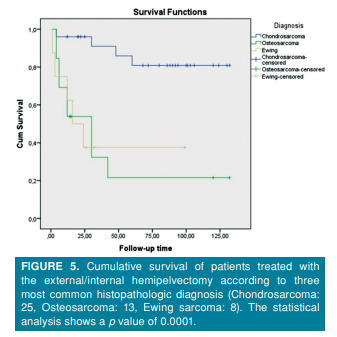 The pelvis contains many lymph nodes and lymph vessels. Lymphatic vessels are frequently damaged and disrupted in pelvic resection surgeries, and if not detected intraoperatively, it can cause postoperative lymph leakage.[21] The collection of lymphatic fluid can lead to postoperative wound discharge and infection. Type II and type III resections are more likely to damage lymphatics due to their anatomical proximity to the lymphatic vessels. Type I resections are safer, as they are far from the lymphatics. This may explain the lesser rate of infection in type I resections in our study.

Urogenital injuries are not rare in hemipelvectomy surgeries. Senchenkov et al.[12] reported that 1.8% of the patients (3/160) had urogenital injuries. In our case series, urogenital injuries were observed in two (2.9%) patients. One of the two patients, capsular injury occurred in prostate capsule and intraoperative repair was performed by the urology team. The other patient was admitted to the hospital with wound discharge at the postoperative third month. It was learned that the discharge started immediately after the prophylactically placed double J catheter was removed. Multiple debridements and VAC treatment were applied. The liquid accumulated in the VAC collection cup was clear and similar to urine. The urea and creatinine values in the sample sent from the liquid were compatible with the urine. The patient was consulted to the urology department and a double J catheter was inserted again. After the catheter application, the wound problem was resolved, since the urine leakage was prevented. It should be kept in mind that late noticed urinary injury may present with the complaint of discharge at the wound site.

This study is also limited by its retrospective design. The lack of the functional scores and operative times are the other limitations of the study. However, this study is among the largest series on hemipelvectomy surgeries in a single institute.

In conclusion, external and internal hemipelvectomy are rare surgical treatment methods that are often applied for pelvic tumors. Due to the complex anatomical structure of the pelvis, pelvic resections are difficult surgeries that require clinical experience. It is necessary to make a detailed surgical plan preoperatively. Before planning surgery, radiological and histopathological evaluation should be completed. Patients should be consulted to general surgery and urology preoperatively. Complication rates are high in pelvic resection surgeries, and the most common complication is superficial or deep surgical site infection. Surgical site infection reduces survival and increases morbidity. Superficial or deep surgical site infection rates are lower in the internal hemipelvectomy, compared to external hemipelvectomy. Although there is no statistically significant difference, reconstruction procedures increase the rate of infection in internal hemipelvectomies. Histopathological diagnosis is associated with survival. Estimated survival decreases, as the stage of the tumor progresses.