Comparison of two different screw trajectories in the treatment of oblique scaphoid fractures: A mechanical study on composite bone models

Conclusion: In our study, we found that the stability of the screws which laid perpendicular to the fracture line and parallel to the long axis of the scaphoid was the same in fixing oblique scaphoid fractures.

The scaphoid bone is the most commonly fractured carpal bone and accounts for 15% of all wrist fractures.[1,2] Transverse waist fractures (Herbert Type B2) are the most common type of unstable acute scaphoid fractures, followed by oblique scaphoid fractures (Herbert Type B1).[3] Oblique scaphoid fractures are difficult to treat due to the shear forces generated by a more vertical pattern in the fracture line and the a high tendency toward development of a humpback deformity.[4] Many studies have suggested that centrally placed screw fixation may be the most appropriate treatment option for all types of scaphoid bone fractures.[5-9] On the other hand, we believe that similar stability may be achieved with perpendicular screw fixation (PSF) due to the increased contact surface of fragments. Using the finite models, results similar to the behavior of materials in real-life environments are obtained in the in vivo settings. Results are expressed mathematically.[10] Finite element study takes long time for planning. It is not an easy nonbiological test.[11] However, the Sawbones (Sawbones Inc., WA, USA) are good alternative to finite element studies.[12] Finite element models (FEM) are very effective methods for testing the structure’s behavior, when they are under the applied forces. They can be used to compare mechanical behavior of materials.[13] The Sawbones are used as test materials and reliable for carpal bones.[14,15] Therefore, we hypothesized that better mechanical results could be achieved with a screw laid perpendicular to the fracture line on oblique scaphoid fractures. To test our hypothesis, we designed a mechanical study on composite bone models aiming to compare these two different screw trajectories on oblique scaphoid fractures. In this mechanical study, we aimed to compare screw fixation perpendicular to the oblique osteotomy line with centrally placed screw fixation in terms of durability against axial loads and maximum displacement seen on composite scaphoid bone models.

This mechanical study was conducted at University of Health Sciences, Istanbul Kanuni Sultan Suleyman Training and Research Hospital, Department of Orthopedics and Traumatology between June 2020 and February 2021. The study protocol was approved by Institutional Review Board (Date: 01.06.2020).

A total of 14 composite anatomic left scaphoid bone models (Sawbones Inc., WA, USA; Scaphoid, Foam Cortical Shell, Left SKU: 1010) were used in this study. To obtain a Herbert Type B1 fracture on these bone models, an oblique osteotomy was applied with the same technique as described by Faucher et al.[4] in their cadaveric study. With the aim of achieving a standardized reproducible osteotomy method, the proximal and distal poles were marked to determine the long axis of scaphoid bones. Subsequently, by drawing a line at an angle of 45 degrees to the long axis of scaphoid and roughly in line with the dorsal sulcus, the planned osteotomy line was created on all bone models (Figure 1a). Before making an oblique osteotomy, a guidewire was sent at a 90-degree angle to the planned osteotomy line on seven bone models and parallel to the long axis of the scaphoid bone for the other group. Screw paths were opened in both groups by drilling over the guidewires (Figure 1b). Then, the oblique osteotomy on the marked line was made by using a thin blade saw that has a 5-mm width and 0.5-mm thickness (Figure 1c). After each osteotomy was created, the fragments were reduced anatomically and screwed. A length gauge was used to determine the appropriate screw length for each group. While the first group of oblique osteotomies were fixed with headless, fully-threaded 20-mm cannulated screws (TST Medical Devices, Istanbul, Turkey) laid perpendicular to the osteotomy line, the other group of osteotomies were fixed with headless, fully-threaded 24-mm cannulated screws (TST Medical Devices, Istanbul, Turkey) laid centrally to the long axis of scaphoid bone models (Figure 1d, e). Appropriate screw length was confirmed using visual inspection, and all screws were placed distal to proximal direction using a volar origin. 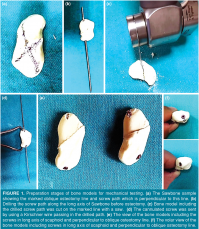 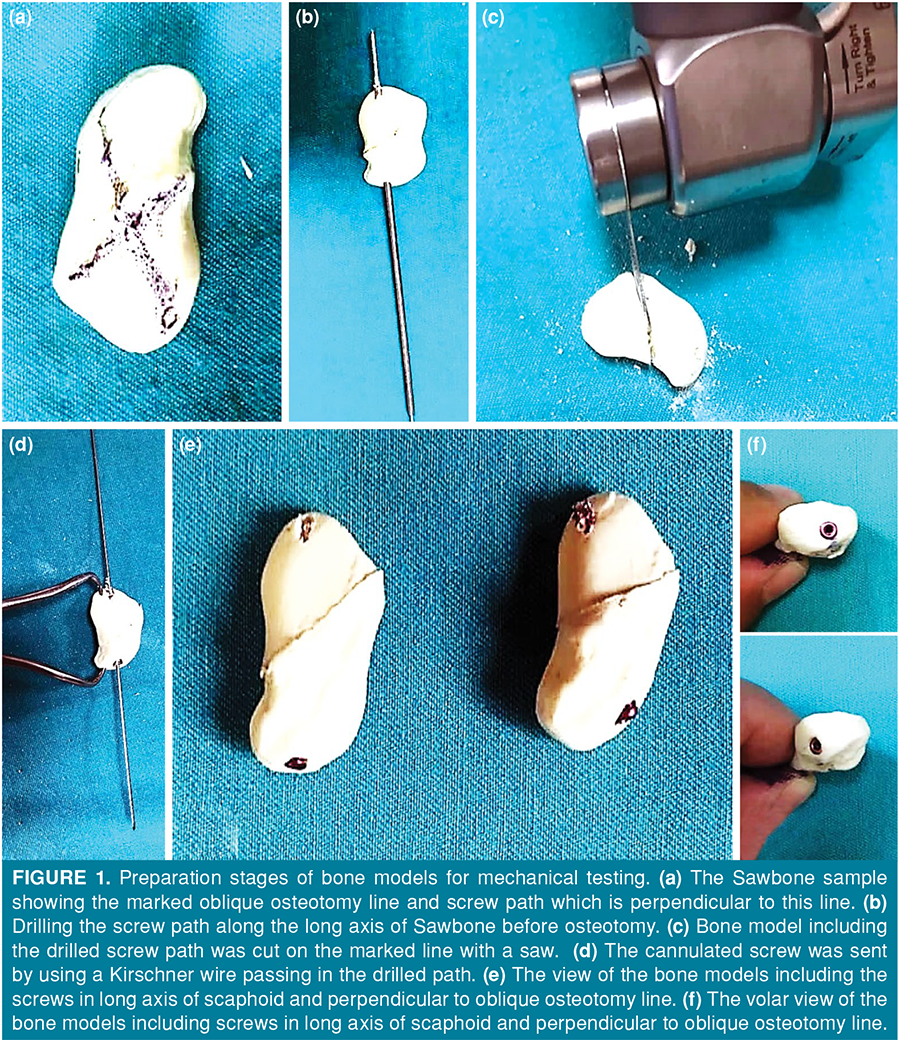 To simulate normal physiological loads which scaphoid bone encounters in a wrist held in the neutral position, all bone models’ fracture lines were positioned at a 45-degree angle to the horizontal plane of the testing machine. Thus, the delivery of dorsal to volar cantilever load was obtained on bone models.[4-9,16] All samples were fixed to the holder of testing machine from their proximal poles (Figure 2a). Load was applied to the bone models perpendicular to the ground plane through a mechanical testing machine (Shimadzu AG-I 10KN/Kyoto, Japan) from the distal pole of the scaphoid (Figure 2b). The velocity of force applied by the machine is 20 mm/min. By increasing the load through the test machine, the amount of force causing 2-mm displacement and failure in the samples was calculated (Figure 3). The force resulting failure was defined as the maximum force that occurred before the anchoring structure was broken. In addition, the maximum displacement values at the failure point were measured by the test device. 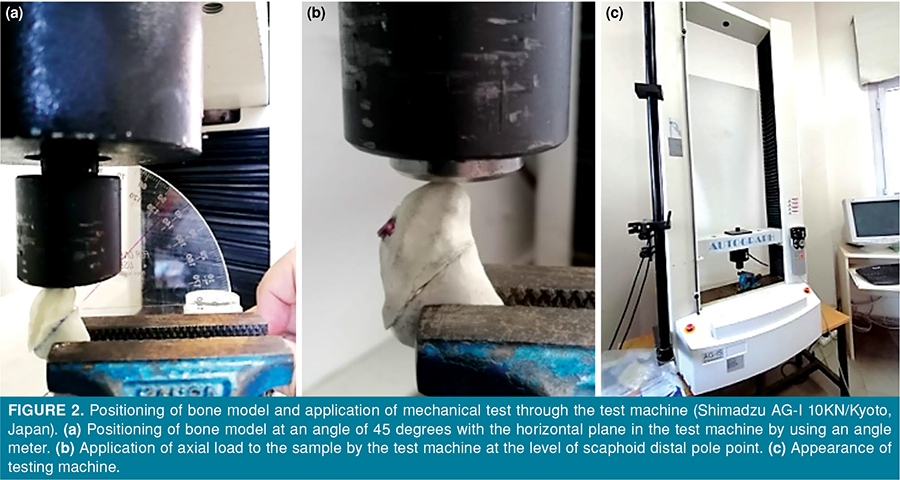 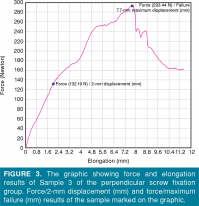 Figure 3. The graphic showing force and elongation results of Sample 3 of the perpendicular screw fixation group. Force/2-mm displacement (mm) and force/maximum failure (mm) results of the sample marked on the graphic.
× 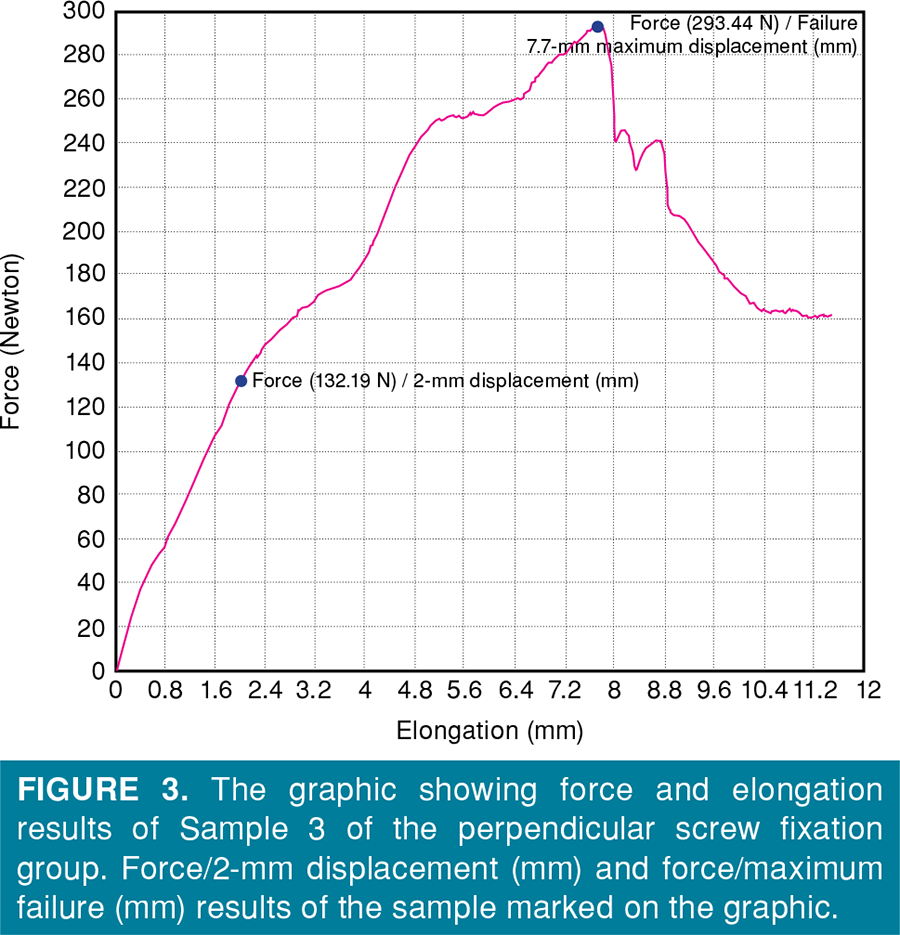 Statistical analysis was performed using the IBM SPSS version 22.0 software (IBM Corp., Armonk, NY, USA). Descriptive data were expressed in mean ± standard deviation (SD). The conformity of the variables to the normal distribution was evaluated using the Kolmogorov-Smirnov test and all variables were found to be normally distributed. The Student t-test was used for comparisons of data between the two groups. A p value of <0.05 was considered statistically significant.

A total of seven composite scaphoid bone models were used in both groups. The results in each group were summarized in Tables I and II. The average force required to create 2-mm displacement was measured 219.93 N in the PSF group, while this value was 260.71 N in the long axis screw fixation (LASF) group. There was no statistically significant difference between the two groups in terms of force measurements required to create 2-mm displacement on the osteotomy site (p>0.05).

Table 1. Results of the perpendicular screw fixation samples including the force required for 2-mm displacement and failure on the fracture site, maximum displacement amounts, and statistical results
×

The average force required to cause failure in the group in which screws were sent perpendicular to the fracture line was found to be 323.24 N, while the value of this measurement was 342.50 N for centrally placed LASF group. There was no statistically significant difference between the two groups in terms of force required to cause failure (p>0.05).

In our study, both groups provided a similar amount of resistance against axial force until 2-mm displacement. Comparing our results with a previous study performed by McCalister et al.[5] on cadaveric scaphoid bones with transverse fractures, it was observed that, in contrast to our findings, they achieved better results in the LASF group. The main reason for these differences between the two studies may be due to the dissimilar fracture types and material differences between cadaveric bones and sawbones. In the present study, we chose Sawbones, as they have the same size and density volume. Artificial bones have a similar elastic modulus, compressive strain values and stiffness, compared to the normal bone.[17] In our study, no significant difference was found between the two groups in terms of resistance against axial force until failure point. Comparing our results with similar previous studies in terms of resistance against axial force until failure point, we observed the same results. Luria et al.[18,19] showed in their studies that perpendicular fixation provided as much stability as LASF. Faucher et al.[4] also found similar results to our findings in their cadaveric study.

In terms of maximum displacement seen at the failure point, we found no significant difference between the two groups. Our results are consistent with the previous study findings of Luria et al.[18] In their study, the same length of screws with 21.5 mm was used for both fixation types and they achieved better results with the perpendicular fixation method, compared to LASF. In order to achieve accurate data, we first aimed to eliminate other factors such as bone quality, fracture geometry, fracture reduction and choice of implant affecting mechanical effectiveness of internal fixation, and we primarily focused on implant placement. Thus, we preferred to use composite bone models. Many recent studies have argued that composite bone models can mimic the properties of human bones and used as alternative testing media to human cadaveric bone.[20-22] Furthermore, the similar oblique osteotomies were created on those composite bones and the same fixation materials were applied to the samples. Thus, we obtained reproducible testing materials.

Finite element analysis and preliminary clinical results in scaphoid nonunion by screw fixation were previously published in the literature, and correlation between the results were shown.[2] In this study, we assumed that screwing in perpendicular position to the fracture would be most appropriate according to Arbeitsgemeinschaft für Osteosynthesefragen (AO) principles. Therefore, we believe that the screwing method should be in accordance with the AO principles, particularly in oblique fractures where short screwing is possible with volar and dorsal surgical approaches. It has been shown that perpendicular screwing is better for fracture treatment.[4]

Nonetheless, this study has several limitations. First, although composite bones are able to mimic normal human bones, it is difficult to simulate the in vivo conditions of human scaphoid. Additionally, only axial loading was applied to the samples due to the inability of applying torsional and bending forces of mechanical testing machine used in this study. However, scaphoid fractures are subjected to continuous shearing and bending forces during recovery. When we examined the test results in detail for each group, we found no significant correlation between the applied force and displacement. Finally, the number of composite bone samples could be more than seven to achieve more accurate data for this mechanical study.

In conclusion, according to our study findings, screw fixation perpendicular to the fracture line provided as much stability as LASF in terms of durability against axial loads on oblique scaphoid fracture models on composite bones. Future studies including more bone models and cyclic loads may yield more accurate results.