Sesamoid bones of the hand: A multicenter study

Objectives: This study aims to document a detailed investigation on the sesamoid bones (SBs) of Turkish subjects from different parts of Turkey in a multi-center study, in both hands, according to gender, frequency and divisions of the bones’ coexistence and bilaterality by radiography.

Patients and methods: This retrospective and three-centered study was performed between June 2010 and April 2012. Sesamoid bones were examined by anteroposterior and oblique X-rays of 1,444 hands of 772 subjects (367 males, 405 females; mean age 42.7 years; range, 18 to 87 years). All X-rays were evaluated by at least two independent observers. In controversial circumstances, at least three observers together gave the final decision by consensus.

Conclusion: The distribution of SBs varies according to hand regions, gender, and side. Having knowledge of the locations and the rate of bilaterality of SBs may assist clinicians in both clinical and radiological diagnoses.

Sesamoid bones (SBs) are the skeletal variations of the hand and foot that were first described by Galen.[1] They are mostly located on the hands and feet region; they can be found under the tendon passing over the joint. However, they can also be found in other locations such as the largest sesamoid-patella, pisiform in the wrist, and fabella in the knee.

Two main hypotheses have been described for the SB development: functional and phylogenetic.[2-4] In 2018, Yammine[5] added a new hyperextension hypothesis to these two hypotheses and explained the frequency of sesamoids in human digits. There is still no consensus concerning the function of the sesamoids. They are part of a gliding mechanism. Sesamoids function by reducing the friction and modifying the pressure. They also change the direction of the muscle’s force and protect the tendon.[6]

Sesamoid bone is a frequent finding in routine radiographs of the hand. Unfortunately, pathological conditions of the SB are usually overlooked. Physicians focus on the larger osseous structures and even the most common disorders of the SB (fracture, dislocations, arthritic, inflammatory and degenerative disorders) may be misdiagnosed. Trauma and degenerative disorders have been listed as the most common pathologic conditions of the SB.[7]

In this study, we aimed to document a detailed investigation on the SBs of Turkish subjects from different parts of Turkey in a multi-center study, in both hands, according to gender, frequency and divisions of the bones’ coexistence and bilaterality by radiography. 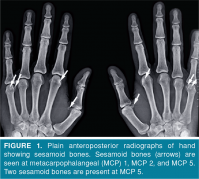 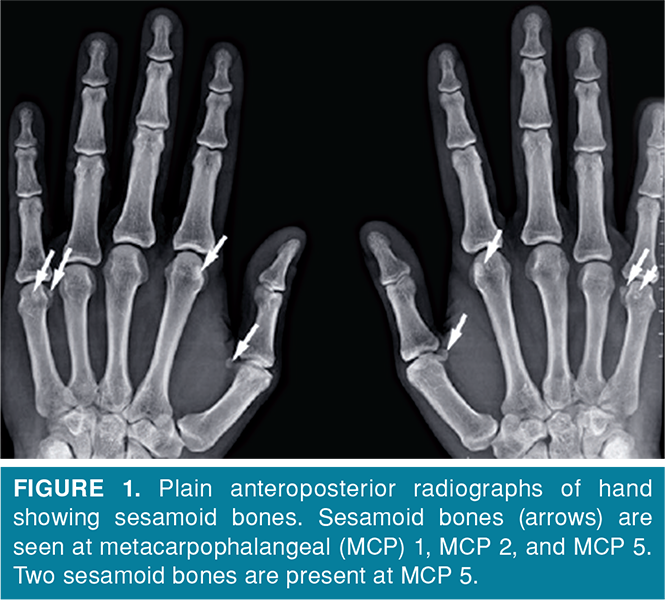 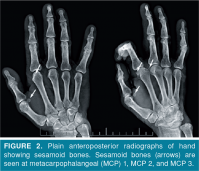 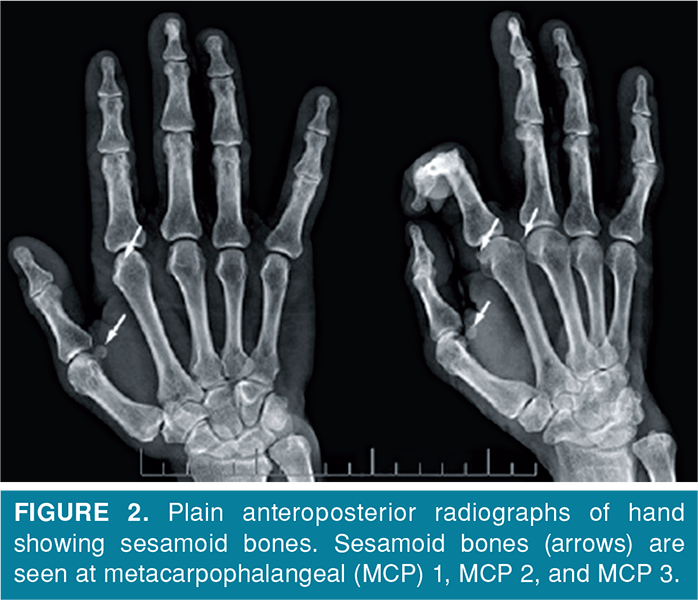 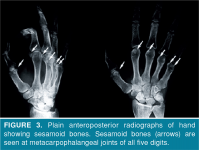 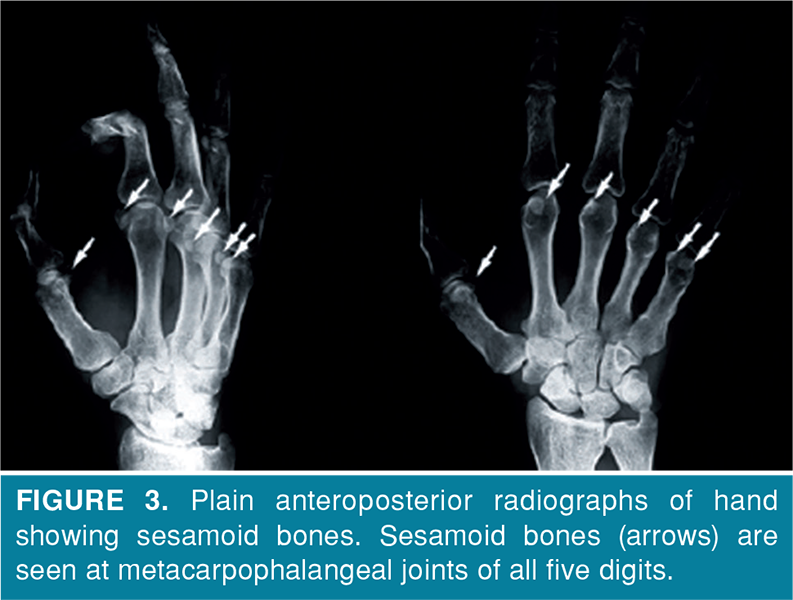 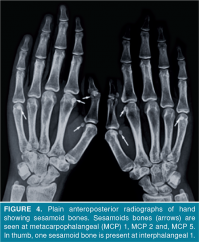 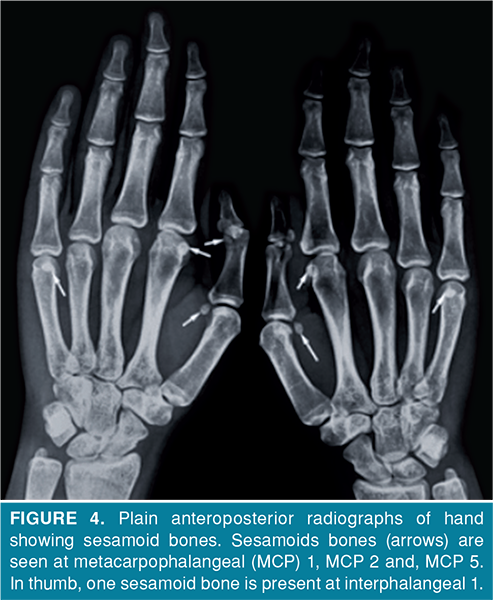 Table 1. Prevalence (%) and distribution of sesamoid bones of hand region
×

Kose et al.[13] published the first sesamoid prevalence and a large series about the SB of Turkish hands. They reported 100% for MCP 1 sesamoids, 21.3% for IP 1, 36.6% for MCP 2, 53.2% for MCP 5, 1.3% for MCP 3, and 0.9% for MCP 4.[13] Their results for MCP 1, IP 1, MCP 3, and MCP 4 were similar to our findings. However, results for the other areas were different. In that study, authors did not indicate the center where the research was conducted and the part of Turkey from where they obtained the radiographs. As Turkey is a large country with a heterogeneous structure, their results may be considered questionable. In the present study, 1,444 radiographs of 772 Turkish subjects’ bilateral hands from different parts of Turkey were investigated.[14]

Sesamoid bones of the thumb are also useful in the diagnosis of systemic diseases and they are an indicator of pubertal growth. Enlargement of the thumb sesamoid is a feature of acromegaly.[8,15,16] Descriptive anatomy of the thumb sesamoids has been examined in detail. They can appear as a bony formation in one hand and may be larger in the other hand and can appear like a fibrocartilaginous nucleus on the other side.[3] The volar plate of the MCP involves both of the SBs. Bipartism of the thumb sesamoids was reported in rare cases; Pfitzner (cited by Fawcett, 1896)[17] reported different bipartite SBs of MCP and IP joints. There are reports of three cases of isolated absence of the radial bone of MCP joint, and the absence of one or both sesamoids in the MCP joint of the thumb is exceptional.[3,17] There are few reports of a possible association between sesamoid frequency and ossification period of sesamoids.[10,18] With regard to SB in the digits of the hand in other studies[9,10,19] as in the present study, two SBs were seen on palmar side of the MCP joint of the thumb in all of the 1,444 hands of the 772 subjects. In our subjects, no bipartism of the thumb sesamoids was detected.

The sesamoid of the second finger, if present, is usually located on the radial side of the volar plate of the MCP joint.[3,12,17] No intrinsic muscles are attached to the sesamoid of the second finger unlike the thumb. A sesamoid is always located in the radial side of the medius and on the ulnar side if present in the fourth finger.[12,17] The reported prevalence at other locations ranges from 3.6 to 64%, 0 to 5.3%, 0 to 7.1%, and 0 to 76.5% at MCP 2, MCP 3, MCP 4, and MCP 5, respectively.[3,9,10,12,18,19] The 40.4% SB frequency of MCP 2 in Arab subjects is similar to the 35-64% reported in Caucasians.[3,12] Similarly, the 45.3% incidence of SB in the MCP 5 in the Arab population is comparable to that reported in Caucasians (44.6-76.5%).[3] Thus, the prevalence of SB in the index and little fingers in the Arab population seems to be similar to that in Caucasians, albeit close to the lower side of the frequency range. Although SBs have been described as being rare, or occurring infrequently[9,10] in the MCP joints of the middle and ring fingers, Bizarro[3] has reported a frequency of 7.1% at each of these sites in Caucasians, while the gender of the subjects were not mentioned. Dharap et al.[10] reported that the incidence of sesamoids at these two digits in the Arab population of Bahraini was found much lower: 2.3% in the third and 1.5% in the fourth fingers, respectively. In the present study, the prevalence of SB in the MCP joints of the hands were 42.8%, 1.6%, 0.1%, and 72.5% at MCP 2, MCP of the medius (MCP 3), MCP 4, and MCP 5, respectively. Moreover, we detected some statistically significant differences between males and females. Sesamoid bones of the MCP 2, MCP 5, and IP 1 were recorded statistically significantly more frequently in females (p=0.018, p=0.014, and p=0.003, respectively).

The sesamoid of the IP joint of the thumb is usually single and one single case of a double SB was reported by Bizarro.[3] The incidence of SB in the IP 1 has been reported to be 100% in Africans[19] and between 73% and 100% in Caucasians.[12,20] According to all reports, this particular incidence differs greatly from that observed in the available literature, which may give rise to thought about racial variation.

This study has some limitations. Turkey is a big and multicultural country. All of the regions have different ethnic groups. We wanted to minimize the problems due to differences of the ethnics by selecting three different region of Turkey. New studies including all of seven regions of Turkey would be more interesting.

In conclusion, the present study represents a detailed report with particular emphasis on the prevalence of SB of the hand in Turkish subjects from different parts of Turkey. The distribution of SBs varies according to hand regions, gender, and side. Thus, the locations of SBs and the rate of bilaterality may assist clinicians in both clinical and radiological diagnoses.