Objectives: This study aims to compare the radiological outcomes of unicompartmental knee arthroplasty (UKA) performed by a navigation-based robotic system versus Microplasty® instrumentation.

Patients and methods: Between January 2018 and January 2019, a total of 90 knees of 75 patients (65 males, 10 females; mean age: 62.0±9.4 years; range, 50 to 73 years) were included. Among these, 54 knees underwent Oxford mobile-bearing UKA with an Microplasty® instrumentation set and 36 knees were operated with the aid of a Restoris® MCK with MAKO navigation-based robotic system. Postoperative anteroposterior and lateral X-rays of all patients were evaluated according to nine different parameters. On the femoral side, femoral varus-valgus angle, flexion-extension angle, femoral condyle posterior fit; on tibial side, tibial component varus/valgus, tibial posterior slope, medial, anterior, posterior and lateral fit of tibial component assessed.

Unicompartmental knee arthroplasty (UKA) is an effective treatment for anteromedial osteoarthritis of knee. It has certain advantages over total knee arthroplasty including faster recovery times, reduced perioperative morbidity and mortality, and improved return periods to work or sports.[1-3] With the help of strict patient selection criteria, advances in surgical techniques such as using intramedullary guides for condylar component positioning, improved implant and instrumentation designs, better polymer material processing and other factors, the literature indicates a five-year cumulative survival rate of UKAs ranging from 98.7 to 100% and a 10-year survival rate of 92 to 97.4%.[4] However, UKA is considered to be technically challenging to perform by many orthopedic surgeons. It has been shown that improper limb or implant alignment is the primary cause of early UKA failure associated with aseptic implant loosening, excessive polyethylene wear, and disease progression in the non-involved compartment.[5,6]

Recent advances in navigation and robotics may provide a useful tool to assist the surgeon in planning the operation and increasing the accuracy of intraoperative placement of implants. Unicompartmental knee arthroplasty is one of the surgeries best suited for this type of technology, since it uses a relatively small implant and requires complex surgical planning and challenging bone preparation.[7] Based on a pre-planned cutting volume, surgeon can freely move the bone with a tactile robot and robot allows the surgeon to remove out of that volume. Dynamic-referencing tactile-guidance robotic systems use optical motion capturing technology which dynamically tracts femur and tibia via marker arrays fixed on them. This allows the surgeon to adjust limb position and orientation freely during bone cutting. These robot-assisted surgical techniques have been shown to improve implant placement following UKA compared to conventional manual techniques utilizing improved bone preparation.[8] However, the main concerns of robotic systems are prolonged operation time, high installation cost, and additional radiation exposure time with image-based systems, particularly in low-volume centers performing under 100 UKA per year.[9,10]

The Oxford UKA, which is the most commonly performed UKA, has demonstrated excellent functional outcomes and long-term survival by the Oxford group.[11] A new instrumentation known as Microplasty® (Zimmer Biomet, Bridgerd, United Kingdom) was introduced in 2011 to make surgery easier and improve the reproducibility of component positioning. The instrumentation has a stylus system to ensure a more consistent tibial resection level, a femoral drill guide linked to an intramedullary rod to improve femoral orientation, and slotted saw guides.[12,13] It has been shown that Microplasty® instrumentation for Oxford mobile-bearing UKA is more accurate and precise compared to both the conventional fixed-bearing UKA and the phase III instrumentation of Oxford UKA.[14,15]

This single-center, retrospective, cross-sectional study was conducted at Istinye University, Department of Orthopedics and Traumatology, between January 2018 and January 2019. Radiological images of the patients who underwent UKA were examined utilizing hospital Picture Archiving and Communication Systems (Synapse 3D® software; Fujifilm Medical, Tokyo, Japan). There were 82 patients and a total of 102 knees were operated during this period. Patients with previous limb surgery, hip replacement and knee arthrosis due to previous trauma were excluded from the study. Patients with lateral UKA and medial UKA with patellofemoral resurfacing arthroplasty were also excluded. Additionally, suboptimal images that were not suitable for evaluation were excluded. Finally, a total of 90 knees of 75 patients (65 males, 10 females; mean age: 62.0±9.4 years; range, 50 to 73 years) were included in the study (Figure 1). Among these, 54 knees underwent Oxford mobile-bearing UKA with an Microplasty® instrumentation set (Zimmer Biomet, Bridgerd, United Kingdom), and 36 knees were operated with the aid of a Restoris® MCK with MAKO navigation-based robotic system (Restoris MCK/w MAKO Stryker Orthopaedics, Kalamazoo, MI, USA). All operations were carried out by two experienced surgeons who perform over 50 UKA cases per year over the last five years. 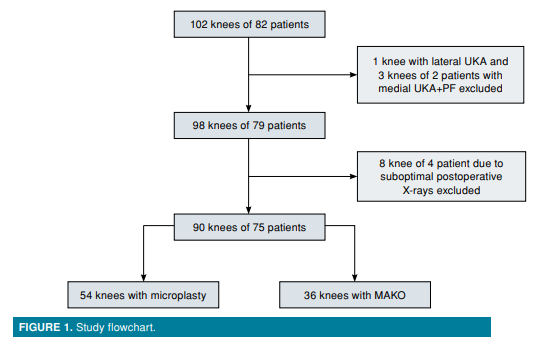 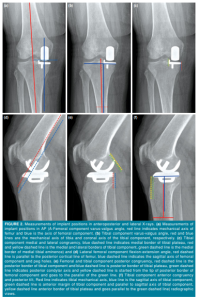 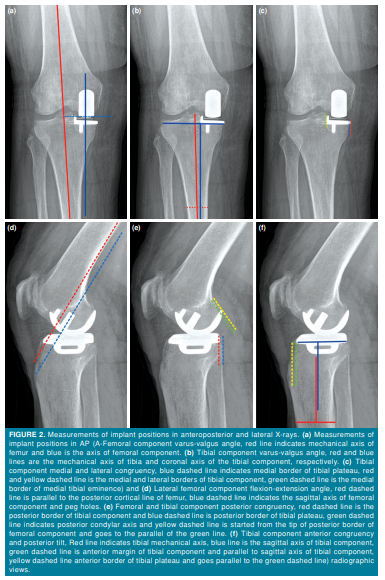 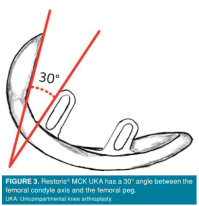 Figure 3. Restoris® MCK UKA has a 30° angle between the femoral condyle axis and the femoral peg. UKA: Unicompartmental knee arthroplasty.
× 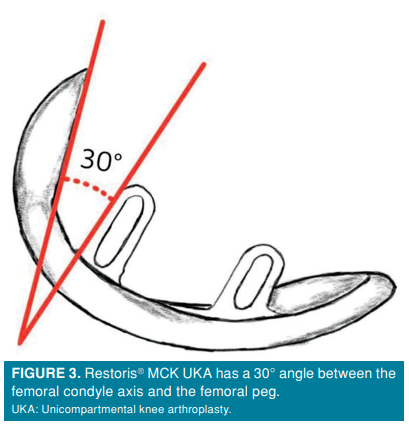 According to the manufacturer’s surgical technique guide of Oxford Partial Knee, there are values that are accepted as in the range and literature with robotic navigation systems which mainly evaluates whether they are within the desired position versus implanted position. As the main objective of this study was to compare the radiological results in terms of normal anatomy, we attempted to provide the exact values rather than putting them in groups of a normal range.

There were 34 right knees and 20 left knees in the Microplasty® group, whereas 21 right and 15 left knees were included in the MAKO group (p=0.572). Both groups had similar baseline data.

There were nine different parameters considered in all the AP and lateral X-rays. On the femoral side, there was no significant deference between the two groups in terms of femoral varus/valgus angle, flexion/extension angle, and posterior fit (p=0.063, p=0.375 and p=0.071, respectively) (Table I). On the tibial side, however, tibial component medial fit (p=0.032) and anterior fit (p=0.007) were better in the MAKO group. There were no significant differences in the other measurements (Table I).

Table 2. Results of the measurements
×

It was shown by Cobb et al.[17] that, with a robotic technique, implant positioning in the coronal plane was within 2° of the computed tomography plan for all cases, whereas with the use of conventional techniques it was within 2° of the computed tomography plan in only 40% of the cases. In this study conducted in 2016, Cobb et al.[17] used an older version of the Oxford UKA. Following the release of Microplasty® instrumentation, Ng et al.[15] showed that it was more accurate and precise compared to conventional fixed-bearing UKA in sagittal, coronal, and axial alignment. The femoral drill guide linked to an intramedullary rod and a stylus system for tibial cut improved the femoral orientation and slotted saw guides of tibia, resulting in a more accurate implant positioning. In our study, we compared the Microplasty® instrumentation with the navigation-tracked tactile robotic system MAKO, and we found no significant difference in component positioning on the femoral side, although the results slightly favored the MAKO in terms of varus-valgus positioning. Also, there was no significant difference in the tibial component alignment, except for the medial and anterior fit. This difference between the two different UKA designs could be due to different sizing options of Oxford UKA with Restoris® UKA tibial base plate: there were seven sizes in the Oxford UKA and eight in the Restoris® UKA.

Postoperative mechanical axis alignments with 8° of varus or more and varus under corrections of 5° are associated with significantly high polyethylene wear rates and revisions.[18,19] However, even an overcorrection changing the mechanical axes from varus to valgus indicates significantly a higher risk of lateral compartment degeneration and cartilage wear rates.[18] High tibial slopes over 7° is associated with the increased loosing rates.[20] Consequently, to minimize the early implant failure and polyethylene wear, over- and undercorrections should be avoided. The target for the navigated specification of mechanical alignment must be 0° with a 2° to 3° tolerance. Dunbar et al.[21] reported averaged placement errors of 1.6 mm/3° along any single axis for femoral component and 1.5 mm/2.6° along any single axis for the tibial component using a tactile-guided robotic system from MAKO surgical group in 20 knees. Lonner et al.[22] examined an image-free navigation system on cadavers and obtained results with an accuracy in the ranges of 0.8 mm to 1.3 mm of translation and 1° to 2° of alignment in all planes both in femoral and tibial components. Similarly, Khare et al.[23] compared a navigated robotic system with conventional methods and found that maximum femoral implant orientation error was less than 2.81° for the robotically navigated approach and less than 7.52° for the conventional approach, while on the tibial side the implant orientation error was 2.96° to 4.06°, favoring the navigational approach. Cobb et al.[17] compared a conventional method with an image-free navigated system instrumentation and found more accurate positioning in both components with robotic system; however, they reported longer operation times and three complications out of 13 knees in case of robotic system, as opposed to only one complication out of 15 knees in the conventional group. However, Jenny et al.[24] compared 60 UKA operated with minimally invasive surgery with 60 navigation-guided surgery and found no significant difference between the rates of patients in both groups’ achieving the desired implant position.

The experience of surgeon is also an important factor for component alignment. An experienced surgeon can achieve 66% component alignment within the preoperative target, exceeding published values in a study comparing robotics (58%) with manual (41%) UKA.[25,26] All the operations in our study were performed by two experienced surgeons. This can be the reason that the results can be comparative in two systems.

Despite many reports of robotic systems increasing the proper implant positions, there are still concerns about these systems. These computed tomography-based systems align the components using a three-dimensional visualization, yet they fail to incorporate soft tissue tension into planning, such as gap kinematics. Besides, their utility significantly increases the operation duration, including a set-up time of the robotic system which is held by a specialized technician.[8]

Nonetheless, there are some limitations to this study. First, since this is a one-year, cross sectional study, the number of patients included in the robotic group is relatively small and, thus, the effect of component positions on clinical results was unable to be analyzed. Second, our study only aims to compare radiological implant position, which may not represent the functional status of patients and patient satisfaction. When we analyzed the power of the study according to femoral component varus-valgus alignment, the power of the study turned out to be 88%. Furthermore, we compared two different implant designs, but made corrections to match each other.

The main strength of this study is that all operations were performed by two senior surgeons who are highly experienced in performing UKA with high caseloads. Overall, we show that Microplasty® instrumentation may lead to comparable implant positioning compared to a tactile-based navigated robotic instrumentation.

In conclusion, accurate implant alignment is important in UKA. Our study results indicate that Microplasty® instrumentation is associated with comparable implant positioning compared to a tactile-based navigated robotic instrumentation in experienced hands. Nevertheless, further large-scale, well-designed studies are needed to confirm these findings.

The study protocol was approved by the Istinye University Ethics Committee (date: 2/2020 no: K432). The study was conducted in accordance with the principles of the Declaration of Helsinki.