Objectives: This study aims to compare clinical and radiological follow-up results of a rectangular (SL-Plus®) or a round (Synergy®) femoral component in patients with Crowe type 2 or 3 hip dysplasia operated with total hip arthroplasty (THA) without a shortening osteotomy.

Results: The mean follow-up was 61.3±27.2 months. The mean postoperative HHS was 89.3±6.2 vs. 93.1±9.1, and the mean VAS score 1±0.6 vs. 1±0.8 in round and rectangular stem groups at the final follow-up. No significant differences were detected between the groups in any of the evaluated parameters, except for a more severe degree of stress shielding observed in the round stem group. Round stem size was positively correlated with a more severe stress shielding (r=0.55, p=0.020). No patient had to be revised during the follow-up period. The overall complication rate was 9%.

Conclusion: Successful and comparable results can be obtained with cementless THA in patients with high riding dysplastic hips implanting either of the femoral components, a rectangular or a round stem. Although the round stem was associated with more common proximal stress shielding, this was not associated with worse clinical outcomes.

Dysplastic femurs differ in most of the anatomic parameters compared to healthy controls, in particular, Crowe type 2 and 3 hips.[1] Although a shortening osteotomy is mostly indispensable for high riding hips,[2] a less severe displacement of femoral head as in Crowe type 2 or 3 may be addressed successfully with THA without a shortening osteotomy.[3] Dysplasia and superior migration of the femoral head make the surgical application of THA challenging in these patients. Previous studies have investigated different femoral stem options in mixed types of dysplasia cohorts or solely in osteotomized hips.[4,5]

Rectangular and round stems have been shown to provide successful long-term survival in THA both in primary coxarthrosis or dysplastic hips.[2,6] Rectangular implants bear the advantage of less intramedullary bone removal and early inherent implant stability with four-point rotational stability.[7] On the other hand, round, double tapered, and fluted stems were also shown to provide excellent clinical and radiological results,[3] although a former study documented high-grade stress shielding on long-term follow-up in a dysplastic coxarthrosis cohort.[8]

In the present study, we aimed to examine whether clinical or radiological results favored one of the femoral components, either rectangular (SL-Plus®, Smith&Nephew, Memphis, TN) or round (Synergy®, Smith&Nephew, Memphis, TN) stem in Crowe type 2 or 3 dysplastic hips operated on with THA without a shortening osteotomy. We, therefore, hypothesized that there would be no difference between the groups in neither clinical nor radiological outcome parameters.

This single-center, retrospective study was conducted at Istanbul University-Cerrahpaşa, Cerrahpaşa Faculty of Medicine, Department of Orthopedics and Traumatology between January 2012 and December 2017. All patients with a Crowe type 2 and 3 hips who received THA using either of the femoral components without a shortening osteotomy were reviewed. A total of 44 patients were collected. Patients with a prior pelvic or proximal femoral operation (n=5), or who underwent another lower extremity operation (n=3) were excluded. A total of 17 hips of 15 patients operated on with the round stem were detected. Following 1:1 matching of patients using sex, body mass index, Crowe type and preoperative Harris Hip Score (HHS), and Visual Analog Scale (VAS) for activity pain using nearest neighbor matching, a total of 34 hips of 30 female patients (mean age: 42.9±11.6 years; range, 24 to 66 years) were included in this study.

All patients were operated by a single team led by an experienced high-load hip surgeon using the same technique. An anterolateral hip approach was used in lateral decubitus position. Anatomical cup placement was aimed but not succeeded in all hips as dictated by the bone stock of the acetabulum. Either the rectangular (Group 1, n=17 hips of 15 patients) or round (Group 2, n=17 hips of 15 patients) stem was implanted (Figure 1). The HHS and VAS scores for activity pain were obtained from all patients pre- and postoperatively. Operative time and intraoperative blood loss for both groups were compared. The radiographical evaluation criteria included leg length discrepancy, stem subsidence, bone atrophy or hypertrophy around the stem according to Gruen zones,[9] and degree of stress shielding according to Engh et al.[10] Stem sizes for all patients were listed and correlation analysis of radiological, clinical findings, and stem sizes was executed. 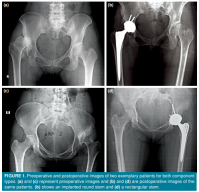 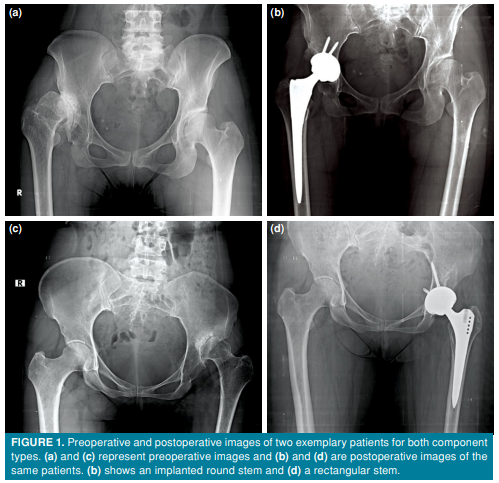 Three patients in both groups had hips of Crowe type 2. Patient demographics are shown in Table I. The mean follow-up was 61.3±27.2 (range, 26 to 107) months. Clinical scores changed significantly from pre- to postoperative latest follow-up (Table II). No significant difference was observed between the groups for either pre- or postoperative scores.

Operative time was slightly shorter in Group 1 and intraoperative blood loss was different between the groups, although it did not reach statistical significance (Table III). Bone atrophy and hypertrophy distribution according to Gruen zones are illustrated in Figure 2.

Table 3. Comparison of different parameters between the groups
×

Figure 2. Distribution of atrophy and hypertrophy according to Gruen zones. Left side illustrates the rectangular component and right side the round component.
× 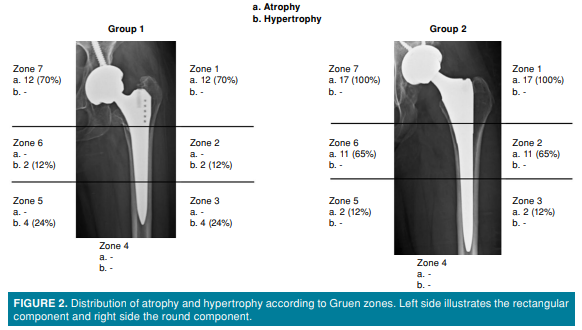 Figure 3. Number of used component sizes for both components.
×

Table 4. Degree of stress shielding according to Engh et al.[10]
× 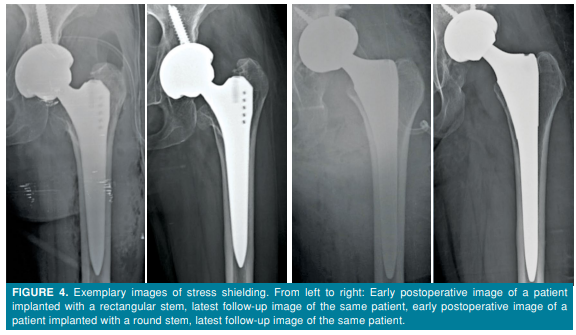 Stem size was positively correlated with the degree of stress shielding in Group 2 (r=0.55, p=0.020). A larger implant was associated with a more severe stress shielding, when a round stem was implanted.

One intraoperative fracture (6%) occurred in Group 2, and two nerve palsies versus one in Group 1. In total, the complication rate was 9% in the entire cohort. No reoperations or revisions were undertaken during follow-up.

This study showed that either of the femoral components, rectangular or round profile, yielded successful clinical and radiological results at a mean of five years follow-up. The metaphyseal sitting, round prosthesis was shown to sit more distally on the diaphyseal region in this patient cohort, resulting in more severe stress shielding. However, more severe stress shielding was not associated with worse clinical outcomes.

The rectangular profile stem was previously shown to yield excellent clinical and radiological results in primary coxarthrosis related THA.[11,12] Similarly, the Synergy® stem was related to excellent results in primary THA after 15 years of follow-up.[6] However, dysplastic hips are known to differ in some anatomic femur parameters from healthy hips. A previous study showed that Crowe type 2 and 3 hips were to differ in the most number of anatomic parameters from healthy controls, compared to Crowe type 1 or 4 hips.[1] Therefore, it is of interest to examine the arthroplasty results in these patients separately from other dysplasia types. Previous studies either included mixed dysplasia types in one cohort or solely osteotomized Crowe type 3 and 4 hips.[4,5,8] A shortening osteotomy is another confounding factor in previous studies, similar to implanted different stems. Only a limited number of studies exist on hips of Crowe type 2 and 3 without a shortening osteotomy using a determined stem type.[3]

Excellent results from previous studies[6,12,13] cemented the use of SL-Plus® and Synergy® stems in dysplastic hips.[2,3] Although a previous study indicated that round and tapered stem had less favorable clinical results compared to cylindrical stem in Crowe type 4 hips undergoing a step-cut osteotomy,[14] the round stem was shown to yield excellent results in Crowe type 2 and 3 hips in another study.[3] The authors reported complication-free results with a minimum of 10 years follow-up implanting the Synergy® component in a patient cohort of Crowe type 2 and 3 hips.

No revisions or reoperations were undertaken in this cohort, and the overall complication rate was 9%. These results are similar to those in the literature.[3,8]

Nonetheless, there are some limitations to this study. First, the sample size is small; however, it is a unique study with its comparative design on a limited and relatively homogenous patient group with Crowe type 2 or 3 dysplastic hips. The results must be read under the risk of statistical underpower. Second, retrospective analysis is born to its respective biases; however, the senior surgeon was neutral to stem type and was involved in all cases; therefore, a performance bias is limited. Radiological examinations were not serial and clinical scores were not collected regularly at even intervals, which limits the analysis on radiological changes over time and their corresponding clinical effect, if there are any.

In conclusion, the investigated rectangular and round stem designs were shown to yield comparable and successful midterm radiological and clinical results in Crowe type 2 and 3 hips operated with THA without a shortening osteotomy. More severe stress shielding was observed in the round stem-group at an increasing rate, when a larger implant was used. However, this was not associated with worse clinical results.

Istanbul UniversityCerrahpaşa Cerrahpaşa Faculty of Medicine Ethics Committee (No: 83045809-604.01.02). The study was conducted in accordance with the principles of the Declaration of Helsinki.