Conclusion: Based on our study results, we suggest to use IC-NBG for scaphoid waist nonunion as the primary procedure, as the union rates are comparable with the MFC and 1,2-ICSRA-VBG techniques and it has advantages such as shorter operation time, easier technique, no special experience requirement, and better functional outcomes.

Scaphoid fractures represent 50 to 80% of all carpal fractures, with the greatest incidence among young and active males.[1-3] A scaphoid nonunion (SN) is defined as an unhealed fracture six months after injury and the nonunion rate after a scaphoid fracture is relatively high. Numerous bone grafting techniques have been proposed for the treatment of SN. The differences between these techniques include the harvest site of the bone graft and the use of a vascularized bone graft (VBG) or a non-vascularized bone graft (NVBG).[4] Vascularized bone grafts, such as the 1,2-intercompartmental supraretinacular artery pedicled VBG (1,2-ICSRA-VBG), the volar carpal artery pedicled flap, the pronator quadratus (PQ) pedicled flap and the free medial femoral condyle (MFC) graft have become increasingly popular in the treatment of SN.[4-6] 1,2-ICSRA-VBG method was first used in 1991 by Zaidemberg et al.[7] and was the most commonly used method in recent times. The use of MFC was first described by Doi et al.[8] who reported successful union rates in all 10 patients at an average of 12 weeks after the procedure.

Although treatment strategies for SN remain controversial, conventional NVBGs, such as iliac crest non-vascularized bone graft (IC-NBG) are still commonly performed.[9-11] However, the comparison of vascularized versus NVBG for the treatment of SN is limited.[12,13] In the present study, we aimed to analyze scaphoid waist nonunion patients who had no avascular necrosis and no prior surgical treatment for scaphoid fracture and were treated with a vascularized (1,2-ICSRA-VBG and MFC) and NVBG (IC-NBG).

This single-center, retrospective study was conducted at Istanbul Haydarpaşa Numune Training and Research Hospital, Department of Orthopedics and Traumatology between January 2016 and February 2020. Inclusion criteria were as follows: scaphoid waist nonunion diagnosed by computed tomography (CT) and X-ray; treatment with vascularized (1,2-ICSRA-VBG and MFC) or non-vascularized (IC-NBG) bone graft; at least oneyear of postoperative follow-up. Exclusion criteria were as follows: loss to follow-up; having other injury at the ipsilateral extremity or contralateral upper extremity; having caused by pathological fractures or open fracture. Patients who met the inclusion criteria were called by phone: seven patients could not be reached and five patients did not attend. Finally, a total of 24 patients (22 males, 2 females; mean age: 30.6±9.4 years; range, 18 to 66 years) were included. A written informed consent was obtained from each patient. The study protocol was approved by the Istanbul Haydarpasa Numune Training and Research Hospital Ethics Committee (No. HNEAH-KAEK 2021/KK/90 Istanbul, Turkey). The study was conducted in accordance with the principles of the Declaration of Helsinki.

Eight scaphoid waist nonunions were treated with a vascularized distal radial bone graft based on 1,2-ICSRA-VBG pedicle (Figure 1). A longitudinal incision was made on the radiodorsal side of the wrist. The longitudinal course of the irrigating vessel was easily seen over the distal radius. A VBG was placed and this perfusing periosteal blood vessel was centered over the bone to be harvested. Next, the nonunion of the scaphoid was visualized and the sclerotic bone ends were refreshed. A bone graft was, then, taken from the distal radius, lying under the vascular pedicle, and its size corresponded to the cavity created in the scaphoid.

Seven scaphoid waist nonunions were treated with MFC bone graft (Figure 2). A medial incision was made over the MFC. The descending genicular vessels were located proximally on the floor of the muscle compartment and distally on the MFC. After identifying the vessels to be used as pedicles on the medial condyle, the graft was outlined on the periosteum. A standard volar Russe approach was applied to the scaphoid. Fibrous tissues in the nonunion field were resected, and the sclerotic bone ends were refreshed. The harvested MFC graft, which was larger than the defect, was formed into a wedge or trapezoid shape, trimmed and placed in the defect. The descending genicular artery was anastomosed to the radial artery in an end-to-side fashion, and a concomitant vein was anastomosed to a radial venae comitantes or a superficial vein in an end-to-end fashion.

Nine scaphoid waist nonunions were treated with IC-NBG (Figure 3). A standard volar russe approach was chosen for the scaphoid. The nonunion site was, then, prepared to receive a corticocancellous interpositional graft taken from the iliac crest. 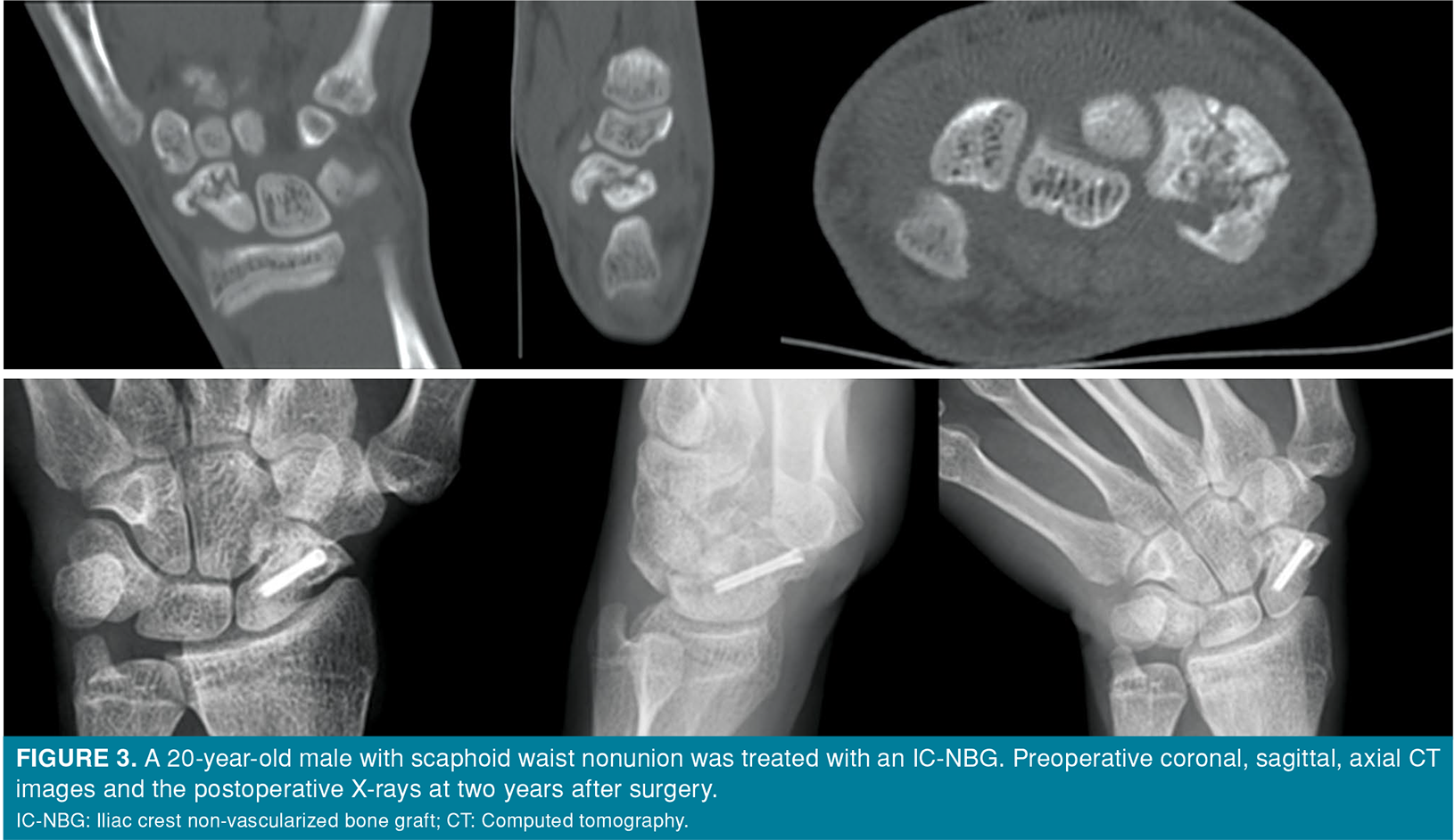 After insertion of the graft, internal fixation was performed with a headless compression screw. A single type of compression screw (3.5 mm, headless, cannulated and full threaded) (Suzhou Youbetter - Medical Apparatus Co. Ltd., Jiangsu, China) was used in all 24 patients.

After surgery, the wrist was immobilized for six weeks in a short-arm thumb spica cast that left the interphalangeal joint of the thumb free. After removal of the cast, active assisted motion exercises were allowed. The patients who could not achieve full range of motion were referred to physiotherapists in our hospital. The patients were followed at 2, 4, 6, and 12 weeks after surgery and monthly thereafter, until the bony union of the scaphoid was confirmed.

Prior to surgery, four different views of radiographs (wrist anteroposterior [AP], AP with ulnar deviation, oblique, lateral), (CT), and magnetic resonance imaging (MRI) of the wrist were performed. Radiological and clinical examinations were routinely performed at 2, 4, 6, and 12 weeks after surgery and during the final follow-up visit. Postoperative radiological measurements and functional evaluations collected at the final followup were analyzed. On postoperative radiographs, the lateral intrascaphoid angle (LISA) and scaphoid height-to-length ratio were measured on sagittal CT images by two hand surgeons. Functional examination of all patients was performed by a single-blinded physiotherapist who was not involved in the surgical treatment. Wrist ranges of motion in extension, flexion, radial and ulnar deviation from the neutral position were measured with a goniometer. Grip strength was measured with a Jamar dynamometer (Sammons Preston Rolyan, Chicago, USA) and was compared with the contralateral side.

Wrist pain was rated using a Visual Analog Scale (VAS 0= no pain, 100= severe pain). The functional subjective outcome was assessed with the Quick Disability of the Arm, Shoulder and Hand (Q-DASH) Questionnaire and Mayo Wrist Score. The Turkish validated versions of the VAS and Q-DASH were used.[15,16]

Statistical analysis was performed using the IBM SPSS version 22.0 software (IBM Corp., Armonk, NY, USA). Continuous variables were expressed in mean ± standard deviation (SD), while categorical variables were expressed in number and frequency. The Student t-test or Wilcoxon rank-sum test was used to normally distributed continuous variables. To compare the differences among groups, one-way analysis of variance (ANOVA) or Kruskal-Wallis H test was used for continuous variables, while the chi-square test was used for categorical variables. The Pearson and Spearman correlation tests were used for correlation analysis. A two-sided p value of <0.05 was considered statistically significant.

The mean follow-up was 27.1±13.5 (range, 24 to 54) months. Fourteen of 24 (58.3%) patients were smokers. The right side was injured in 12 (50%) and the left in 12 (50%) patients. Ten of the fractures were on the dominant hand (41.6%). The duration of nonunion was known in 17 patients, in whom the mean time to surgery was 25 months (7 months to 10 years). The duration of nonunion was unknown in seven patients. There was no statistically significant difference among the groups for age, sex, and smoking. Demographic and clinical characteristics of the patients are summarized in Table I.

Union was observed in seven (87.5%) patients after IC-NBG, in six (85.7%) patients after MFC bone graft, and in nine (100%) patients in the treatment group with 1,2-ICSRA-VBG (Table II). There was no statistically significant difference in the union rates (p>0.05).

Grip strength, extension, flexion, radial deviation and ulnar deviation after surgery were evaluated in comparison to the contralateral hand and among the groups. All functional and radiological outcomes of the patients are summarized in Table II.

Theoretically, VBGs have the benefit of keeping osteoblasts and osteocytes alive. Different surgical techniques have been proposed to increase the union rate. Meta-analyses comparing NVBGs and VBGs in the treatment of SN failed to show a significant difference in union rates. In a recent systematic review by Pinder et al.[12] involving 1,602 patients, the union rate was 88% for NVBGs and 92% for VBGs, but it did not reach statistical significance. In our study, the differences regarding the union rates were not statistically significant, either.

When a vascularized graft is used, consolidation occurs through normal fracture resolution; as a result of the providing osteogenic, osteoinductive and osteoconductive stimuli, that more appropriately support biomechanical loading to achieve and rapid consolidation.[19,20] In contrast, the use of a NVBG promotes consolidation through a substitution process, by providing a ‘‘scaffold’’, instead of living tissue.[20] In our study, the scaphoid height-to-length ratio in all three groups was consistent with the normal value in the literature and there were no statistically significant differences among the groups. It has been suggested that all three techniques are good at preventing the scaphoid construction. However, no consensus on the normal value of LISA has been reached in the literature.[21]

Although some studies obtained no satisfactory results in patients treated with NVBG and screw fixation for scaphoid non-unions, recent meta-analyses have shown that, despite a higher union rate and earlier union with the VBG technique, this radiological advantage does not provide any functional benefits.[22,23] Additionally, VBGs are technically more difficult and need more surgical experience. The IC-NBG is widely used as a standard technique and provides relatively large volumes and relatively easy to harvest grafts with good biomechanical properties. In the present study, better outcomes could be obtained with the IC-NBG for SN.

The main limitations of this study are its single-center and retrospective design with a relatively small sample size. In addition, the choice of surgical technique was determined by the surgeons’ experience and discretion. Further large-scale, prospective studies are needed to confirm these findings.

In conclusion, we suggest to use IC-NBG for scaphoid waist nonunion as the primary procedure, as it is easier, does not require special experience, and has better functional outcomes. We do not recommend MFC bone graft for primary treatment of scaphoid waist nonunion, since the operation is longer, more difficult, and requires microsurgical techniques with poor outcomes.