Gout tophus in transferred tendons after 33 years: A case report

Surgical site gout is an extremely rare complication that is difficult to diagnose, particularly in patients without a history of gout. A 57-year-old male patient was admitted with no previous history of gout, complaining of surgical site gout located at the junction where flexor carpi ulnaris tendon was transferred to extensor digitorum communis tendon after 33 years of the initial surgery. The patient was presented with a progressive swelling over the last three months which was located on the dorsoulnar side of the right wrist joint. Magnetic resonance imaging revealed an iso/hypointense mass. During the excisional biopsy, retained non-absorbable suture materials were observed within the mass. Histopathological examination result was reported as a typical gout tophus. No recurrence was observed after 18 months of follow-up. In conclusion, surgical site gout may be observed at transferred tendons years after the initial surgery.

Herein, we report an extremely rare case of surgical site gout located at the junction of the transferred tendons, flexor carpi ulnaris (FCU) tendon to extensor digitorum communis (EDC) tendon, after 33 years of the initial surgery.

A 57-year-old male patient was admitted to our hand surgery department complaining of a progressive swelling located on the dorsoulnar side of the right wrist joint. The patient reported that the mass was started to grow for the past three months. On physical examination, there was no tenderness or erythema around the mass. The range of motion of the wrist joint was within the normal range. Neurovascular examination findings were normal. The patient was not diagnosed with any chronic disease previously, including gout or not under any medication. He had a history of an occupational injury 33 years ago in which he lost extensor muscles and tendons on the right forearm. Thus, the patient underwent a tendon transfer surgery in which the FCU tendon was transferred to EDC tendon (Figure 1). The patient’s family history was unremarkable for gout. 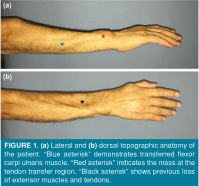 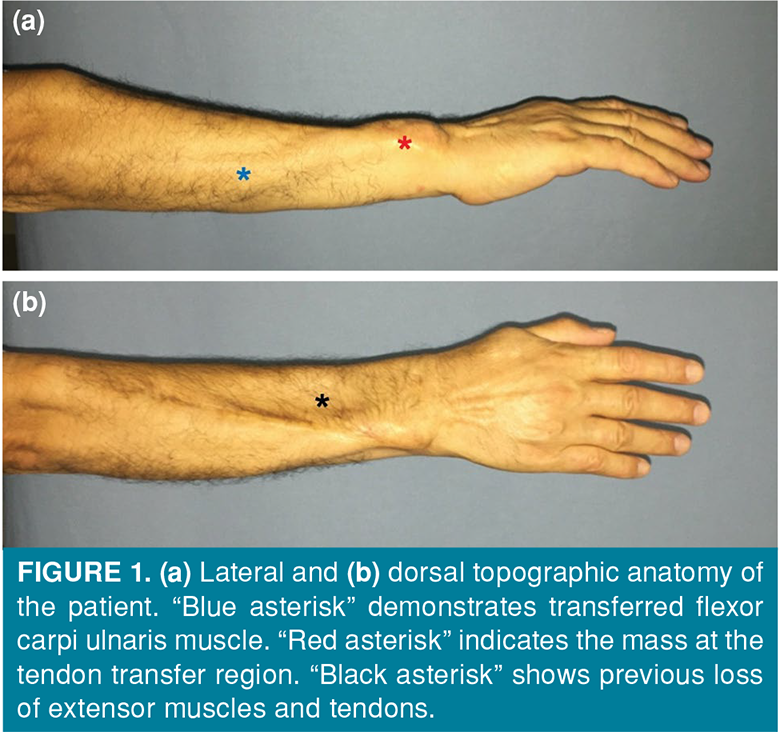 Magnetic resonance imaging (MRI) revealed an iso/hypointense mass at proton density-weighted and fat-suppressed T1 images (Figure 2). We decided to perform excisional biopsy. A written informed consent was obtained from the patient. During surgery, it was confirmed that the FCU tendon was transferred to EDC tendon. The tumor was located within the junction where the FCU tendon was transferred to EDC tendon. Non-absorbable suture materials were observed within the tendon transferred region (Figure 3). A caseous material was reached following the opening of the paratenon suggestive of tendon necrosis, tuberculosis, or a foreign body reaction. An excisional biopsy was performed, and the specimens were sent for histopathological and microbiological evaluation. The weakened tendon was repaired with eight-strand and epitendinous sutures.

Figure 2. A magnetic resonance imaging scan of wrist mass. (a) Proton density-weighted and (b) fat-suppressed T1 images showing iso/hypointense mass located on the dorsal side of ulna.
× 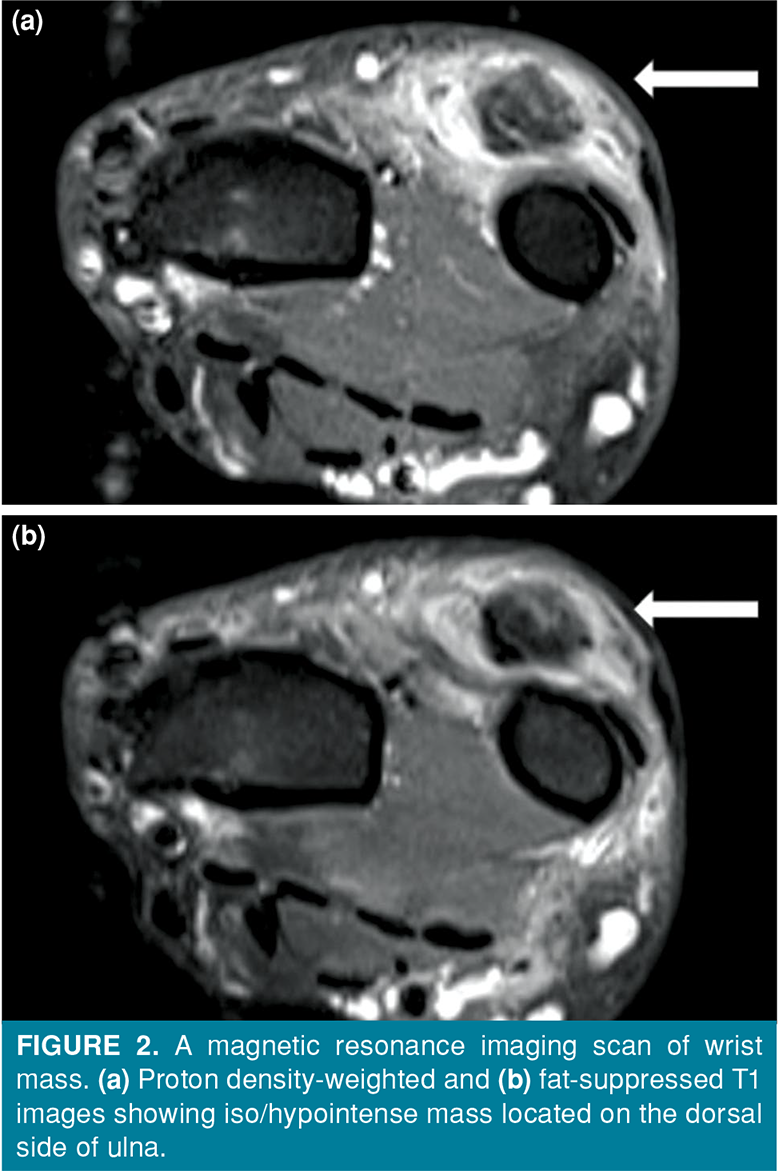 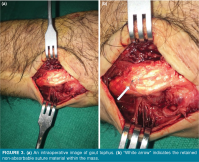 Figure 3. (a) An intraoperative image of gout tophus. (b) “White arrow” indicates the retained non-absorbable suture material within the mass.
× 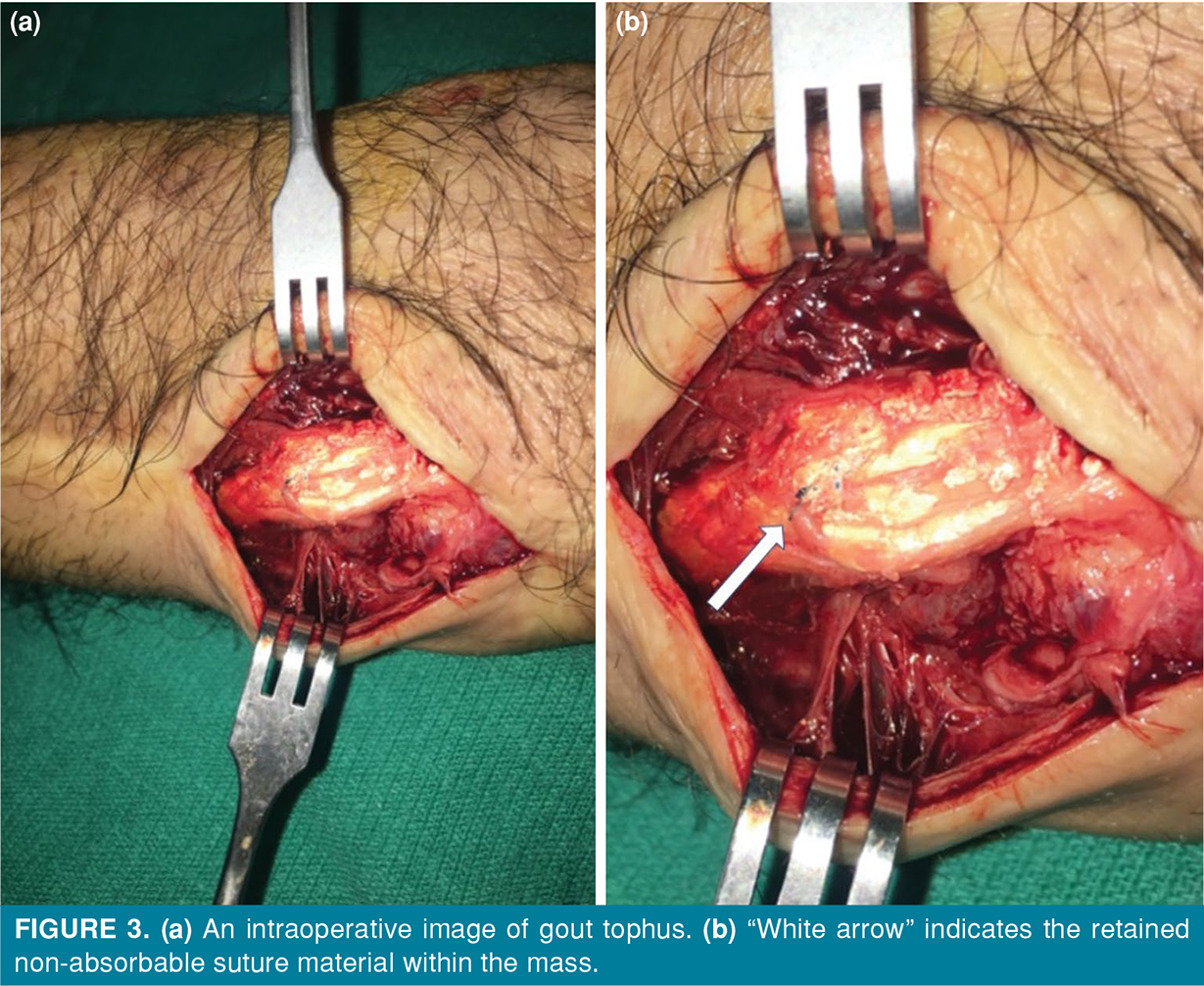 No organism was seen in the initial Gram staining, and there was no bacterial growth in the microbiology cultures. His preoperative blood laboratory test results were within normal ranges for complete blood count, complete metabolic panel, and uric acid levels. Microscopic examination revealed typical morphology of a gouty tophus. A granulomatous inflammation consisted of a fluffy cotton candy-like material and surrounding foreign body giant cells. At the periphery, fibrotic synovium was visible (Figure 4). Since urate crystals are dissolved in formalin fixation, microscopic examination under polarized microscope failed to demonstrate urate crystals. The patient was consulted with rheumatology department and antigout therapy was initiated. The patient's wound was healed without any complication. There was no recurrence at 18 months of follow-up. 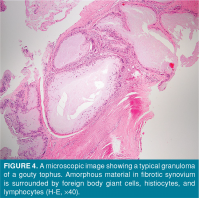 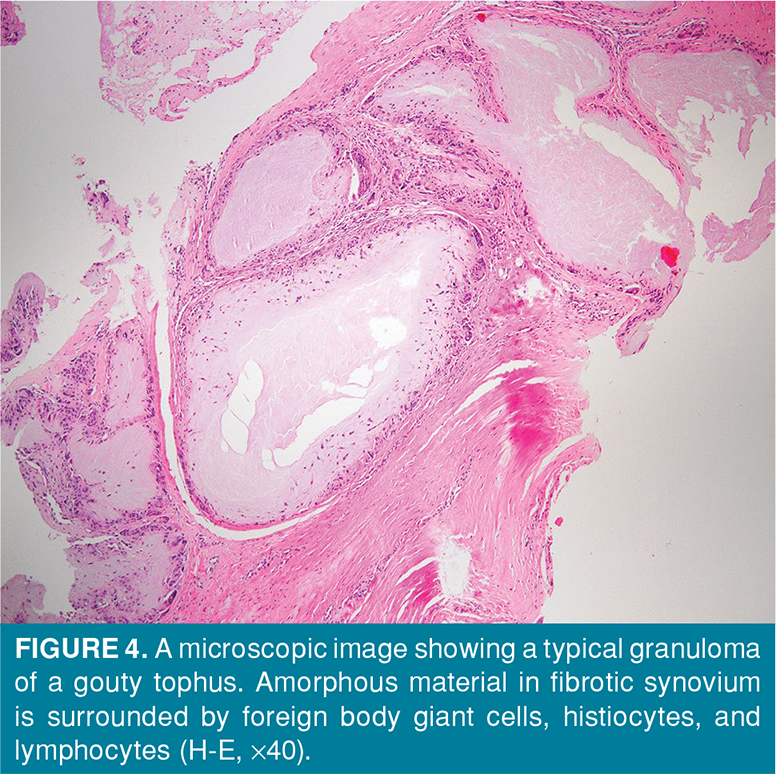 Gout is a metabolic disorder caused by the chronic deposition of monosodium urate crystals in tissues.[7] Gout tophus formation is mostly attributed to poorly controlled hyperuricemia, and mainly occurs around joints and tendons.[8] Gout tophus involving hand and wrist are relatively uncommon, and the vast majority of these cases present with compression of adjacent structures.[9,10]

Gout flaring is a known entity following surgery due to the catabolic events. Jeong and Jeon[2] reported that 44.3% of the patients developed acute gout flare during the post-surgical period in a mean 3.7-day-interval after surgery. Friedman et al.[11] found that 33.3% of patients with a previous gout diagnosis had acute gout flare following gastric surgery. In our case, this was developed 33 years after the initial surgery, and current surgery was uneventful for acute gout flare. On the other hand, postoperative reports of gout in the long-term at the surgical site are extremely rare. Few reports have been published in the literature demonstrating surgical site gout,[3-6] and only one of the cases was located at the upper extremity.[5] Ortman and Pack[3] reported a case with a long history of hyperuricemia who developed loosening of hip arthroplasty secondary to a gout tophus. Chen et al.[4] reported two cases with a history of gout who had postoperative surgical site gout in 10 and 12 years after total knee arthroplasty, respectively. Giani and Gutteling[6] reported a patient who developed surgical site gout at 12 years following an Achilles tendon repair. The unique feature of the patient was the absence of a history of gout. Sainsburry et al.[5] also reported a surgical site gout in a repaired flexor profundus tendon after seven years of surgery.

Although Wernick et al.[12] reported that gout tophus might be the initial presentation of gout, the only case with surgical site gout was reported by Giani and Gutteling[6] in a patient without a gout history. Our patient was not diagnosed with gout, until he developed a gout tophus at the previous tendon repair site. Uric acid level was within normal limits during the preoperative evaluation. Although hyperuricemia is a typical feature of gout, its absence does not always rule out the diagnosis.[7,13] In our case, we used MRI to investigate differential diagnosis including malignancies. The recent literature recommends utility of both ultrasound and MRI in the diagnosis of gout.[14] Although MRI finding are non-specific compared to ultrasound, it has the advantage of providing information regarding deeper structures and other potential diagnosis.[14] The differential diagnosis of a gout tophus includes granulomatous infections originating from mycobacteria, certain types of fungi and Brucella spp., as well as sarcoidosis and foreign body reactions.[15] Specimens obtained during excisional biopsy requires further microbiological and histological studies.

In conclusion, surgical site gout can be observed at the site of transferred tendons years after the initial surgery, despite normal uric acid levels and, therefore, it should be considered in the differential diagnosis. Non-absorbable suture materials and altered biomechanics of the tendons could be one of the reasons for surgical site gout tophus.