The importance of Böhler’s angle in calcaneus geometry: A finite element model study

Objectives: Calcaneal fractures are the most common tarsal fractures following a foot-ankle trauma. The Böhler’s angle is an important measurable angle before, during, and after surgery. In this study, we aimed to investigate correlation between Böhler’s angle, calcaneal strength, and subtalar joint stress using a finite element analysis (FEA).

Patients and methods: Between January 2016 and December 2016, computed tomography (CT) scans were used with MIMICS® software for FEA. The ankle and foot of a 23-year-old male person with a height of 180 cm and weighing 80 kg was modeled as reference. Raw coronal CT images were obtained in Digital Imaging and Communications in Medicine format with the resolution of 512X512 pixels and 0.3-mm slice intervals in 135 kV. The structures including tibia, fibula and 26 other bones (talus, calcaneus, cuboid, navicular, three cuneiforms, five metatarsals, and 14 components of phalanges), cartilage and ligamentous tissues were modeled to form ankle joint. After determining Böhler’s angle as 35 degrees for the reference model, a fracture line was created on calcaneus. Calcaneus was remodeled with the Böhler’s angle of 45, 40, 30, 25, 20, 10, and 0 degrees respectively. All models were transferred to ANSYS software for FEA and the loads on the lower extremities with normal posture were applied on models.

Several studies support the notion that a congruous anatomic reconstruction of the joint surface is critical for optimal clinical outcomes after operative treatment.[7,8] Most authors use the Böhler’s angle. The Böhler’s historical tuber-joint angle of the calcaneus has been used since 1931.[9] The intersection of two lines forms the Böhler’s angle: a line is drawn between the posterior superior aspect of the calcaneus and the highest point of the posterior subtalar articular surface; a second line, which intersects the first, is drawn from the highest point of the anterior process to the posterior margin of the subtalar surface (Figure 1). The angle ranges between 20 and 40 degrees; a decrease in this angle indicates collapse of the posterior facet of the calcaneus. There are many studies examining the correlation between the Böhler’s angle and the functional outcome of displaced intra-articular calcaneal fractures.[10,11] In calcaneus fractures, the Böhler’s angle is one of the most objective indicators of intraoperative (after reduction) and fracture follow-up. However, it is not the one.[12] In the literature, decreased Böhler’s angle has been shown to be an important parameter in the diagnosis of fractures and increased stress load.[13] 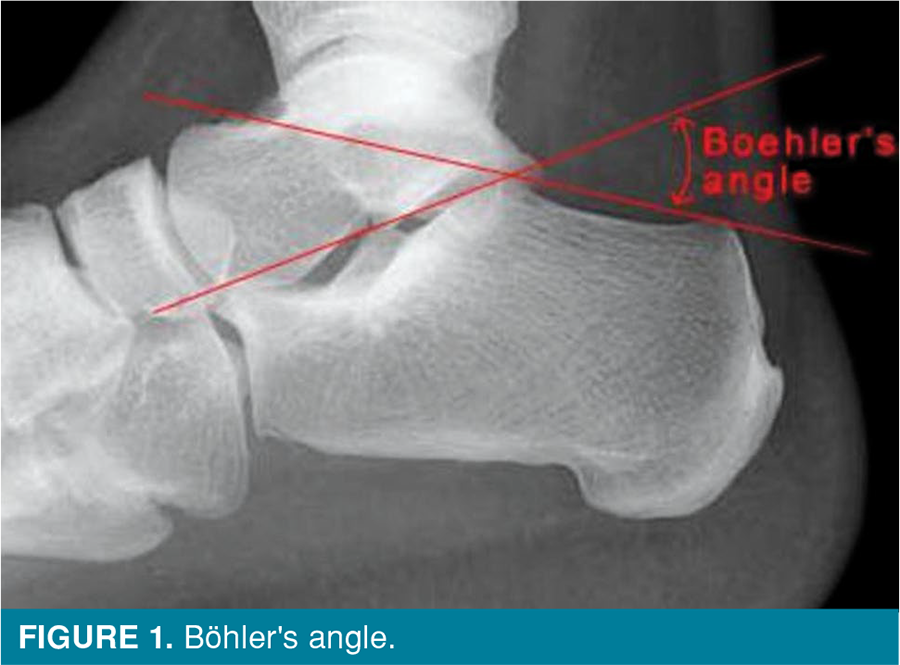 Novel therapeutic modalities can be developed with a better understanding the effects of intra-articular calcaneal fractures to the joint mechanics and relationship between osteoarthritis and altered biomechanics. In parallel with the recent advances in engineering stress analysis, techniques for predicting the behavior of structures with complex geometry and material properties have been developed, and the most appropriate is the finite element analysis (FEA).[14] Finite element modeling is a well-established method to the joint contact stresses.[15,16]

A three-dimensional (3D) model of the human foot and ankle was obtained to evaluate the effect of different Böhler’s angles on the subtalar joint due to the loads created on the ankle between January 2016 and December 2016. In this study, a left foot and ankle joint of a 23-year-old male person with a normal anatomy with a body weight of 80 kg and height of 180 cm were modeled as a reference model through Materialiseʼs Interactive Medical Image Control System (MIMICS® version 10.01;Materialise NV, Leuven, Belgium) program for FEA, of which computed tomography (CT) images are shown in Figure 2. The Toshiba Aquilion CT device (Canon Medical Aquilion series) was used for CT imaging of the patient at Kocaeli Derince Training and Research Hospital. Coronal CT images were obtained in Digital Imaging and Communications in Medicine (DICOM) format by performing scanning at 135 kV with a cross-sectional thickness of 0.3 mm and a resolution of 512x512 pixels. The study was conducted in accordance with the principles of the Declaration of Helsinki. 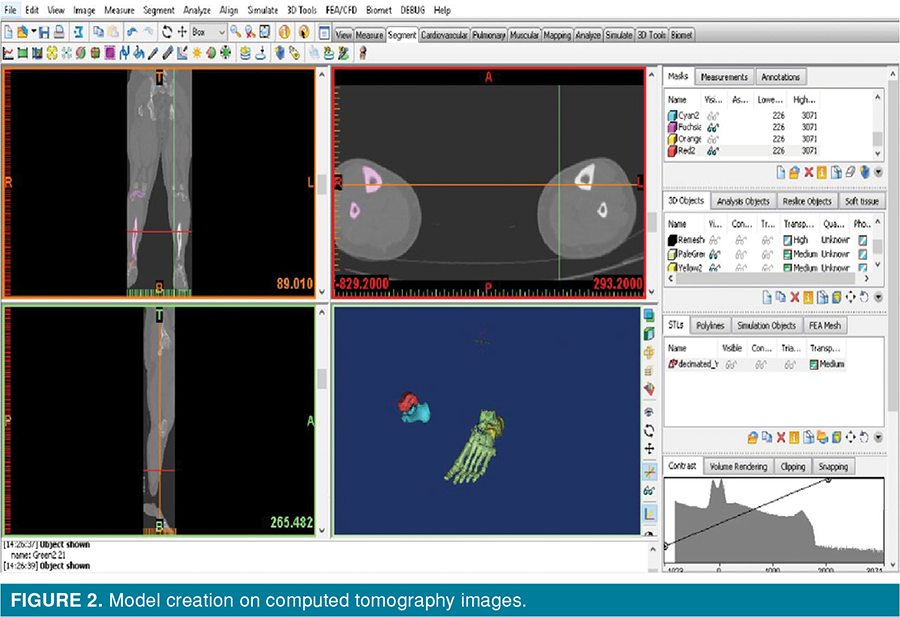 The geometries obtained from the MIMICS® software were converted to stereolithography format, and a 3D ankle model including the tibia, fibula, and 26 bones forming the ankle joint (talus, calcaneus, cuboid, navicular, three cuneiforms, five metatarsals and 14 components of the phalanges) was obtained through the GEOMAGIC® (3D Systems Inc., NC, USA), which was the reverse engineering software (Figure 3). The obtained models were sent to the SolidWorks® 2015 software (SolidWorks Corp., MA, USA) and the cartilage tissues forming the ankle were modeled.

Figure 3. Determination of the Böhler's angle.
× 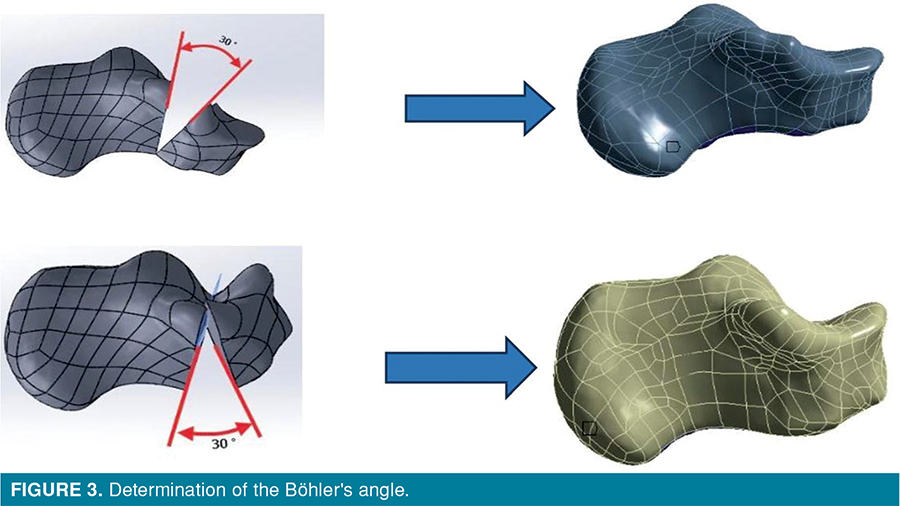 We created an ankle model with a Böhler’s angle of 35 degrees and, then, created a fracture. Following this, we reduced the fracture to a different Böhler’s angle and measured the acting forces to the subtalar joint. We tested different post-reduction Böhler’s angles. The Böhler’s angle was remodeled to be 40°, 45°, 30°, 25°, 20°, 10°, and 0°, respectively (Figure 3).

A tetrahedral mesh network structure was created on the foot model through ANSYS® Workbench version 17.0 software (ANSYS Inc., PA, USA) (Figure 4). The network structure size was determined as 2 mm in bone structures. Our models consist of about 153,910 nodes and 85,608 elements. Solid 185 and solid 285 were used as the element types. All analyses were made non-linearly. 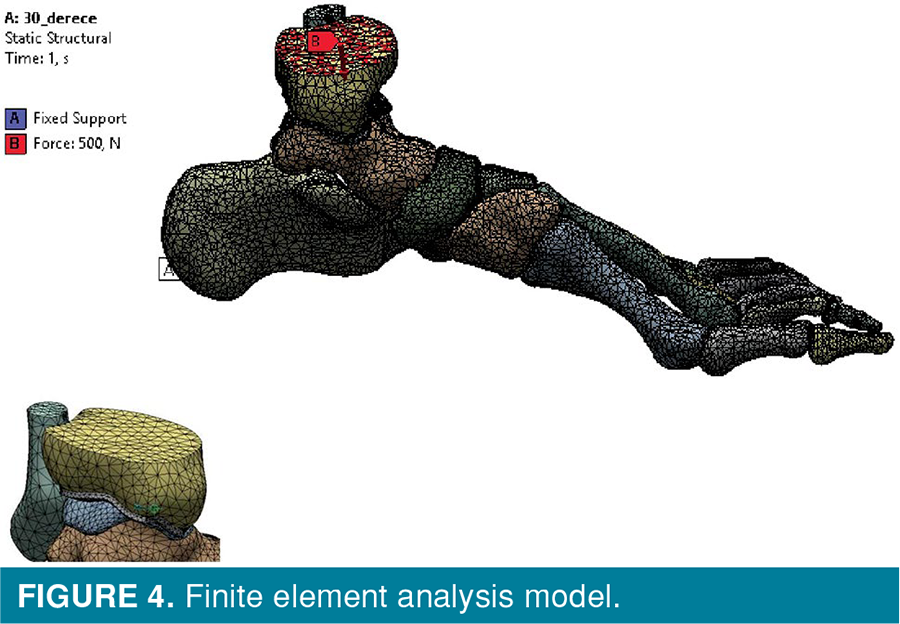 In accordance with the literature, material properties for bone and soft tissue forming the foot and ankle were selected as isotropic materials (Table I).[17-21] 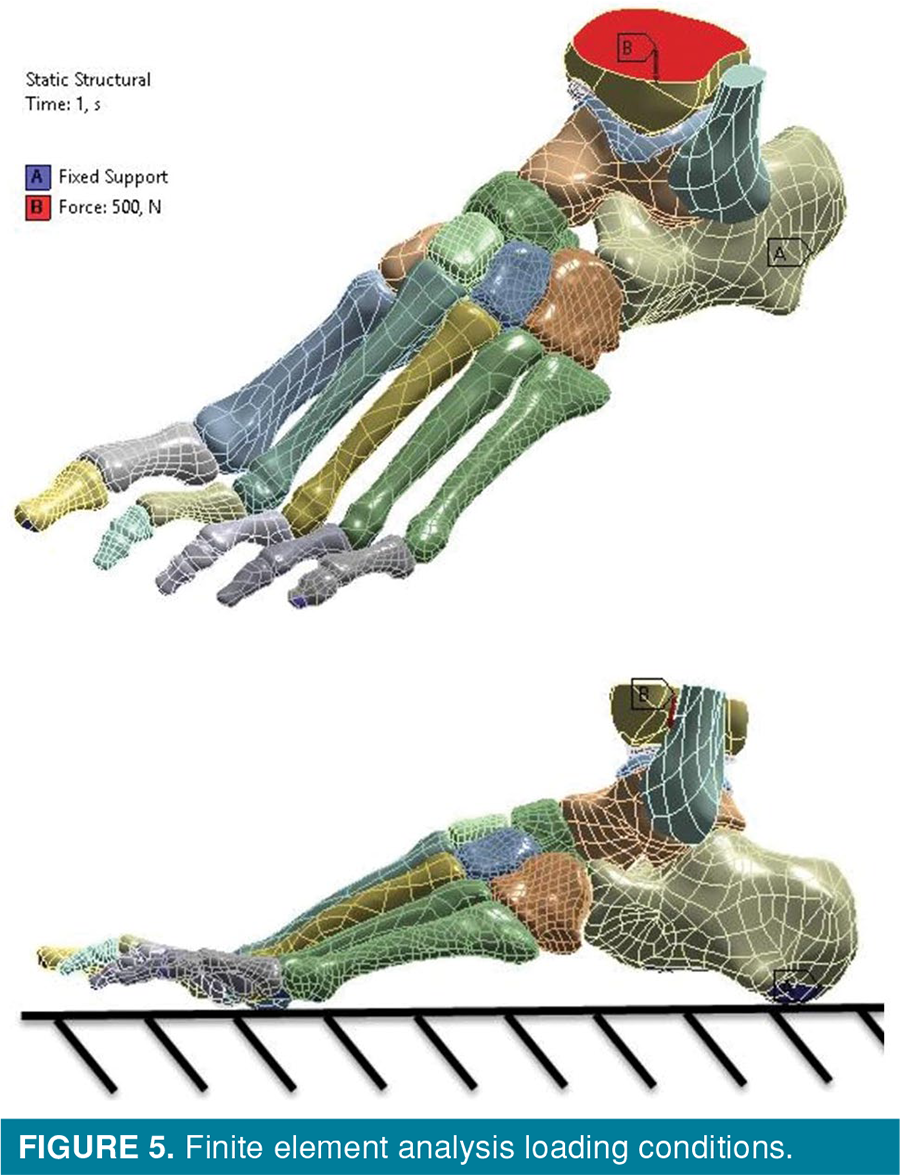 The same boundary conditions were used in all models. Finally, a convergence analysis was conducted (Figure 6). The force convergence was commonly used in non-linear analyses.

Statistical analysis was performed using the SPSS version 16.0 software (SPSS Inc., Chicago, IL, USA). One-way analysis of variance (ANOVA) and Levene's test were used for to examine significant differences between the Böhler’s angle and subtalar joint pressure. Pearson’s correlation analysis was performed to identify the direction of change of the pressure on the subtalar joints through the change in Böhler’s angle. A p value of <0.05 was considered statistically significant.

A Maximum equivalent stress occurred on the calcaneus, as obtained through non-linear stress analyses, and the reaction force outcomes on the subtalar joints are shown in Table II.

According to the reference model, it was found that the maximum stress on the calcaneus increased, as the Böhler’s angle decreased (<350), and there was a statistically significant difference (Figure 7). Stress increased, as the Böhler’s angle increased (>350); however, the obtained stress values were found to be closer to the reference model, and a statistically significant difference was observed in terms of the obtained values. The stress distribution on the calcaneus in the model with the Böhler’s angle of 45o is given in Figure 8.

Figure 8. Stress distribution on the calcaneus in the model with the Böhler's angle of 45°.
× 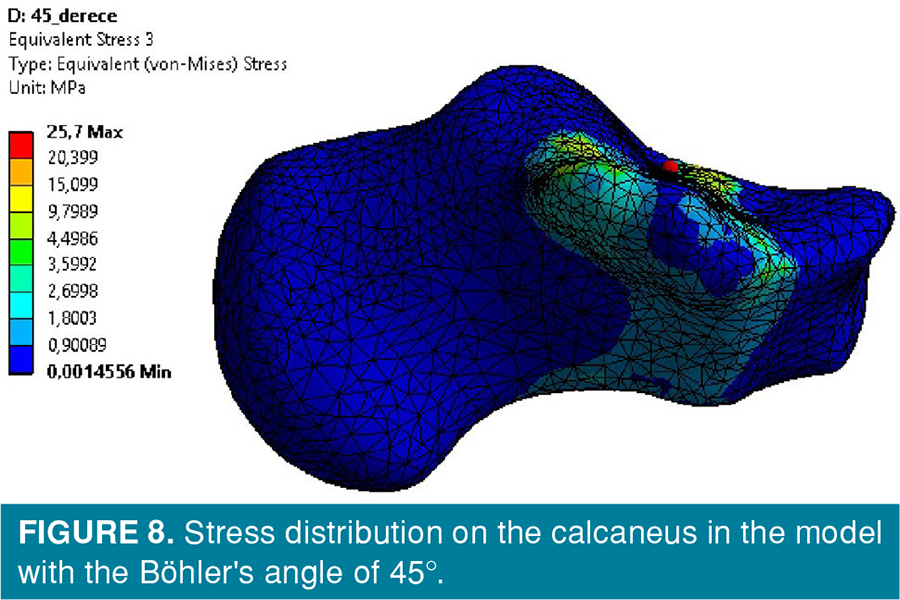 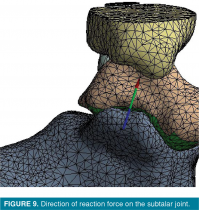 Figure 9. Direction of reaction force on the subtalar joint.
× 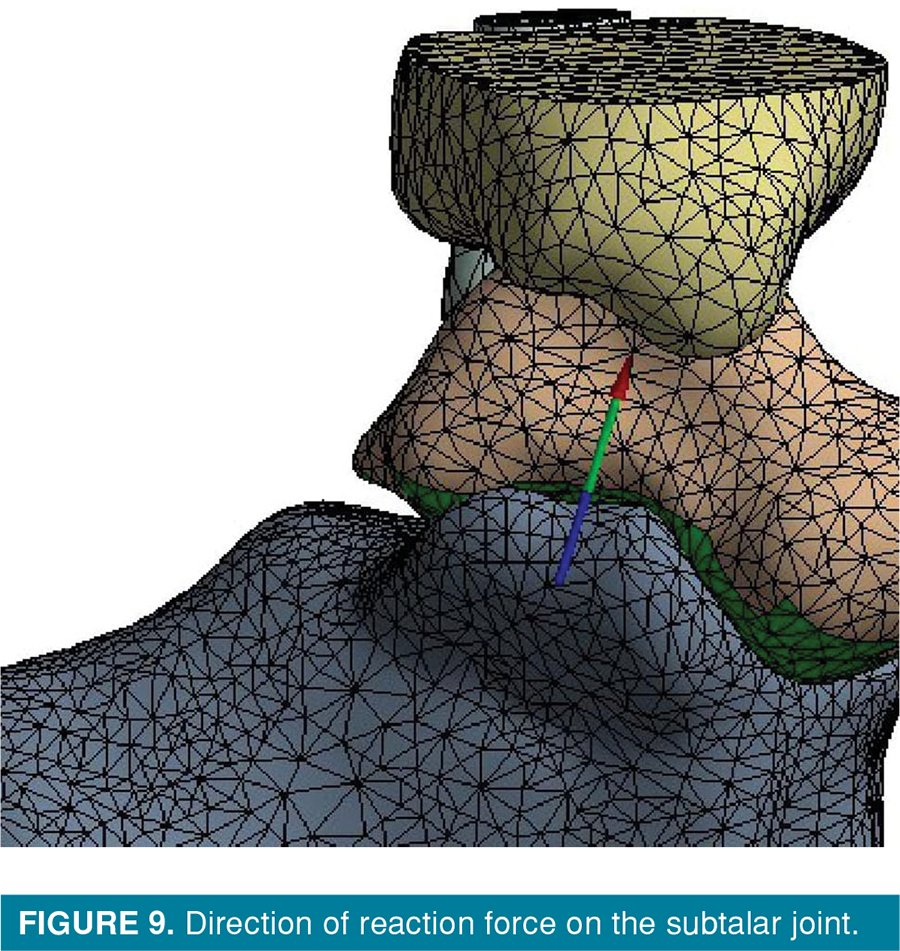 The results of the ANOVA one-way analysis of variance (ANOVA) analysis are shown in Table III. The variance of the groups was homogeneous (p=0.187). Accordingly, homogeneity test of the variances of the groups was performed. There was also a significant difference between the subtalar joint pressure and Böhler’s angle, indicating that the pressure on the joints would change as the Böhler’s angle changed (p=0.043) (Table IV).

Table 3. Test for homogeneity of variances
×

The integrity of calcaneal anatomical morphology is critical to ensure normal function of the hindfoot and stress conduction for weight bearing as well as to support the arch.[22,23] Posterior facet incongruity has been confirmed to be an important predictor of poor clinical outcomes in calcaneal fractures.[24] The articular incongruity of 1 to 2 mm step-offs has been shown to be associated with a considerable load shift in cadaver experiments.[5,6] The most important concept that we have learned in recent years for the treatment of calcaneal fractures may be that the 3D calcaneal anatomy must be restored during treatment.[25] Magnan et al.[26] showed that a better reduction as measured by CT scanning might result in better outcomes. In this study, CT scan images were used with MIMICS® software for FEA. The FEA studies have long been known as reliable complementary tools to quantitatively evaluate the biomechanical performance of tissues, organs, and articular joint.[27] These studies mainly offer precise control of loading, motions, boundary conditions, and structural alterations in parametric studies of the joint response. In our study, change in the Böhler’s angle and its effects on the pressure on the subtalar joint were evaluated, and the pressure on subtalar joint was found to decrease, as the Böhler’s angle increased, and the pressure increased, when the Böhler’s angle decreased.

To date, there are several radiographic parameters used for the description of the calcaneal fractures. The Böhler’s angle is a well-established tool to quantify fracture displacement with a prognostic value in predicting morbidity associated with calcaneal fractures.[11] It is a simple, rapid, and reliable measurement which offers several advantages in the clinical setting.[28] In addition, it can be used to guide the fracture reduction during surgery. In clinical practice, one of the main surgical goals is to restore the Böhler’s angle back to normal range of 25 to 40 degrees[29] to yield satisfactory results.[7,8] However, there are several studies examining possible correlations between the restoration of the Böhler’s angle and improved clinical outcomes. According to the literature, a Böhler’s angle lower than 25 degrees increases the maximal calcaneal tension.[13] A Böhler’s angle of 0 increases the surgical subtalar arthrodesis by about 10 folds.[30] When the angle is more than 40 degrees, the tension is slightly increased; however, it does not pose a problem in the joint. In the literature, two opposing views are available. In a review including 70 cases with displaced intra-articular calcaneal fractures, Paul et al.[8] reported that patients achieved good outcomes following operation, when the Böhler’s angle was restored at >10 degrees. The outcomes of patients with a Böhler’s angle of ≥10 or <10 degrees who underwent surgery or conservative treatment and were followed were evaluated. In the patients without restored Böhler’s angle, a higher pressure onto the subtalar joint was applied and unfavorable results were obtained, resulting in subtalar arthrodesis. However, Kundel et al.[3] and Mauffrey et al.[31] oppositely found no correlation between the Böhler’s angle during follow-up and the final functional outcomes in the operative and conservative groups. In our study, we observed that Böhler’s angle was an important parameter in calcaneus fractures, and we discussed the effects of change in the Böhler’s angle on the subtalar joint. Unlike other studies, the pressure load on the subtalar joint was evaluated in this study.

Nonetheless, there are some limitations to the present study. Muscular structures were not included in the analysis. Different muscle strengths may have caused different results. The reliability and validity of the study can be also increased with cadaveric studies and comparing the results with finite element models. Therefore, we recommended further studies to confirm these findings.