Patients and methods: A total of 181 patients (83 males, 98 females; median age: 44 years; range, 15 to 83 years) who underwent surgical treatment for PNSTs in our tertiary oncology center between January 2010 and December 2019 were retrospectively analyzed. Eighty-two patients were diagnosed with a neurofibroma, 79 with a schwannoma, and 20 with a malignant PNST (MPNST). The patient group was evaluated as malignant (n=20) and benign (n=161). Age- and sex-matched patients admitted to our outpatient clinic of orthopedic and traumatology with non-specific symptoms other than tumor, infection, fracture, and rheumatological or hematological diseases were included as the control group (n=165). Data including age, sex, definitive histopathological diagnosis, and pre-treatment CBC values were obtained from the hospital records. Pre-treatment CBC values such as neutrophil-to-lymphocyte ratio (NLR), platelet-to-lymphocyte ratio (PLR), and lymphocyte-to-monocyte ratio (LMR) were calculated for both malignant and benign groups and control groups. Diagnostic values of NLR, PLR, and LMR between PNST groups were assessed using the receiver operating characteristic (ROC) curve analysis.

Conclusion: Our study results suggest that NLR, PLR, and LMR may have an added value in the early diagnosis of PNSTs and are valuable for differentiating patients from healthy individuals, although their value in differential diagnosis is still unclear.

Peripheral nerve sheath tumors (PNSTs) are soft tissue neoplasms, originating from peripheral nerves or cells associated with the nerves sheath. They range from benign schwannomas, which are the most common, to neurofibromas and malignant PNSTs (MPNSTs) with highly malignant characteristics and relatively rare.[1] Differential diagnosis is usually made based on physical examination, clinical findings, location, genotype, and radiological imaging findings. Although PNSTs are seen on anatomical courses of nerves and, despite possible neurological symptoms and comprehensive radiological findings, preoperative diagnosis can be challenging, particularly in borderline PNSTs and those with atypical localization.[2] Achieving a better prognosis in MPNSTs and reducing perioperative complications (i.e., iatrogenic neurovascular injury, inadequate resection, and motor and sensory loss) in benign PNSTs, relies on early diagnosis.[3] As well as clinical and typical radiological findings, bioactive molecules, growth factors, proangiogenic factors, enzymes and cancer-related host inflammation factors are valuable in the diagnosis of these tumors.[4,5] Despite ongoing researches, there is still no reliable, easily accessible, and clinically available biomarker.[6] On the other hand, inflammatory biomarkers are increasingly being regarded as risk factors for tumor development, adhesion, angiogenesis and metastasis, although their exact mechanism of actions are still not well defined.[7,8] Although it is not commonly used in the diagnosis of PNST preoperatively, many studies have been conducted with biomarkers such as S-100 protein, CD protein, growth-related protein, neurofibromin, and mitotic count values in tissue samples for histopathological diagnosis.[2,8] Biomarkers which can be easily available preoperatively, such as complete blood count (CBC) parameters, have not been previously studied in the diagnosis of PNST.

The CBC parameters and relevant ratios derived such as neutrophil-to-lymphocyte ratio (NLR), platelet-to-lymphocyte ratio (PLR), and lymphocyte-to-monocyte ratio (LMR) have been shown to be altered by systemic inflammatory response and are not only being used comprehensively in musculoskeletal tumors, but also in the diagnosis and evaluation of prognosis in many other tumors.[9-12] Although platelets and neutrophils can promote growth, adhesion, and seeding of tumor, lymphocytes are the basic components of the adaptive and innate immune system and, thus, their decrease impairs the immune defense.[7,10] Thrombocytosis, neutrophilia, and relatively low lymphocyte levels are also described in many tumoral tissues.[5]

In the light of these contemporary data, we hypothesized that aforementioned CBC parameters would have a previously unknown role as diagnostic tools in PNSTs which could help to reduce the diagnostic challenges. In the present study, therefore, we aimed to evaluate the diagnostic value of preoperative NLR, PLR, and LMR in the early and differential diagnosis of neurofibromas, schwannomas, and MPNSTs.

This single-center, retrospective study was conducted at Ankara Oncology Training and Research Hospital between January 2010 and December 2019. Patients with a pathological diagnosis of PNST who received no oncological treatment, had primary surgical treatment, and had complete hospital records were included. Accordingly, 194 patients were identified through archive screening and 13 patients who did not meet inclusion criteria were excluded from the study. Exclusion criteria were as follows: any infectious disease and elevated white blood count (WBC) cells and C-reactive protein results, rheumatological, hematological, or inflammatory diseases, and the use of anti-inflammatory drugs. Finally, a total of 181 patients (83 males, 98 females; median age: 44 years; range, 15 to 83 years) who underwent surgical treatment for PNSTs were included. The patients were divided into three groups according to their confirmed histopathological diagnosis as schwannomas (n=79), neurofibromas (n=82), and MPNSTs (n=20). The patients were further evaluated as malignant (n=20) and benign (n=161). Age- and sex-matched patients admitted to our outpatient clinic of orthopedic and traumatology with non-specific symptoms other than tumor, infection, fracture, and rheumatological or hematological diseases were included as the control group (n=165). Data including age, sex, definitive histopathological diagnosis, and pre-treatment CBC values were obtained from the hospital records. A written informed consent was obtained from each participant. The study protocol was approved by Ankara Oncology Training and Research Hospital Ethics Committee (No: 2020-09-790). The study was conducted in accordance with the principles of the Declaration of Helsinki.

Statistical analysis was performed using the IBM SPSS version 22.0 (IBM Corp., Armonk, NY, USA). Continuous variables were expressed in median (min-max), while categorical variables were expressed in number and percentage. Analytic methods (Kolmogorov-Smirnov and Shapiro-Wilk’s test) were used to evaluate normal distributions. Data between the groups for continuous variables were not fit to normal distribution. While comparison analyses between two groups were done using the Mann-Whitney U test, comparisons of categorical variables between independent groups were done using the chi-square test. Cut-off values for NLR, PLR, and LMR defined by receiver operating characteristic (ROC) curve analysis were used to classify patients in the PNST and control groups. Additionally, the area under the curve (AUC), cut-off values, sensitivity and specificity of these cut-offs values, positive likelihood ratio (+LHR), positive predictive value (PPV) and negative predictive value (NPV) were calculated for each parameter and the results were compared. A p value of <0.05 was considered statistically significant.

Figure 1. Distribution of patients according to diagnosis.
× 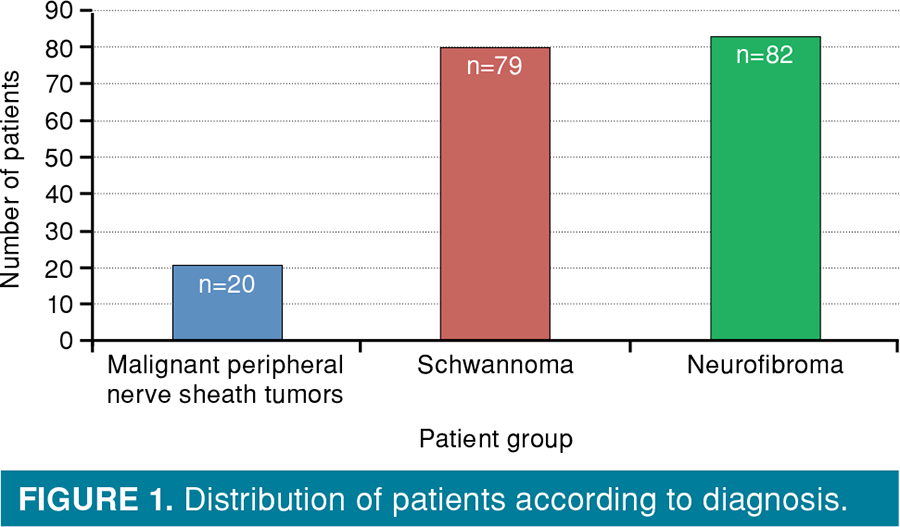 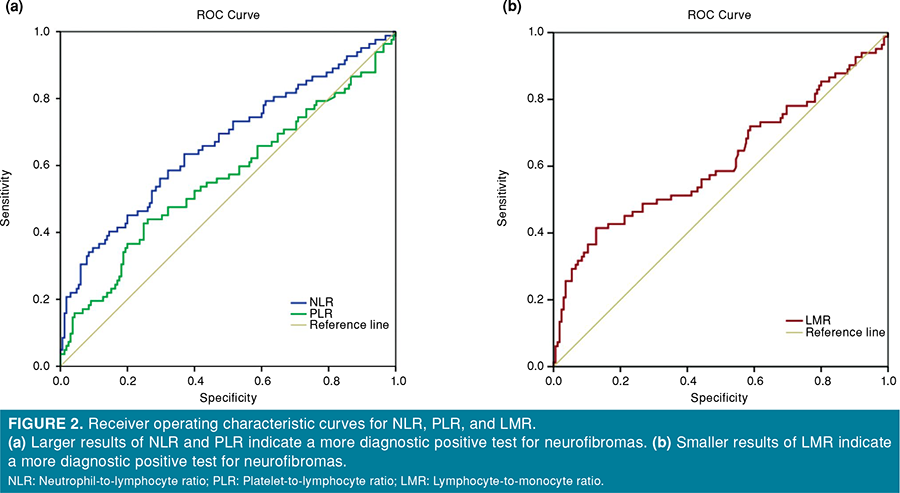 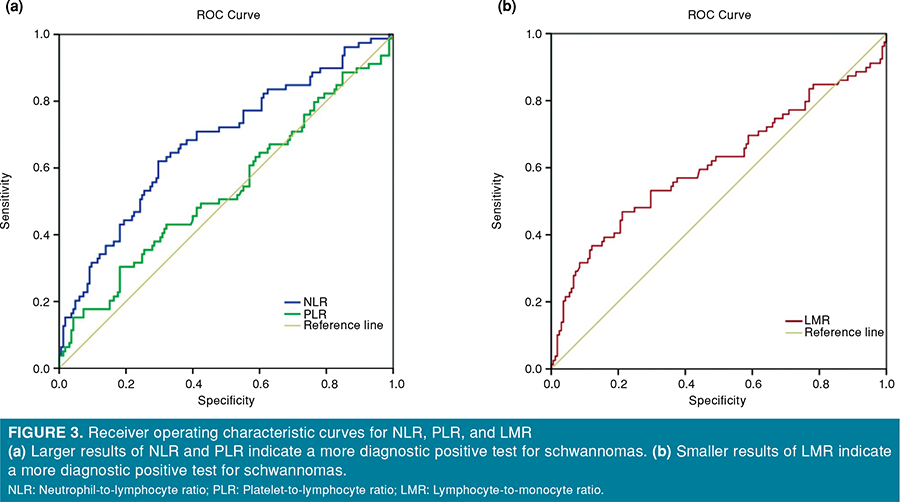 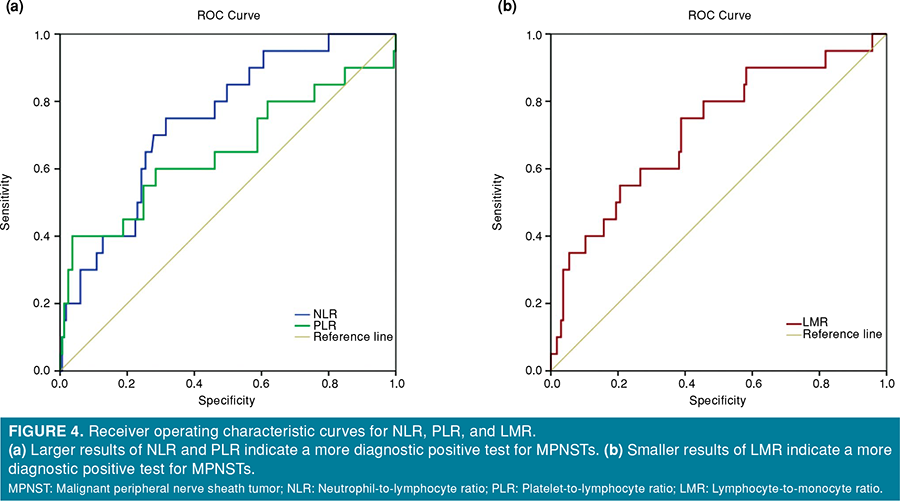 In the current study, we evaluated the role of factors that portray systemic inflammatory response in diagnosis of PNST. Our results showed that pre-treatment NLR, PLR, and LMR values obtained from peripheral blood had a diagnostic value in PNST patients, compared to healthy controls. In the literature, there are studies showing the diagnostic significance of pre-treatment CBC parameters in many soft tissue tumors.[9-14] In line with previous studies, our results demonstrated that CBC parameters were associated with the diagnosis of PNST. It seems plausible to perform in-depth analysis in a patient investigated for PNST, who has a high clinical suspicion, high NLR, PLR, and low LMR values. Also, when the PLR ratio is high, we should suspect more MPNST in the diagnosis of the nerve tumors.

Systemic inflammatory biomarkers such as NLR, PLR, and LMR have recently started to be used as alternatives to conventional methods in the diagnosis and management of different types of tumors.[5,9-17] The use of CBC parameters in the clinical setting as screening tools in diagnosis and prognosis of musculoskeletal tumors has been gaining popularity due to the inexpensive, non-invasive, and being easy to access nature of this method.[17] There are reports showing that the number of neutrophils that produce reactive oxygen species, which induce tumor growth, angiogenesis and metastasis, is increased more around malignant tumor cells.[7] Neutrophilia, decreasing the lymphocyte-mediated immune response, can prohibit the immune system by T-cell suppression. Platelets recruited by the influence of tumor cells can protect them from the immune response, thereby, promoting their dissemination.[8,10] Consistent with the literature, our study showed that PNST patients had elevated neutrophil and monocyte count with a decline in lymphocyte count.

There are many contemporary studies reporting the role of biomarkers derived from CBC in the differential diagnosis of tumors. In a study performed in 503 spinal tumors, NLR and PLR were found to be valuable markers in preoperative diagnosis and differentiation of primary and secondary tumors.[10] Cut-off values for NLR (>3.19) and PLR (>141) were also reported to be associated with a high risk of malignancy. In our study, statistically significant optimal diagnostic cut-off values for NLR (≥2.03), PLR (≥142.6) and LMR (≤4.19) had a diagnostic value for distinguishing PNSTs from non-PNSTs.

Ozyalvacli et al.[11] showed that NLR was useful in differentiation of breast cancer and benign proliferative conditions of the breast, as well as in the diagnosis and prognosis of breast carcinomas. In another study in lung carcinomas, annual changes of NLR and PLR were found to have a diagnostic and developmental value, compared to healthy controls.[12] On the other hand, canine studies showed that higher NLR with reduced albumin/globulin ratio might be considered the indicators of sarcomas during differentiation malignant tumors from benign ones.[13] However, the authors concluded that these values had no role in grading of the sarcoma. Similarly, NLR was found to be a useful biomarker in the diagnosis and prognosis of extremity and trunk soft-tissue sarcomas in another study.[14] It was also reported that NLR and LMR had a diagnostic value in cartilage tumors, such as enchondromas and low-grade chondrosarcomas.[15] Although our results showed that NLR, PLR, and LMR were significantly correlated with the diagnosis of PNSTs, inflammatory variables could be supportive in diagnosing PNSTs such as lung and breast carcinomas, spinal and cartilaginous tumors. These results indicate that the CBC biomarker may have an added value in the early diagnosis of PNST.

It can be argued that, as well as aiding in diagnosis, these parameters can also influence the decision-making process of the treating physician. In a study investigating the prognosis and treatment outcomes of the musculoskeletal soft tissue sarcomas, NLR was found to be more valuable as a predictor than PLR and other CBC biomarkers.[16] A meta-analysis including 40,559 solid malignant tumors also showed a median cut-off value of NLR (≥4) to be associated with poor prognosis.[17] Despite these encouraging results, as there are many serum-based inflammatory diagnostic markers providing controversial results, we suggest that NLR, PLR, and LMR should be considered to be used in the diagnosis of PNSTs with the combination of conventional methods. Although our results do not support the use of preoperative NLR, PLR, and LMR to differentiate neurofibromas, schwannomas, and MPNSTs, compared to healthy population, they still have a diagnostic value in the management of PNSTs.

We acknowledge the limitations to our study first being its retrospective and single-center design. In addition, systemic inflammatory biomarkers inevitably had intrinsic weaknesses, as they were non-specific predictors of PNSTs. Another limitation is the limited sample size of MPNSTs due to their low incidence. Also, although the cut-off values were statistically significant, their sensitivity and specificity were low. The main strengths of our study are the utilization of CBC biomarkers, which are simple, inexpensive, and readily available test, and exclusion of patient groups which may affect CBC parameters.

In conclusion, pre-treatment NLR, PLR, and LMR appear to have a diagnostic value in the PNSTs, compared to healthy individuals; however, their diagnostic value in the differential diagnosis still remains to be elucidated. The NLR emerges as a more precise differentiating factor in the diagnosis of PNST than PLR and LMR. Although our results do not allow us to strongly recommend the use of NLR, PLR, and LMR as sole variables in the differential diagnosis and treatment planning of PNSTs, they should be considered combined with other diagnostic parameters and can be useful as a basis for future researches.