Comparison of Turkish and international trends in carpal tunnel surgery

Objectives: This study aims to analyze the nationwide trends in carpal tunnel surgery by surgeons practicing in Turkey according to experience in years, training received (plastic surgery or orthopedics), and working location (Turkey or abroad) by slightly modifying Munns’ survey.

Materials and methods: A printed and online survey consisting of 11 questions was sent to Turkish and international surgeons. The surgeon’s province of practice, years in practice, type of education received as a resident, preferred operation room, preferred surgical approach, type of anesthesia used, use of postoperative orthosis and therapy were assessed in the survey.

Results: The survey was completed by 198 surgeons (a 25% response rate). The majority of surgeons practicing in Turkey (87%) and 67% of surgeons practicing abroad demanded electromyography (EMG) and nerve conduction studies. Sixty- one percent of respondents from Turkey and 76% of respondents practicing abroad did not administer antibiotics preoperatively. While the most common anesthetic technique used by international surgeons was subcutaneous local anesthesia (42%), Turkish surgeons preferred wrist block (18%). Surgeons practicing in Turkey with fewer than five years of experience were more likely to administer antibiotics preoperatively, use EMG/nerve conduction studies, utilize a mini-open approach and apply an orthosis postoperatively (p<0.05).

Although carpal tunnel syndrome is very common in practice, there is variability in its surgical management. Several studies have been published to investigate the treatment patterns of carpal tunnel surgery.[1-4] In a survey carried out by Munns et al.,[3] members of the American Society of the Hand (ASSH) were asked about their surgical management regarding their preoperative workup, antibiotic use, operative technique, type of anesthesia and postoperative management. Peters and Giuffre[4] replicated Munns’ survey by asking similar questions to the Canadian Society of Plastic Surgery (CSPS) to assess practice differences with members of the ASSH.

In this study, we aimed to analyze the nationwide trends in carpal tunnel surgery by surgeons practicing in Turkey according to experience in years, training received (plastic surgery or orthopedics), and working location (Turkey or abroad) by slightly modifying Munns’ survey.

This study was conducted at Ankara University Faculty of Medicine, Department of Orthopedics and Traumatology, Division of Hand Surgery between May 2018 and August 2018. A printed and online survey consisting of 11 modified questions from Munns’ study was sent to Turkish and international surgeons who attended the Asian Pacific Federation of Societies for Reconstructive Microsurgery (APFSRM) 2018 Congress (Appendix A). Permission was granted by the APFSRM Organization Committee to distribute the survey. The online survey was also sent to Turkish orthopedic and plastic surgeons who were practicing hand surgery and did not attend the APFSRM congress. A total number of 590 survey invitations were sent electronically and 200 printed versions were distributed during the APFSRM congress. A brief explanation of the study was included at the beginning of the survey. All results were submitted anonymously. Incomplete surveys were not included in the analysis. The study protocol was approved by the Ankara University Faculty of Medicine Ethics Committee. A written informed consent was obtained from each participant. The study was conducted in accordance with the principles of the Declaration of Helsinki.

The surgeon’s province of practice (Turkey or international), years in practice, type of education received as a resident, preferred operation room for surgery, preferred surgical approach, type of anesthesia used, use of postoperative orthosis and therapy were assessed in the survey. Estimated completion time of the survey was two minutes.

Statistical analysis was performed with IBM SPSS version 22.0 software (IBM Corp., Armonk, NY, USA). Descriptive statistics of categorical variables were given in frequencies. Subanalyses were performed on variables such as the province of practice, years in practice, and type of education received as a resident. Comparisons of proportions were performed using the chi-square test. Statistical significance was set as p value less than 0.05.

The majority of surgeons practicing in Turkey and abroad demanded electromyography (EMG) and nerve conduction studies before surgery (87% versus 67%) (Table II). Sixty-one percent of respondents from Turkey and 76% of international respondents did not administer antibiotics preoperatively.

Approximately one-half of respondents in both groups routinely applied an orthosis postoperatively (Table III). Referral to physiotherapy (PT) after surgery was ordered by 37% of Turkish surgeons, compared to 45% of non-Turkish surgeons.

There was a statistically significant difference between years in practice and administration of preoperative antibiotics, EMG studies, surgical approach and, orthosis application (p<0.05). Surgeons practicing in Turkey with fewer than five years of experience were more likely to administer antibiotics preoperatively, use EMG/nerve conduction studies, utilize a mini-open approach and apply an orthosis postoperatively. There was no difference between type of the institution and the other parameters (p>0.05). There was a statistically significant difference between educational background and referral of patients to PT and utilization of orthosis (p<0.05). Surgeons who received plastic surgery training during residency were more likely to refer patients to PT and utilize orthosis.

To the best of our knowledge, this is the first study revealing carpal tunnel surgery trends in Turkey. The survey provided a better understanding of how carpal tunnel surgery was managed nationwide. Besides, we were also able to compare the current practice differences and similarities with the surgeons who were practicing in other countries (mostly from far-eastern countries). The 11-question format was modeled from Munns’ study to keep survey time shorter and to increase response rates. Comparison of our results with Munns and Peters was shown in Table IV.

Table 4. Comparison of survey results with Munns and Peters studies
×

Preoperative management of patients was not very different between Turkish and international respondents. Eighty-seven percent of Turkish surgeons and 67% of international surgeons use EMG/nerve conduction studies preoperatively. It was reported that routine use of these investigations by the ASSH members and Canadian surgeons is standard practice for approximately 70% of surgeons.[4] However, the AAOS guidelines indicate limited evidence to support the use of EMG as a diagnostic tool.[8] A possible explanation for notable use of EMG despite guidelines is to obtain objective evidence for legal issues before surgery. Thirty-nine percent of Turkish respondents and 24% of international respondents use preoperative antibiotics. When compared with the ASSH members, there is a similar rate of routine antibiotic use by Turkish surgeons (39% vs. 36%). Despite the literature suggesting that perioperative antibiotics for carpal tunnel surgery are not indicated,[9] these rates are still unexpectedly high.

The most common anesthetic techniques utilized by Turkish respondents were wrist block (18%), general anesthesia (17%), and WALANT (16%), respectively. The international respondents predominantly use WALANT (42%) for carpal tunnel surgery. Peters and Giuffre[4] reported that 54% of the CSPS members and 8% of ASSH members use WALANT. They attributed the difference in anesthetic type used between the CSPS members and the ASSH respondents to the availability of operating rooms staffed by an anesthetist, surgeon preference and educational background. Turkish surgeons were less likely to prefer WALANT because there is no local procedure room in many clinics and an anesthesiologist is often present in the general operating room. Foster et al.[7] reported that general or regional anesthesia cost $654 more than local anesthesia.

Despite the evidence showing that immobilization and referral to physiotherapy are not necessary, 47% of Turkish respondents apply orthosis, and 37% of respondents send their patients to physiotherapy.[10-12] These results were similar to the international respondents. It was reported that many ASSH and CSPS members failed to comply with the evidence-based guidelines in regards to postoperative management.[4]

We observed that less experienced surgeons were more likely to administer antibiotics preoperatively, use EMG/nerve conduction studies, utilize a mini-open approach, and apply an orthosis postoperatively. A possible explanation for these results may be that younger surgeons tend to continue the protocols of their department where they received residency training in the first years of their practice. Plastic surgeons were more likely to refer their patients to PT and apply orthosis postoperatively despite the current literature. This may be attributed to the difference in curriculum and perspective between orthopedics and plastic surgery disciplines.

There were several limitations to our study. Since the majority of respondents were from university hospitals, this survey may not represent nationwide preferences accurately. Besides, since orthopedic surgeons without hand surgery fellowship training and neurosurgeons performing peripheral nerve surgery were not included in the study, it may be concluded that the survey does not reflect national preferences. Moreover, as the majority of international respondents were mostly from Asian countries, one can question whether the participants were “international”. Lastly, although the survey could be completed in a short time, the response rate was only 25% and the 11-question format limited the amount of data gathered.

In conclusion, surveys do not contain scientific data from which strong conclusions can be established on the efficacy of management. However, surveys help us to understand current practice patterns. Since there were no previous studies evaluating nationwide preferences in carpal tunnel surgery, it was not possible for us to compare trends over time. Nevertheless, our study showed that there are comparable differences between Turkish and international surgeons regarding pre- and postoperative management of carpal tunnel surgery. We conclude that province of practice, years in practice, and type of education received as a resident have influence over the management of carpal tunnel syndrome. 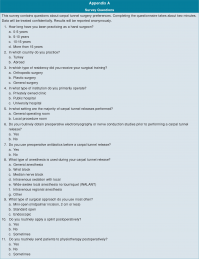 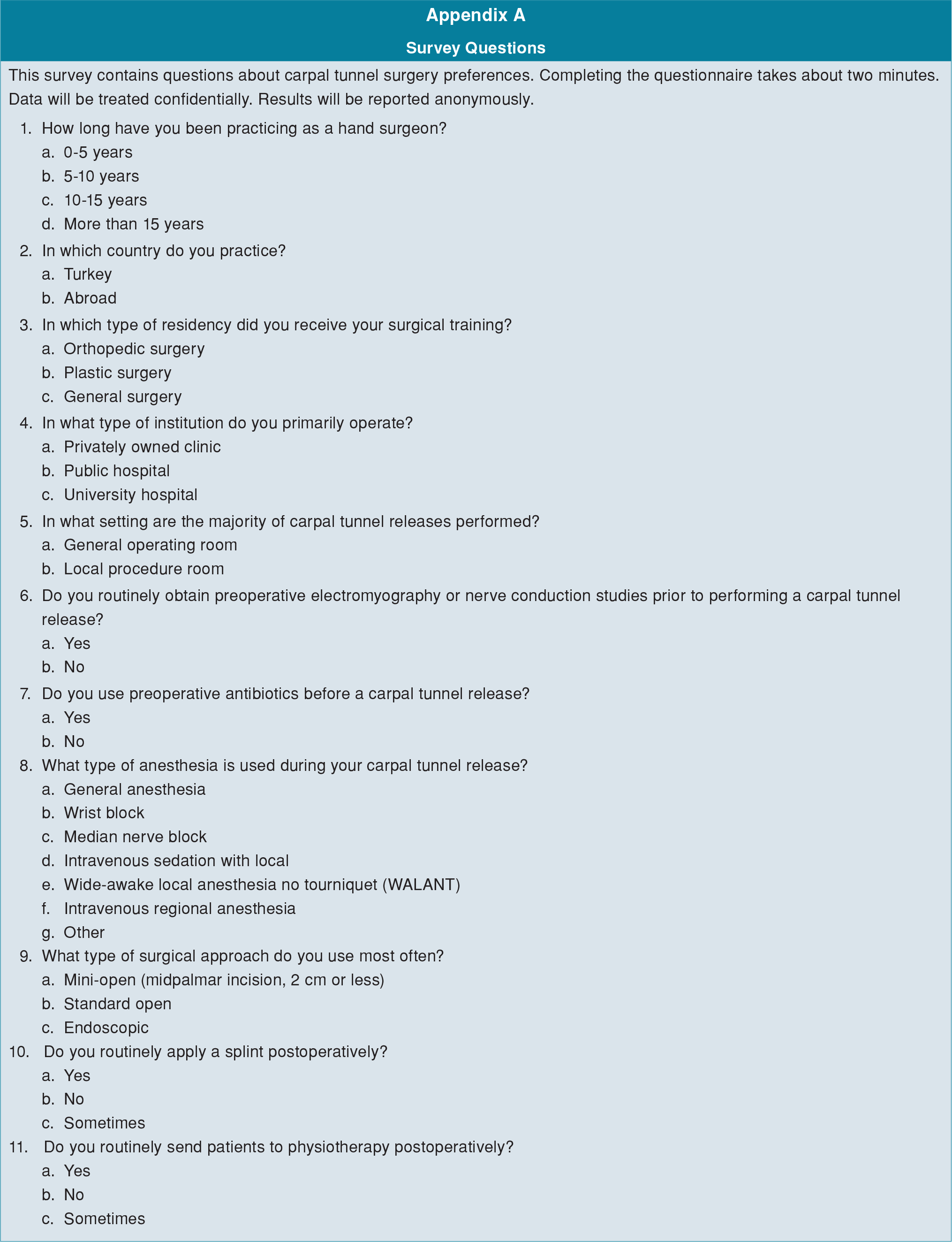