Objectives: This study aims to investigate the usability and reliability of our new axis in a three-dimensional modelling work and demonstrate if it is a reproducible method for anteversion measurement that sufficiently correlates with other computed tomography (CT)-derived gold standards including trans- epicondylar axis (TEA) and posterior condylar axis (PCA).

Conclusion: Our findings suggest that the newly defined PSA may be used as an alternative method for determination of anteversion.

For the distal reference axis in femoral anteversion determination, the posterior condylar axis (PCA) which uses the most posterior points of the medial and lateral epicondyles is mostly used.[1] Alternatively, we may use a trans-epicondylar axis (TEA) which is defined as a line between the most prominent points of medial and lateral epicondyles.[2] However, it has been known that bone and cartilage loss and/or the osteophyte formation in the osteoarthritic knee with aging affects both PCA and TEA.[2,3] Furthermore, the determination of anteversion is very challenging in case of destruction of one or two condyle due to mass, infection or fracture. In these conditions, both PCA and TEA become unreliable. To eliminate these concerns, a new distal reference axis has been proposed. We hypothesized that a new distal reference axis based on popliteal surface may be used as an alternative reference axis for hip anteversion determination. The femur in its distal third, the shaft has a flat triangular posterior surface (i.e., popliteal surface) between the medial and lateral supracondylar lines, which is continuous above with the corresponding edges of the linea aspera.[4] The new axis has been defined on this surface as a transverse line between supracondylar ridges and four centimeters proximal to the intercondylar line and we call it as popliteal surface axis (PSA). In this study, we aimed to investigate the usability and reliability of our new axis in a three-dimensional (3D) modelling work and demonstrate if it is a reproducible method for anteversion measurement that sufficiently correlates with other computed tomography (CT)- derived gold standards including TEA and PCA.[5]

This study was conducted at Pamukkale University Faculty of Medicine Hospital between July 2015 to December 2015. We designed an analytical and observational cross-sectional survey study regarding anteversion measurement using CT-derived values. The left femoral CT data of 100 participants (50 males, 50 females; mean age 57 years; range, 21 to 86), which were taken from whole body scans during positron emission tomography examination for another reason, were used. Inclusion criteria were a standard protocol used while taking CT scans (12 kV, 195 mAs), the whole femur scan including adjacent joints being in a single field of vision, a scanning resolution of 512×512 pixels, the scanning being sequential and in a standard slice thickness of 5 mm thick and 5 mm apart, and age more than 18 years. Exclusion criteria were excessive osteoporosis on whole bone models as a result of aging or previously taken chemotherapy or radiotherapy etc., previous operations or a present deformity or metallic objects/implants on the lower extremity and/or pelvis, any involvement of tumoral lesion and/or metastatic lesion in lower extremity and/or pelvis. The study protocol was approved by the Pamukkale University, Faculty of Medicine Ethics Committee (Date: 10/07/2015; No: 60116787-020/41032). A written informed consent was obtained from each patient. The study was conducted in accordance with the principles of the Declaration of Helsinki.

Figure 1. Establishment of points, axes and planes on a three-dimensional (3D) model for angle measurements in distal femur; (a) in 3D space, (b) in posterior-anterior view and (c) in cranio-caudal view.
× 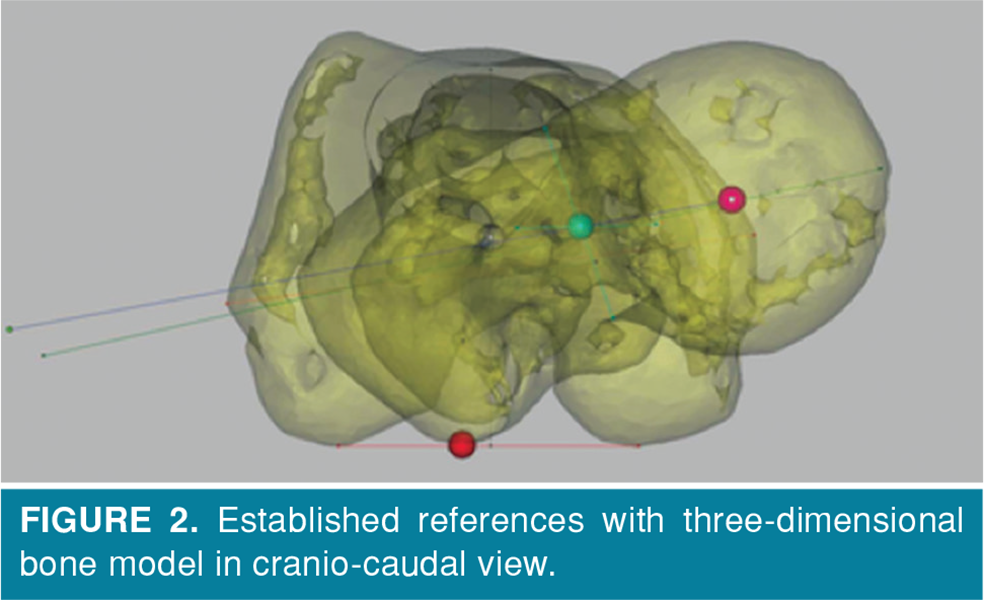 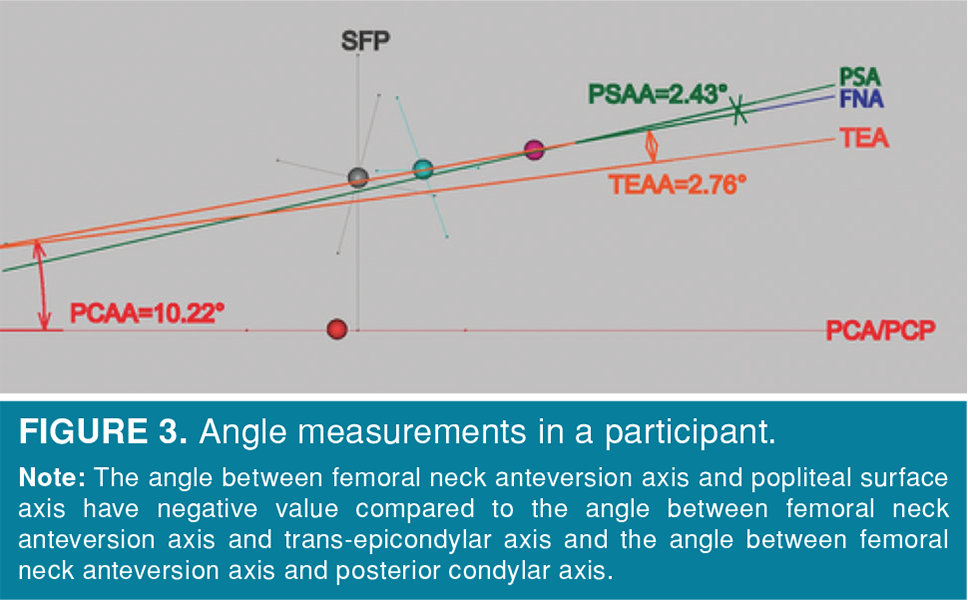 We used the PASW version 18.0 software (SPSS Inc., Chicago, IL, USA) for statistical analysis. Independent samples t-test was used for comparison of the dichotomous data. Test correlations were performed with Pearson correlation method. The measurements of two authors that were conducted six months apart were used for intra- and inter- observer consistency analysis. Intra-observer consistency analysis was established with intra- class correlation coefficient whereas inter-observer with Kendall’s tau. We did not perform any a priori power analysis. A p<0.05 was considered as statistically significant.

The mean age of the participants was 60 years in males (range, 23 to 84 years) and 54 years in females (range, 21 to 86 years). We were unable to detect the PSA in only one participant as there were two surfaces on the popliteal surface and this participant was subsequently excluded from the study. Therefore, the establishment rate of PSA was 99%.

The mean values of PCAA, TEAA and PSAA were summarized in Table I. The mean PSAA had negative value of (-) 1.8° compared to TEAA (4.4°) and PSAA (10.7°). These values were not statistically different according to gender. Age did not affect these values either.

The correlations of PCAA, TEAA and PSAA were summarized in Table III. All were perfectly correlated with each other: every 1° change in PCAA resulted in 1° change in TEAA and 0.9° in PSAA (Figure 4).

Table 3. The correlations of PSAA, PCAA and TEAA
× 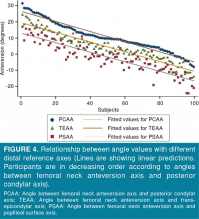 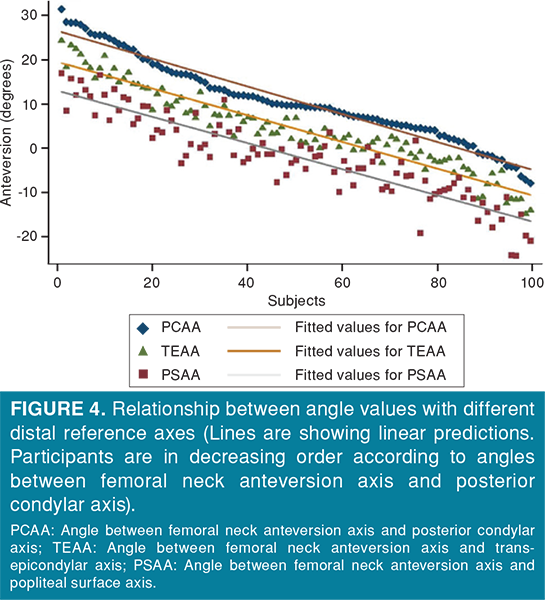 The most important finding of the present study was that the newly defined PSA perfectly correlated with gold standards and may be a good alternative method for anteversion determination. Furthermore, the establishment rate of PSA was 99%.

Posterior condylar axis-PSA had an average of 12.5° in our study which was 6.2° for TEA-PSA. PCA-TEA was affected from age unlike PCA-PSA and TEA-PSA. The effect of age on PCA-TEA may be attributed to bone and cartilage loss and/or the osteophyte formation in the osteoarthritic knee which increases with aging.[2,3] In contrast, PSA related measurements were not affected as the PSA is a metaphysis-based reference axis.

Among previous studies on anteversion using PCA in which the race and/or the gender were taken into consideration, Reikerås et al.[9] found an average version of 10.2° in males and 10.7° in females in 48 pairs of normal cadavers in Norwegians. They discovered no significant difference between genders. In a cadaveric study by Hoaglund and Low[10] who compared Caucasians and Chinese, anteversion angle had an average of 7.1° in males and 10.8° in females among Caucasians which were 14.1° and 16.8°, respectively, among Chinese. Koerner et al.[11] showed that the mean anteversion values of males were 7.9° for Caucasians, 9.0° for African Americans and 8.7° for Hispanics in their CT study consisting 411 femurs. These values were 12.9°, 8.2° and 8.7° for females, respectively. They detected no significant differences between genders across ethnicities. Moreover, Chantarapanich et al.[12] reported a value of 8.7° for males and 10.8° for females in their study of Thai people and found a statistical significance in gender differences. In a CT-derived study from Turkey, Akalin et al.[13] found 9.3° and gender difference was not reported. In our study, the mean anteversion value was 10.7° which was 9.4° for males and 12.1° for females. Thus, the results of our study were similar to those of the previous studies.

Most of the literature assessing the rotational alignment of the distal femur in total knee arthroplasty use PSA-TEA which is also named as the condylar twist angle.[13-15] For Caucasians: Arima et al.[14] found a mean value of 5.7° in CT measurements which was 4.4° in cadaveric measurements. Mantas et al.[16] reported a mean value of 4.9° in their cadaveric study which was 4.4° in males and 6.4° in females. The gender difference was statistically different in their study. In contrast, Wright et al.[15] reported 6.7° in their CT-based 3D modelling studies similar to us (in 30 males and 30 females). The females and males had the same mean value in their study. For Asians: Yoshioka et al.[2] reported a mean of 5° in females and 6° in males in their cadaveric study; however, the difference was not statistically significant. Sathappan et al.[17] reported a mean of 6.9° without gender discrimination. Park et al.[18] reported 6° in non- tibia vara group (94% females) in their magnetic resonance study. Our study showed a mean value of 6.3° which is comparable with previous results again. Meanwhile, females had a mean value of 6.2° which was 6.5° for males and the difference was not statistically significant.

The main downside of our reference axis is that it is mainly available by CT and rarely noticed because of its anatomic location. Furthermore, the technical limitation of our study is the subjective nature of point selection for measurements of angles and its inherent error. The models were derived from 5 mm thick and 5 mm apart sequential CT data which reduce resolution.

In conclusion, our findings suggest that the newly defined distal reference axis in anteversion determination may be used as an alternative measurement. We believe that further research needs to be performed on this topic for clinical use and to reveal the importance of PSA.