Objectives: This study aims to compare the effectiveness and safety of intra-articular hyaluronic acid (HA) injections of ArtiAid®-Mini (AAM) and Ostenil®-Mini (OM) for the treatment of trapeziometacarpal joint osteoarthritis.

Patients and methods: Between February 2018 and April 2020, this 24-week, double-blind, prospective, randomized, non-inferiority trial included a total of 17 patients (8 males, 9 females; mean age: 60.3±9.5 years; range, 42 to 76 years) who were treated with either intra-articular AAM (n=8) or OM (n=9). The primary outcome was pain according to a change in Visual Analog Scale (VAS) at 12 weeks after the last injection. The secondary outcomes included the change of VAS at Weeks 2, 4, and 24 after the injection, satisfaction, range of motion (ROM) of trapeziometacarpal joint, pinch strength, grip strength, and adverse events at Weeks 2, 4, 12, and 24 after the injection.

Conclusion: The intra-articular injection of either AAM or OM is effective and safe for patients with trapeziometacarpal osteoarthritis up to 24 weeks.

Osteoarthritis (OA) of trapeziometacarpal (TMC) joint (rhizarthrosis) is frequent in middle and old age population. The prevalence of TMC OA in women is twice that in men, and this disease particularly affects post-menopausal females.[1] It may cause pain, deformity, and functional disability with impact on the quality of life. Conservative treatment options include non-pharmacological therapies (i.e., resting, immobilization with splint, orthoses, and physical therapies) and pharmacological treatments (i.e., analgesics, non-steroidal anti-inflammatory drugs [NSAIDs] and corticosteroid, hyaluronic acid [HA], or plate-rich plasma injection). Surgery is the last resort for patients with severe disability from OA who were failed by conservative treatments.[2]

Hyaluronic acid is normally formed in the synovial fluid of joints and plays an important role in the biomechanics of synovial fluid by enhancing the viscoelastic and lubricating functions of the joints.[3] Thus, intra-articular HA has a significant effect on the pain and function improvement of OA and is recommended for the management of OA in knee, hip, and other joints.[4,5] Intra-articular HA injection is a safe alternative therapeutic option for TMC OA and has been widely clinically applied. However, recent meta-analysis and systemic reviews have revealed the scientific evidence on the efficacy of intra-articular HA in TMC OA as equivocal and inconclusive due to the great heterogeneity of clinical trials, and many of its effects have not been investigated clinically.[6]

In the present study, we aimed to investigate the effectiveness and safety of intra-articular HA injections of AAM and OM for the treatment of TMC OA. The null hypothesis of this study was that there would be no significant difference in subjective measurement (Visual Analog Scale [VAS], satisfaction), objective measurement (range of motion [ROM], pinch and grip strength) and adverse events in TMC OA patients receiving intra-articular AAM injections compared to OM.

This multi-center, double-blind, comparative, prospective, positive-control, randomized, non-inferiority trial was conducted at Department of Orthopedics of two tertiary care centers between February 2018 and April 2020. All patients with TMC OA were screened. Inclusion criteria were as follows: aged 35 years and above; having clinical symptoms (TMC joint pain, joint stiffness, decreased mobility, deformity, instability, functional impairment) and radiological observations indicative and typical of TMC OA (Eaton and Litter Stage II or III); having a VAS score of pain ≥4 for over three months; painresistant to well-conducted medical treatments (rest, physical therapy, orthosis, analgesics or NSAID) or intolerant of medical complications and willing to discontinue medications except for acetaminophen or acetylsalicylic acid (<325 mg/day), could practice contraception during the study; and could understand and receive the protocol and signed the informed consent. Exclusion criteria were as follows: having bilateral TMC OA; having known alcoholism; having previous HA injection less than six months ago; having previous intra-articular injections of corticosteroids or glycosaminoglycans less than three months ago; having known allergy to hyaluronate or one of the products; having localized infection; having hemarthrosis or joint effusion, joint infection, immunodeficiency, cachexia, and uncontrolled diabetes or using anticoagulant; having coexisting interphalangeal OA; having previous thumb or wrist surgery; pregnant or lactating; and unable to follow the protocol according to the investigators’ judgment. Finally, a total of 17 patients (8 males, 9 females; mean age: 60.3±9.5 years; range, 42 to 76 years) including eight with AAM and nine with OM were included (Figure 1). 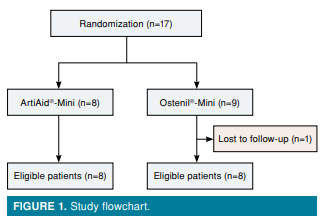 A computer-based program was used to randomly assign the enrolled patients to one of the two treatment groups, namely, AAM (n=8) or OM (n=9) in a 1:1 ratio. Assignment remained unknown to the patients and clinical evaluators throughout the duration of their participation in this study.

The patients were injected with HA of either 1 mL of AAM (10 mg/mL) or 1 mL or OM (10 mg/mL) according to their allocation. The injection material was drawn into a standard 1 mL syringe, out of sight of the patient and clinical evaluator. An opaque label was placed on the syringe to cover the injection material and ensure blinding during the injection. All the injections were administered by a single experienced specialist and performed under ultrasound-guided procedures (5-10 MHz, SonoSite, Bothell, WA, USA) following a previous technique.[10] All participants received a second injection after one week.

All the patients were scheduled for follow-up visits at Weeks 2, 4, 12, and 24 after the second injection. The VAS (0-10), satisfaction survey (1-5), and ROM of TMC joint and grip and pinch strength tests were repeated in the same way as the initial assessment. Pre-trial evaluations, functional outcomes and safety assessment for study participation were screened and assessed by a single orthopedic surgeon and a hand therapist, who was blinded to the method of injection applied and had no involvement in the injection procedure.

Statistical analysis was performed using the SAS version 9.4 software (SAS Institute Inc., Cary, NC, USA). Continuous data were expressed in mean ± standard deviation (SD) or median (min-max), while categorical data were expressed in number and frequency. Between groups comparison was analyzed using the independent t-test, whereas the difference between baseline and each post-injection point in each group were assessed by a paired t-test. Categorical data between the groups were compared through the chi-square or Fisher exact test. Post-hoc test was carried out to determine the factors of significance. A p value of < 0.05 was considered statistically significant.

No significant differences in the satisfaction measurement were observed between and within the two groups (Table III).

Range of motion of trapeziometacarpal joint

During follow-up, one patient had incontinence and vaginal disease in the AAM group, and one patient had balanoposthitis in the OM group. These conditions were not related to HA injection. No nematoma, tendon laceration, nerve injury, vascular damage, infection, and other complication were observed.

Finally, eight patients in the AAM group and eight patients in the OM group completed the follow-up in this study through clinical examination. No significant differences in the VAS, satisfaction, ROM of TMC joint (flexion, extension, and abduction), and pinch and grip strength were observed between the groups at baseline and each time point. The VAS score improved significantly at two-week post-injection and continued throughout the follow-up period. The flexion, extension, abduction, and pinch and grip strength were significantly improved at two-week post-injection.

In the present study, we compared the outcomes of ultrasound-guided intra-articular HA injections of AAM to OM for the treatment of carpometacarpal OA. In our study, there was no statistically significant difference in the subjective measurement (VAS, satisfaction), objective measurement (ROM, pinch and grip strength) and adverse events between the two groups at baseline and each follow-up time point.

Hyaluronic acid is naturally present in synovial fluid and maintains hemostasis in the joint.[12] The HA concentrations are decreased in OA joints.[13] Different HA formulations present varying properties depending on their concentration and molecular weight. The HA is classified into three molecular weight groups: low (<1,500 KDa), intermediate (1,500-3,000 KDa), and high (>3,000 KDa). The size of HA has a direct impact on its binding affinity to CD-44 receptors. High-molecular-weight HA (HMWHA) is favorable for the increased production of inflammatory cytokines and chemokines, recruitment of inflammatory mediators, formation of blood vessels, and CD-44-mediated effects of chondroprotection, proteoglycan/glycosaminoglycan synthesis, anti-inflammatory, subchondral bone compliancy, mechanical, and analgesic. The HMWHA provides greater therapeutic benefits than low-molecularweight HA (LMWHA), but no consensus has been reached regarding the clinical efficacy difference between these two.[14,15] The HMWHA and HA cross-linked formulation are more frequently associated to local reactions and post-injection flares than intermediate or low MWHA.[16,17] In the present study, the effectiveness and safety of AAM and OM, both LMWHA, were confirmed.

No evidence is available regarding the direct influence of the number of joint injections on the occurrence of side effects.[18] A study compared the therapeutic mid-term effect of a single intra-articular HA injection versus three injections of LMWHA.[19] Both groups experienced pain relief, disability improvement was found mainly in the group receiving three injections, and no significant differences in evaluated outcomes were observed between the groups. The present study used two injections of intra-articular HA and attained significant and lasting pain and function improvements.

The injection of intra-articular HA under ultrasound guidance is simple, rapid, economic, and safe. It allows the easy visualization of the joint and ensures that the HA is injected properly inside the joint cavity.[20] In a prospective study, Karalezli et al.[21] showed that pain and discomfort were frequent during injection and reported a major degree of pain experience by the subjects in the nonfluoroscopy control group. In the present study, the whole injection procedure was under ultrasound guidance and performed by an empirical physician.

Nonetheless, this study has some limitations. First, the sample size is relatively small and the study did not include a control group receiving placebo. As a result, the validity and generalizability of the results should be interpreted cautiously. Second, the study was performed at two tertiary medical centers, and only patients with Eaton and Litter Stage II-III were recruited. Therefore, the results cannot be generalized to the entire populations with different degrees of radiologically evident severity. Further multi-center studies with a large sample size are required.

In conclusion, our study results show that the effectiveness and safety of AAM administered once a week for two weeks are comparable with those of OM. Further studies are warranted to draw more reliable conclusions on this subject.

The study protocol was approved by the Institutional Review Board of the E-Da Hospital Ethics Committee (date: 07.12.2017, no: EMRP03106N). The study was conducted in accordance with the principles of the Declaration of Helsinki.

This trial was sponsored by Maxigen Biotech Inc., the manufacturer of ArtiAid®-Mini.