Objectives: The aim of this study was to evaluate the factors that influenced one-year and five-year mortality and to compare major and minor amputations in diabetic patients with comorbidities.

Conclusion: Minor amputations have an effect on one-year mortality, as do cerebrovascular disease and age. On the other hand, chronic renal failure has a negative impact on five-year mortality. Minor amputations may have a detrimental effect on mortality due to the ongoing progression of diabetic foot disease and the involvement of comorbidities. Comorbidities associated with amputations of the diabetic foot have a significant impact on mortality.

Diabetes mellitus (DM) is a serious global health issue and one of the most prevalent morbidities, impacting 366 million individuals worldwide in 2011.[1] This number is expected to rise to 552 million by 2030.[1] Most of the patients with chronic illnesses did not have a regular follow-up during the pandemic due to individuals’ fear of getting the virus or self-isolation regulations.[2] Patients with DM have a lifetime risk of up to 25% of developing diabetic foot; however, approximately 60 to 80% of patients’ foot ulcers heal, while 10 to 15% do not progress and 5 to 24% eventually require a limb amputation.[3]

In the present study, we aimed to investigate the effect of comorbidities on the long-term mortality following LLA in patients with type 2 diabetes.

This single-center, retrospective study was conducted at Bozyaka Training and Research Hospital, Department of Orthopedics and Traumatology, Diabetic Foot Care Unit between February 2008 and November 2014. We analyzed the medical records of diabetic inpatients with a diagnosis of diabetic foot infection admitted to our clinic. A total of 201 type 2 diabetic foot patients (147 males, 54 females; median age: 65.99 years; range, 50 to 92 years) who underwent amputation were included in this study. Patients younger than age 50 years or with traumatic or peripheral arterial disease-related amputations were excluded from the study. All patients were divided into two groups according to their initial amputation level: Group 1 (n=100), minor amputation group, which included the distal region of the ankle joint and Group 2 (n=101), major amputation group, which included trans-tibial amputation, trans-femoral amputation and hip disarticulation.

Clinical data including patients' demographic features, re-amputation degree (if appropriate), length of hospitalization, hyperbaric oxygen therapy (HBOT), comorbidities, blood parameters, and survival rates were recorded. As a final step, the National Death Reporting System was accessed online to verify the latest information on patients who died following amputation and data on mortality rates were obtained from this resource.

Statistical analysis was performed using the IBM SPSS version 20.0 software (IBM Corp., Armonk, NY, USA). Descriptive data were expressed in median (min-max) for continuous data and in number and frequency for categorical data. The chi-square and Fisher exact tests were used to compare categorical data, after checking normality tests with the Kolmogorov-Smirnov test. The Mann-Whitney U and Kruskal-Wallis tests were used, if the data were not normally distributed. Factors affecting mortality were determined by using the KaplanMeier analysis. The effects of factors on mortality were analyzed by regression analysis. A p value of <0.05 was considered statistically significant.

According to the patients’ comorbidities, 114 patients (56.7%) had several comorbidities. Hypertension (HT), coronary artery disease (CAD), and chronic renal failure (CRF) were the three most frequent comorbidities.

When the patients' survival data and other clinical parameters were analyzed, 117 (58.2%) patients died during the follow-up period. The patients who died had a median survival time of 32.4 (range, 0 to 103) months (Figure 1). 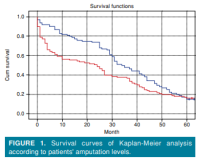 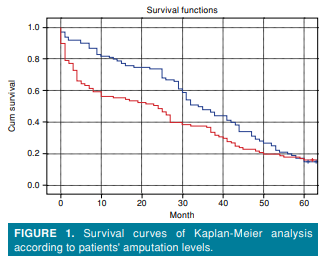 Diabetes mellitus is a chronic metabolic disorder that affects many physiological systems in the body. Uncontrolled or poorly controlled DM is a risk factor for infection development. Diabetes mellitus is a systemic disease associated with an increased incidence of morbidity and mortality. The treatment period for ulcers is long, and poor treatment may lead to extremity amputations. Due to the amputation and high mortality rates, diabetic foot has received more attention as a severe complication related to DM. There are many causative agents, treatment modalities, and risk factors for amputation of the extremities in patients with diabetes in the literature.[7-9] Type 2 diabetes mostly goes without realizing for many years; thus, most of the patients eventually develop diabetic foot ulcers as a result of peripheral arterial occlusions, which is a risk factor for diabetic foot amputations as a late complication of DM.[10-13] In the current study, we analyzed type 2 diabetes patients who underwent amputation due to diabetic foot and identified whether comorbidities had an effect on mortality rates at up to five years of after amputation.

Mortality after diabetic foot amputation can be as high as 70% after five-year follow-up.[4] In addition, associated morbidities, such as cardiovascular diseases and chronic renal diseases are more common in patients with diabetes than in patients without diabetes.[14-16] Patients in this study had at least two comorbidities, the majority of which were HT, CAD, or CRF. Amputations lead to much more cardiac and metabolic load, and, with the combination of older age and comorbidities, we concluded that the one-year and five-year mortality rates were particularly high in this group of patients. Cerebrovascular disorders were found to have the greatest impact on first- and fifth-year mortality rates. Chronic renal diseases were identified as a significant factor determining five-year mortality rates. Although determining whether current comorbidities are the cause or effect is challenging, we can speculate that comorbidities significantly increase mortality.

Perez-Favila et al.[17] reported in the study that managing diabetic foot patients was extremely challenging and that the fatality rate and healthcare expenditures associated with amputation were gradually increasing. The review focuses on tissue engineering and regenerative medicine strategies that address all components of chronic wound disease collectively. Numerous review studies have reported on viewpoints about wound care and vascular diseases.[18,19] However, we observed that these patients did not only have chronic wound ulcers and amputations. We believe that managing these individuals is challenging, since they are affected by not just diabetes and complications, but also a variety of comorbidities. In this context, we observed that the length of hospitalization varied according to the extent of amputation and the presence of comorbidities. We consider that multidisciplinary collaboration is the most critical component of patient management.

According to Saluja et al.,[20] patients with diabetic foot ulcers had a higher overall mortality than those without foot ulcers. They concluded that early management was critical to prevent foot ulceration and modify risk factors for cardiovascular disease to avoid excessive mortality. In the meta-analysis conducted by Brownrigg et al.,[21] the coexistence of cardiovascular diseases with diabetic patients was the most important risk factor on mortality. In comparison to the literature, this study demonstrates that CRF has a considerable effect on mortality after one year. In our study, a one-unit increase in age increased mortality by 1.05 times in individuals with diabetic foot ulcers.

Thorud et al.[22] revealed in their study that the five-year mortality rates for individuals who underwent major and minor amputations were quite high, ranging from 53 to 100%. However, additional studies are needed to determine whether amputation accelerates death or is a marker for underlying disease severity. Based on our regression analyses, minor amputations increased one-year mortality. We attribute this situation to vasculopathy, neuropathy, and the continuation of the secondary infection process, which are possible to encounter in diabetic foot process. As a result, reoperations may increase the short-term mortality of patients with many comorbid factors. Therefore, major amputations may be preferred in selected patients, taking into account the comorbid factors and functional evaluations of the patient.

Although there are many studies on diabetic foot ulcers in the literature, we believe that the present study provides additional contribution to the literature by evaluating both the number of patients, the length of the follow-up period, and the comorbid factors by regression analysis. However, its single-center, retrospective design is the main limitation and further multi-center, large-scale, prospective studies are needed to draw more reliable conclusions on this subject.

In conclusion, despite decades of technological and medical advances, our study results indicate that high mortality rates remain following amputation in diabetic patients with comorbidities. Minor amputations may have a detrimental effect on mortality due to the ongoing progression of diabetic foot disease and the involvement of comorbidities.

The study protocol was approved by the Health Sciences University Izmir Bozyaka Training and Research Hospital Clinical Research Ethics Committee (date: 22.09.2021, no: 2021/163). The study was conducted in accordance with the principles of the Declaration of Helsinki.