Objectives: This study aims to compare the morphometric differences between patients with and without an anterior cruciate ligament (ACL) injury and to investigate the anatomical risk factors associated with ACL injury.

Anterior cruciate ligament (ACL) injury is a common injury, particularly in young active individuals, with an increasing incidence.[1] Individuals undergoing ACL reconstruction can return to their former activity level only in the long term and with great effort.[2] Although the rate of return to sports after ACL reconstruction seems to be high, particularly sports requiring pivot movement, patterns increase the risk of graft and contralateral ACL rupture in individuals undergoing ACL reconstruction, while the risk of osteoarthritis in the long term is high in these individuals.[3,4] Preventive measures should be focused on before the development of ACL injury.[5]

Since it is not fully known which morphometric features play a role together, the current study was designed to investigate the role of these features in ACL injury and contribute to the literature regarding this subject. In the present study, we, therefore, aimed to measure the morphological parameters and identify the potential morphological risk factors associated with ACL injury, to compare the morphological differences between individuals with and without ACL injury, and to discuss the anatomical risk factors using magnetic resonance imaging (MRI).

This single-center, retrospective, case-control study was conducted at Konya City Hospital, Department of Radiology between February 2020 and February 2022. The study groups were selected from patients aged between 20 and 40 years who were operated for isolated non-contact ACL tear (patient group) and healthy individuals without an ACL tear (control group). The sample size was selected from a group of 400 controls and 100 cases using the propensity score matching method to include 100 homogeneous participants in each group. The homogeneity of the age, sex, body mass index (BMI), and side variables was ensured also with propensity score matching. Patients with previous knee surgeries, previous knee fractures in or around the knee, rheumatologic diseases, previous infections in the knee joint, knee pathologies affecting the intraknee structures (such as osteoarthritis), and patients with multiple ligament injuries in the knee were excluded from the study. Finally, the patient group included a total of 100 patients (57 males, 43 females; mean age: 36.2±6.8 years; range, 18 to 45 years) and the control group included a total of 100 healthy individuals (58 males, 42 females; mean age: 35.0±6.9 years; range, 18 to 45 years).

A musculoskeletal radiologist with more than 10 years of experience in sports surgery examined the MRI scans of the patients, and the morphological parameters were measured using the standard techniques previously described in the literature.[17-25] The physician who performed the measurements was blinded to the patient records. All measurements were made once by a single physician. Whether the ACL was intact in both the control group and the patient group was determined by MRI scans, and no arthroscopic confirmation was performed. Uninjured contralateral knee MRI were used for measurement in the patient group. Knee MRI, in which the control group had no complaints, were used for measurements. 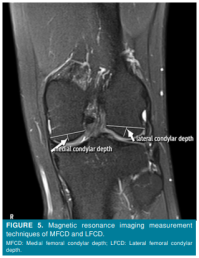 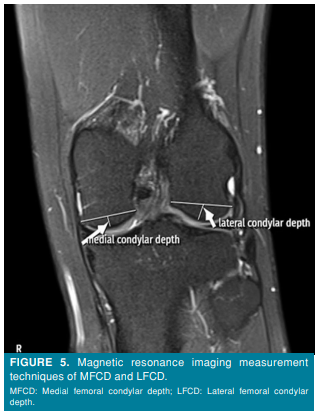 Statistical analysis was performed using the IBM SPSS version 28.0 software (IBM Corp., Armonk, NY, USA). Descriptive data were expressed in mean ± standard deviation (SD), median (min-max) or number and frequency, where applicable. The normality of the variables was checked using the KolmogorovSmirnov test. The Mann-Whitney U test was used for the comparison of the quantitative data, while the chi-square test was used for the comparison of the qualitative data. Univariate and multivariate logistic regression analyses and receiver operating characteristic (ROC) curves were used to show the effect level. A p value of <0.05 was considered statistically significant.

The patient and the control group were homogeneous in terms of demographic characteristics (p>0.05, Table I).

Table 1. Demographic data of the participants
×

The patients with an ACL tear had significantly higher ACLW, BA, ATT, LTPS, MFCW, LFCW, MFCD, LFCD, DFW, and IFW values than the control group, but significantly lower ACLL, ACLIA, NWI, MMBA, and LMBA values (p<0.05). The ISI and MTPS did not significantly differ between the two groups (Table II).

Table 2. Distribution of the demographic data and measurement parameters by group
×

The results of the univariate model confirmed the significant effect of the ACLL, ACLW, ACLIA, ATT, LTPS, MFCW, LFCW, MFCD, LFCD, NWI, DFW, IFW, MMBA, and LMBA values in the differentiation of the patients with and without an ACL tear (p<0.05) (Table III).

The multivariate regression model confirmed the significant independent effect of the ACLIA and MMBA values in the differentiation of the patients with and without an ACL tear (p<0.05) (Table III).

In addition, BA, ACLIA, LMBA, ACLW, MMBA, ATT, MFCD, MFCW, IFW, LTPS, LFCD, NWI, LFCW, DFW, and ACLL could predict ACL injury. The ISI and MTPS values did not have a significant prediction power in the differentiation of patients with and without an ACL injury. Table III shows the predictive levels of measured parameters from highest to lowest (Table IV).

Table 4. Predictive powers of the morphological measurement parameters regarding ACL injury (from highest to lowest)
×

The present study revealed the relationship between ACL injury and morphometric features of the knee. According to the univariate model, a smaller ACLL, ACLIA, MMBA, and LMBA and a greater ACLW, ATT, LTPS, MFCW, LFCW, MFCD, LFCD, NWI, DFW, and IFW were associated with an ACL injury. On the other hand, the results of the multivariate analysis indicated that smaller ACLIA and MMBA values were independent risk factors for ACL injury.

Several studies have shown that morphometric features of the knee may predispose to ACL injury.[7-16] Recent findings have indicated that the combination of morphometric features may be utilized in further elucidating the mechanism of ACL injury.[26] Bayer et al.[27] reported that intercondylar notch stenosis, sagittal condylar shape variations, increased tibial slope, decreased tibial eminence size, poor tibiofemoral alignment, and decreased ACL size were the risk factors for ACL injury. In a study investigating the structural predisposition for ACL injuries, Kızılgöz et al.[16] showed that NW, NWI, and medial tibial slope (MTS) were the risk factors for ACL injuries. Since our study differs from other studies in terms of design, our results are also different. The study closest in design to our study is that of Shen et al.[15] in which the authors reported the multiple variance analysis of the variables that might be anatomical risk factors for ACL injury in active individuals. The aforementioned authors reported that increased TT-TG distance, increased MTS, and decreased NWI could be independent risk factors for ACL injury in active individuals, although they provided no information about ACLL, ACLW, ACLIA, and meniscus bone angle measurements. In the current study, ACLIA and MMBA were found to be morphometric variables associated with an ACL injury.

Hudek et al.[28] reported that meniscus morphology was associated with ACL injuries, showing that the angle between the horizontal plane and the line passing through the tips of the anterior and posterior horns was associated with ACL injuries. However, the number of studies investigating the relationship between the meniscal bone angle and ACL injuries is limited. These studies mostly focus on LMBA, reporting that this morphometric feature may be a factor in ACL injuries.[26,29] On the other hand, the results of studies investigating MMBA suggest that there is no relationship between MMBA and ACL injury.[27] Contrary to the literature, our results indicate that small MMBA is a risk factor for ACL injury.

The angular relationship of the ACL with the femur and the tibia is particularly important in the anatomical placement of the graft during reconstruction and has been a subject of research on surgical techniques.[20] A limited number of studies have investigated the relationship between the angulation of the ACL with respect to the femur and the tibia and ACL injuries.[16,29] Sauer et al.[29] reported that individuals with ACL injury had a high beta angle, while the alpha angle has not been found a predisposing factor for ACL injury.[16] However, to the best of our knowledge, there is only one prospective study investigating whether ACLIA is a risk factor for ACL injuries, in which Adhikari et al.[30] found ACLIA and BA to be sensitive and specific for ACL injury. Our results suggest that one of the main risk factors for ACL injury can be small ACLIA.

Nonetheless, this study has some limitations. First, it did not confirm ACL rupture by arthroscopy in the patient group, which may have resulted in the acceptance of intact ACLs as ruptures. The second is the fact that the measurements were made by a single musculoskeletal radiologist, which may have caused the inter-observer and intra-observer bias. Another limitation is that the variables associated with ACL inclination were performed on sagittal images. However, variables associated with ACL inclination can be evaluated by measuring on both sagittal and coronal MRI sequences. This may have caused measurement errors. In addition, other intrinsic and extrinsic factors such as the activity level that are risk factors for ACL rupture could not be measured and included in the analysis. However, the effect of other intrinsic and extrinsic risk factors may limit the effectiveness of morphometric variables, which were observed to be effective in differentiating ACL injury from healthy knees as a result of the study.

In conclusion, our study results demonstrate that small ACLIA and MMBA can be considered independent factors for ACL injury in active individuals. This information can be useful in identifying individuals who may suffer an ACL injury. In addition, the consideration of ACLIA as a risk factor and the preparation of the tunnel accordingly for graft placement during reconstruction may prevent graft rupture.

The study protocol was approved by the Necmettin Erbakan University Ethics Committee (date: 04.02.2022, no: 2022/3643). The study was conducted in accordance with the principles of the Declaration of Helsinki.

Informed consent was not obtained from the participants due to the retrospective design of the study and the anonymous analysis of the data.