In this article, we present two cases with rarely seen CAF complications following hip arthroplasty operations. One is with extracting gas from the cutaneous fistula after multiple revision THA operations and one is after bipolar hip hemiarthroplasty (BHH) with radiation therapy as a possible etiological factor.

Case 1- A 50-year-old female patient had THA 15 years ago at the age of 35 years for developmental dysplasia of the hip in an external center and, then, she had revision twice in another hospital. Her last revision THA operation was performed by using acetabular mesh and cage five years ago in another center. There was a cutaneous fistula around the operation scar for three years. She had hospital stays many times due to gastrointestinal pathologies with a suspect of ileus. However, she was discharged from the hospital, as the passage was opened every time.

The patient was consulted to us during the general surgery clinic stay for a cutaneous fistula on the lateral side of the thigh, near her hip operation scar. There was a gas and liquid outflow from the fistula and the appearance of the liquid was like a Gram-negative bacterial infection. She had pain and an inability to walk, and she had no inflammatory diseases in her history. Her active and passive range of motions (ROMs) were restricted in every direction. She had pain with foot compress. Her left hip was slightly swollen and she had pain with palpation. X-rays and computed tomography (CT) were taken. There were implant loosening and migration towards the pelvis of the acetabular component (Figure 1). C-reactive protein (26 mg/L) and erythrocyte sedimentation rate (ESR) (125 mm/h) were high. Implant removal, debridement, and sampling were planned due to these findings and symptoms. The patient and family were informed about the possibility of general surgery operation for both CAF and excessive bleeding. 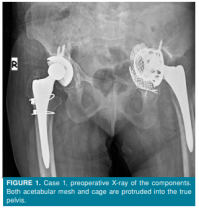 Figure 1. Case 1, preoperative X-ray of the components. Both acetabular mesh and cage are protruded into the true pelvis.
× 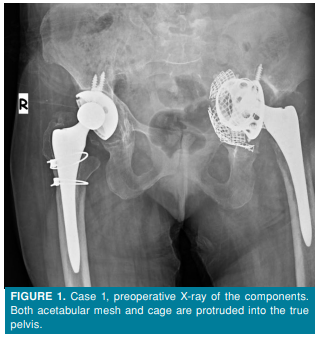 The patient was operated under spinal anesthesia and loose components of revision THA were removed via the same posterior approach. There was too much bleeding on the surrounding tissues of the pelvic mesh and screws. Any fistula could not be detected due to bleeding. Serious inflammation findings were observed in the true pelvis. Debridement was performed, gentamicin-impregnated cement (mixed with 2 g vancomycin) was put into the femur and a drain was placed (Figure 2). 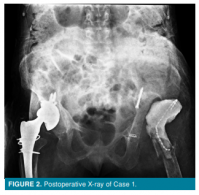 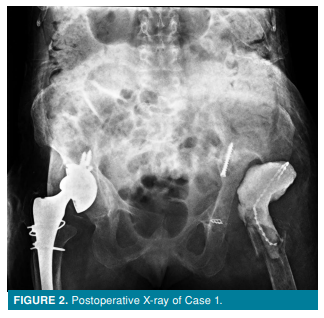 After the operation, a loading dose intravenous (IV) teicoplanin was initiated. The next day after the operation, the color of the drainage of the drain was getting brown and the drain took air. These findings supported us to think about a CAF into the hip joint. A CT was performed for a possible CAF and the patient was operated by the general surgeon. Segment resection and end-to-end anastomosis were performed for the CAF. After that operation, the culture resulted and Escherichia coli (E. coli) was the microorganism and IV ceftriaxone was added to the antibiotic therapy. Right THA revision was planned for the patient to regain the ability to walk.

Case 2- A 72-year-old female patient with BHH operation and pain while walking accepted to the outpatient clinic of our orthopedic and traumatology department. Her hip ROM was painful in every direction. In her history, she was treated for endometrial cancer and received radiotherapy in 2011. She was, then, operated for her femoral neck fracture after falling at the ground level in 2012. She had pain in her left hip and did not relieve, although she used painkillers every day.

The ESR and CRP values were high and 60 mm/h and 16 mg/L, respectively. There were a cemented femoral component loosening and protrusion of the bipolar cup into the pelvis in her X-ray (Figure 4). She was operated under general anesthesia and both bipolar cup and femoral components were removed. Serial debridement was planned due to the intraoperative infected bone and soft tissue condition. A drain was applied and set with negative pressure. There was air in the drain and the color of the fluid content was getting more brown-like feces on the first postoperative day. The CT and dynamic contrastenhanced magnetic resonance imaging (MRI) were performed (Figures 4-6). The suspect of CAF was confirmed by both CT and MRI. The patient was operated again with the help of a general surgeon and debridement was performed and a colostomy was opened after closing the fistula. 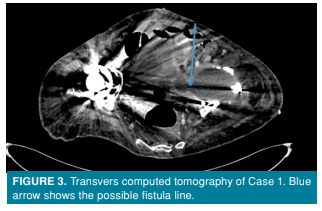 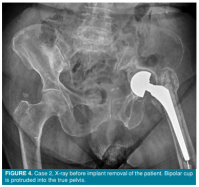 Figure 4. Case 2, X-ray before implant removal of the patient. Bipolar cup is protruded into the true pelvis.
× 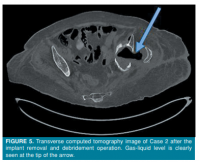 Figure 5. Transverse computed tomography image of Case 2 after the implant removal and debridement operation. Gas-liquid level is clearly seen at the tip of the arrow.
× 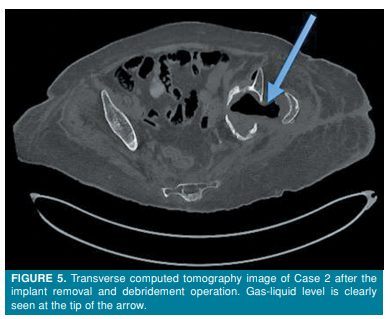 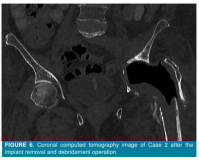 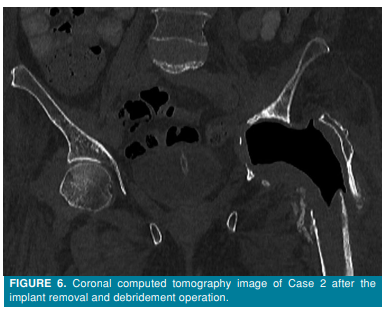 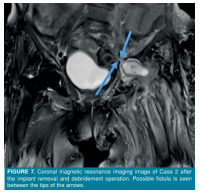 Figure 7. Coronal magnetic resonance imaging image of Case 2 after the implant removal and debridement operation. Possible fistula is seen between the tips of the arrows.
× 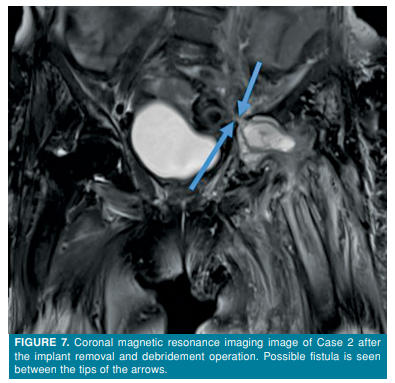 Escherichia coli was the culprit microorganism and the patient received IV ceftriaxone antibiotic therapy. The colostomy of the patient was closed in the follow-up period, but no orthopedics operation was performed for the patient due to the bone quality and additional morbidities which were acquired in the treatment period of CAFs.

Coloarticular fistulas are rarely seen fatal pathologies and may be overlooked due to their low frequency.[7] If CAFs involve the hip joint, malignant gastrointestinal diseases or inflammatory diseases, long-term management with steroids, local wound necrosis and radiation therapy are considered the etiological factor.[3,8] These two cases highlight the importance of recognizing CAFs, if some findings occur during follow-up after hip arthroplasty operations. The first case had a cutaneous fistula with extracting gas. The drain of the second case took the air on the postoperative first day, the MRI and CT images were highly specific and valuable to define the CAF.

Coloarticular fistula formation between the hip joint and colon may result in morbidities and mortality.[6-9] Additional inflammatory diseases, long-term management with steroids, local wound necrosis and radiation therapy may be contributing factors to the CAFs.[8] One of our cases had radiation therapy due to endometrial cancer, but one case did not have any aforementioned diseases. She had multiple revision THA operations and had significant findings of infected THA. One of the patients (Case 1) was predicted to have a CAF, but the second was not. The component protrusion into the true pelvis is the same characteristic of these two cases. The follow-up of drainage, change of color and the swelling of the drain with air alert and confirm us to think about a CAF.

Multislice CT for the preoperative evaluation of a revision THA operation is useful to predict the acetabular bone defects and for the selection of the implants.[10] Both of our cases had preoperative CT, but the fistula formation could not be detected in preoperative evaluation. It was thought that patients have a CAFs with clinical and drainage findings after the first debridement and implant removal operation.

Gas formation under the skin and between muscles is usually seen in complications related to soft tissue infections as a consequence of trauma and operation. The reason may be both Gram-negative bacterial infection and clostridial infection.[11] In our cases, we observed gas in the drain and preoperative CT scans due to intestinal gas content.