Bilateral acetabular fracture as the result of high energy injury has been reported in the literature following road traffic accidents (RTAs) in younger population;[1] hosswever, they remain very rare among trauma patients.[2] Most authors reported some cases secondary to seizure crisis,[3-7] few cases in elderly patients following low-energy trauma with acetabular insufficiency.[8,9] These special types of fractures are complex and the management option are extremely challenging,[10] as they can be associated to hip dislocation and/or other vital organs injury, even death, if excessive blood loss is involved.[1,11]

In this article, we present a case of post-traumatic bilateral traumatic acetabular fracture in a 48-year-old female patient with a high risk of postoperative complications.

A 48-year-old female patient was admitted to our hospital four days after a car accident, the patient’s main complaint was, pain in the abdomen, accompanied by restriction of movement in the lower limb. She was first admitted to the external hospital for emergency management where an emergency laparotomy with exploration, partial resection and anastomosis of the small intestine plus mesenteric repair was done due to traumatic mesenteric laceration. Other procedures included debridement and suture in the left groin for soft tissue injury. The patient was referred to our hospital in the emergency setting for further treatment.

Table 1. Laboratory report (the data range is taken according to the country standard)
× 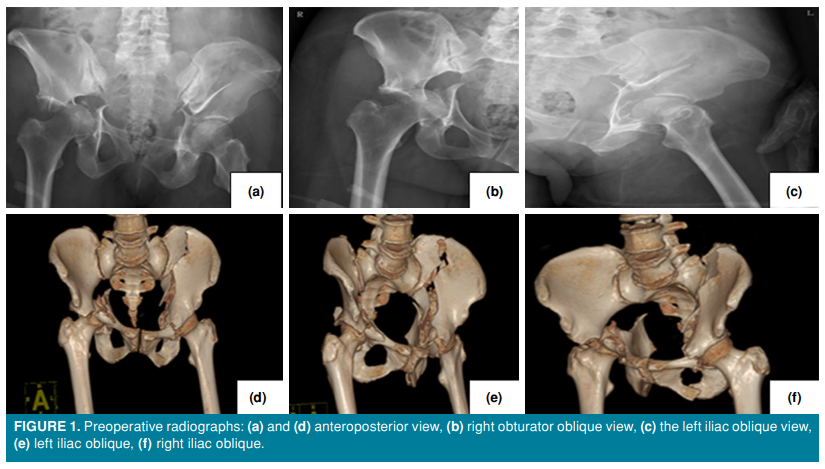 The patient received fondaparinux sodium injection (2.5 mg once a day) from the admission with routine checkup of disseminated intravascular coagulation (DIC) indicators such as D-Dimer (Table I). However, this antithrombus prophylaxis was stopped 24 h before operation to minimize the intraoperative bleeding risk. Additionally, the Tranexamic 1 g (an anti-fibrinolytic agent) was used preoperatively 1 g was infused 15 min prior the incision, was repeated after 3 h of operation and 6 h after the postoperation to reduce the intraoperative and postoperative blood loss without increasing the risk of thromboembolic events.

The patient was treated surgically with open reduction and internal fixation (ORIF) under general anesthesia.

The postoperative radiographs and 3D CT scans were completed and the report showed satisfactory findings (Figure 2). The patient was discharged 18 days after surgery. Physiotherapy was recommended with a follow-up radiography at one month and every three months thereafter. 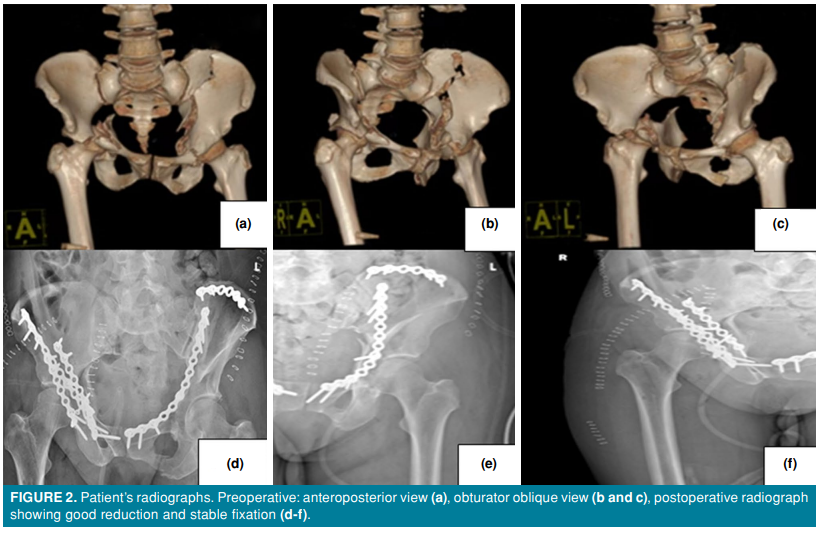 Bilateral acetabular fracture is a very rare presentation among the trauma patients, as the pattern and the degree of the forces required to fracture both acetabula is very unique.[2] Previous articles have reported such cases in seizure patients, pregnant woman with osteoporosis and elderly.[1,3-5,7-9,12-14] One case with some underlying medical history such as renal insufficiency, corticosteroid therapy and radiotherapy history were also found in the literature.[3,8] Although most literatures report bilateral acetabular fracture, in seizure and elderly with osteoporosis, one case was reported in a 15-year-old male adolescent due to immaturity of the bone.[15] In this study, we report a case of bilateral acetabular fracture secondary to high velocity trauma in a 48 years old female patient (without osteoporosis) involved in a road traffic accident.

Most acetabular fracture secondary to high-velocity injury are simultaneously complicated with hip dislocation requiring emergency reduction.[16] In our patient, complications included hip subluxation and sciatic nerve entrapment. The complexity of the bilateral acetabular fracture lies in both their presentation and their management, as the bowel or urogenital systems may be affected, increasing the risk of contamination and infection.[17] Patients usually present with traumatic brain injury, rib fractures, lung contusions, and mesenteric irritation (as in our case) with respiratory distress and infection.[18] Sciatic nerve palsy is very common after acetabular fracture, particularly posterior wall fracture or when the fracture is associated to hip dislocation.[19] In our case, the intraoperative exploration demonstrated the right sciatic nerve entrapment.

Patients with an ISS of ≥16 have an increased risk factor of deep vein thrombosis (DVT), which the risk is increased if lower extremity fracture is involved.[20] Our patient’ ISS was 32 on admission, and an increased D-dimer indicated a risk of DVT (Table I). The patient’s previous laparotomy wound presented some pus discharge (but no fever), suggesting the presence of an ongoing SSI which was confirmed by the persistence of leukocytosis (Table I) and bacterial culturesensitivity. Therefore, the operation was needed to be delayed while attempting to normalize the infection markers such as white blood cell (WBC) count and C-reactive protein (CRP). We preceded with bedside debridement using hydrogen peroxide (H2O2), chlorhexidine and normal saline with additional antibiotherapy. Few days later, there was decrease in CRP level from 105 mg/L on admission to 34 mg/L (normal value CRP <5 mg/L) at one day preoperation, no fever and three consecutive sputum culture were negative: this was an evidence that the SSI and pneumonia was controlled even though the WBC remained high (>9.5x109 /L).

The multidisciplinary consultation with the cardiothoracic and the infectious disease specialists retained the following management protocol for the patient’s comorbidities: piperacillin sodium + tazobactam 4.5 g three times a day to control pneumonia, the lung contusion and pleural effusion was quantified as minor, therefore there was no special recommendation for its management.

However, we had to face a dilemma between the timing for the operation and the necessity to normalize the blood laboratory parameters, as the timing is very important for the acetabular fracture postoperative outcome. This should be ideally within seven days or in less than two weeks, when ORIF is considered.[19]

In a study including patients undergoing total hip arthroplasty (THA), among those who had an extended length of stay (LOS) in the hospital, 64% had a preoperative leukocytosis, among them, 35.7% had complications of urinary tract infections (UTIs), 21% had hospital acquired pneumonia (HAP) and some patients had SSI.[21] Additionally those with a preoperative hemoglobin level of <109 g/L had also an extended LOS of >7 days. The authors concluded that the extended LOS was strongly related to the preoperative abnormal laboratory blood test (e.g., leukocytosis, anemia) and strongly suggested to consider delaying surgery in cases of preoperative leukocytosis. Saul et al.[22] found that CRP was a very good predictor for a postoperative infection; additionally, the elevated CRP peak could also be related to the extent of the surgical trauma, given that the peak of CRP in ORIF was higher than that in minimal invasive. The blood biochemistry analysis of our patient revealed hypoalbuminemia (Table I). Yoshida et al.[23] reported that the preoperatively elevated CRP and hypoalbuminemia were associated to the postoperative SSI, postoperative UTI, and revision surgery. In our patient, the abnormal laboratory blood test and the need to respect the timing for the ORIF constituted an important dilemma, but after discussion with the team, we decided to carry on with the operation on hospitalization Day 7 even considering possible postoperative complications. It is necessary to emphasized that the patient had already spent four days in the external hospital where initial management was initiated: this made a total of 11 days from the injury to the acetabular fracture surgery. During the hospitalization period, one of our management objectives was to reverse the hypoalbuminemia in our patient by administrating the human albumin as supplement and encouraging patient’s self-feeding to prevent nutritional hypoalbuminemia and maintain the patient’s rehydration with fluid therapy.

The management of bilateral acetabular fracture is still controversial; most authors have reported good results with conservative management,[3,5] some have reported management with cementless THA,[6,7,9,12,13] while some regarded ORIF as the goldstandard option with good results.[8,12] Percutaneous fixation is also an option, but it can only be used in cases of non-displaced or fairly displaced fracture.[24] In our case, we considered ORIF and the surgical approaches included the modified Stoppa to access both sides to fix the inner wall of the acetabular fracture, combined with the bilateral iliac fossa approaches, which was mainly to handle the roof of the acetabular and the iliac fracture; and finally, as the right posterior wall was involved, we added the K-L to fix it.

The pararectus and ilioinguinal approaches are recommended in complex acetabular fracture reduction allowing good visualization, good reduction and easy fixation and time saving.[25] However, in our case, both approaches had to be avoided due to the close proximity of the previous laparotomy incision to the pararectus incision, then the ilioinguinal incision with the previous suture line in the inguinal region obtained from the initial open soft tissue injury. The proximity between these could increase the chances of contamination and postoperative SSI as the laparotomy wound was already infected. However, the complexity of the fracture pattern dictated the need of three different anterior surgical incisions.

In terms of operation steps, the principle recommends to first reduce the larger fracture portion before the smaller with the acetabular fracture reduction starting from the periphery to the center of the acetabulum. However, due to the complexity of the fracture pattern, we proceeded from the right acetabulum with the reduction of the hip subluxation outward assisted by the ipsilateral limb traction, followed by the approach to the left acetabulum in which we addressed the reduction from the periphery to the center of the acetabulum. The choice of these steps was dictated by the greater fracture displacement, subluxation of the hip blocking the reduction, therefore, we first addressed the left ilium, then the acetabulum (periphery-central), to correct the left pelvic rotation. The correct anatomical reduction of the both acetabula was assessed and confirmed with the fluoroscopy machine with good satisfaction followed by definitive fixation with plate and screw. The operation time was 186 min with 600 mL intraoperative blood loss and 5 U intraoperative blood transfusion. The patient received fondaparinux sodium injection (2.5 mg once a day) from the admission with routine checkup of disseminated intravascular coagulation (DIC) indicators such as D-Dimer (Table I). However, this antithrombus prophylaxis was stopped 24 h before operation to minimize the intraoperative bleeding risk. Additionally, the Tranexamic 1 g (an anti-fibrinolytic agent) was used preoperatively 1 g was infused 15 min prior the incision, was repeated after 3 h of operation and 6 h after the postoperation to reduce the intraoperative and postoperative blood loss without increasing the risk of thromboembolic events: this approach was consistent with the indication of tranexamic acid available in the literature.[26,27]

The postoperative radiographs and 3D CT reported satisfactory findings. To date, no postoperative complications were reported, although the patient is still under follow-up.

In conclusion, we report an unusual case of bilateral acetabular fracture in an adult patient who presented with related comorbidities and was successfully managed with ORIF. This is one of the rare cases of bilateral acetabular fracture due to highvelocity trauma injury reported in the literature. However, with the increasing incidence of RTAs, such cases would probably be recurrent in the upcoming years.

* The first two authors contributed equally to this manuscript.