Pacinian disorders are exceedingly rare, and the exact pathogenesis is still unknown. The most common symptoms are pain, sensory changes, and a visible or palpable mass, and diagnosis is usually made by pathological examination after the excision of the painful nodule. In this case report, we present the case of a 49-year-old male with Pacinian corpuscle hyperplasia located on the metacarpophalangeal joint, emerging at the same hand of the patient two years after the treatment due to complex regional pain syndrome (CRPS). To the best of our knowledge, this is the first case report revealing the association of CRPS with hyperplasia of Pacinian corpuscles.

Pacinian corpuscles’ (PCs) histological structures were first described by Paccini[1] in 1835. They are classically described as rapidly adapting mechanoreceptors, responding to the onset or cessation of mechanical stimuli.[2] Histologically, PCs are multilamellar structures with a characteristic onion-like appearance. Pathological hyperplasia of PCs is immensely rare. Pacinian corpuscle hyperplasia was first published as a Pacinian neurofibroma in 1952.[3] It is a painful disorder that mostly involves the hand. The pathogenesis of PC hyperplasia is still unclear and has not yet been defined. However, trauma may play an important role in the etiology of PC hyperplasia since a history of local trauma has been reported in 57% of the cases[4]

In this case report, we present an interesting case with PC hyperplasia located on the metacarpophalangeal (MP) joint, emerging at the same hand of the patient two years after the treatment of complex regional pain syndrome (CRPS). To the best of our knowledge, this is the first case report revealing the association of CRPS with PC hyperplasia[5]

A 49-year-old male patient was admitted to our clinic complaining of diffuse pain, paleness, dryness, and sensitivity to heat at the palmar surface of the left hand. During the physical examination, discoloration of the skin was noticed, and the skin temperature was increased compared to the unaffected side. Numbness was not observed, and the pain was aggravated by exercise. With the preliminary diagnosis of CRPS, three-phase bone scintigraphy was ordered. The three-phase bone scintigraphy revealed hyperemia at the distal second metacarpal bone, and radionuclide uptake was increased at the second metacarpal bone and the wrist. These findings supported the diagnosis of CRPS. Consequently, a total of 14 sessions of stellate ganglion block and pulsed radiofrequency therapy was performed. The patient’s complaints were completely relieved after treatment, and no complaints were recorded during two years of follow-up after conservative treatment.

Two years after the treatment for CRPS, the patient was readmitted to our clinic with complaints of severe pain in the left second finger that had started one day ago. On physical exam, the pain was located around the volar aspect of the second MP joint and was aggravated by palpation of this area. In addition, the pain was not altered by passive and active movements of the interphalangeal joints. A nodular lesion was palpated at the volar surface of the second MP joint, and no color change was noticed at the overlying skin. Numbness was found on the ulnar aspect of the second finger. The patient had a history of repetitive punching; however, radiography of the left second finger was within normal limits. An excisional biopsy was planned for the painful nodule. Under local anesthesia, a Brunner incision was made over the volar surface of the left second MP joint. The common digital nerve was protected with careful dissection. White nodular grape-like clusters were observed adjacent to the common digital nerve, and the excision of these nodules was performed without damaging the common digital nerve (Figure 1). After the excision of the nodules, the skin was closed in simple interrupted fashion. Histopathological examination of the excised tissue revealed an increased number of PCs with degenerative changes, which were suggestive of PC hyperplasia (Figure 2). One week after the operation, the patient reported a gradual improvement in the pain. At the one-month follow-up, the patient's pain was completely resolved. A written informed consent was obtained from the patient. 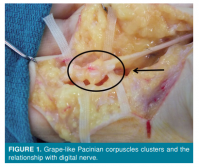 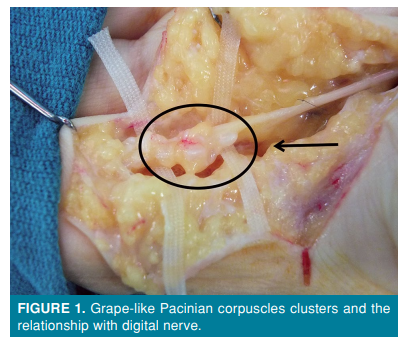 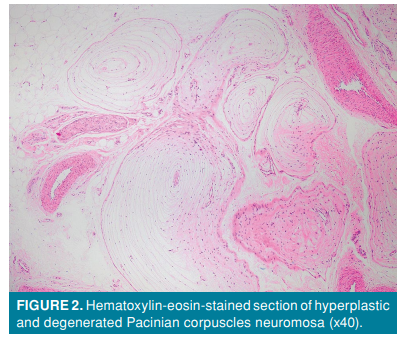 The PC functions as a rapidly adapting mechanoreceptor responding to the onset or cessation of mechanical stimuli and rapidly adapting pressure receptors.[2] Pacinian corpuscles are the largest encapsulated sensory receptors with diameters of 1 to 2 mm, and they are visible by the naked eye.[2,6] The histological structure consists of a nonmyelinated terminal part of the nerve fiber surrounded by a multilamellar inner capsule, and the outer capsule is continuous to the perineurium of the nerve (Figure 3).[7]

Figure 3. Structure of the Pacinian corpuscles.
× 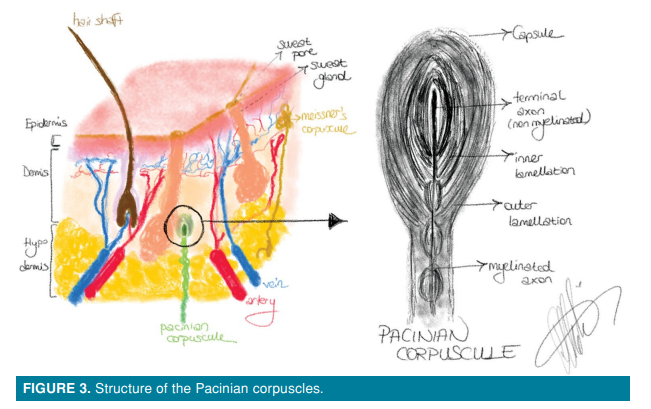 Pacinian corpuscles are distributed in the dermis, mostly in the fingers, palm, conjunctiva, mesenteries, branching blood vessels, penis, urethra, clitoris, parietal peritoneum, and loose connective tissue.[8] A cadaveric study demonstrated that there were approximately 300 Pacinian corpuscles in the human hand.[9] Among these, 44-60% were located at the fingers near MP level (23-48%) and thenar and hypothenar regions (8-18%).

In the literature, pathological PC disorders are described as hyperplasia of the PC and Pacinian neuroma or neurofibroma. Although these terms are used as if they were interchangeable, they are different entities. Rhode and Jennings.[10] categorized PC disorders into four groups: type A, a single, enlarged, subepineural corpuscle; type B, a grape-like cluster of PCs attached to the nerve by a fine filament; type C, a series of enlarged corpuscles located in tandem, appearing as a branch of the nerve; type D, many hyperplastic corpuscles located along the digital nerve as a single entity or in pairs. The most common type is type B (49%), followed by type A (23%), type D (15%), and type C (13%).[4] According to this classification, our case is categorized as type B.

The most common symptoms of PC hyperplasia are pain (85%), sensory changes (58%), a visible or palpable mass (48%),[4] and all these symptoms were also observed in our patient.

Pain is transmitted by C and A-delta fibers; therefore, PCs are not expected to perceive pain sensation since the PC receives A-beta fibers. An immunohistochemical study demonstrated calcitonin gene-related peptide (CGRP) in PCs.[14] Peripheral CGRP release supports nociceptor sensation associated with hyperalgesia, while not eliciting nociceptive signals alone.[15] Another opinion about the mechanism of pain in PC hyperplasia is direct compression of mass to digital nerves due to increased volume of corpuscles.[16] The aggravation of pain by pressure supports this theory.

The exact pathogenesis of the Pacinian disorders is still unknown. In current literature, a history of local trauma or repetitive microtrauma was found in %57 of the patients, which suggests that local trauma may be an important predisposing factor for PC hyperplasia.[4,17] Additionally, PCs have a close topographic relationship with the glomerular arteriovenous anastomosis and can be affected by glomerular arteriovenous anastomosis blood flow.[18] The receptor part of the corpuscle of the inner bulb is surrounded by a series of nonelastic lamellae, which contain fluid in their spaces, and this fluid cannot escape from the corpuscle.[18] Venous vessels of PCs arise from the interlamellar spaces and join the outlets of the anastomoses, and when the anastomosis opens, the arterial blood fills its outlets, causing the pressure to stop or even reverse the blood flow in the Pacinian veins.[18] As a result, increased pressure is transmitted by receptors located at the inner core, and it might be a mechanism for signaling changes in local blood supply.[18] Any biologic events that perturb the relationship of the corpuscle and the arteriovenous anastomosis could result in the formation of new corpuscles[2]

Complex regional pain syndrome is characterized by vascular disturbances primarily affecting the microcirculation in the distal part of the involved extremity.[19] In the acute stage, inhibition of sympathetic vasoconstriction and exaggeration of neurogenic inflammation seems to be the major pathophysiological mechanisms inducing vasodilation.[19] During the chronic course of the disease, vasoconstriction may dominate the clinical picture[19] Increased local blood flow in CRPS may stimulate the formation of new PCs by perturbing the relationship between the corpuscle and the arteriovenous anastomosis. To the best of our knowledge, this is the first report revealing the association of CRPS with PC hyperplasia. Complex regional pain syndrome may play a role in the pathogenesis of Pacinian hyperplasia.

In conclusion, CRPS may play a role in the pathogenesis of PC hyperplasia due to increased local blood flow in the arteriovenous anastomosis adjacent to the PC, thereby stimulating the growth of corpuscles. Pacinian corpuscle hyperplasia should be considered in the differential diagnosis of the patients presenting with a well-localized pain in their hands.