The association of accessory anterolateral talar facet (AALTF) and tarsal coalition has been reported recently. However, there is no report in the literature examining the clinical outcomes of operative treatment simultaneously addressing both AALTF and tarsal coalition. In this case series, we report the functional outcomes of operative treatment for both AALTF and calcaneonavicular coalition (CNC). Four male patients were admitted to our institution with foot pain. Radiographic examination revealed CNC and accompanying AALTF in all patients. Five feet of these four patients were operated simultaneously for AALTF and CNC. At the final follow-up, the mean Visual Analog Scale score was 1.7±2.4 (range, 0 to 5.5), the mean American Orthopedic Foot and Ankle Society score was 89.6±11.5 (range, 69 to 97), and the mean Foot Function Index was 15.4±19.1 (range, 0 to 43). In conclusion, simultaneous resection of CNC with AALTF seems to have good postoperative clinical outcomes. As AALTF can emerge along with CNC, every patient scheduled for CNC resection should be evaluated for AALTF.

Accessory anterolateral talar facet (AALTF) was first described by Sewell[1] in 1904 with a frequency of 10.2% in 1,006 Egyptian tali as an anatomic variant of the posterior facet of talus. In a cadaver study done by Sarrafian,[2] its incidence was reported as 38%. A radiological study indicated that its incidence was higher (32.7%) in symptomatic patients compared to asymptomatic patients (26%).[3]

The AALTF has been thought to cause pain secondary to talocalcaneal impingement in the rigid flat foot.[4] Tarsal coalitions are the most frequent etiology of rigid flat foot in pediatric population.[5] The AALTF can occur with or without a tarsal coalition and can be an isolated finding in rigid flatfoot. Recently, the association of the AALTF with tarsal coalition has been reported in the literature.[6,7] Although they are thought to be associated, there is no report in the literature examining the outcomes of combined surgeries for both etiologies.[8] In this case series, we report the clinical outcomes of patients who had simultaneous resection of the AALTF in addition to calcaneonavicular coalition (CNC) and highlight the importance of the AALTF in the treatment of CNCs.

Four male patients with a mean age of 12.8±1.9 (range, 11 to 16) years were admitted to our institution between January 2015 and June 2019 complaining of foot pain. On physical examination, all the patients had restricted subtalar joint motion. Preoperative radiographs and computed tomography (CT) scans revealed CNC and the AALTF in all patients (Figure 1). None of the patients had arthritic changes in the preoperative radiographic evaluation. Initially, the patients were treated with conservative treatment; however, they still had foot paint despite six months of conservative treatment. Surgical resection for CNC and AALTF was planned for five feet of four patients. A written informed consent was obtained from parents and/or legal guardians of each patient. The patients were operated with a simultaneous combined surgery for both AALTF and tarsal coalition.

Figure 1. (a) A computed tomography scan and (b) three-dimensional reconstruction of an 11-year-old male patient demonstrating calcaneonavicular coalition and accessory anterolateral talar facet.
×

An oblique incision was performed over the anterolateral aspect of the foot centered over sinus tarsi. The extensor digitorum brevis muscle was identified and detached from its origin. The CNC was exposed with a periosteal elevator and verified under fluoroscopy. A rectangular shaped bone block was removed with an osteotome and mallet. The AALTF was, then, identified from the same exposure with sharp dissection in the sinus tarsi in the most lateral part of posterior facet of talus. The talocalcaneal impingement due to AALTF was confirmed during subtalar eversion. The excision of the AALTF was done with an osteotome and mallet to a point where there was no impingement with subtalar eversion. Extensor digitorum brevis muscle was interposed between the calcaneus and navicular as described in the literature (Figure 2).[9] 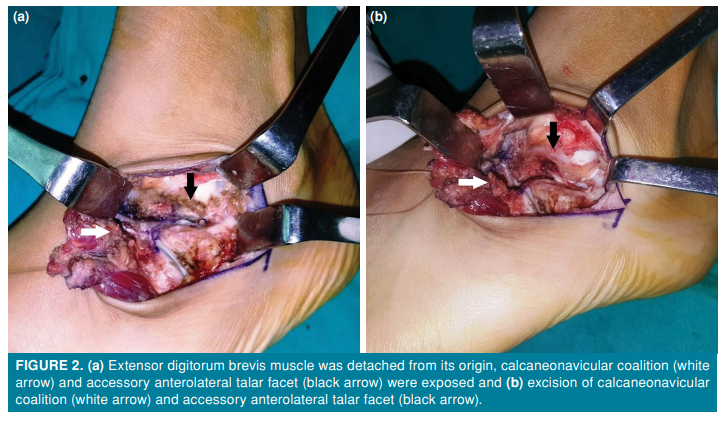 The patients were immobilized for two weeks with a below knee cast. Weight bearing as tolerated and range of motion exercises for ankle and subtalar joint were started immediately after cast removal. At a mean 17.8±6.6 (range, 12 to 25) months of follow-up, the mean Visual Analog Scale (VAS) score was 1.7±2.4 (range, 0 to 5.5), the mean American Orthopedic Foot and Ankle Society (AOFAS) score was 89.6±11.5 (range, 69 to 97), and the mean Foot Function Index was 15.4±19.1 (range, 0 to 43). None of the patients required any secondary surgical intervention and no complication occurred throughout their postoperative course.

Tarsal coalition and the AALTF are two etiological factors which are responsible for rigid pes planus deformity and midfoot pain.[4,10] Although tarsal coalition has been known for a long time and much has been described in the literature, the AALTF as an etiological factor in subtalar pain has recently gained popularity. Our case series was the first report in the literature investigating the results of surgical treatment when both etiologies were addressed simultaneously and showed good functional outcomes.

Tarsal coalition has been described as a congenital or acquired condition.[11] Congenital tarsal coalition is thought to be caused by a genetic condition resulting in a differentiation or segmentation anomaly during embryological development.[12] On the other hand, the etiology of the AALTF has not been determined clearly in the literature. The AALTF was described as an anatomical variant of the posterior talar facet;[1] however, Martus et al.[13] suggested that it might be a developmental entity. In addition, the association between tarsal coalition and AALTF has also been reported in the literature.[6] The theory behind this association remains unclear. Jayakumar and Cowell[14] reported that patients with tarsal coalition might develop secondary degenerative changes at the lateral aspect of the hindfoot, including broadening of the lateral process of the talus. Furthermore, several secondary findings of tarsal coalition have been described such as a talar beaking.[15] A talar beak occurs due to impaired subtalar motion, leading to periosteal elevation at the insertion of the talonavicular ligament. A cycle of osseous repair results in formation of the talar beak.[16] Nonetheless, Alqahtani et al.[6] reported that the association of tarsal coalition and the AALTF could be related to a variation in the developmental segmentation of the tarsal bones. Considering the younger mean age of our patients, CNC may be associated with AALTF by means of developmental theory, instead of adaptive theory.

Resection and arthrodesis are the options in the surgical treatment of tarsal coalition. Resection of the coalition is the mainstay of the treatment in adolescents and arthrodesis is usually performed who have severe degenerative changes and whose resections are failed.[26,27] In addition, Cass and Camansta[28] reported that resection of CNC had better outcomes than talocalcaneal coalition, and resection yielded better long-term results in young patients. Given the supportive evidence in the literature for resection of CNC in addition to the absence of arthritic changes in our patients, we preferred resection. Our favorable results following resection are consistent with the previous literature.

Nonetheless, this case series has some limitations. Since CNC is a rare disorder, our sample size is small. Preoperative VAS, AOFAS, and Foot Function Index of the patients were missing. Further studies with a control group and a longer follow-up period may be beneficial to assess the necessity of the combined surgery for the CNC and the AALTF.

In conclusion, simultaneous surgery for both AALTF and CNC showed good clinical outcomes. Based on these findings, we recommend careful identification of an AALTF associated with any CNC with CT scan in symptomatic rigid flat foot patients and resect both disorders simultaneously, as simultaneous resection of the CNC with the AALTF may improve the postoperative outcome.