Objectives: This study aims to assess, through a questionnaire, the functionality, and efficacy of using three-dimensional (3D) printed medical casts.

Patients and methods: Between February 2017 and March 2019, a total of 24 patients (14 males, 10 females; mean age: 33.1±9.4 years, range, 12 to 62 years) with upper extremity fracture who were applied 3D printed medical cast were included. Patient satisfaction was evaluated using the Quebec User Evaluation of Satisfaction with Assistive Technology 2.0 (QUEST 2.0). Each item is scored on a five-point scale.

Results: The mean follow-up was 14 (range, 6 to 18) months. All fractures healed within four to six weeks without any complications. In all cases, there was no loss of reduction. The total mean QUEST 2.0 satisfaction score for the participants was 4.7. The ratings on each scale ranged from 4.5 to 4.9.

Immobilization in fracture treatment is a method that has not changed for thousands of years and is still practiced.[1] However, the immobilization materials and methods have undergone some changes over the years.[2] Currently, plaster or fiberglass cast is used for the treatment of most fracture patients.[3] Although plaster or fiberglass casts are widely used in the practice of orthopedics, it has certain drawbacks such as decreased patient satisfaction, dermatological complications, difficulty in monitoring the status of soft tissue such as compartment syndrome or open wounds, and restrictions on certain daily activities such as swimming or bathing without protection bandages.[4,5]

The advancement of technology and the usage of three-dimensional (3D) printers in medicine have resulted in numerous of innovations.[6] The 3D printed cast is the best example of this. The plaster produced is light and specifically shaped for the patient’s extremity, has a ventilation feature, and is not affected by contact with water which has increased the interest in the 3D-printed medical cast.[7]

After the closed reduction of the fracture, the patient was placed plaster of paris or fiberglass cast. Scanning was performed three to five days after the injury, when post-traumatic edema subsided. 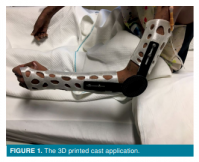 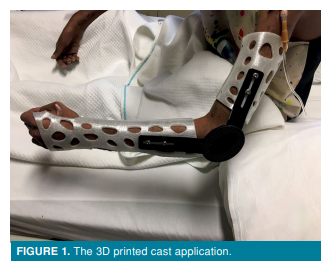 We evaluated patients according to fracture location, time of union, and complications. After fracture healing and cast removal, patient satisfaction was assessed using the Quebec User Satisfaction Assessment with Assistive Technology 2.0 (QUEST 2.0).[8] The patients included in the study were interviewed face-to-face using a questionnaire. The answers are all scored on a scale of 1 to 5. We detailed the questionnaire as subgroups considering personal complaints (itching and increase in the amount of hair under cast) and facilities (remove or re-wear).

A written informed consent was obtained from each patient. The study protocol was approved by the Haseki Training and Research Hospital Ethics Committee (IRB No: 2020-218). The study was conducted in accordance with the principles of the Declaration of Helsinki.

This procedure was divided into three stages. The initial stage involves 3D scanning of the patient's limbs. The second stage was transferring data from the scanner to computer-aided design (CAD) software. The final stage was transforming the digital version to a physical device utilizing 3D printing.

The physician marked the proximal and distal ends of the cast (Figure 1). The limb must be immobilized for accurate measurement by the 3D scanner. The physician must use a tripod-mounted equipment to get the limb to the precise position of the reduction angle. The stabilized limb was scanned, and the scanned volume was saved as a point cloud (Figure 2).

Figure 2. Scanning the stabilized limb and saving the scanned volume as a point cloud.
× 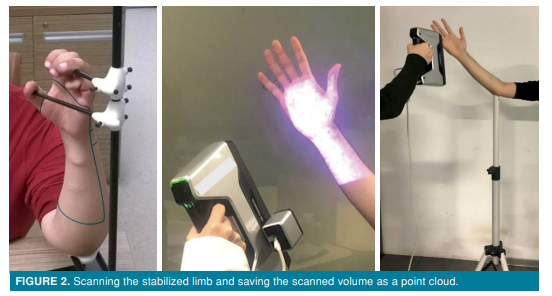 We utilized an EinScan Pro (Shining 3D, Hangzhou, China) scanning instrument due of its increased sensitivity and ease of use. This device is equipped with a gyroscope and two cameras. The projector sends a structured light beam at a specific frequency onto the object to be scanned, which is positioned between two cameras that are substantially angled (Figure 3). The EinScan Pro scanning device can detect pattern flaws in the light beam it sends, allowing it to learnt the object̓s depth and features. It creates the object's 3D point cloud.

Figure 3. Sending a light beam to the object to be scanned with the help of a projector and two cameras.
× 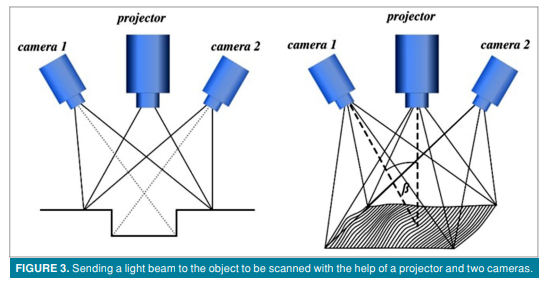 The point cloud was transferred into CAD software as a triangular mesh structure. We utilized Rhinoceros 3D for CAD. The distal-proximal axis of the scanned limb was brought to the Z-axis to adjust the mesh coordinate center. The proximal and distal reference curves were drawn (Figure 4). The drawn curves were transformed into the plane, and the areas outside of these boundaries were eliminated so that the basic view of the cast was visualized (Figure 5). While designing the brace, there should be a 1 to 2 mm air gap between the cast and the extremity to eliminate the difficulties in achieving the homogeneous padding index for plaster or fiberglass casts.

Figure 4. The proximal and distal reference curves were drawn.
×

Figure 5. Visualization of the basic view of the casting.
×

The air gaps were designed using Grasshopper 3D, which was a common visual programming language among the add-on of the Rhinoceros 3D program and parametric modeling tools. The air gaps were based on the Voronoi diagram and the optimal values of the relevant parameters selected considering the mechanical strength of the casts. These parameters were the thickness of the cast, the distance between Voronoi spaces, and the distance of the gaps to the clamping mechanism and distal-proximal border. As a result of these determined values, the specialized Voronoi algorithm emerged. Since they had similar standards, all of the splints produced by the Osteoid Medical Company have the same strength.

Polyethylene terephthalate glycol (PETG) is a thermoplastic polymer created through the copolymerization of polyethylene terephthalate (PET) and ethylene glycol, which is biocompatible and non-immunogenic.[9,10] It is transparent with a high gloss surface and easy-to-use nature in a range of applications. It is high impact resistant and is relatively ductile. The PETG has excellent chemical resistance and is easily thermoformable, and also capable of reducing sound transmissions, while being sterile and recyclable.

The mean follow-up 14 (range, 6 to 18) months. Union was achieved in all fractures within four to six weeks without any complication of the union. We performed the QUEST 2.0, once union was achieved.

Table 1. Demographic and fracture location data of the patients
×

Table 3. Mean scores according to the QUEST 2.0 questionnaire
×

Plaster of Paris bandage and fiberglass casts are currently used in the construction of orthopedic splinting and cast.[11,12] Low cost, easy application, and ability to adapt closely are the advantageous features of these plaster and casts.[13] However, they have also some disadvantages such as low durability, difficulty to achieve homogeneous padding index, heavyweight, difficulty in cleaning, not being resistant to water, and causing allergic contact dermatitis, itching, and increase in the amount of hair under cast.[13-16] These disadvantages were not observed in the 3D printed medical casts. The advantages of 3D printed medical casts are light weight, durability, resistance to water, cleanability, breathable nature, ease easy to wear and removal, aesthetic presentation, and precise fit.

For the plaster to work properly, it must be molded according to the patient’s extremity. Considering the errors observed during this procedure, the plaster applies excessive pressure to the extremity at some points, which may cause a circulatory disturbance, pressure sore, or even compartment syndrome.[5,17] No vascular or cutaneous complications were observed in any of the patients who were applied the 3D-printed medical cast. We believe that the 3D-printed medical cast provides matched surface geometry between the casting and the arm, thus distributing the pressure and the ventilated structure in the new instrument provides the benefits of improved patient comfort and reduced risk of cutaneous complications.[18]

The cost of 3D Printed Special Support System is considerably higher than a standard plaster produced by traditional methods.[13] When we evaluated the cost in our study, we found that classical plasters were significantly cheaper than the 3D-printed casts. This prevents the application of 3D printing support in daily practice. However, we believe that 3D-printed support can be implemented at lower costs in the near future with the development of technology and its increased usability.

Our study has the following limitations: the heterogeneous structure of the patients in our study group, the insufficient sample size, and the absence of the control group. Instead of the presence of a control group, a 3D printed medical cast was compared with general plasters or fiberglass casts based on complications. It may be thought that there was a risk of fracture reduction loss throughout the scanning period, but we have chosen patients with stable fractures, which had no risk of reduction loss. This may be considered a limitation of 3D plastering technique rather than this study. Considering that the primary purpose of our study was to assess the effectiveness of using 3D-printed medical cast in fracture treatment, we believed that a heterogeneous series would be sufficient. However, if the efficacy of 3D printed casts on fracture union is to be evaluated, a more homogenous and comprehensive series with control groups is required.