Objectives: In this study, we aimed to examine the effect of tranexamic acid (TXA) on hidden blood loss in total hip arthroplasty (THA) patients.

Patients and methods: Between June 2015 and June 2021, a total of 120 patients (45 males, 75 females; mean age 57.2±4.9 years; range, 45 to 67 years) with primary osteoarthritis who underwent THA without the use of TXA and 53 patients who received TXA were retrospectively analyzed. Demographic data, amount of transfusion, early complications, preoperative and postoperative hemoglobin and hematocrit values, total blood loss, visible blood loss, and hidden blood loss values were compared.

Conclusion: The use of TXA in patients undergoing THA reduces blood loss, including hidden blood loss, thereby reducing the need for blood transfusion after hip arthroplasty. However, there seems to be no linear relationship between postoperative blood loss and hidden blood loss. Considering these results, the routine use of TXA can be recommended in THA, unless there is a contraindication.

Total hip arthroplasty (THA) is currently the most widely used treatment method for the surgical treatment of end-state hip osteoarthritis.[1] Unlike total knee arthroplasty (TKA) operations, bleeding remains a problem in THA operations, as a tourniquet is not used during the operation and the hip region has a relatively high blood supply.[2] Blood loss in patients after THA can lead to postoperative anemia, the need for transfusion, prolonged length of hospital stays, and related complications.[3]

Tranexamic acid (TXA), which is a synthetic lysine amino acid derivation and is one of the most used agents to combat bleeding, reduces fibrinolytic activity by reducing the blood plasmin level.[4] Hidden blood loss (HBL), which usually occurs in major surgical operations, refers to the blood loss found by subtracting the visible blood loss (VBL) from the total blood loss (TBL).[5]

The effect of TXA is revealed during extracorporeal hemorrhage, as it reduces fibrinolytic activity, thereby reducing VBL.[6] Several studies have demonstrated that TXA has another mechanism of action on reducing bleeding,[4] Therefore, it may reduce HBL through its anti-inflammatory effect.

However, the mechanism by which HBL occurs has not been fully explained, yet.[7] Although it has been shown that TXA reduces blood loss in orthopedic surgery and is safe in terms of coagulation-related complications, it has not yet come into routine use in arthroplasty operations.[8] Therefore, the effect of TXA on blood loss, transfusion rates and clinical outcomes is the increasingly popular topic of recent literature of the major joint arthroplasties.

Previous studies have shown that TXA reduces HBL in TKA patients,[5] although there are very few publications showing the effect of TXA on HBL in THA patients, and since the results are controversial, these studies have concluded that further research is needed on this subject.[9] In the present study, we, therefore, aimed to investigate the effect of TXA on HBL in patients undergoing THA, through the comparison of the data of THA patients with and without the use of TXA during the operation.

This multicenter, retrospective study was conducted at Ünye State Hospital, Ankara Numune Training and Research Hospital, Aksaray University Faculty of Medicine Training and Research Hospital, Department of Orthopedics and Traumatology between June 2015 and June 2021. Initial screening was made of a total of 181 patients who underwent THA for primary hip osteoarthritis who were operated by two orthopedic surgeons with similar experience, using the same surgical procedures via a posterolateral approach. After implementation of exclusion criteria, 61 patients were excluded due to a history of deep vein thrombosis or pulmonary embolism, bleeding diathesis, history of renal failure, cardiovascular disease, history of allergy to TXA, history of malignancy, hemorrhagic diathesis and coagulopathy, undergoing anticoagulation therapy, preoperative hemoglobin (Hgb) <10 g/dL, traumatic osteoarthritis or inflammatory arthritis, peripheral vascular disease, hepatic insufficiency, or history of stroke. Finally, a total of 120 patients (45 males, 75 females; mean age 57.2±4.9 years; range, 45 to 67 years) were included in the study. Of these patients, 53 were on routine use of TXA during the operation and 67 without the operative use of TXA (Figure 1). A written informed consent was obtained from each patient. The study protocol was approved by the Nevşehir Hacı Bektaş Veli University Ethics Committee (date/no: 14.07.2021/271). The study was conducted in accordance with the principles of the Declaration of Helsinki. 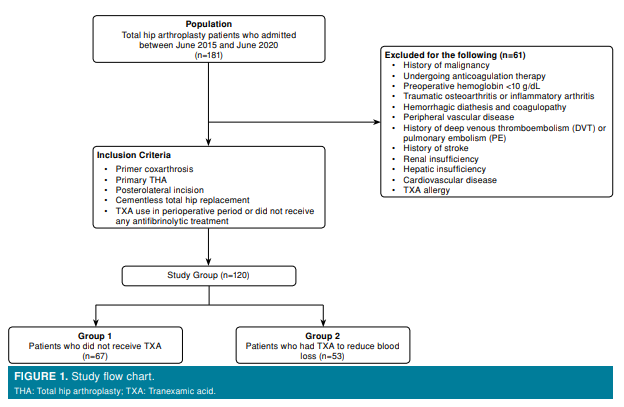 Prophylactic antibiotics of first-generation cephalosporin were administered to all patients as 1 g immediately before the operation and 1 g every 8 h for 24 h. The operations were performed under spinal/epidural and general anesthesia. A combination of cementless femoral stem and screwed acetabular cup and polyethylene insert was used in all patients. For the patients who received TXA, 10 mg/kg intravenous TXA was administered intraoperatively, and the same dose was repeated at the third postoperative hour. At the end of the operation, an intra-articular 10-gauge drain was placed and, then, the layers of the incision were closed in anatomical order. The drain was removed after 24 h postoperatively. The amount of blood accumulated in the drain reservoir was measured and recorded. Intraoperative blood loss was calculated by the anesthetist and nurse as the amount of blood in the suction reservoir and the blood remaining in drapes and sponges. For thrombosis prophylaxis, 4,000 IU low-molecularweight heparin (Oksapar; Kocak Farma, Istanbul, Turkey) was administered subcutaneously to all patients daily for four weeks. On the first postoperative day, the patients were mobilized with weight-bearing as tolerated.

A record was made for each patient of age, surgical site, early complications, body mass index (BMI, (kg/m2 ), the amount of transfusion, Hgb, and hematocrit (Hct) values preoperatively and on postoperative Days 1, 2, and 3, intraoperative blood loss, and the amount of blood from the postoperative drain. Total blood volume (TBV) was calculated as described by Nadler et al.,[10] using the TBL Gross[11] formula as follows:

Erythrocyte suspension of 200 mL was administered to each patient who needed in the postoperative period, and this was added to the amount of TBL. The HBL volume was calculated by subtracting the VBL volume from the TBL volume (Figure 2). No iron or erythropoietin was given before or after surgery. Cell savers and bipolar sealers were not used in any patient. In cases with a Hgb value of <8.5 g/dL during follow-up or in cases showing clinical symptoms of tachycardia, hypotension or anemia, blood transfusion was performed in consultation with the anesthesia team. 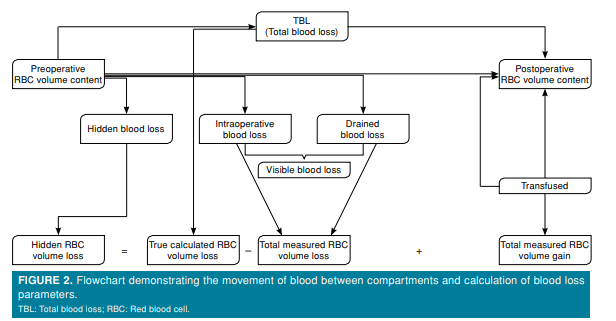 Statistical analysis was performed using the IBM SPSS for Windows version 23.0 software (IBM Corp., Armonk, NY, USA). Descriptive data for numerical variables were expressed in mean ± standard deviation (SD), median (min-max) or number and frequency, where applicable. Parametric test procedures were used in the Kolmogorov-Smirnov test for normal distribution. Independent two-sample t-tests were used to determine the relationships between parameters. The chi-square analysis was applied to determine the relationships between categorical data. Correlation analysis between the volume of HBL and postoperative drainage volume and intraoperative bleeding was evaluated with the Pearson correlation coefficient. A p value of <0.05 was considered statistically significant with 95% confidence interval (CI).

The data of the patients included in the study are given in Table I. There was no statistically significant difference between the patients who received and did not receive TXA in terms of age, operation side, BMI, TBV, preoperative Hgb values, and the type of anesthesia administered. No significant difference was observed between the Hgb values of the groups on the first postoperative day, and on postoperative Days 2 and 3, and the mean Hgb values were significantly higher in the TXA group (Table II).

Table 2. Comparison of groups according to hemogram values
×

Table 3. Comparison of groups in terms of bleeding related parameters
×

Table 4. Comparison of groups according to transfusion amount
× 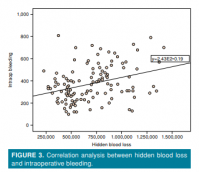 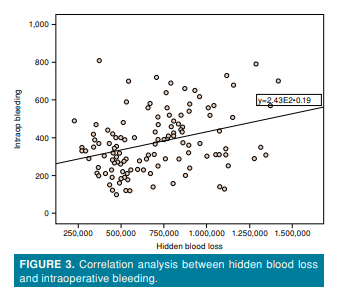 The most important finding of this study was that HBL was significantly reduced in patients with the use of TXA, although no definitive correlation was found between postoperative blood loss and HBL. The VBL is the sum of intraoperative bleeding and the amount of blood to the postoperative drain, while HBL is the amount of residual blood remaining in the joint and the amount of blood leaking into the tissues.[5] The mechanism by which HBL occurs remains a matter of debate, although it has been suggested that fatty acids and free oxygen radicals released from the bone marrow into the circulation are responsible.[7]

In recent years, TXA has become more commonly used in major joint arthroplasty operations and different application methods have been the subject of many studies.[1-3,12] However, there is a limited number of publications examining the effect of TXA on HBL in patients undergoing THA.[2,9,13] In a study, which was the only study in the literature, in which HBL was evaluated in patient groups with and without the use of TXA, TXA had no effect on HBL.[13] However, in the aforementioned study, a single dose of TXA was used at the beginning of the operation and postoperative Hgb measurement was taken as reference in the measurement method made on postoperative Day 5. In another study, in which TXA was administered in increasing amounts, HBL was seen to decrease as the TXA dose increased.[9] In a study investigating the effect of oral and intravenous TXA on HBL, intravenous TXA reduced HBL.[2] In the current study, 10 mg/kg intravenous TXA was administered intraoperatively to all the patients in the TXA group and the same dose was repeated at the third postoperative hour. Both HBL and TBL were observed to decrease significantly in the patients who received TXA, which is consistent with the literature data.

Another important finding of this study was the significantly lower amount of blood transfusion in patients receiving TXA. The expected TBL in patients undergoing total joint arthroplasty varies between 590 and 1,800 mL.[6] The cardiovascular systems of elderly patients applied with THA who have various comorbidities may not tolerate this amount of blood loss and complications may develop.[17] Although blood loss due to surgery can be replaced with allogeneic blood transfusions, blood transfusions have risks such as prolonged hospitalization, immunological reaction, infectious disease transmission, increased mortality, and hemolytic and anaphylactic reactions.[18] Therefore, TXA is frequently used to reduce the need for transfusion and the amount of bleeding in major orthopedic surgical procedures.[8]

In the current study, the relationship was evaluated between intraoperative blood loss and HBL, and a positive correlation was found. In a similar study investigating the effect of TXA on HBL in patients undergoing TKA, a positive correlation was reported between HBL and postoperative drainage volume.[5] However, in the current study, no significant correlation with postoperative drainage volume was observed. The reason for this may be that, unlike in TKA operations, tourniquets are not used during THA. In a study investigating the factors affecting HBL in THA, the effect of intraoperative blood loss on HBL was not examined, but a positive correlation was found between wound length and HBL.[15] This finding supports the current study results. Therefore, intraoperative bleeding can be considered a predictor of early HBL and should not be ignored in the management of blood replacement in the early postoperative period of THA patients.

The main limitation of this study is its retrospective design. In addition, the patients in the present study had primary hip osteoarthritis, and cases of hip osteoarthritis secondary to other disorders such as rheumatological disorders were not evaluated. Different application methods and doses of TXA were not evaluated. However, the homogeneity of the demographic data of the groups compared and the use of similar surgical techniques by the surgeons can be considered the strengths of the study.

In conclusion, TXA application not only reduces TBL and HBL, but also reduces the need for blood transfusion in patients treated with THA. Based on these results, the routine use of TXA can be recommended, unless there is a contraindication in patients who are scheduled for major orthopedic surgical procedures such as THA.