Objectives: In this study, we aimed to investigate the contribution of systemic inflammatory biomarkers to the diagnosis and to examine the relationship between cardiac parameters and malignancy in patients with extremity soft tissue sarcomas (STSs).

Patients and methods: Between January 2011 and December 2020, a total of 256 patients (155 males, 101 females; median age: 50 years; range, 18 to 87 years) who were diagnosed with benign and malignant soft tissue tumors were retrospectively analyzed. The control group consisted of a total of 150 age- and sex-matched healthy individuals (83 males, 67 females; median age: 52 years; range 19 to 76 years) with complete blood count analysis and having no STS. Demographic characteristics, laboratory parameters, and echocardiographic data of the patients were obtained from the hospital database. The neutrophil-to-lymphocyte ratio (NLR) and platelet-to-lymphocyte ratio (PLR) were calculated.

Results: Of a total of 256 patients included, 99 were diagnosed with benign tumors and 157 with malignant tumors. Lipoma was observed with the highest frequency of 40.4% among benign tumors, while malignant mesenchymal tumor (35.0%) was the most common tumor in the malignant group. There was no significant difference between the control and benign groups (p=0.198 and p=0.553, respectively), while the NLR and PLR of the malignant group were higher than both the control and benign groups, indicating a statistical significance (p<0.001). Total cholesterol, albumin, and ejection fraction (EF) levels of patients in the malignant group were significantly lower than the benign group (p=0.01, p<0.001, and p=0.046, respectively). According to the receiver operating characteristic curve, a cut-off value of 2.17 for NLR (sensitivity=64.1%, specificity=72%) and a cut-off value of 138.2 for PLR (sensitivity=60.9%, specificity=60.7%) were determined to distinguish malignant patients from healthy individuals. To distinguish malignant patients from the benign group, the cut-off values of NLR and PLR were 2.24 (sensitivity=62.8%, specificity=67.7%) and 137.9 (sensitivity=61%, specificity= 59.6%), respectively.

Certain markers, such as C-reactive protein and D-dimer in blood tests, have been previously described to differentiate benign soft tissue tumors and STSs. However, these markers are useful, but not definitive.[3] It is clear that generalizable and reliable parameters are needed in all soft tissue tumors, but despite many studies, specific blood markers for soft tissue tumors are still not available.

In recent years, there is a growing number of evidence showing that systemic inflammatory response (SIR) plays a critical role in cancer development. The components of SIR, neutrophils, lymphocytes and platelets, are considered to participate in the proliferation and migration of tumor cells.[6] Two recent studies have shown that representative indices derived from inflammatory cells, neutrophil-to-lymphocyte ratio (NLR) and platelet-to-lymphocyte ratio (PLR), are prognostic in STSs.[7,8] However, to the best of our knowledge, there is no study investigating their effects in the differential diagnosis of soft tissue tumors located in the extremities.[9] In addition, data on cardiac function values and the status of lipid profile in soft tissue tumors are quite limited. In the present study, we, therefore, aimed to examine the effects of NLR and PLR in the detection of soft tissue tumors in the extremity and in the differential diagnosis of benign and malignant tumors, and to analyze cardiac markers in the presence of tumors.

The control group consisted of a total of 150 age- and sex-matched healthy individuals (83 males, 67 females; median age: 52 years; range 19 to 76 years) who were admitted to the Orthopedics and Traumatology outpatient clinic of the study center. The control group had complete blood count analysis who were admitted for infectious diseases, trauma, fracture or reasons other thana tumor. Those with incomplete data, having high C-reactive protein or procalcitonin values were excluded from the study. The NLR and PLR were calculated by dividing the absolute neutrophil and platelet counts by the absolute lymphocyte count, respectively. A written informed consent was obtained from each participant. The study protocol was approved by the University of Health Sciences Dr. Abdurrahman Yurtaslan Ankara Oncology Health Implementation and Research Center Ethic Board of Clinical Research (Date/No: 2020-07/732). The study was conducted in accordance with the principles of the Declaration of Helsinki.

Statistical analysis was performed using the IBM SPSS for Windows version 22.0 (IBM Corp., Armonk, NY, USA). Descriptive data were presented in mean ± standard deviation (SD) or median (min-max) for continuous variables and in number and frequency for categorical variables. Normal distribution for continuous variables was assessed with the visual (histograms and probability graphics) and analytic methods (Kolmogorov-Smirnov test). All the data did not fit the normal distribution. The Mann-Whitney U test was used for comparative analysis between the two independent groups. Comparison analyses for categorical variables between the separate groups were carried out using the chi-square test. The receiver operating characteristic (ROC) curve was used to identify the predictive value of the preoperative NLR and PLR for malignant-control distinction and malignant-benign distinction. The area under the ROC curve (AUC) results were considered excellent for AUC values between 0.9-1, good for AUC values between 0.8-0.9, fair for AUC values between 0.7-0.8, poor for AUC values between 0.6-0.7, and failed for AUC values between 0.5-0.6.[10,11] The Youden index was used to determine the cut-off value calculated as max (sensitivity + specificity - 1).[12] A p value of <0.05 was considered statistically significant.

Table 1. Localization and type of tumors
×

Table 4. The predictive value of the preoperative NLR and PLR for malignant-control distinction and malignant-bening distinction
× 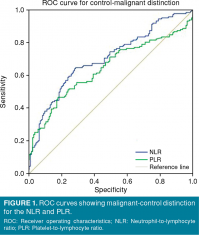 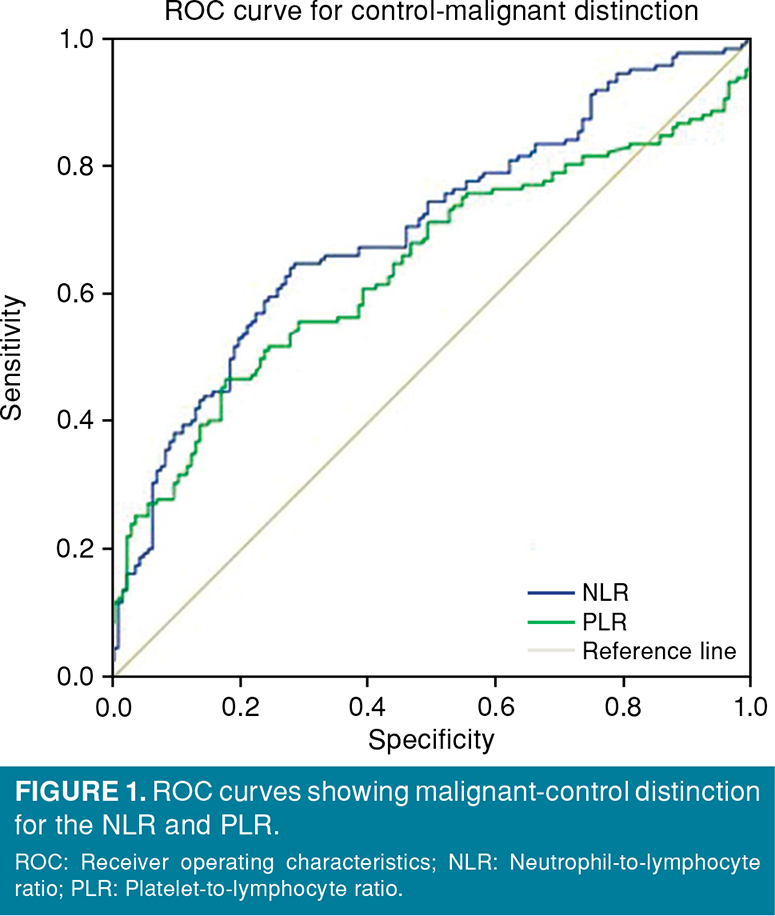 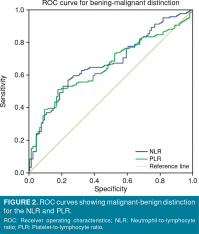 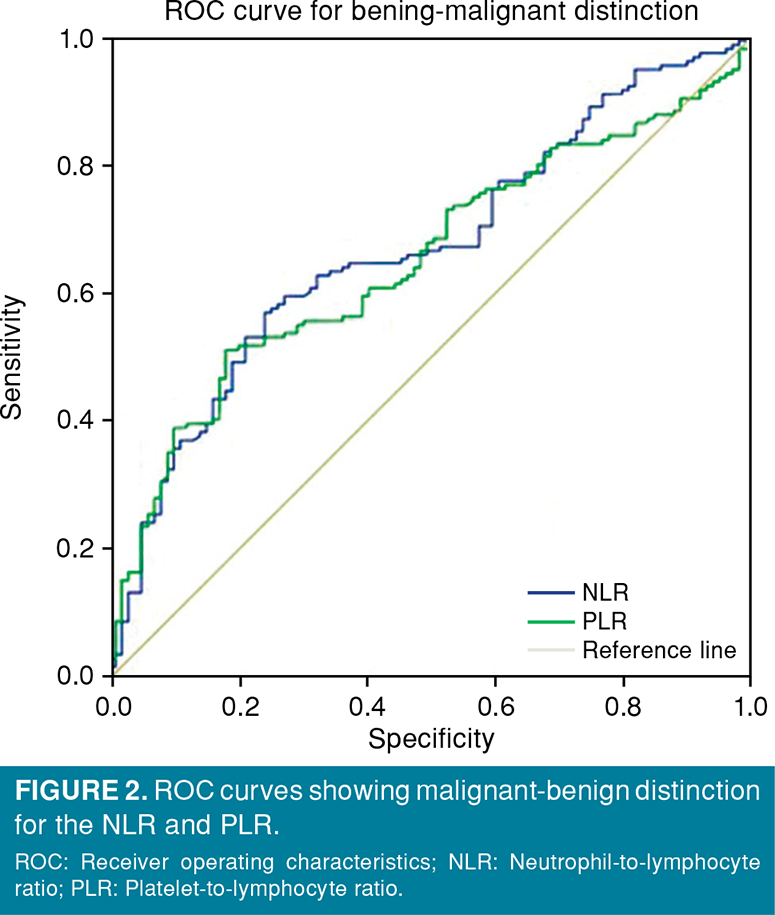 In the present study, we investigated the utility of markers such as NLR and PLR in detecting the presence of benign and malignant soft tissue tumors located in the extremities. None of these markers contributed to the detection of the presence of benign tumors, while both markers could detect the presence of malignant tumors separately. In addition, there was a significant difference in the NLR and PLR in differentiating malignant tumor from benign tumor. To the best of our knowledge, this study is the first to report the use of PLR in the diagnosis of STS. In addition, we observed that the total cholesterol, albumin, and EF levels of the patients in the malignant group were significantly lower than the patients in the benign group. In recent years, publications on the use of preoperative blood values and rates in determining the presence of sarcoma and prognosis have been increasing. Values such as neutrophil, lymphocyte, platelet, NLR, PLR, albumin, and total cholesterol are low-cost and easily applicable methods in all patients for routine follow-up before surgery. Recently, Arıkan et al.[13] reported that mean platelet volume (MPV) and MPV/platelet ratio are useful in the diagnosis of STS, but did not contribute to the prediction of the prognosis.[13]

In recent years, for the approach to benign and malignant tumors, systemic inflammatory biomarkers such as NLR and PLR have emerged as valid alternatives to traditional methods that have been shown to be associated with diagnosis and/or prognosis in different tumor types.[6-8] These ratios are easily obtainable values obtained from routine complete blood count without additional economic burden.

To the best of our knowledge, there are studies examining the contribution of PLR to the prediction of the prognosis of STS; however, there is no study examining its contribution to the diagnosis. Therefore, this study is the first to report that PLR is a diagnostic marker. Que et al.[15] showed that both NLR and PLR were prognostic in STS and reported that PLR was superior to NLR in predicting prognosis. In the current study, we found that PLR was significantly higher in STS compared to benign tumors and control group. In addition, the cut-off value was obtained for the PLR ratio in the differential diagnosis of malignancy.

The process of membrane biogenesis in neoplastic diseases requires large amounts of lipids, including total cholesterol, lipoproteins and triglycerides.[16] Previous studies have suggested that abnormal lipid profiles may be associated with the development and progression of cancers.[15] In the current study examining soft tissue tumors located in the extremities, total cholesterol levels were found to be significantly lower in patients with sarcoma compared to patients with benign tumors or in the control group, consistent with these findings.

Many studies of sarcomas have focused on the cardiac effects of chemotherapeutic agents, emphasizing the importance of cardiac risk factors and baseline cardiac evaluations.[17] The necessity of cardioprotective treatments before chemotherapy and treatment methods are among the current issues. However, as far as we know, it has not been shown previously that preoperative EF values are lower in patients with sarcoma than healthy individuals. These results may raise the issue that these patients may have low baseline cardiac parameters and preventive measures may be taken before potential surgical treatments and chemotherapies that may have cardiac side effects.

In the present study, pre-treatment albumin levels of sarcomas were found to be significantly lower than those with benign tumors and the control group. Barreto-Andrade et al.[18] also found that albumin was prognostic in STS. It is evident that there is a need for larger studies investigating the contribution of albumin value to diagnosis and screening in STSs.

This study has some limitations. It has a single-center, retrospective design with a relatively small sample size, primarily due to the rarity of tumoral diseases. We believe that future multi-center studies with larger sample sizes would further investigate the characteristics of inflammation and the role of systemic inflammatory biomarkers in soft tissue tumors of the extremity. On the other hand, the current study has several strengths. First, indicators of infection were evaluated and the effects of infection on inflammatory markers were prevented by excluding patients who were thought to be infected. Second, the diagnostic values of both inflammatory markers were evaluated and cut-off values were determined for both separately. These findings indicate that clinicians should pay attention to high NLR and PLR in the diagnosis of soft tissue masses with suspected malignancy. The NLR and PLR are easy to measure with simple, low-cost, widely used, and standardized tests.