Is treatment termination safe in developmental dysplasia of the hip following ultrasonographic normalization?

In children undergoing DDH treatment, the osteochondral borders of the acetabulum visible on ultrasonography may not correspond with the osteochondral borders seen on radiographs.[2] For these patients, it cannot be guaranteed that the ossification of the acetabular region seen on coronal sections of ultrasonography would be also calcified on X-ray.[2,3] For instance, while the healing callus formation cannot be seen on radiography during the early period of the fracture union process, it can be seen very well on ultrasonography (Figure 1a, b). Therefore, in this case, if the immobilization is discontinued and movement is initiated earlier according to ultrasonography, the fracture healing may not be guaranteed. 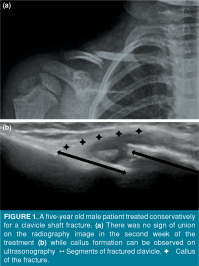 Figure 1. A five-year old male patient treated conservatively for a clavicle shaft fracture.&nbsp;(a)&nbsp;There was no sign of union on the radiography image in the second week of the treatment&nbsp;(b)&nbsp;while callus formation can be observed on ultrasonography&nbsp;&hArr;&nbsp;Segments of fractured clavicle.&nbsp;&diams;&nbsp;Callus of the fracture.
×

According to this hypothesis, the process mentioned above may be valid for the ossification of the cartilage acetabulum of infants treated for DDH. In the literature, a high rate of early acetabular dysplasia has been reported in infants, when the DDH treatment has been discontinued after the hips have appeared normal on ultrasonography.[3]

In conclusion, it may be safer to consider normalization on radiography rather than normalization on ultrasonography before terminating the treatment of DDH in infants (Figure 2a, b). We have been using Graf method in diagnosis and monitoring of treatment of DDH for many years. In our opinion, physicians should not hesitate to take pelvic radiography before ceasing DDH treatment. Additionally, even if the hip ultrasonography findings in the neonatal period are normal, we recommend taking pelvic radiography between 6 to 12 months before the child starts walking, in the presence of clinical examination findings or risk factors of DDH. Nevertheless, there is a need for prospective, controlled studies of larger series to elucidate this important issue.

Figure 2. A six-month-old infant treated conservatively for dysplasia of the hip; (a) normal hip seen on ultrasonography, (b) while radiography shows continuing left hip dysplasia.
× 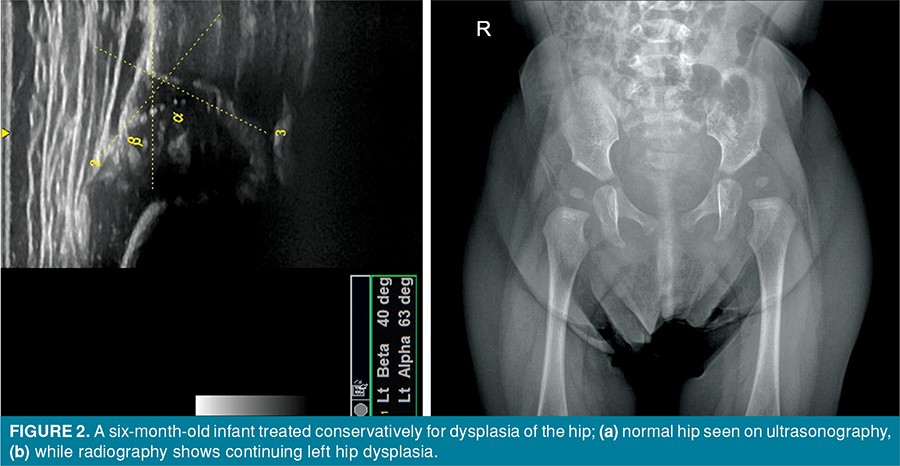