Patients and methods: A total of 172 patients (111 males, 61 females; mean age: 24.3±15.3 years; range, 7 to 82 years) diagnosed with osteosarcoma in our institution between January 2002 and December 2018 were retrospectively analyzed. A total of 165 healthy individuals (115 males, 50 females; mean age: 20.2±9.2 years; range, 10 to 65 years) who did not have infectious, rheumatological or hematological diseases or any pathological finding were assigned as the control group. The clinical, laboratory, and demographic findings of the patients were obtained from hospital records. Pre-treatment NLR, PLR, and LMR values were calculated in all patients. Diagnostic and prognostic values of pre-treatment NLR, PLR and LMR were assessed using receiver operating curve (ROC) analysis. The Kaplan-Meier method was used for survival analysis.

Conclusion: Based on our study results, pre-treatment NLR, PLR and MLR have diagnostic and prognostic values in osteosarcoma.

Osteosarcoma is the most common primary malignant bone malignancy which accounts for about two- thirds of all cases.[1,2] Most of the osteosarcomas are classified as traditional type, high-grade tumors, and diagnosed by radiological examinations and biopsy. Typical osteosarcomas are osteoblastic or osteolytic lesions which can be demonstrated with a periosteal reaction on conventional radiographs. However, osteosarcoma can break out beyond the traditional types of findings, and diagnosing some of its variants is difficult for clinicians.[3] Serum tumor markers used in the diagnosis of osteosarcoma usually result in a very little success. While the response to treatment and disease prognosis can be estimated with the help of some serum markers, there is no inexpensive and widely available marker to help in diagnosis.[4] Besides, poor prognosis and high mortality rates in metastatic osteosarcoma are similar to those of 20 years ago, despite current multimodality treatment.[5]

An increasing number of evidence has shown that, in cancer patients, host-related variables may help in diagnosis with an impact on prognosis. In particular, systemic inflammatory response and related variables are reported to have a remarkable effect.[6,7] Demonstration of the increased presence of inflammatory cells in the tumor local microenvironment has also triggered the interest in markers, such as circulating leukocyte counts and neutrophil-to-lymphocyte ratio (NLR).[8] It has been shown that inflammation-based scores may contribute to diagnostic and prognostic evaluation in various types of cancer.[9-12]

In the literature, prognostic markers calculated on the basis of inflammatory cells are shown to have a prognostic value in osteosarcoma patients. However, both the diagnostic and prognostic effects of these markers on osteosarcoma have not been fully clarified. In the present study, we aimed to investigate the effect of prognosis of the levels of pre-treatment inflammatory markers (NLR, platelet- to-lymphocyte ratio [PLR], and lymphocyte-to- monocyte ratio [LMR]) on patients with osteosarcoma and to compare them with the healthy controls for identifying the diagnostic value.

Patients with a histopathologically confirmed osteosarcoma diagnosis who had no previous anticancer treatment and who had complete medical and follow-up records were included. Patients with elevated C-reactive protein results, who were lost to follow-up, those with diabetes mellitus, infections disease, rheumatological diseases and other inflammatory diseases, any hematological disease, previously treated with non-steroid anti- inflammatory drugs, and those with missing medical records were excluded from the study. Clinical and demographic data of the patients were reviewed from the hospital records. Age, sex, tumor location, side, pre-treatment complete blood count results, date of diagnosis, the final follow-up date, surgical procedure, the status of metastasis at diagnosis, mortality, and recurrence records were reviewed from the patient files. The NLR and PLR were calculated as the absolute count of neutrophils and platelets, respectively, divided by the absolute lymphocyte count. The LMR was calculated as the absolute count of lymphocyte divided by the absolute monocyte count.

Statistical analysis was performed using the IBM SPSS for Windows, version 22.0 software (IBM Corp., Armonk, NY, USA). Descriptive statistics are presented in number and percentage for categorical variables and in mean ± standard deviation or median (min-max) for continuous variables. Normal distribution for continuous variables were assessed with visual (histograms and probability graphics) and analytic methods (Kolmogorov-Smirnov test). In the data that do not fit the normal distribution, the Mann-Whitney U test was used for comparison analysis between the two independent groups. Comparison analyses for categorical variables between independent groups were done by chi-square test. Diagnostic and prognostic values of pre-treatment NLR, PLR, and LMR were assessed using the receiver operating curve (ROC) analysis. The area under the ROC curve (AUC) results were considered excellent for AUC values between 0.9-1, good for AUC values between 0.8-0.9, fair for AUC values between 0.7-0.8, poor for AUC values between 0.6-0.7, and failed for AUC values between 0.5-0.6.[13,14] Following the ROC analysis results, the AUC and cut-off values, sensitivity and specificity of these cut-offs, likelihood ratio (LHR), positive predictive value (PPV) and negative predictive value (NPV) were calculated. Survival analyses were performed using the Kaplan-Meier method and log-rank test. A p value of <0.05 was considered statistically significant.

Of the patients with osteosarcoma, 11.6% of the patients had metastases at the time of diagnosis, while 44.2% of the patients died during follow-up. According to the localization, tumors were mostly located in the femur (57%) and tibia (17.4%). The age and sex distributions of the control and the patient groups were similar (p=0.528 and p=0.313, respectively) (Table I).

The NLR and PLR values of the sarcoma group were significantly higher than the controls (p<0.001) (Table II). The LMR values were statistically significantly lower in the sarcoma group, compared to the controls (p=0.001). The diagnostic power of NLR, PLR, and LMR with ROC analysis was evaluated (Figure 1). Accordingly, the highest significance in AUC values was obtained for NLR (AUC=0.763). The calculated value of AUC for PLR and LMR was statistically significant, while the statistical power was weak, compared to NLR (AUC=0.681 and 0.603). 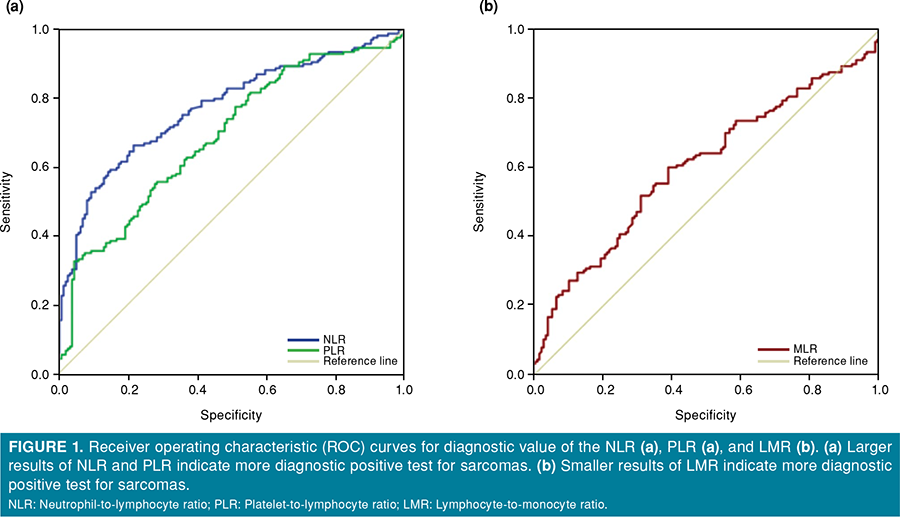 The predictability of NLR, PLR, and LMR values for mortality was evaluated by the ROC analysis and the statistical significance of AUC values obtained from ROC analysis was presented in Table IV and Figure 2. The NLR, PLR, and LMR were found to be predictors of mortality. The cut-off value was found to be 3.28 for NLR, 128 for PLR, and 4.22 for LMR. The prognostic value of NLR for mortality was higher than (AUC=0.749) PLR (AUC=0.688) and LMR (AUC=0.609). 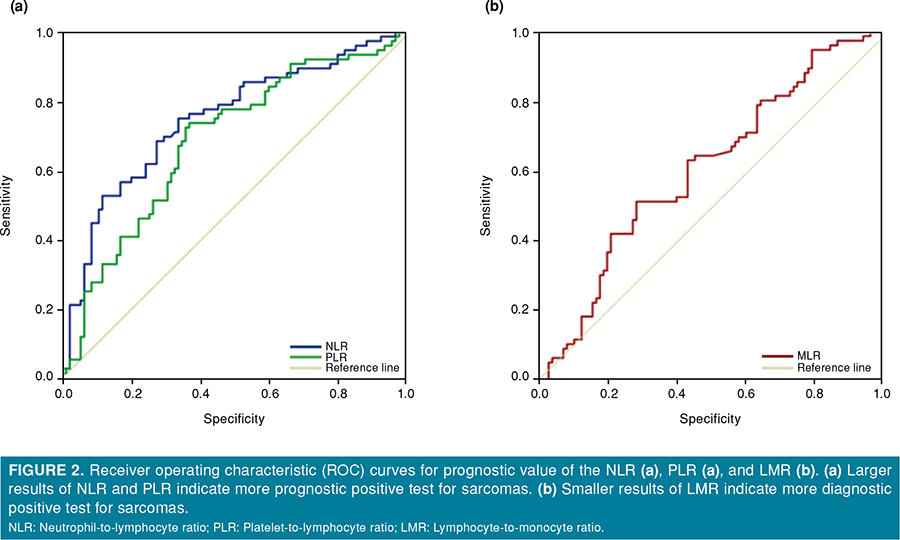 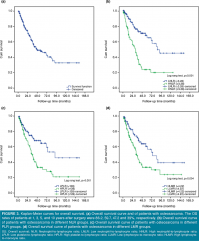 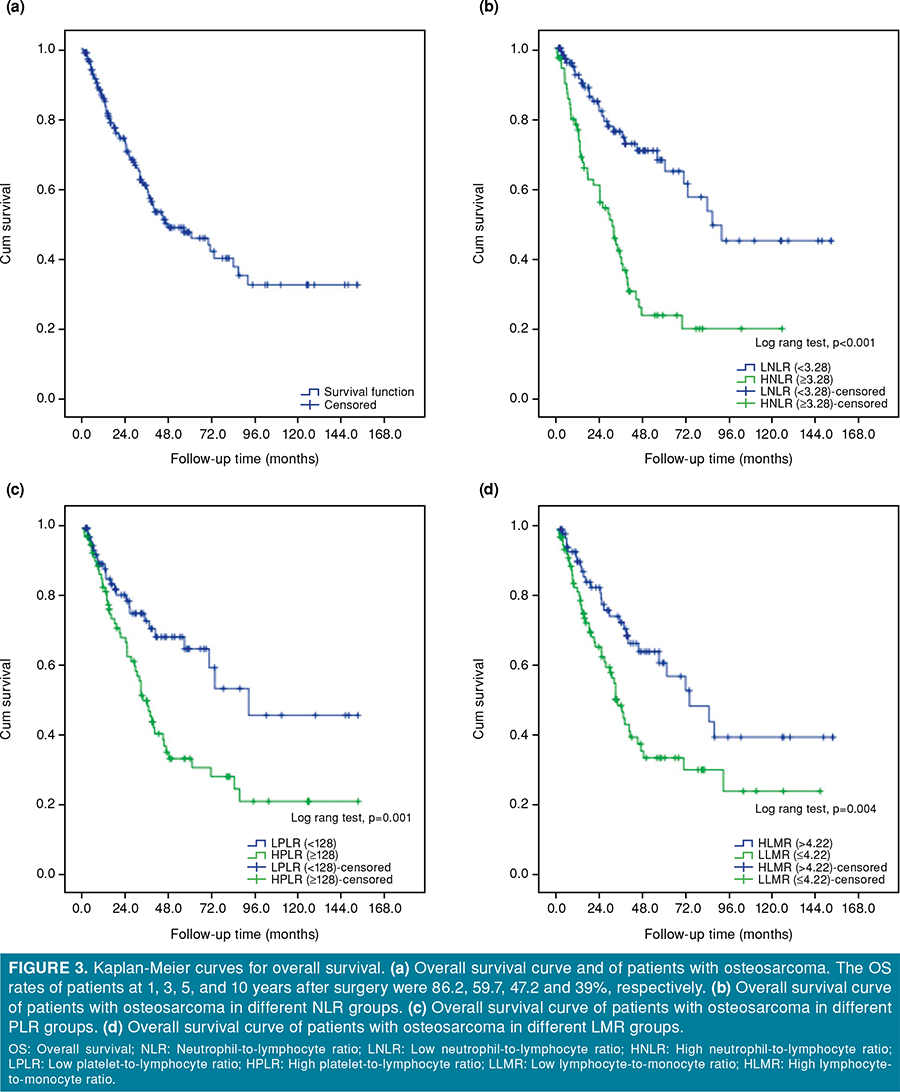 In the current study, we evaluated factors showing the systemic inflammatory response from two different perspectives. Pre-treatment values of NLR, PLR, and LMR in the peripheral blood of osteosarcoma patients were found to be diagnostic and prognostic values. The prognostic value of pre- treatment inflammatory markers (NLR, PLR, and LMR) in the osteosarcoma patients was mentioned in the literature.[5,15,16] Consistent with previous studies, our study confirmed that high NLR, PLR, and low LMR were significantly associated with poor OS.

To the best of our knowledge, the current study is the one of the premise studies showing both diagnostic and prognostic value of inflammatory based markers.[17] We demonstrated that inflammatory markers, particularly NLR, could be significantly supportive in diagnosing osteosarcoma. In a patient having a suspicion of osteosarcoma, the clinical suspicion increased, when the NLR value was ≥2.45, while the probability of the disease progressing with poor prognosis became stronger, if the pre-treatment NLR was ≥3.28.

In a study, the NLR cut-off values were found to be 3.43 for OS and 3.67 for progression-free survival, and it was found that the probability of poor prognosis on both parameters increased in patients with NLR values above the cut-off.[18] The prognostic value calculations in the current study are consistent with the literature. Another important finding of the current study is that the OS rate of patients with an NLR value of ≥3.28 was significantly lower at three (39.7%) and five (23%) years.

Similar to changes in peripheral blood immune cells, changes in immune infiltrations around the tumor microenvironment are also reliable and effective prognostic factors for many tumors, including bone and soft tissue sarcomas.[19] Besides, early peripheral blood lymphocyte recovery after initiation of chemotherapy is a reliable prognostic indicator for superior outcomes in patients with osteosarcoma.[20,21] Considering the aforementioned information and current study findings, the high NLR, PLR, and low LMR ratio appeared as a poor prognostic indicator, which could be due to reflection of the inability of the host metabolism to respond to the tumor with sufficient cellular immunity.

In the literature, there are studies on the diagnostic value of inflammatory variables in malignancies. In a study, the NLR was shown to have a diagnostic value for cartilaginous tumors, although it was not found to be effective in distinguishing the subtypes of the tumor.[22] Another study demonstrated that NLR + LMR combination was effective both in separating glioma from acoustic neuroma and meningioma, and differential diagnosis of glioblastoma multiforme from low-grade gliomas.[9] The value of inflammatory markers was also investigated in determining the malignancy potential of spinal tumors and the cut- off value was calculated as 3.19 for NLR and as 141 for PLR value. Malignancy potential of spinal mass patients with the results above these values has been reported to be high.[23] Although there are studies showing the diagnostic value of inflammatory markers, a study on ovarian mass reported that NLR was an ineffective marker in predicting the malignant characteristics of a pelvic mass.[24] The findings of the current study showed that inflammatory variables could be supportive in diagnosing osteosarcoma such as spinal masses, cartilaginous tumors, and gliomas.

Nonetheless, there are several limitations to this study. First, this study has a single-center, retrospective design. Second, despite its advantages in this cohort, inflammatory markers were a non-specific predictor for osteosarcoma and, thus, inevitably had intrinsic weaknesses and limitations. However, there are no specific serum markers for osteosarcoma. Non-specific findings such as NLR, PLR, and LMR could be beneficial to support the suspicion of clinical and radiological osteosarcoma for some patients.

In conclusion, our study results suggest that patients with a bone mass with malignant potential have higher levels of NLR and PLR and lower levels of LMR than healthy individuals. Pre-treatment NLR, PLR, and MLR have diagnostic and prognostic values in osteosarcoma, supporting the prognostic value of inflammatory markers in osteosarcoma. In addition, NLR may be a superior distinguishing factor to LMR and PLR. There are many different situations which determine the prognosis of neoplastic diseases, and NLR may be one of them. However, the NLR values cannot be a standalone decision maker in patients with osteosarcoma, but they can be one of the variables to be taken into account while making a treatment plan. Further multi-center, large-scale, prospective studies are needed to confirm our findings and investigate the value of the combined use of these inflammatory markers to prolong the remission time of patients with osteosarcoma.