Papillary intralymphatic angioendothelioma (PILA), an intralymphatic lesion of vascular ducts, is an extremely rare tumor. It is generally encountered as an unexpected pathology following excision of a vascular skin lesion. Re-excision is the commonly preferred treatment option once the pathological diagnosis is established. In this article, we present a 12-year-old male patient with a PILA treated with re-excision, skin grafting, and sentinel lymph node biopsy. The patient was symptom-free at annual follow-up. A sentinel lymph node biopsy during re-excision might be a good option in the surgical management of PILA. Frequent examination of lymph nodes and skin lesion also might be beneficial during the follow-ups.

A 12-year-old male patient was admitted to our institution with the complaint of a subcutaneous nodule at his anterolateral surface of right leg. The tumor had first been noticed by the patient's family about a month ago and had grown slowly since then. Physical examination revealed a tumor, about 2 cm in diameter with a well-demarcated border, located within the skin and subcutaneous tissue on the anterolateral surface of the right leg (Figure 1). It had a bluish discoloration without pain or ulceration. The tumor was initially considered a vascular lesion and we decided to perform an excisional biopsy under local anesthesia within a week after the initial admission. The lesion was excised with 1 to 2 cm borders including skin and subcutaneous tissue above the fascial plane. A written informed consent was obtained from the patient's legal guardians. 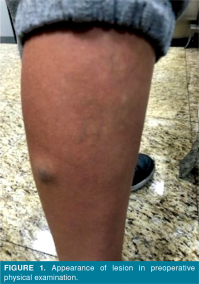 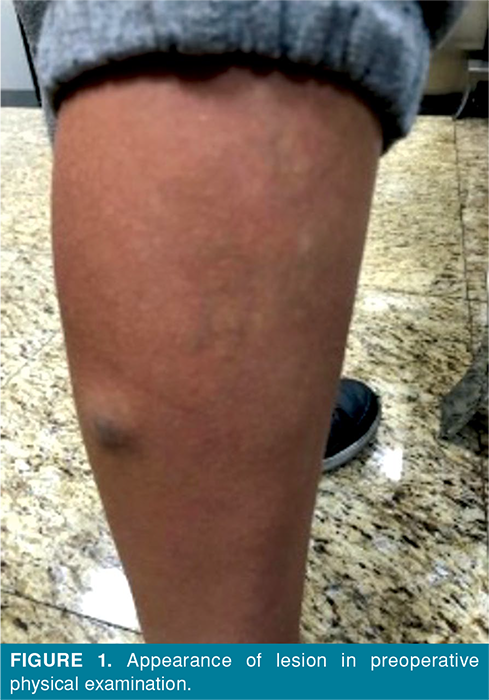 In the pathological examination, the size of the tumor was measured 1.6x1.5x0.5 cm. Histologically, the tumor was representing an intralymphatic lesion composed of vascular channels and papillae with hyalinized cores (Figure 2a). Vascular channels and papillae were lined with cluster of differantiation (CD)34-positive endothelial cells (Hobnail cells) that were projecting into the lumen (Figure 2b). Surgical margins were free of tumor. Since the lymph node metastasis of the tumor was previously described in the literature, a lymph node examination was performed as soon as the pathological diagnosis was established.[1] Lymphadenopathy was not palpated in the groin and popliteal region. There was no pathology in the ultrasound imaging of lymph nodes.

Because of the local aggressive feature of PILA, re-excision was planned.[1] The re-excision was performed with 2 cm borders containing the fascial plane. Additionally, sentinel lymph node biopsy was performed.[9] Pathological results of re-excision material were found free of tumor at all borders and sentinel lymph node sample material was reported as a reactive lymph node. No complications such as infection, graft loss or dehiscence were observed during the postoperative period. The patient was consulted to oncology after the second surgery.

During the physical examination at third- and sixth-month follow-up, there was no new skin lesion or palpable lymph nodes. The patient was symptom- free at the annual follow-up (Figure 3). 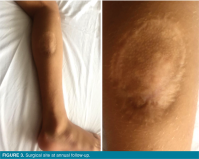 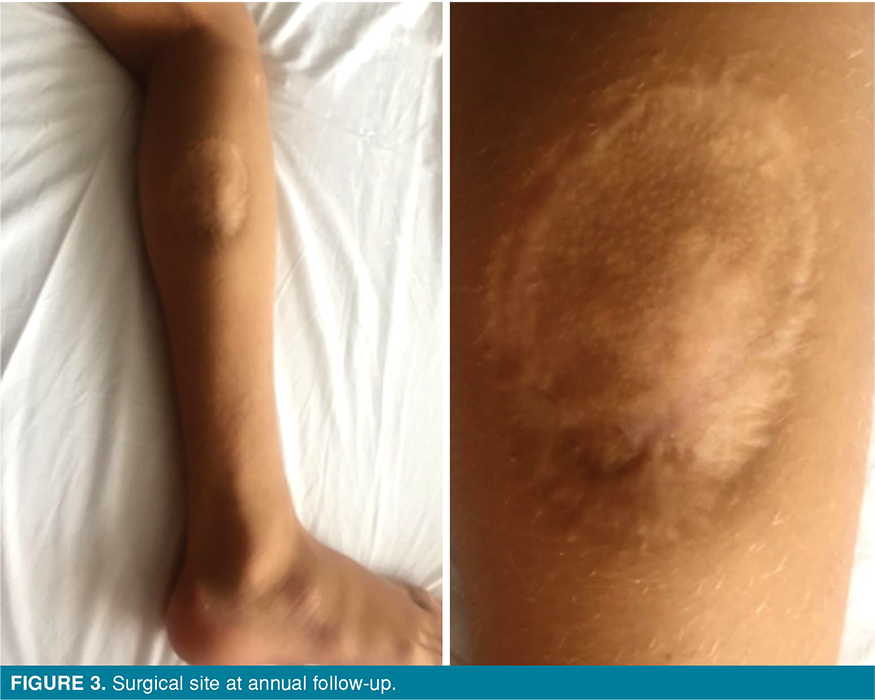 In 1969, Maria Dabska described papillary intralymphatic angioendothelioma as a malignant childhood tumor in six children.[1] The tumor was described as a low-grade angiosarcoma characterized by papillary endovascular proliferations of atypical endothelial cells and anastomosing vascular channels.[9] In 1998, Fanburg-Smith et al.[10] renamed the tumor as PILA because of its proliferative borderline features and the lymphatic phenotype. In 2013, the latest edition of World Health Organization tumor classification (4th edition) revised the tumor description to rarely metastasizing lymphatic vascular neoplasm.[11] The PILA is an extremely rare tumor and less than 40 PILA cases have been reported in the literature.[8] Although PILA was described as a childhood tumor, later studies revealed that both children and adults can be affected without sex predilection.[7] Clinically, the tumor has been reported being a slow-growing intradermal nodule which was violaceous, pink, or bluish-black in color, and the diameter of the lesion varied between 1 and 40 cm.[1,10] The diameter of the lesion was 2 cm in the patient. Thus, we preferred to perform an excisional biopsy. If the lesion is believed to require further reconstructive procedure due to the wider diameter, an incisional biopsy could be an initial option.

Most of the PILA cases are located in the dermis and soft tissues of the extremities. However, PILA may also involve deeper structures such as spleen, tongue, and testis which are originated from endothelial cells.[1-7] Papillary intralymphatic angioendothelioma was also seen as a primary bone tumor in some cases. Papillary intralymphatic angioendothelioma was shown in epiphysis and metaphysis of distal femur, clavicle and facial bones. Papillary intralymphatic angioendothelioma of facial bones and clavicle were detected as multiple lesions.[8] Radiographic features of PILA include periosteal reaction and radiolucency around the bone. On computed tomography scans, it has osteolytic characteristics. Besides, on magnetic resonance imaging scans, PILA has high intensity on T2-weighted images and low intensity on T1-weighted images.[8]

Regional lymph node metastasis was observed in two of the six patients presented by Dabska in 1969 and the invasion of tumor into deeper structures including bone, musculature, fascia, and/or tendons was observed in three of the original six cases.[1] In addition, mortality was reported in the literature due to PILA.[1] The malignant transformation, lung, and liver metastases of PILA were shown in a recent study. The patient, who had lung and liver metastases, died three years after being diagnosed with PILA.[12]

Clinically, PILA could resemble a cyst or other benign intradermal lesions. Only one study in the literature has shown a photograph of the primary PILA lesion.[9,13] To the best of our knowledge, our study demonstrated the second published photo of the PILA in the literature.[14,15]

Papillary intralymphatic angioendothelioma can be locally aggressive so that wide surgical excision seems to be the first treatment option for many authors. However, complete remission of the tumor was reported by chemotherapeutic agents.[16] Fanburg-Smith et al.[10] reported no recurrences, metastases, or residual tumor during follow-ups. On the other hand, regional lymph node and distal organ metastasis of PILA have been reported.[1,12] Thus, we performed a sentinel lymph node biopsy and there was no lymph node metastasis. We believe that sentinel lymph node biopsy for PILA would be beneficial for the patients' clinical course. Also, there is no standard follow-up protocol after surgical treatment. We recommend close follow-ups by assessing local recurrence and lymph node examination. Because of the rarity of the tumor, there is no consensus about the treatment and follow-up protocols.

In conclusion, the diagnosis and treatment approach of PILA remains unclear because of the low number of reported cases. Although the prognosis of PILA seems to be favorable with wide surgical excision, the metastatic potential of the tumor should be kept in mind. As the number of published PILA cases increases, a more standard approach can be determined in diagnosis, treatment approach, and follow-up protocols of the PILA.