Evaluation of the quadrants of femoral neck-head in the cephalomedullary fixation of intertrochanteric fractures with a helical blade: Is inferior posterior quadrant also safe? A clinical study

Objectives: This study aims to investigate the positioning of the helical blade to prevent mechanical complications in surgically fixed intertrochanteric fractures (ITFs).

Patients and methods: In this retrospective study, 392 patients (158 males, 234 females; mean age: 75.5±13.4; range, 20 to 101) years) with ITFs treated in lateral decubitus position with proximal femoral nail anti-rotation in a single center between January 2009 and January 2017 were evaluated. The fractures were classified according to the Orthopedic Trauma Association classification preoperatively and grouped as stable or unstable. Postoperatively, tip-apex distance (TAD), Baumgaertner reduction criteria, and obtained quadrants were evaluated. Patients with an unstable fracture, proper TAD, and acceptable or good reduction were included in the final evaluation for statistical analysis to investigate the safest quadrant to prevent cut-out complication.

Results: Cut-out complications were observed in 19 (4.8%) patients. The scenario; unstable fracture, TAD <25 mm, acceptable or good reduction consisted of 111 patients in total and cut-out complication occurred in four of them (3.6%) (one in center-posterior, one in center-center, one in superior-anterior, and one in superior-center quadrants). There was no statistically significant difference between center-center, inferior-center, and inferior-posterior quadrants (p=0.49).

Conclusion: Inferior-posterior placement is as safe as central-central or inferior-central placement for blade fixation in the surgical treatment of ITF.

Previously, importance of avoiding the varus reduction has been emphasized.[2] Femoral neck is divided into three regions as superior, center, and inferior on coronal plane and anterior, center, and posterior on sagittal plane. Nine quadrants are defined after intersection of these regions.[3] There is still debate on the most suitable quadrant positioning for head-neck fixation device. Center-center or inferior-center quadrants are recommended by many authors.[4-10] Inferior-anterior[10] and inferior-posterior quadrants were also recommended.[11,12] Obtaining a tip-apex distance (TAD) ≤25 mm is an important factor for achieving enough mechanical stability in ITF.[13] However, Kane et al.,[5] Mingo-Robinet et al.,[14] and Herman et al.[15] stated that TAD was not the main factor for preventing mechanical complications in the use of proximal femoral nails.

In this retrospective study conducted at Tepecik Training and Research Hospital, Department of Orthopedics and Traumatology patients with an ITF who were treated surgically with a cephalomedullary implant using helical blade to fix the head-neck fragment between January 2009 and January 2017 were evaluated. There were a total of 536 patients with ITF who were treated surgically in this period. Patients who were followed-up for at least six months and who had radiographs of good quality (to ensure that required measurement and evaluations would be performed) were included. Exclusion criteria were patients with a shorter follow-up, cut-through complications, and low-quality radiographs accordingly. Finally, 392 patients (158 males, 234 females; mean age: 75.5±13.4; range, 20 to 101 years) were included. Flowchart of the study population is shown in Figure 1. The study protocol was approved by the Tepecik Training and Research Hospital Ethics Committee (No: 2020:2/4). A written informed consent was obtained from each patient. The study was conducted in accordance with the principles of the Declaration of Helsinki. 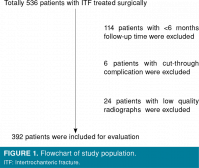 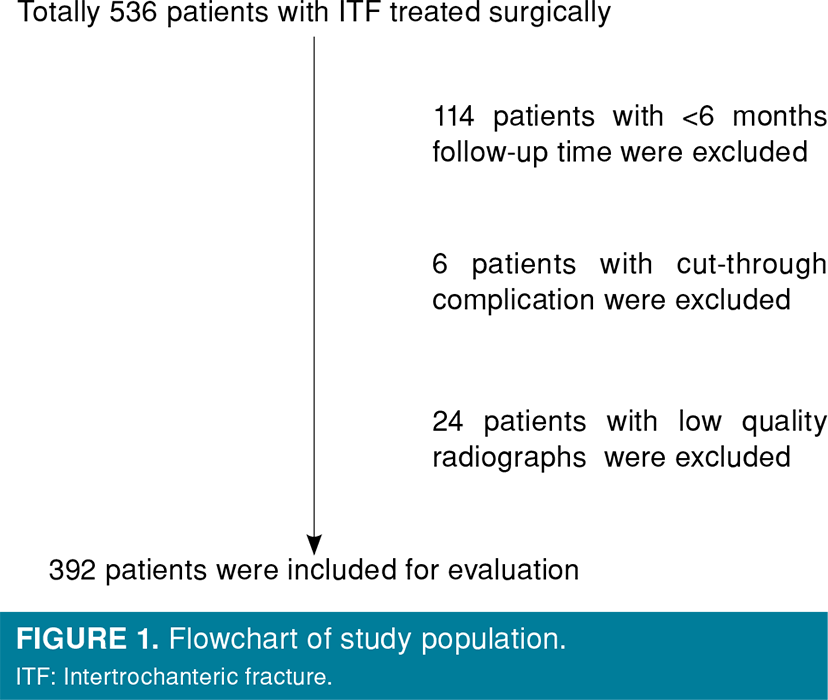 The fractures were classified according to the Orthopedic Trauma Association (OTA) classification preoperatively.[16] Types 31 A1 through 31 A2.1 fractures were accepted as stable, and types 31 A2.2-3 and 31 A3 as unstable.[17] Postoperatively, TAD, collo- diaphyseal angles (CDAs), and obtained quadrants according to Cleveland and Bosworth definition.[3] were evaluated. Calcar referenced TAD measurement was performed in the radiographs in which helical blade was positioned in inferior quadrant.[18] Quality of the reductions was grouped as good, acceptable, and poor according to Baumgaertner criteria.[4] In his original study, Baumgaertner defined the good reduction as normal or slight valgus alignment in coronal plane, less than 20° angulation in the lateral plane, and no more than 4 mm displacement in any plane. For a reduction to be defined as acceptable, it has to meet the criterion of a good reduction with respect to either alignment or displacement but not both. And finally, poor reduction met neither criterion.[4] Measurement methods of TAD, CDA, and determination of quadrants are demonstrated in Figure 2a-f. All evaluations were performed by the same author. Reductions were grouped as varus if the obtained CDA was under 130° postoperatively.[15] Tip-apex distances were grouped as proper if the measured value was under or equal to 25 mm. 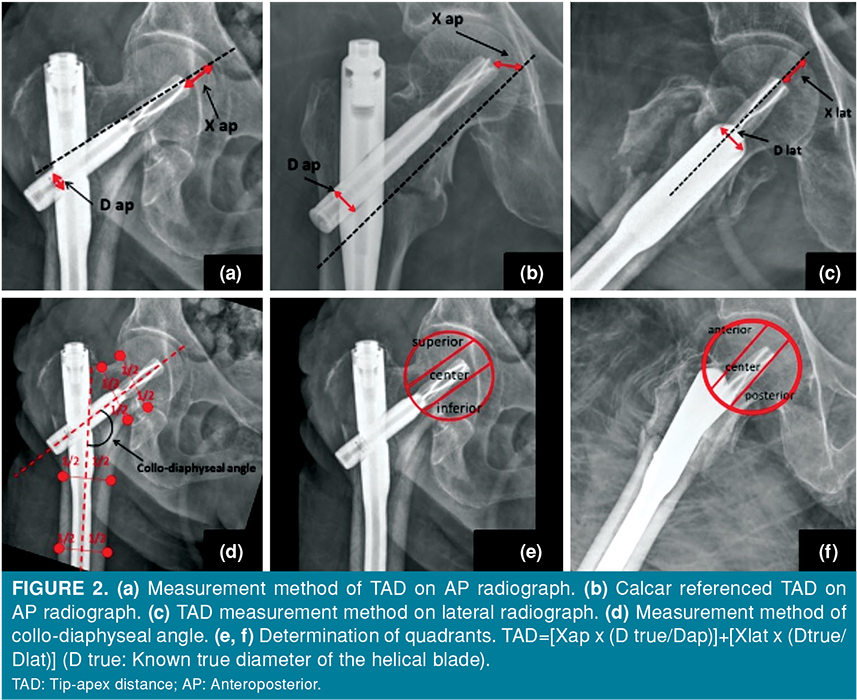 Table 1. Different scenarios according to stability of fracture, tip-apex distance, and quality of reduction
×

Statistical analysis was performed using the PASW version 17.0 software (SPSS Inc., Chicago, IL, USA). Mean values of the TAD and CDAs were calculated for each quadrant. Normality of the data was assessed by Shapiro-Wilk test. For the continuous data, t-test was used for comparison if the distribution was normal. Mann-Whitney U test was used if the data were not normally distributed. Chi-squared test was used for the comparison of categorical data. A p value below 0.05 was accepted as the statistical significance. 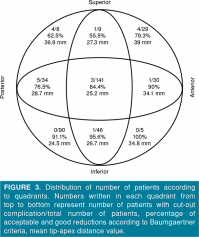 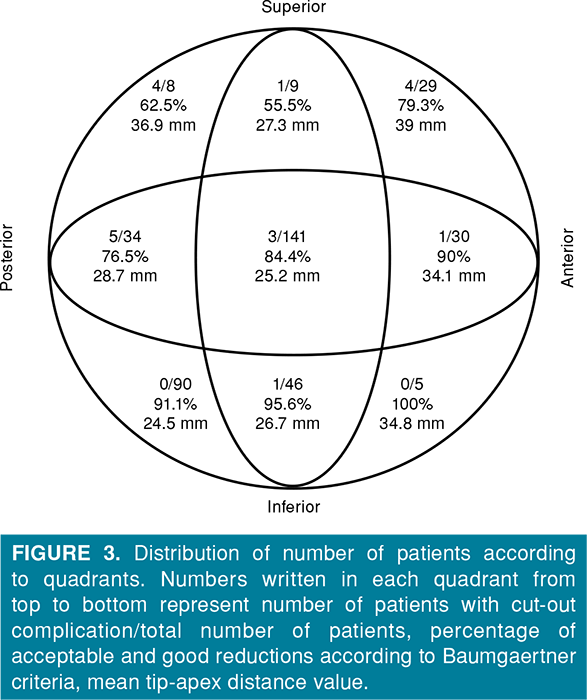 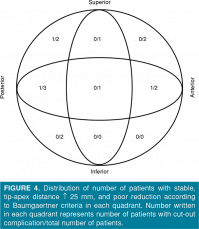 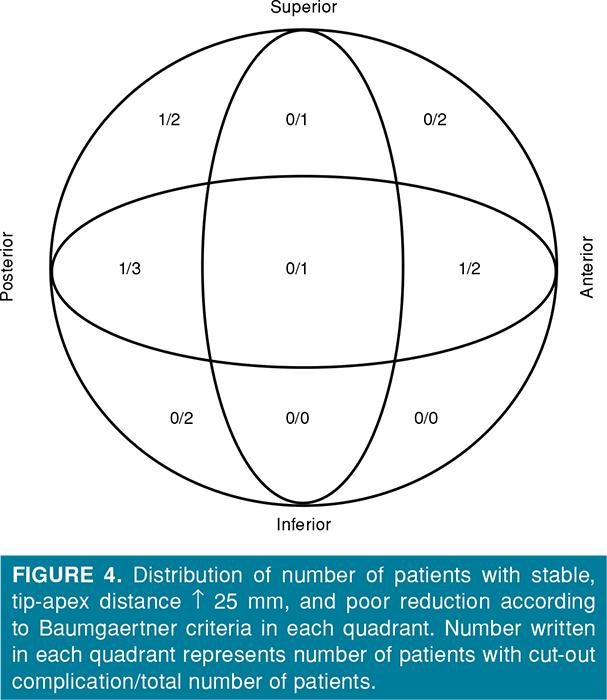 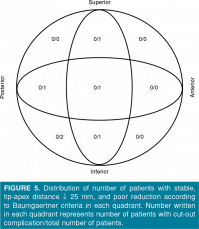 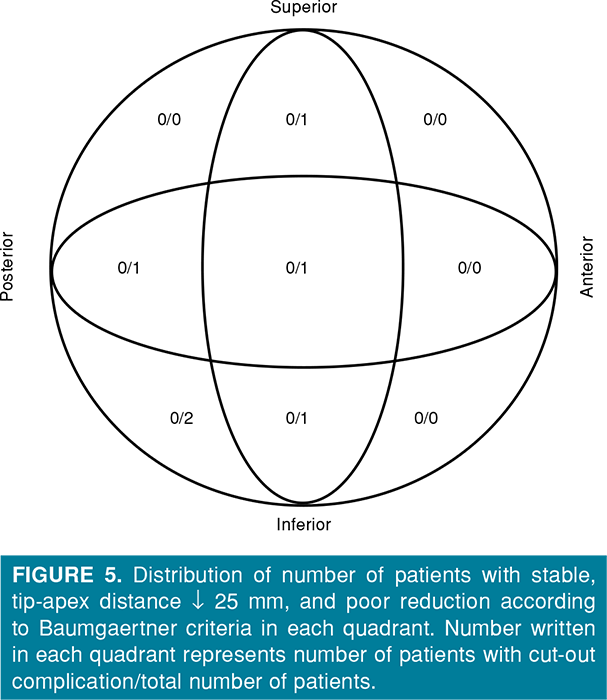 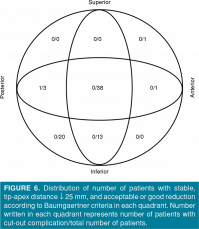 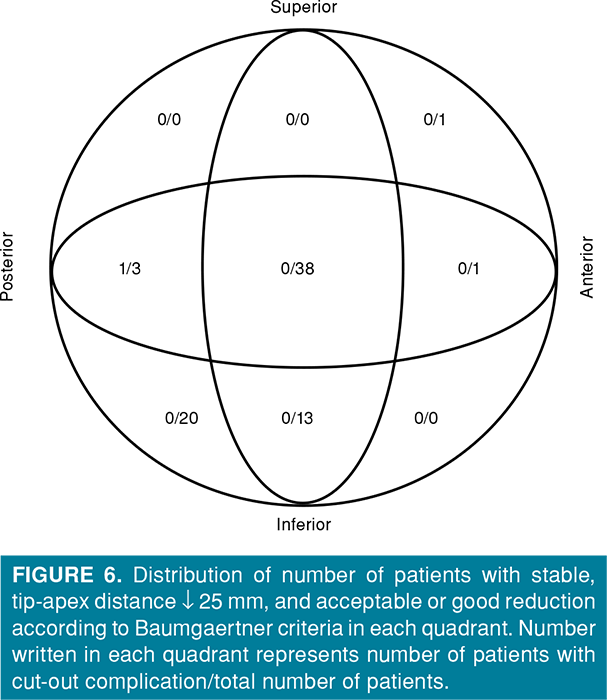 The third scenario (unstable, TAD Ø 25 mm, acceptable or good reduction) was evaluated as the most appropriate scenario to evaluate the importance of quadrant choice in minimalizing the risk of cut- out (Figure 7). In this scenario, there were four patients who experienced cut-out complication (3.6%) (one in center-posterior, one in center-center, one in superior-anterior, and one in superior-center quadrants). There was no statistically significant difference in the risk of cut-out complication occurrence between center-center, inferior-center, and inferior-posterior quadrants (p=0.49). Mean TAD was less than 25 mm only in the inferior-posterior quadrant. Reductions were all acceptable or good when higher than 90% if the head-neck fixing device was in the inferior quadrants (Figure 3). Demographic characteristics of the patients according to the quadrants are given in Table II.

Table 2. Demographic characteristics of patients according to quadrants
× 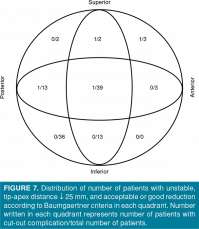 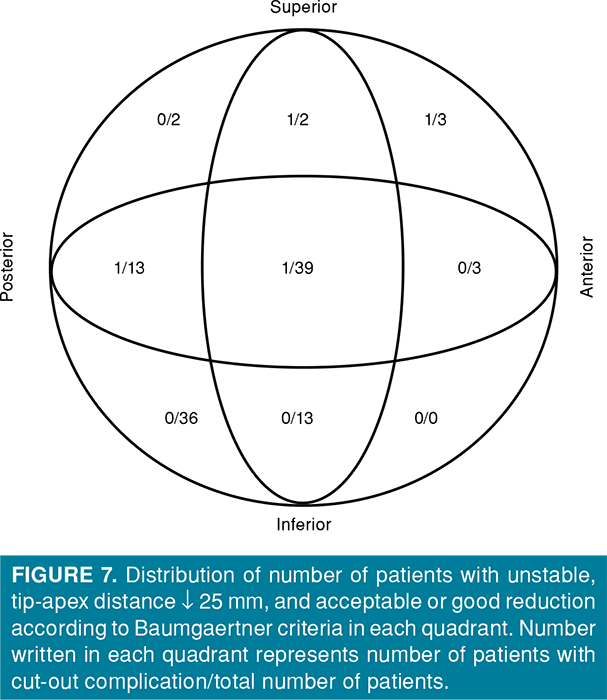 Intertrochanteric fractures are very common in the elderly. The elderly population is increasing steadily, making treatment of these fractures much more important in terms of medical, social, and economical issues. Surgical management of ITF in elderly population is challenging and complications related to surgery can be devastating. Mechanical complications are the most common causes of morbidity after these fractures, with cut-out being the most relevant one.[2] Causes of implant cut-out have been shown to be related to osteoporosis, instability of the fracture, the suboptimal fracture reduction, and the non-ideal femoral head lag screw positioning.[19] Surgical management is usually the first-choice treatment option for elderly patients, but it is not an easy procedure to perform and its complications can be disastrous. The hypothesis of this study was that inferior-posterior quadrant is also as safe as center-center and inferior-center quadrants, which are widely recommended. The results of the study confirmed the hypothesis, and the observed result was that inferior-posterior quadrant was as safe as center-center and inferior-center quadrants.

Cut-out complication rate has been reported up to 6.8% in the literature.[2,20] Historically, this complication rate was much more highly reported which is about 16%.[20] As a result of these high failure rates, the helical blade was designed with the intent of providing stronger fixation by compaction of the cancellous bone as the helical blade is inserted. The blade may also be more effective in supporting torsional load, thereby making it more forgiving to less precise placement in the femoral head. As a result, cut-out rates decreased with probably improved implant designs and surgeons’ awareness of modifiable factors to prevent cut-out and being more careful about this issue. The cut-out complication rate in our study population was 4.8% which is compatible with the current literature.[2]

Lee et al.[27] performed an evaluation of the biomechanical effect of different blade positions on a simulated pertrochanteric fracture by means of a computed tomography-based three-dimensional finite element model. They revealed that inferior and posterior blade positions had the larger area of compressive strain at the fracture surface than other three positions. Generally, normal compressive strain was found to be beneficial for the bone healing process.[28] The results suggested that the inferior position could be an ideal choice, while the posterior position would be acceptable as well. Our results also showed that posteriorly positioning of the blade did not cause any complications. Because the lower extremity tends to externally rotate and head-neck fragment tends to go into varus, positioning the implant inferiorly and posteriorly in the femoral head should be advantageous. This will increase the distance and bone stock that the helical blade will travel to cut-out through the femoral head.

Correct implant choice and correct surgical technique were most important surgeon dependent factors which directly influence the success of surgical treatment of ITF. In our past study, the importance of these factors in preventing mechanical complication such as cut-out were evaluated in detail.[2] In the study, the three most important factors in preventing cut-out complication after multivariate regression analysis were avoiding varus reduction, insertion of the helical blade in a suitable quadrant, and the TAD being equal to or under 25 mm, respectively. However, it should be noted that in that study, center-center and inferior-center placements were accepted as the appropriate quadrants based on the literature information of that period. In this present study, the effects of factors such as TAD and reduction quality on prevention of cut-out complication were not evaluated since the primary aim of the study was evaluating the importance of quadrant placement of the helical blade in prevention of mechanical complications. Because the quadrants were the primary research subject, the patients with an unstable fracture pattern, obtained TAD ≤25 mm, and acceptable or good reductions were included in the final evaluation for standardization and evaluation of the importance of quadrants only.

Although it is well known that center-center and inferior-center positioning of the helical blade is recommended, our study’s results showed that inferior-posterior positioning is also very safe. We recommend to orthopedic surgeons that if the inserted guide wire is in the inferior-posterior quadrant, they should not pull back the wire and continue with this wire. Repeated attempts for the insertion of the guide wire may weaken the cancellous structure of the femoral head and also can cause additional harm due to increased exposure to radiation.

This study has some limitations, first being the retrospective design. Secondly, one of the most significant factors about mechanical failure may be the low quality of the bone and this important factor could not be evaluated in this study. Also, the limited sample size is another limitation.

In conclusion, inferior-posterior placement is as adequate as central-central or inferior-central placement for blade fixation in the surgical treatment of ITF. Properly designed, adequately powered randomized control trials are needed to draw stronger conclusions.

Citation: Karapınar L, Turgut A, Kumbaracı M, Koca A. Evaluation of the quadrants of femoral neck-head in the cephalomedullary fixation of intertrochanteric fractures with a helical blade: Is inferior posterior quadrant also safe? A clinical study. Jt Dis Relat Surg 2021;32(1):93-100.