Inflammatory myofibroblastic tumor (IMT) is a non-neoplastic benign lesion comprising various inflammatory cells, including myofibroblasts and vascular tissues. It is a rare tumor that sometimes shows similar signs and progression as malignant tumors. The anatomical sites of IMTs include the lungs, liver, orbit, skin, mesentery, and maxillary sinus, but they rarely occur in the limb musculoskeletal system. To our knowledge, no case of neurological symptoms caused by the tumor in the triceps brachii muscle has been reported. In this article, we report the case of a 42-year-old male patient with an IMT that grew rapidly in the triceps brachii muscle and consequently caused symptoms of ulnar nerve lesion owing to its increasing size. The patient showed no ulnar nerve lesion symptoms after undergoing wide excision and was diagnosed with anaplastic lymphoma receptor tyrosine kinase- negative IMT.

Inflammatory myofibroblastic tumor (IMT) is a rare benign tumor with an unknown cause and comprised of plasma cells, lymphocytes, histocytes, and vascular tissue. First discovered in 1954 by Umiker and Iverson,[1] Inflammatory myofibroblastic tumors sometimes show similar manifestations as malignant tumors. They usually occur in the lungs and upper airways, and cases in areas such as the head and neck, liver, spleen, pancreas, gastrointestinal tract, posterior peritoneum, heart, kidneys, bladder, uterus, lymph nodes, and skin have also been reported.[2,3] There are some reports of IMT on thigh in musculoskeletal system.[4,5] Histopathologically, they are composed of inflammatory and spindle cells; hence, they are named IMTs. The course of these tumors cannot be accurately predicted. Depending on the research, they are called “inflammatory pseudotumors”, “benign myofibroblastoma” and “inflammatory fibrosarcoma” among other names, making the choice of treatment difficult. Although the exact cause is unknown, the rearrangement of the chromosomal band 2p23, in which the anaplastic lymphoma kinase (ALK) gene is located, is linked to approximately 50% of the tumors. On the basis of recent reports that have classified them as clinically malignant tumors, we recommend that they be treated as true tumors and not pseudotumors.[6] Full recovery has been reported to be attainable via complete resection. Other reports described disease improvement after administration of steroidal or non-steroidal anti-inflammatory medication.[7] Moreover, symptoms subsided after chemotherapy with drugs such as crizotinib and clarithromycin.[8,9] In this article, we report the case of an ALK-negative IMT that showed symptoms of an ulnaris nerve lesion, with the tumor occurring and growing rapidly in the triceps brachii muscle, within the limb musculoskeletal system, before improvement of the symptoms with surgical treatment.[10]

The patient was a 42-year-old male who was admitted for a rapidly growing mass in the left posterior humeral area first palpated one month before admission. The patient reported dropping objects when lifting with the left hand and desensitization on the left side, with motor strength grade IV. He had no specific findings in the past or relevant family history. His laboratory results were normal. On physical examination, the left side showed signs of desensitization, numbness in the ulnar nerve area, hand vibrations during fine motions, and decreased grip strength to motor strength grade IV+. The tumor was firm and non-movable during palpation and showed a positive Tinel sign. On the upper arm magnetic resonance imaging performed in another institution, a well-marginated mass in the area of the ulnar nerve region of the triceps brachii, measuring 2.9¥2.5 cm, was observed. On T2-weighted imaging, intermediate-to-high signal intensity was observed (Figure 1). On T1-weighted imaging, low-to-intermediate signal intensity with a signal somewhat higher than that of the muscle was detected (Figure 2). An operation was performed, and a mass in the triceps muscle parenchyma, clearly isolated from the surrounding muscle parenchyma, was found. No infiltration into the parenchyma of the muscle was observed (Figure 3). As the mass compressed the ulnar nerve, a wide excision was performed with attention to the ulnar nerve. Under light microscopy, myofibroblastic spindle cells, myofibroblasts, collagen, various plasma cells, lymphocytes, and histocytes were observed (Figure 4a). The spindle cells had an abundant cytoplasm and formed loose bundles of fibers in different directions. Small amounts of collagen were deposited in between, and owing to frequent infiltrations, the density of the cells was not particularly high, and no dysplasia of spindle cells was detected (Figure 4b). The immunohistochemical staining for differentiation showed spindle cells reacting negatively to VENTANA ALK immunohistochemistry (D5F3) (F. Hoffmann-La Roche, Basel, Switzerland) (Figure 5a) and positively to smooth muscle actin (SMA) (Figure 5b), S-100 protein (Figure 5c), and cluster of differentiation 34 (Figure 5d). Thus, a diagnosis of ALK-negative IMT was established. Pathological examination revealed that the tumor margin was free of tumor cells. All symptoms of the patient due to ulnar nerve compression were improved. No recurrence was observed in the last 12 months, and the patient’s condition is currently being followed-up with observation. A written informed consent was obtained from the patient.

Figure 2. On T1-weighted imaging, low-to-intermediate signal intensity with a signal somewhat higher than that of muscle was detected.
× 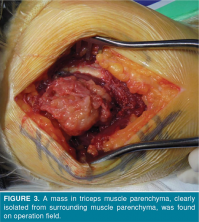 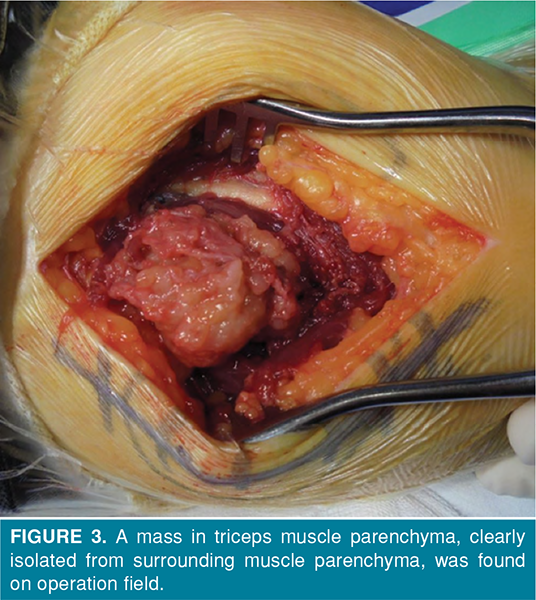 Figure 4. (a) Under light microscopy, myofibroblastic spindle cells, myofibroblasts, collagen, various plasma cells, lymphocytes, and histocytes were observed (H-E ¥40). (b) Spindle cells had an abundant cytoplasm and formed loose bundles of fibers in different directions. Small amounts of collagen were deposited in between, and owing to frequent infiltrations, density of cells was not particularly high, and no dysplasia of spindle cells was detected (H-E ¥400).
× 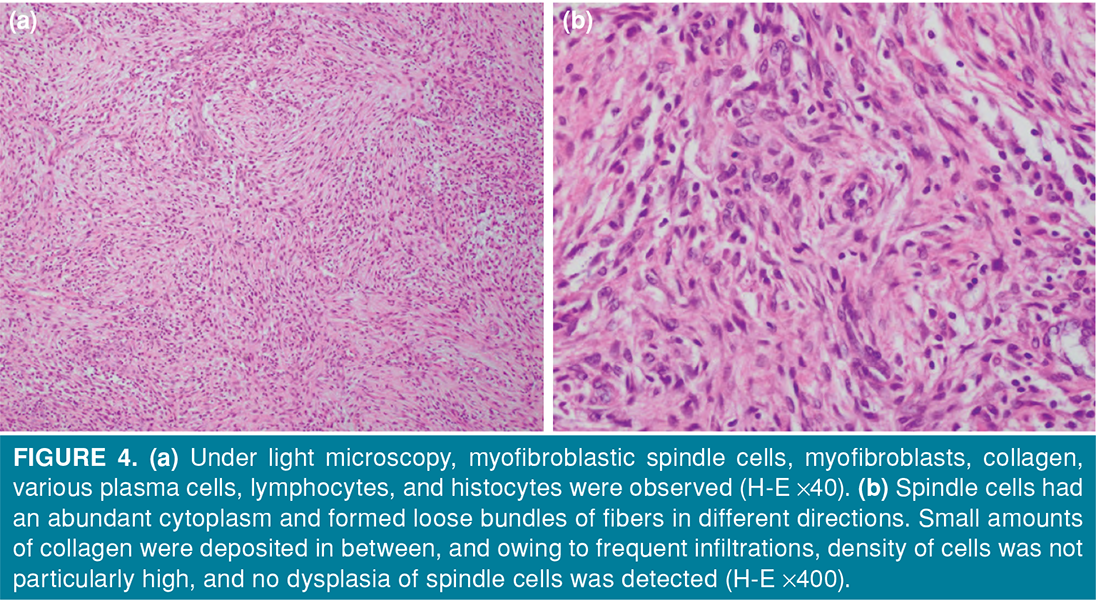 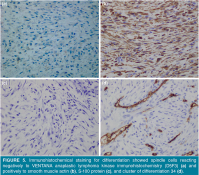 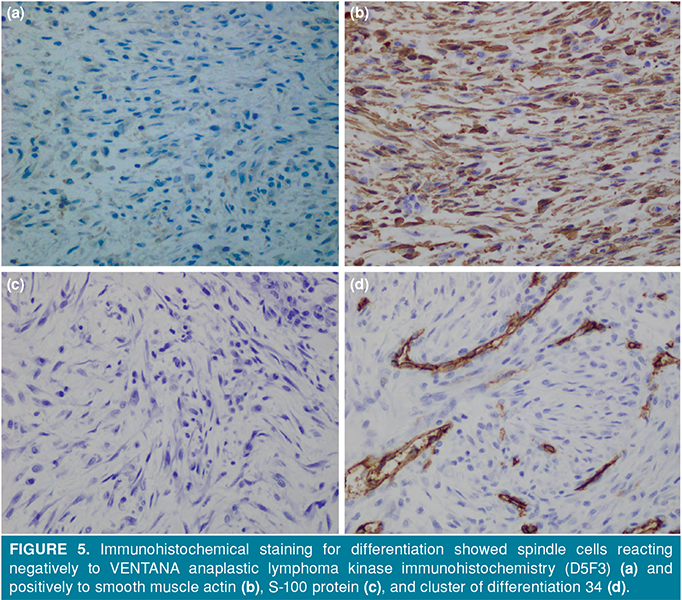 The IMTs are most prevalent in the lungs. As IMTs in the lungs have a mild clinical progression with rare metastases and relapses, they were once called “inflammatory pseudotumors” because they do not have the characteristics of typical tumors.[11,12] In comparison, Inflammatory myofibroblastic tumors in organs outside of the lungs are known to be relatively rare, have poor prognosis, and occur in various organs. The prognosis is known to depend on the area in which the tumor occurs. Coffin et al.[13] reported 84 cases of extrapulmonary IMTs, of which three (3%) occurred in the extremities. Maschiocci et al.[14] reported seven cases of IMTs in the extremities. Inflammatory myofibroblastic tumors in the limbs have only been reported in only one or two cases; hence, little is known about the incidence and prognosis of the tumors.[15,16]

In this tumor, fibroblasts and myofibroblasts forming a cell bundle proliferate and are accompanied by the infiltration of chronic inflammatory cells. Immunohistochemical staining showed myofibroblasts reacting positively to vimentin and SMA in particular, reacting partially positively to desmin and cytokeratin, and expressing the ALK-1 protein (p80). Recent cytogenetic studies of inflammatory myofibroblastoma have revealed that about half of these tumors are caused by a clone rearrangement at the chromosome 2p23 site. The chromosome 2p23 site contains the ALK gene, and if this site is mutated, the IMT expresses ALK. A mutation in ALK was first documented in anaplastic large cell lymphoma (ALCL). ALK-positive ALCLs and IMTs have a better prognosis.[17] These findings suggest that IMT is neoplastic. Reports regarding the disease have described cases in which trauma, surgery, autoimmune reactions, infections, Epstein- Barr virus, and other factors were the causes, but in most cases, the exact cause and etiology were unknown.[13,18] The patient in the present case also had no history that could have caused the disease.

In this case, the borderline was clear, but the characteristics of a histologically low-grade malignant tumor were detected. Furthermore, immunohistochemical staining was positive for SMA but negative for ALK, which led to the diagnosis of ALK-negative IMT. As reported in the literature, inflammatory myoblastoma (inflammatory fibrosarcoma) lacks morphological factors and has a relatively low proliferative index, making it either a tumor with an unpredictable prognosis or a low-grade sarcoma; hence, total tumor resection and long-term regular follow-up are needed.[20,21] In the present case, a wide excision was performed for the IMT, and outpatient follow-up was conducted. No widely accepted theory exists, and research is needed regarding the effects of adjuvant treatment after the surgical resection of IMT. In addition, further research is needed on whether inflammatory fibroblastoma and inflammatory fibrosarcoma are the same or different tumors with some morphological similarities.