The varus ankle deformity can lead to osteoarthritis; therefore, numerous supramalleolar tibia osteotomy techniques are described to correct this deformity. Many of these techniques are more suitable for uniplanar ankle deformity. Particularly, if there are multiplane ankle deformities, the use of the six-axis deformity correction system may be successful in solving the problems which may occur during the correction. In this article, we report two cases of three plane deformities of ankle joint due to trauma sequelae, which were treated with supramalleolar osteotomy using a hexapod fixator which is called the Smart Correction Frame®.

Distal tibial deformities can lead to ankle osteoarthritis. The etiology of this deformity is mostly post-traumatic malunion of the distal tibia which is due to physeal disturbance or pilon fracture occurred during childhood.[1,2] The degenerative changes may often develop asymmetrically in the tibiotalar joint surface, because of distal tibial malalignment which is included by the coronal plane deformities (varus and valgus), the sagittal plane deformities (flexion and extension), and malrotation either in isolation or in combination. Biomechanical cadaver studies have shown that the contact surface area in the ankle joint is reduced up to 40% in the presence of these malalignments.[3]

Supramalleolar osteotomy (SMO) has been frequently applied as a surgical method for varus malalignment of ankle joint.[4-8] In the literature, several osteotomy techniques have been described, each technique having advantages and disadvantages. If the deformity is greater than 10°, close up osteotomy is recommended while surgery may cause shortness of the limb. On the other hand, open up osteotomy technique requires bone grafting and may lead to increased risk of non-union and neurovascular compromise.[6,7] If there is a complex deformity with an oblique plan, limb shortness and rotational component, a desired amount of correction can be achieved by using an external fixator without stretching the neurovascular tissue and shortening. The hexapod fixator system is built upon traditional circular fixator method and principle of distraction osteogenesis.[9] It uses computer software programs to allow to precisely correct all plane deformities.[10] In this article, we report two cases of three planar deformities of ankle joint due to trauma sequelae, which were treated with SMO using a hexapod fixator called the Smart Correction Frame® (İlerimed Sağlık Ürünleri Tic. A.Ş., Istanbul, Turkey).

Case 1- A 15-year-old female patient presented to our clinic in July 2016 with right ankle pain and walking disability. The patient had a history of ankle trauma in her childhood treated with a plaster cast. Her family stated that her ankle joint had a normal function and they did not see any deformities in her ankle before the trauma. She was able to perform plantigrade bearing but had some pain during walking on uneven ground. Moderate varus deformity, 15° limitation of dorsiflexion in ankle, and also decreased subtalar foot eversion were detected during physical examination. Standing bilateral, full-length, weight-bearing radiographs were obtained to evaluate potential limb length discrepancies and deformities of the hip, knee, femur, and foot. Radiological examination revealed that the right tibia was 15 mm smaller than left and both femurs were equal. Medial proximal tibial angle (MPTA) and lateral distal tibial angle (LDTA) measurements were made by taking the midline of the tibia collinearly. In the radiographs, no diaphyseal deformities were detected; on the other hand, a deformity was found in the joint line. Her ankle varus deformity was moderate with the lateral distal femoral angle of 105° varus angle. Also, sagittal plane deformity was detected. Her ankle anterior distal tibial angle (ADTA) was 70° (Figure 1). A written informed consent was obtained from the legal guardian of the patient. 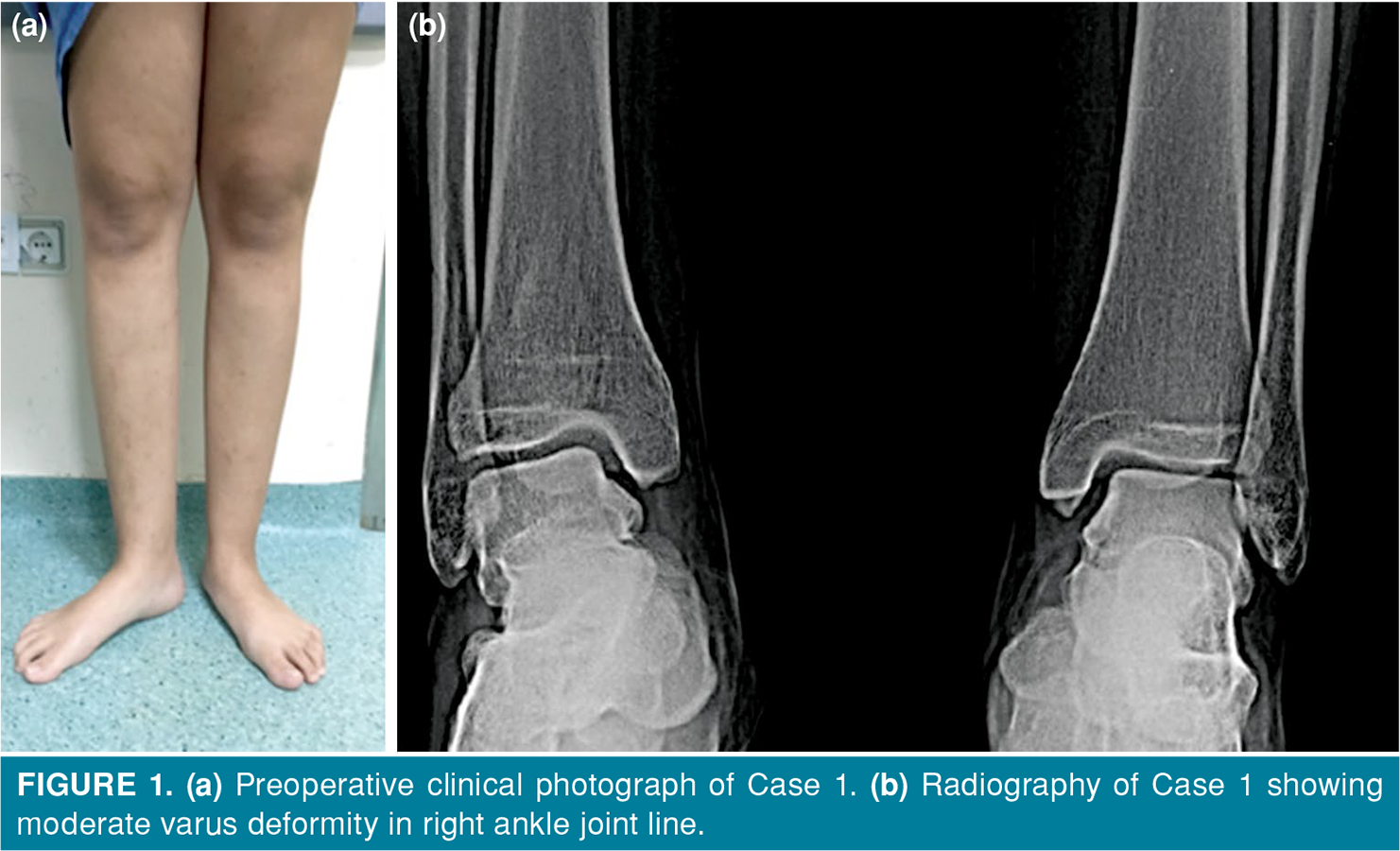 Based on the medical history and radiographs of the patient, we concluded that the right ankle varus deformity was attributable to the physeal disturbance in childhood. The increased varus deformity may have caused overload into the lateral aspect of the ankle joint, leading to pain. First, the patient underwent conservative treatment with a foot orthosis and physical therapy for three months. After this period, patient’s complaints did not change and realignment ankle surgery was planned. For surgery, multiple corrections with external fixator were planned because of multiplane deformities and length discrepancy.

First, in order to determine the deformity of the ankle, proximal and distal mechanical axes were identified.[11] The center of rotation and angulation (CORA) of the deformity was close to the ankle joint. We prepared a two-ring fixator system in a structure that mimics the existing varus and recurvatum deformities in the patient. Each ring was applied to tibia with two half-pins and two tensioned wires with the help of the fluoroscopy. Then, the distal fibula was fixed to the distal frame with one of the tensioned wires. Osteotomies were performed: First, multiple drill hole osteotomy technique was applied on the tibia metaphysis and an anterior one of the strut removed. Then, the second osteotomy was performed with the same technique on the fibula at a level below tibial osteotomy. In each osteotomy step, osteotomy lines were checked by distraction to see if they were complete or not. In order to correct the deformity, we used simple rules in the computer software. The first rule is that when the frame is applied to the tibia, the first and second struts should be put at anterior to the tibia. The second rule is that when postoperative radiological examinations are performed, the rings should be in contact with the X-ray cassette and the right anteroposterior and lateral radiographs should be taken (Figure 2). After radiologic examinations and uploading of strut information to the computer, we obtained a list of required corrections using a special computer program (Smart Correction, İlerimed Sağlık Ürünleri Tic. A.Ş., Istanbul, Turkey). We gradually finished the correction of the varus, recurvatum, and external rotation deformities of the patient's ankle within 10 days. The patient was mobilized by giving partial load with the walker for the first two weeks postoperatively and permitted full weight bearing in the following days. The patient was allowed to actively act on the ankle and subtalar joints. The external fixator was removed six months after the osseous union. At the latest follow-up at 14 months postoperatively, she could walk 2 km without any pain, her ankle American Orthopaedic Foot & Ankle Society (AOFAS) score was 99 and her ankle dorsiflexion and subtalar eversion were improved. Postoperative distal tibial joint orientation angle was significantly changed. LDTA was 89° and ADTA was 80° (Figure 3). No complications were seen during treatment except a superficial pin-site infection which was managed with local pin care and oral antibiotics.

Figure 2. (a) Postoperative anteroposterior view of right ankle of case 1. (b) Radiography of Case 1 showing bony union after six months.
× 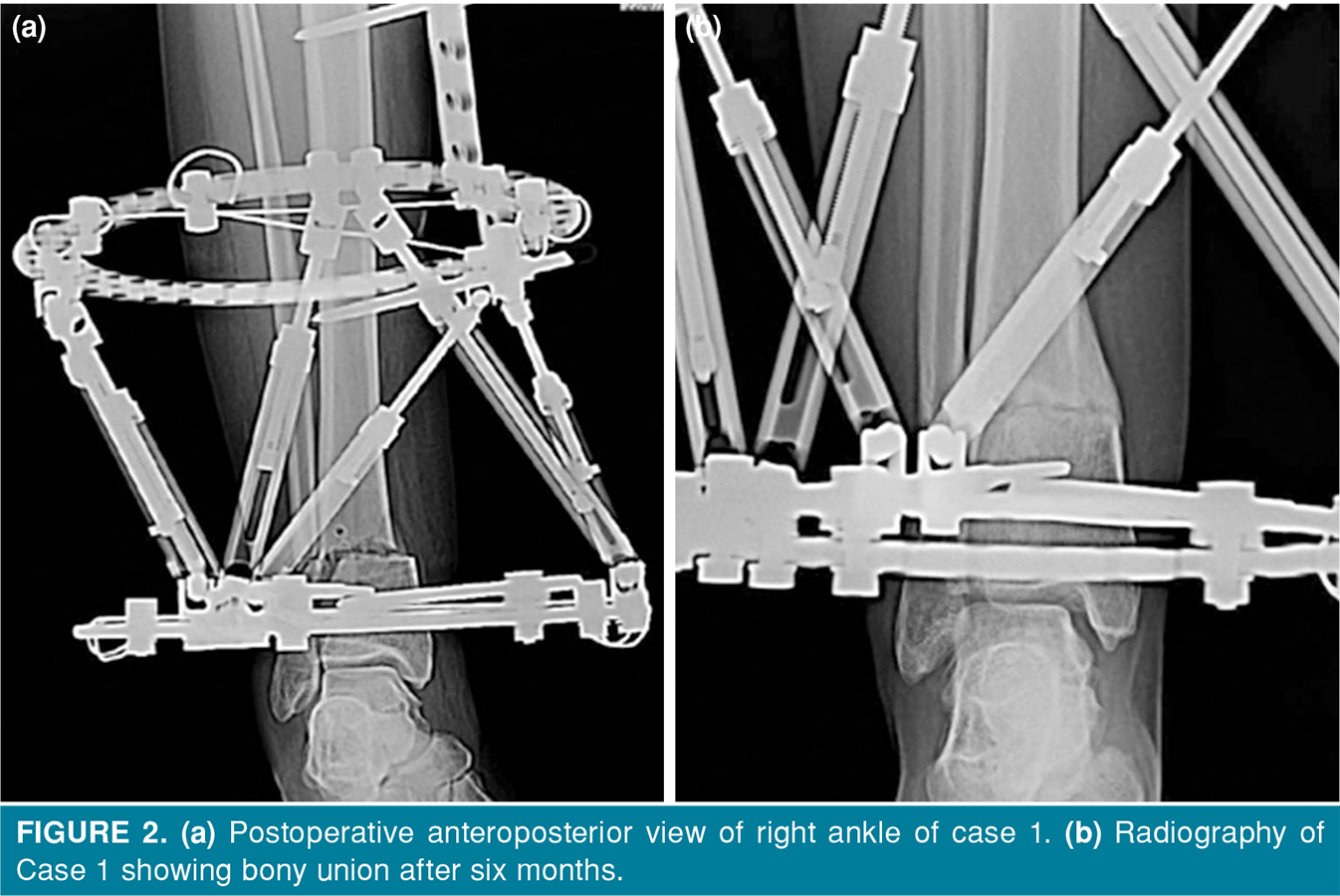 Figure 3. (a) Anteroposterior and (b) lateral radiographies of Case 1 at latest follow-up at 14 months postoperatively.
× 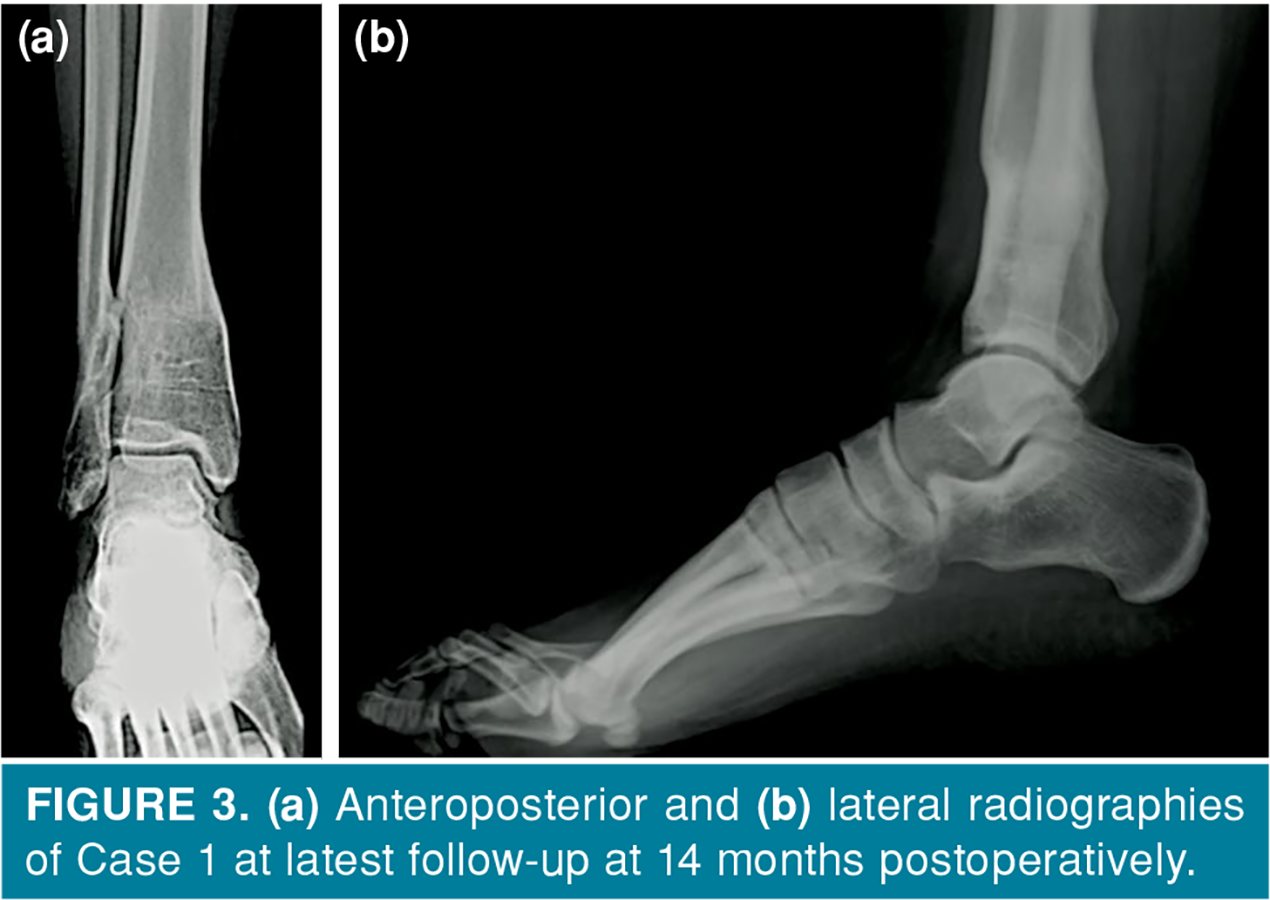 Case 2- A 37-year-old male patient presented to our clinic in July 2017 with reduced walking distance and complaint of left ankle pain. The patient had a history of falling trauma about five years ago. He had been operated twice in another hospital before he came to us. Preoperative clinical assessment showed moderate varus deformity, 5° dorsiflexion in the ankle, and decreased subtalar eversion. Patient’s right foot had 10° more external rotation relative to the left side. In the radiological evaluation, similar to the previous case, varus ankle deformity was found. Measured ankle deformity LDTA and ADTA values were 105° and 70°, respectively (Figure 4). For the surgical treatment, we planned to correct the deformity in this patient using the technique we described for the first patient. The fixator was removed seven months after the ankle deformity was corrected gradually. At the latest follow-up six months postoperatively, he could walk 500 m without any pain, his ankle AOFAS score was 99, and his ankle dorsiflexion and subtalar eversion were improved. Postoperative distal tibial joint orientation angle was significantly changed. Lateral distal tibial angle was 89° and ADTA was 80° (Figure 5). We observed only one complication of deep pin-site infection which was managed with curettage during fixator removal. A written informed consent was obtained from the patient.

Figure 4. Preoperative (a) anteroposterior and (b,c) lateral radiographies of Case 2.
× 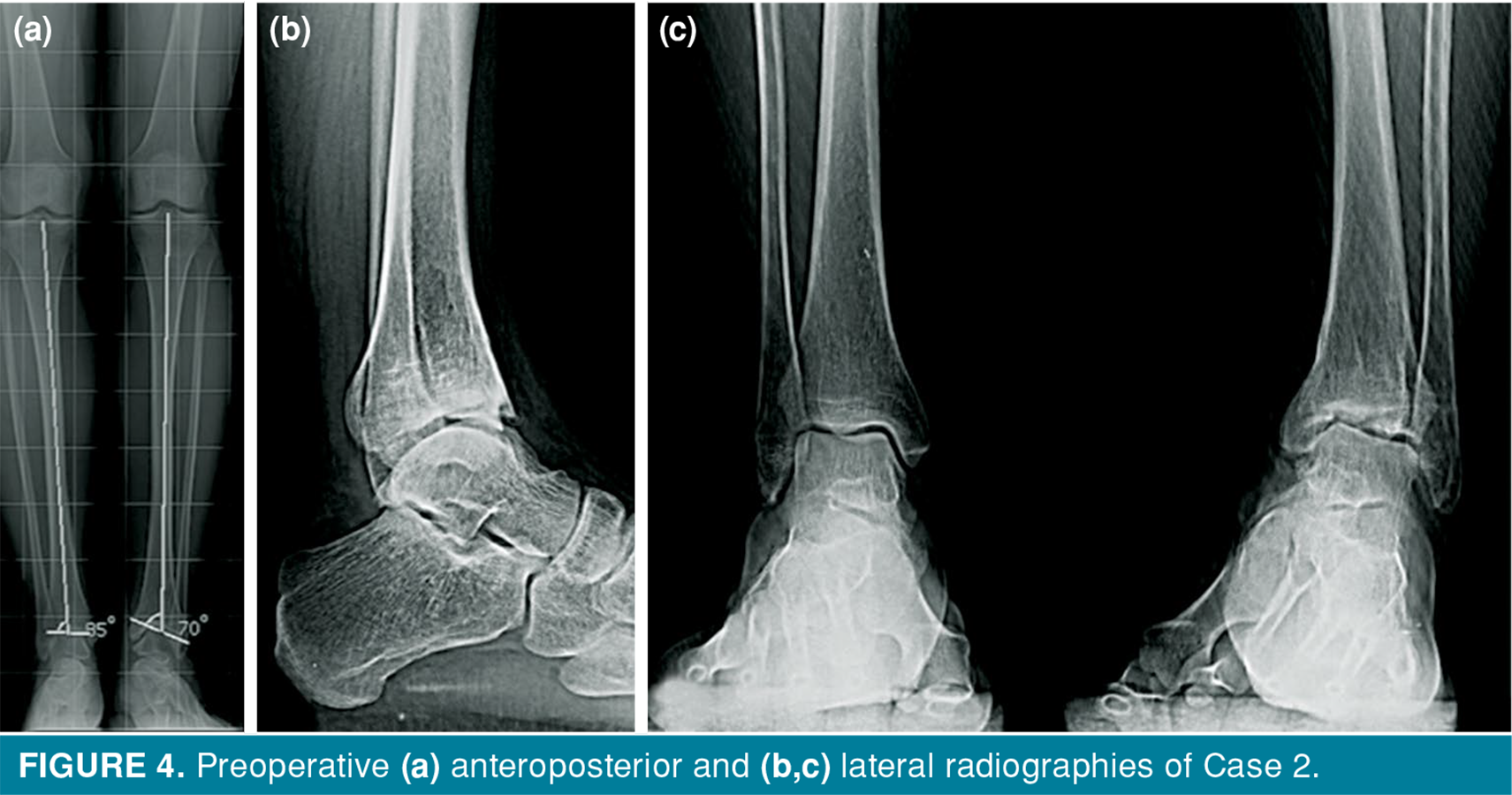 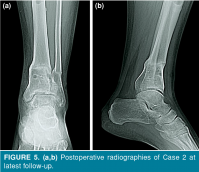 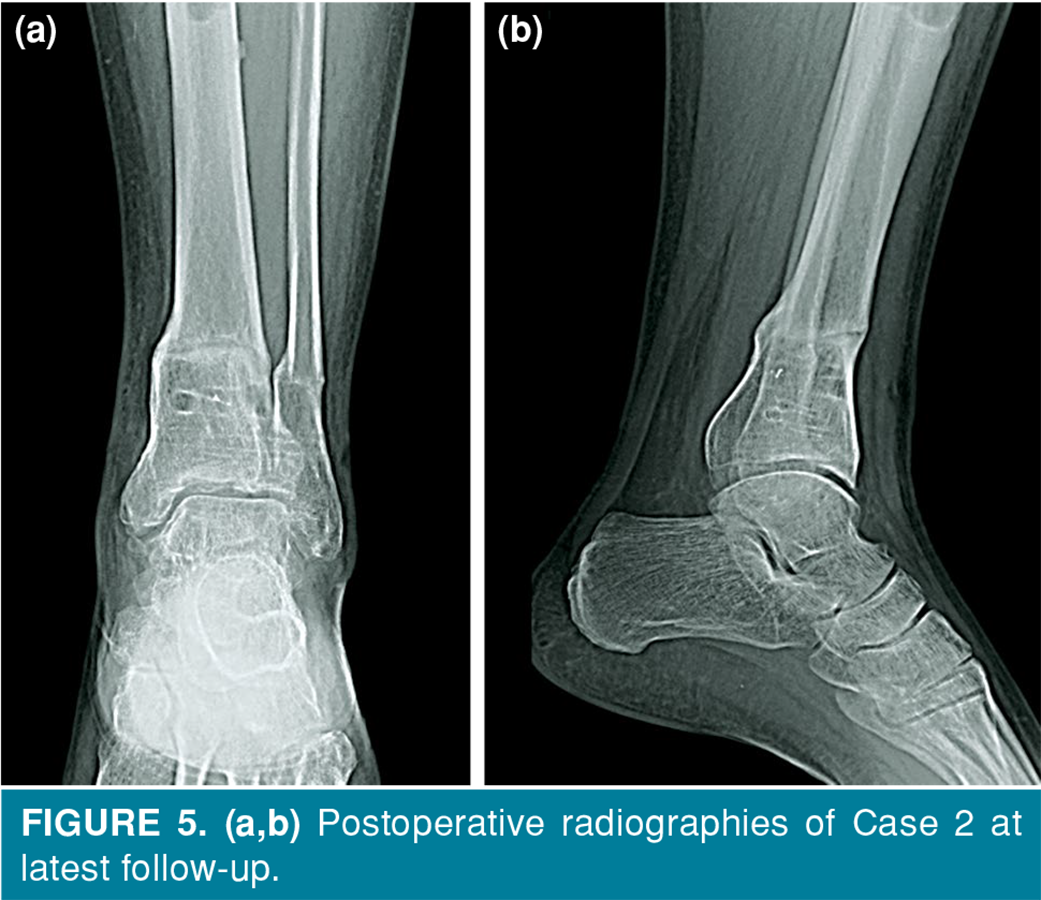 Supramalleolar osteotomy is an effective treatment method for varus deformity of an ankle joint. There have been numerous clinical studies on how angular deformity of the ankle joint should be corrected.[4,6] Successful results were obtained when the deformity was simple, either with open or closed wedge osteotomy.[6,12,13] However, if the deformity is very complex, postoperative complications may be seen such as non-union, wound dehiscence or insufficient correction. The use of the traditional Ilizarov method in the correction of deformities has been previously reported in many studies.[11,12] The Ilizarov device allows early weight bearing, perfectly controls the correction procedure with the aid of hinges placed on the center of angulation, enables gradual correction, and provides a stable osteosynthesis. However, during the correction period, complicated deformities require the hinges to be changed or a new frame to be formed, and this procedure is very time consuming and may also reduce patient compliance.[5,14] Hexapod fixator system (Smart Correction Frame®, İlerimed Sağlık Ürünleri Tic. A.Ş., Istanbul, Turkey) uses circular external fixation with six-axis deformity correction which was created by computer software. Color-coded struts and simple adjustment schedules allow the patient to easily apply correction procedure. We chose this six-axis fixator device because it is very easy to perform and re-adjust compared to a similar system. It has been reported in the literature that new systems give more successful results especially in complex lower extremity deformities.

Even though the CORA is at the level of the joint line, the SMO is performed close to the ankle joint level.[15] Because the CORA and osteotomy levels are not in the same plane, final correction may result in translation and angulation deformity. In these cases, stabilization of bone fragments with external fixator is more effective than internal fixation methods. With our patients, the predicted translation was obtained when correcting the deformity of the lower end of the tibia and no stability or neurovascular problem was observed due to the gradual correction steps. Some authors recommended that bone fixation should go below the joint level to ensure adequate stability.[8,13] In our practice, the frame form that we applied was able to maintain adequate stability until bone union was achieved. In this manner, it was possible to maintain and keep up the joint movements of the ankle and subtalar joints.

Varus deformities of the ankle joint are compensated by the subtalar joint. The normal subtalar range of motion is 30° inversion and 15° eversion.[11] Therefore, the amount of deformity that can be compensated by the hind-foot is 15° ankle varus deformity. The most important and clear finding that we obtained in the physical examination of our patients was the limited movement of the subtalar joint. Even though there is no rigid deformity in the joints, we think that long-distance post-walking foot pain in patients is due to the inadequate compensation mechanism. It is an advantage of this system that patients can get a weight bearing during the postoperative period and perform joint exercises in the early period, whereas in some studies, immobilization with cast is recommended for up to six weeks after internal fixation.[6,7] In recent follow-ups, it was determined that patients' ankle and subtalar joint movements increased significantly.

The most important disadvantage of the fixator system is the daily pin-site cleaning. However, we had only one deep pin-site infection in both of our patients.

In conclusion, both radiological and clinical improvements were obtained in the existing deformities of our cases of complicated varus ankle deformities due to trauma. According to our findings, hexapod type fixators can be used for complex ankle deformities without shortness, wound problems, and joint stiffness. Furthermore, intended distal tibia alignment angles are obtained safely.

The authors would like to express sincere thanks to the patients who stood tough and trusted us during the entire management period.