Tumorous conditions of the pediatric hand and wrist: Ten-year experience of a single center

Objectives: This study aims to evaluate the distribution and prevalence of pediatric hand tumors and tumor-like lesions according to age and gender.

Patients and methods: We retrospectively examined the details of hospital records of 646 patients who were operated for hand mass between January 2009 and January 2019 and whose pathological diagnosis was established in the same hospital. A total of 54 patients (18 males, 36 females; mean age 12.07 years; range, 3 month to 17 years) under 18 years of age who had been operated for the wrist or hand mass were included in the study.

Results: Out of 54 tumors, 53 were benign (98%) and one was malignant (2%). There were 42 soft tissue tumors (78%) and 12 bone tumors (22%). The most common soft tissue mass was ganglion cyst (n=12). Six out of 12 ganglion cysts were on the dorsal side of hand or wrist and six were on the volar side. The distribution of the tumors according to gender was not statistically significant (p=0.73). We had two recurrences: one patient with giant cell tumor of the tendon sheath and one with palmar fibromatosis.

Conclusion: Pediatric hand/wrist masses are mostly benign tumorous conditions. The location of the pathologies may be different from the adults. Diagnosis of the tumor should be established carefully clinically and radiologically while malignant tumors should be kept in mind by both pediatricians and orthopedic surgeons.

Hand tumors are uncommon and the malignant ones are less commonly seen pathologies.[1] Pediatric hand tumors are particularly rare and one of the less investigated topics of musculoskeletal tumors.

The pediatric population or families mostly concern about the growing mass of the hand and this is the most common complaint for applying to the hospital. General examination of the pediatric population is mostly challenging, sensitive and different from the adults. Also, the distribution of the ganglion cyst on the hand may differ from the adults.[4,5]

Pediatric hands may also have both benign and malignant tumor conditions. However, malignant tumors are rarely seen.[6] Having the knowledge of the distribution of the tumors on each part of the body and also of the hand of the pediatric population makes the evaluation and the diagnosis of the children with a hand mass easier. In this study, we aimed to evaluate the distribution and prevalence of pediatric hand tumors and tumor-like lesions according to age and gender.

In this study, we retrospectively examined the details of hospital records of 646 patients who were operated for hand mass in Akdeniz University Faculty of Medicine, Department of Orthopedics between January 2009 and January 2019 and had the pathological diagnosis in the same hospital. A total of 54 patients (18 males, 36 females; mean age 12.07 years; range, 3 month to 17 years) under 18 years of age at the operation time and who could be followed- up for a minimum of one year were included in the study.

The hospital’s archiving system (Mia-Med version 1.0.1.2808, Mia Technology, Ankara, Turkey) was used to obtain the demographic information, pathology reports, details of surgery, pre- and intraoperative diagnosis, and follow-up examination reports. The study protocol was approved by the Akdeniz University, Faculty of Medicine Ethics Committee (Date: 04 May 2015, Decision Number: 239). The study was conducted in accordance with the principles of the Declaration of Helsinki.

Table 1. Demographic data of patients for each pathological diagnosis
×

The most common soft tissue mass was ganglion cyst (n=12, 6 males and 6 females). Six out of 12 were on the dorsal side of the hand or wrist and six were on the volar side. The second common reason for the hand mass was the giant cell tumor of the tendon sheath (GCTTS) (n=9). In eight out of nine patients with GCTTS, the tumor was on the volar side and only in one patient the GCTTS was on the dorsal side (Figure 1). If we accept the ganglion cyst as a tumor- like lesion, GCTTS was the most common soft tissue tumor in our study. The third common reason for the hand mass was the enchondroma (n=8). Enchondroma was the most commonly diagnosed bone tumor in our case series.

Figure 1. Distribution of the most common soft tissue tumorous conditions of hand on a 14-year-old male patient. (a) Dorsal side. (b) Volar side. Elliptical-shaped line shows ganglion cyst and star-shaped line shows giant cell tumor of tendon sheath.
× 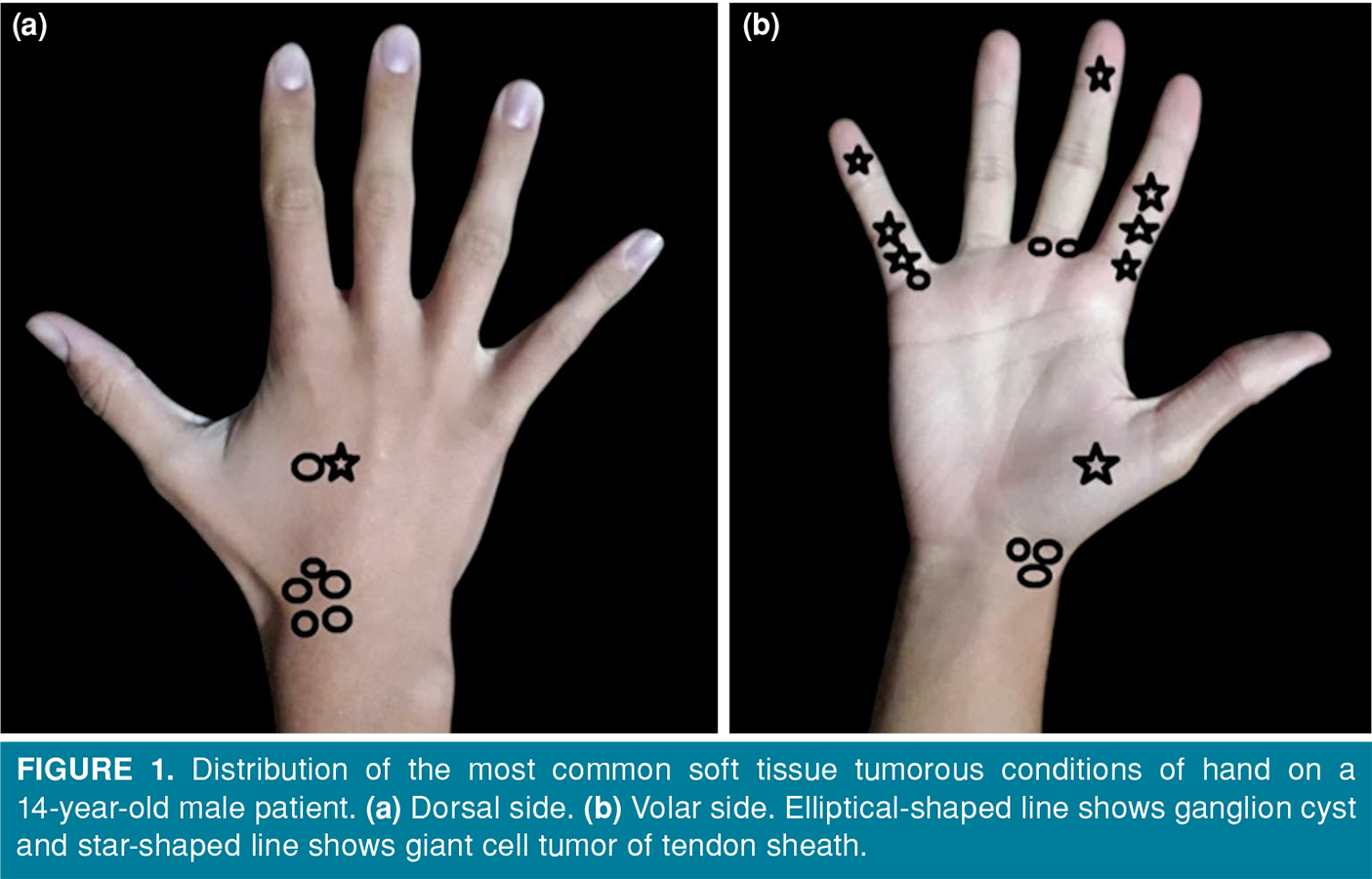 Intraoperative photos of two cases are shown in Figures 2 and 3. We had recurrence in two cases: one recurrence in a patient with palmar fibromatosis and one GCCTS. 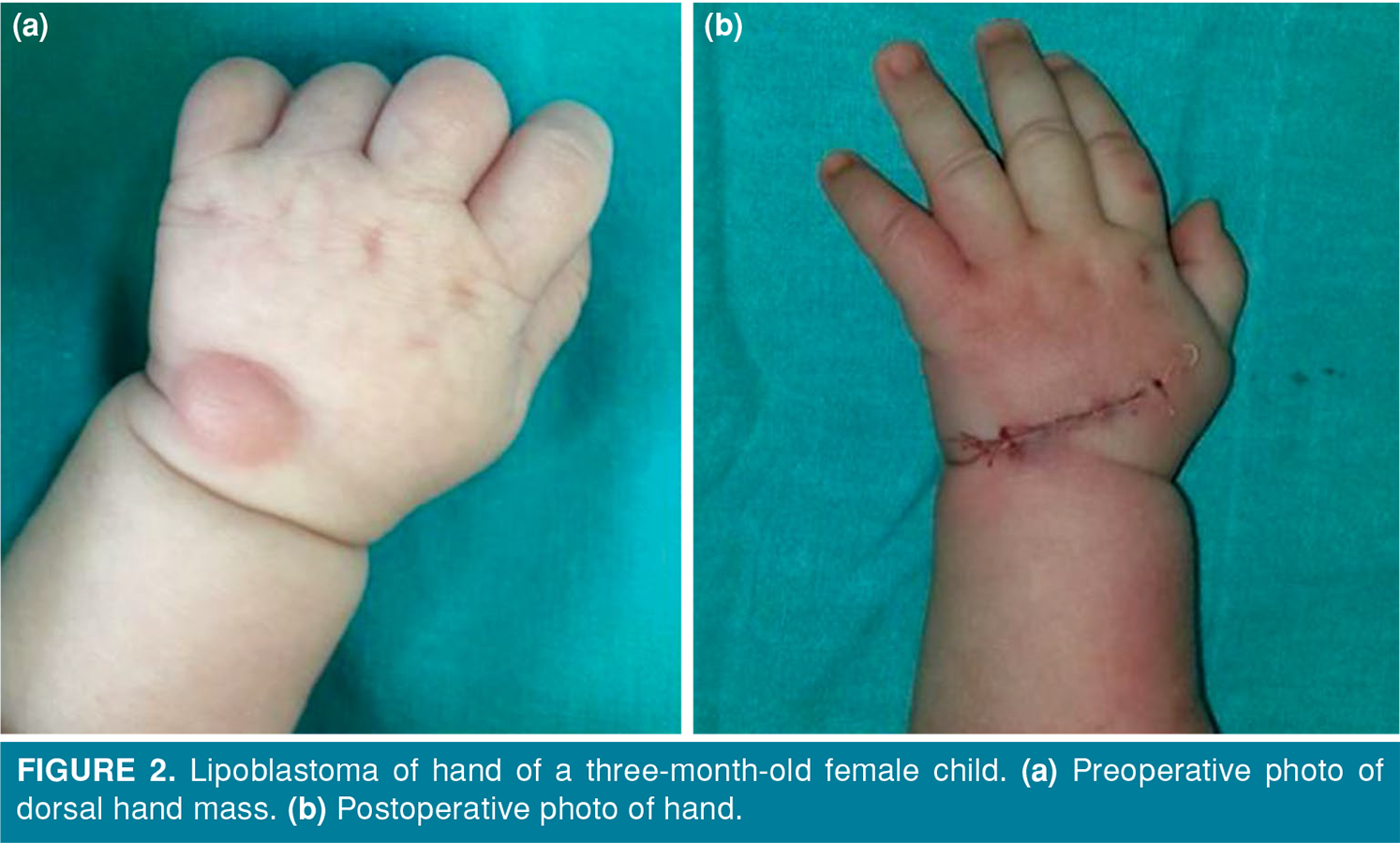 Figure 3. Giant cell tumor of tendon sheath (GCTTS) of a 12-year-old male patient. (a) Intraoperative exploration photo of GCTTS. (b) GCTTS is seen on tip of forceps.
× 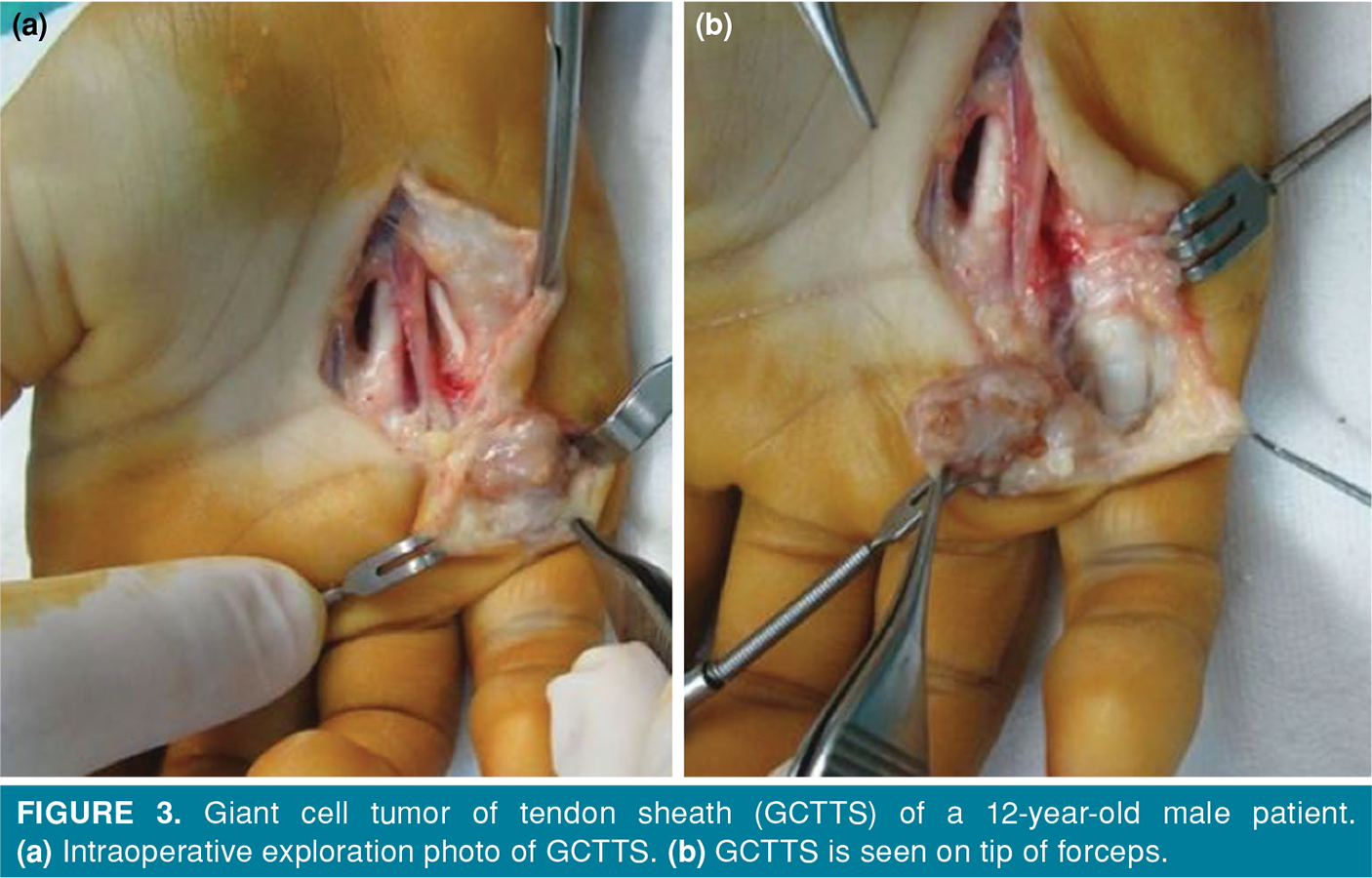 A comparison of the distribution of the tumors according to gender revealed no statistically significant result (p=0.73) (Table II).

Table 2. Distribution of tumor types according to gender
×

As seen in our study, tumor and tumor-like lesions of the hands are mostly benign pathologies. Similar results were reported for the adults in some studies.[7,8] There are some different findings from the literature in the current study. One interesting result was the non-dominance of the gender for the ganglion cyst. The prevalence of the ganglion cyst was reported higher in the female gender.[3,4] However, the rate was found to be equal for each gender (50%-50%) in our study. To our knowledge, there is no study reporting the Turkish pediatric population’s hand tumor distribution to compare our results. We think one reason for this finding was the ethnic and traditional differences of the Turkish population. Moreover, we are aware that determining the real incidence of ganglion cysts is difficult because of the low rate of need for consulting a doctor. This type of cysts is usually asymptomatic and does not cause functional problems.[4]

Giant cell tumor of the tendon sheath is the second common reason for the hand and wrist mass in the pediatric population. This is the most common tumor that we recorded in our study. Although GCTTS is commonly seen in adults, it is also the second most common soft tissue tumor-like lesion in pediatric hand according to our study.[3,10,11] The recurrence rate for the GCTTS is 1/9 (11%) in our series. This rate is similar to the literature.[12,13] We had recurrence in a 13-year-old female patient. The GCTTS was multilobulated and multifocal in that patient and we think that the reason for recurrence was the inadequate resection. Another recurrence was observed in a nine-year-old male patient with palmar fibromatosis. The rate of recurrence was 100% for palmar fibromatosis in the present study; however, we believe that it would not be suitable to compare this rate with the literature since palmar fibromatosis of the pediatric hand is reported as case reports in the literature.[14]

Enchondromas are one of the benign cartilaginous tumors that have malign transformation potential.[15,16] In our case series, we had eight patients with enchondroma. Curettage and bone grafting were performed for all patients with enchondroma. None of them had malignant transformation to chondrosarcoma and none of them had any recurrence while care should be taken in the follow-up period.

Epidermoid cyst is one of the most common tumor conditions of the hand and wrist. It is mostly detected at the age of 30-40 years. Interestingly, we have observed an epidermoid cyst in only one patient.[3,17,18] Lipoma is another common soft tissue tumor of the hand. We recorded no lipoma case. We only included patients with a pathological diagnosis established by excisional biopsy. Lipoma and epidermoid cyst are benign tumors and may result in no complaint. The low rate of these pathological diagnoses would be related to patient preference about the surgical excision.[18]

Hemangiomas and glomus tumors are painful tumors of the hand. We had no glomus tumor in our case series while we had six hemangiomas. Hemangiomas grow after birth and mostly cause symptoms in childhood.[18] Surgical excision was performed for the hemangiomas in our series.

Sarcomas are rare malignant tumors of the hand and forearm.[18] In our study, 98% of the hand or wrist masses were pathologically diagnosed as benign tumors. Only synovial sarcoma was recorded in a 14-year-old female patient as the malignant tumor. We applied a wide margin excision for the tumor. She received adjuvant chemotherapy and radiation. The metastatic tumors of the hand are also rare but case reports were listed in the literature.[19] We had no metastatic case.

In Turkey, families usually take their children to pediatricians even they have a mass in their hand or wrist. This situation makes the pediatric specialist more responsible for the procedure. He or she has to know and inform the family about the type of the hand/wrist mass and tell the family in which situation they should go to an orthopedic surgeon.

In conclusion, pediatric hand/wrist masses are mostly benign tumorous conditions. The location of the pathologies may be different from the adults. Diagnosis of the tumor should be established carefully clinically and radiologically and malignant tumors should be kept in mind by both pediatricians and orthopedic surgeons.