Conclusion: Application of cement combined with DBM procedure is an effective, alternative, and biological treatment in bone tumors that provides immediate stability and stimulates new bone formation on the cortical window.

There is no standard procedure for the treatment of benign bone tumors. The bone defect following the curettage of the bone tumor can be filled with autologous bone marrow, polymethylmethacrylate cement, allograft, tricalcium phosphate, and demineralized bone matrix (DBM). All these procedures have their own advantages and disadvantages. Autografting is the gold standard in tumor surgery; nevertheless, its disadvantages including limited access, cosmetic problems, and donor site morbidity make the alternative treatment modalities as viable options. Resorption of graft material and transmission of disease are associated risks of allograft use.[1] Polymethylmethacrylate cement is non-biological and its Young’s modulus of elasticity is lower than cortical bone, responds to compression-distraction forces differently compared with cortical bone, and has poor tensile and shear strength.[2] Demineralized bone matrix is expensive and osteoinductive without structural support.[3]

Thirty-two benign bone tumor patients (15 males, 17 females; median age 38 years; range, 12 to 68 years), who underwent cement combined DBM procedure at Bezmialem Vakıf University School of Medicine between February 2010 and December 2014 and were followed up for a minimum of one year, were evaluated retrospectively. Patients with axial (n=2), pelvic bone tumors (n=3), metastatic giant cell bone tumor (n=2), or those who underwent adjuvant radiotherapy or chemotherapy (n=1) or were followed up for less than one year (n=11) were excluded. The study protocol was approved by the Bezmialem Vakıf University School of Medicine Ethics Committee. A written informed consent was obtained from each patient. The study was conducted in accordance with the principles of the Declaration of Helsinki.

All patients were examined through direct X-ray, computed tomography (CT), and magnetic resonance imaging (MRI) for preoperative surgical planning. All operations were performed by the same experienced tumor surgeon and the operation procedure was similar. A tourniquet was used in all patients if tumor localization allowed. Generally, an adequate longitudinal incision was performed over the lesion to dominate the whole lesion. An oval cortical window was created with a drill and osteotome. The cortical window and affected soft tissue on the cortex were removed. After an extensive curettage was performed, mechanical cleaning was carried out with a high- speed burr. If necessary, the cavity was rinsed with phenol and ethanol solution while preserving the surrounding soft tissue. Then, antibiotic-free bone cement was prepared and the cavity was filled with high viscosity bone cement (Biomet Bone Cement R, Biomet Orthopedics GmbH, Ried, Switzerland). Grooves were created with a scalpel on the surface of cement to increase the cement-graft retention. Thereafter, when the cement was solidified, putty form of DBM (Grafton, Osteotech Inc., Eatontown, NJ, USA) was applied with at least one standard cortical thickness on the cement (Figure 1). Prophylactic osteosynthesis was performed in patients with possible pathological fracture.

Tumor volume [volume= (4/3)π(D1/2)(D2/2)(D3/2)] was calculated according to the direct preoperative X-rays and CT sections.[4] Patients were routinely controlled with direct radiography every three months for the first year. To assess tumor recurrence and bone regeneration on the cortical window, all patients were evaluated with CT scans in the first postoperative year (Figure 2). As there is no defined classification method in the literature, we used our own methodology to classify the amount of new bone formation on the cortical window regarding CT scans (Table I). Every measurement on radiological images was performed by a radiologist three times to reduce the dating error. Musculoskeletal Tumor Society (MSTS) functional scores of all patients were performed in the first postoperative year.[5]

Figure 3. Categorization of patients according to grading system.
× 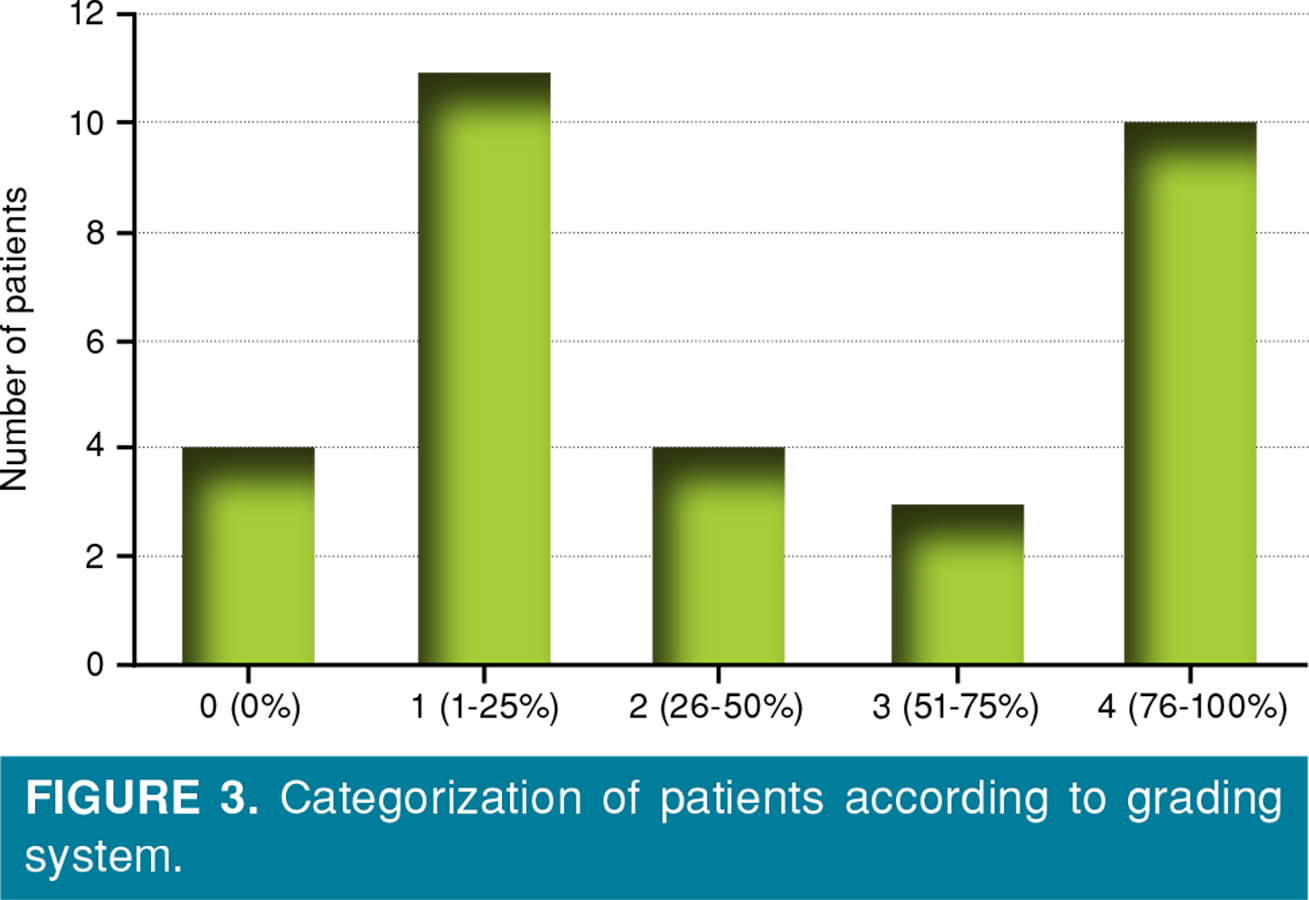 Local recurrence happened only in one patient, who had giant cell bone tumor. After aggressive curettage, revision surgery was performed by applying DBM over the cement, as the same procedure. None of the patients had any other complications such as infection, pathological fracture, seroma or hematoma.

The usage of cement in bone tumors provides immediate structural support to bone and absorbing stress. Thermal cytotoxic effect of the cement reduces the local recurrence.[6] Cement reconstruction is a successful method in bone tumors because it provides mechanical support and reduces the possibility of pathological fracture. Therefore, it is more preferable than graft in the load bearing, high stress regions, and large defects.[7] Its simple reconstruction procedure, satisfactory functional and radiological results as well as low-cost increase the range of usage.[8]

Demineralized bone matrix is an alternative allograft product for filling bone defects, which provides bone regeneration mainly through osteoconduction and partly osteoinduction.[9] In recent years, the treatment of benign bone tumors with DBM has become popular in orthopedic and maxillofacial surgery due to its high recovery and low complication rates.[10,11] Therefore, it has increased its combined use of other graft materials. There are two level 3[12,13] and three level 4 studies,[14-16] which show that combined DBM and autologous bone marrow use is effective in the treatment of active bone cysts. Successful results have been also shown with the use of DBM in combination with steroids.[17] Teng et al.[18] reported that the combined use of allograft and cement in giant-cell bone tumors around the knee has led to less mechanical failure and they suggest this method as an optimal reconstruction strategy. In the literature review, we could not find any data about the combined use of DBM and cement as well as the effect of new bone formation in cortical window on functional scores.[19] By the cement combined DBM treatment, we provide initial mechanical strength by taking advantage of the load-bearing effect of the cement which makes early weight bearing possible. Moreover, we optimize the cost effectivity and reduce the possibility of graft resorption and fracture by using less DBM. In addition, we also increase cortical bone formation that carries the load on removed cortical window. In our study, we found that 3/32 patients had more than 50% new bone formation on the cortical window and the cortical window of 10/32 patients were almost completely healed with new bone in the first year CT scans. Although the efficacy of DBM to produce live bone is best demonstrated only by histological examination, the thin rim layer, which appears in tomography and direct graphs, shows an increased activity in the scintigraphy. The radiological and histological results are parallel to each other in experimental studies.[20] We did not find any correlation between the functional scores and new bone formation.

It is known that the effectivity of different brands of DBMs varies from each other.[21] The reasons of different results have been shown such as the sterilization process, washing procedure, varying from donor to donor resulting in differences between products, inherent BMP types, and different amounts of graft.[22,23] The fact that the US Food and Drug Administration (FDA) is not performing standard controls for DBMs was shown to be not a surprise in the diversity of DBM results. We think that we have standardized and optimized our treatment, because we used same brand, which has shown superiority, and same form DBM.[21]

Traditionally, aging decreases mesenchymal cell differentiation, collagen activity, bone metabolism, and recipient aging declines the effect of allografts.[23] Also, there is an increased risk of non-union with elder population in DBM-treated patients with lumbar fusion.[24] We found a negative correlation between aging and new bone formation on cortical window consistent with the literature.

This study has some limitations. First, removal of different types of tumors would affect recurrence, time to return to work, and new bone formation on the cortical window. Second, the distribution of the load on the lower and upper extremities could not be the same; therefore, this may have affected the return to work, new bone formation on the cortical window, and functional scores.