Objectives: This study aims to evaluate the efficacy of proximal humerus plate in the fixation of subtrochanteric femoral shortening osteotomy (SFSO) during total hip arthroplasty.

Patients and methods: Thirty female patients (mean age 49.8 years; range, 22 to 68 years) who underwent hip arthroplasty with a SFSO and fixed with a proximal humerus plate between January 2014 and June 2018 were evaluated retrospectively. Rate of fracture healing, the number of fixed cortices at both sides of the osteotomy, and complications were documented.

Conclusion: In conclusion, the use of a proximal humerus plate for the fixation of SFSO can be an alternative procedure for achieving adequate rotational stability until a solid union.

The number of patients undergoing total hip arthroplasty is rising.[1] Developmental dysplasia of the hip (DDH) is a frequent diagnosis for total hip arthroplasty and a subtrochanteric femoral shortening osteotomy (SFSO) is often required for the Crowe type IV patients.[2,3] After the SFSO, fixation may be necessary to obtain the rotational stability.[4] However, the femoral stem reduces the space required for fixation which makes this procedure challenging.

Cables, cables with strut grafts, plate and screws, cable plates, and various osteotomy methods are used for fixation of the SFSO during total hip arthroplasty.[4-9] Non-union and implant irritation are the major problems encountered with these methods.[10,11] Denis et al.[12] compared plate and cable in their biomechanical study for the fixation around the femoral stem in periprosthetic fracture model and it was shown that unicortical screw fixation proximal to osteotomy was biomechanically stronger than cable fixation. For this reason, we considered that a proximal humerus plate may be a good alternative for SFSO fixation as it has many locking screws option for the trochanter major region, allows strengthening distal fixation by using longer plates, and may reduce the implant irritation problem due to its thin (3.5 mm) profile. Therefore, in this study, we aimed to evaluate the efficacy of proximal humerus plate in the fixation of SFSO during total hip arthroplasty.

This retrospective study, conducted at Department of Orthopedics and Traumatology of Hacettepe University Faculty of Medicine Hospital, examined total hip arthroplasty patients for the diagnosis of DDH between January 2014 and June 2018. Patients who underwent a SFSO were determined. Patients whose SFSO were fixed with an implant other than proximal humerus plate were excluded since there were not adequate number of patients. Patients with less than one year of follow-up were also excluded. Finally, 30 female Crowe type IV DDH patients (mean age 49.8 years; range, 22 to 68 years) who underwent total hip arthroplasty with a SFSO were included in the study. The study protocol was approved by the Hacettepe University Faculty of Medicine Hospital Ethics Committee. A written informed consent was obtained from each patient. The study was conducted in accordance with the principles of the Declaration of Helsinki.

Posterolateral approach was used in all patients. The acetabular component was placed in the true acetabulum. Subsequently, the femoral canal was prepared before the SFSO and the trial femoral component was placed into the femur. The amount of shortening was determined according to the distance between the center of the acetabulum and the center of the femoral head under slight traction. An oblique SFSO was performed using an oscillating saw in the subtrochanteric region. The proximally coated femoral stem was implanted to all the patients. Rotational stability of osteotomy was achieved with a proximal humerus plate (Figure 1). Proximal fixation was achieved by inserting multiple locking screws at different angles to the proximal segment. Distal fixation with locking screws was performed by choosing the desired length plate to provide fixation in the distal segment. Since the contours of the plate fit adequately to the bony anatomy of the proximal femur, there was no need to bend the plate. 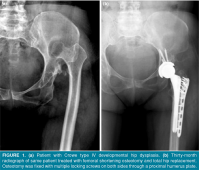 Figure 1. (a) Patient with Crowe type IV developmental hip dysplasia. (b) Thirty-month radiograph of same patient treated with femoral shortening osteotomy and total hip replacement. Osteotomy was fixed with multiple locking screws on both sides through a proximal humerus plate.
× 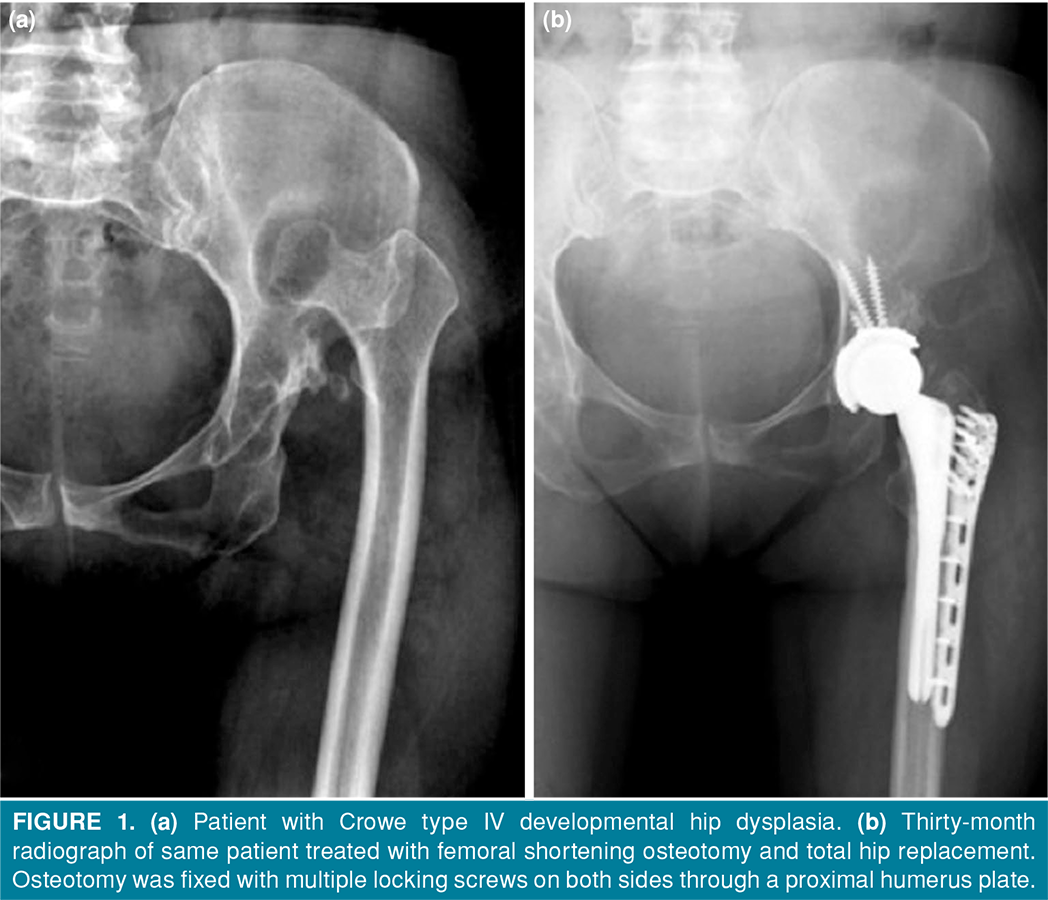 Radiological evaluation was performed on the radiographs taken at the control visits of the patients and a Rush score was calculated for each radiograph at patients' control visits to assess the union of the osteotomy. Patients with a Rush score of 18 or higher were considered to be united.[13] The number of cortex fixed in the proximal and distal segments of the osteotomy were recorded to determine the minimum number of cortices to be fixed at both sides of the osteotomy. Complications of patients at the control visits were evaluated through patient notes. Complications were defined as non-union in osteotomy, implant irritation, and implant failure.

Table 1. Patients’ demographics, number of fixed cortices at both sides of osteotomy, union time, and Rush score at union
×

Denis et al.[12] investigated the biomechanical properties of fixation techniques after periprosthetic femoral fractures and demonstrated that fixation of the proximal region of the fracture with three unicortical locking screws was superior to fixation with three cables. In the current study, the proximal part of the osteotomy was fixed with a mean number of 6.2 cortices and the distal part was fixed with a mean number of 4.0 cortices. Proximal humerus plate offered the advantage of using more than three cortices at both sides of the osteotomy. Considering the 96.7% union rate, we can recommend a minimum of six cortices fixation in the proximal segment and four cortices fixation in the distal segment of the osteotomy with proximal humerus plate.

Various methods have been described in the literature to increase the stability of SFSO (Table II). Different types of osteotomy orientation, cables, plates, and femoral stems are some of these methods.[4,5,7,8,16] The optimal femoral stem option and the optimal implant for osteotomy fixation have not been determined yet. In a biomechanical study where transverse, oblique, Z, and double chevron osteotomy methods were investigated, the superiority of osteotomy methods among each other had not been demonstrated.[7] In previous studies in which SFSO was fixed with strut autograft and cable, Wang et al.[17] reported their non-union rate as 3.5% and Kilicoglu et al.[6] reported their non-union rate as 4%. Sofu et al.[8] had a non-union rate of 5.4% with cable plate fixation. In a study by Charity et al.,[4] in which SFSO was fixed with plate and screws, the non-union rate was reported as 5.5%. The non-union rate was 3.3% in this study, which was comparable to the previous literature. The only patient with non-union had five fixed cortices at the proximal segment and four fixed cortices at the distal segment. There was no bone contact at the osteotomy of the same patient due to a technical error and it had been thought that distraction at the osteotomy was the reason of the non-union. The non-union of this patient was treated with a longer proximal humerus plate and autograft.

Several femoral stem types including conical stems with flutes, rectangular stems, and modular stems have been used to increase the rotational stability of the SFSO in the treatment of DDH.[18] Hua et al.[19] had 0% non-union rate with combination of conical stem with strut autograft and cables. Mu et al.[16] used rectangular femoral stem alone as primary stabilizer of the SFSO and reported a non-union rate of 3.3%. Zeng et al.[20] reported 100% union rate with S-ROM stem with combination of strut graft and cables while Necas et al.[21] used S-ROM stem without a need of secondary fixation material at osteotomy and achieved 0% non-union rate. Our results with proximally coated femoral stem and augmentation of the osteotomy with proximal humerus plate were comparable with the previous literature.

The mean union time of SFSO in the literature ranged from four months to nine months.[5,6,17] In our study, the average time to union was 106 days. We obtained a comparable union time with the previously reported studies. Implant related complications including painful hardware and implant breakages are not infrequent following the fixation of proximal femur. Wirtz et al.[11] reported that eight of their 19 patients complained of trochanteric pain after fixation with anatomical proximal femoral plate. Barrack and Butler[22] reported an implant breakage rate of 19% with the use of cable plate systems. We preferred to use proximal humerus plate to avoid implant-related pain since the proximal humerus plate has low profile compared to the anatomical proximal femoral plate (3.5 mm vs. 4.5 mm). None of the patients complained of implant irritation during follow-up visits. Use of proximal humerus plate may reduce the implant breakage rate of cable plate system as we did not observe implant failure in any patient's follow-up.

Absence of a control group with a different implant and its retrospective nature are the major limitations of our study. We can only compare our results with the previous literature. Further controlled studies may reveal the necessity of fixation of SFSO or the optimal implant for fixation of the SFSO. As the cost-effectiveness of proximal humerus plate in the fixation of SFSO remains unknown, a cost analysis study may be beneficial. Furthermore, we were not able to determine the exact time of the union because of the retrospective design of the study, which may be earlier than our results. A biomechanical study may reveal the amount of stability that can be achieved with a proximal humeral plate in the fixation of SFSO.

In conclusion, we report the results of proximal humerus plates used for fixation of SFSO in Crowe type IV DDH patients. Our study demonstrated comparable results with the previously reported fixation techniques. Proximal humerus plate is thought to be an alternative implant for the rotational control of the SFSO.