Objectives: This study aims to present the results of 21 patients with capitellum fractures treated with open reduction and headless screws by a single experienced surgeon.

Patients and methods: Twenty-one patients (13 males, 8 females; mean age 39 years; range, 18 to 63 years) who were admitted to our clinic between June 2011 and January 2018 with the diagnosis of capitellum fracture and followed-up for a mean period of 45 months (range, 12 to 90 months) were included in this retrospective study. The fractures were fixed with headless cannulated screws by a single surgeon.

Results: The mean range of motion was 102° (range, 65° to 140°) during flexion-extension and 165° (range, 130° to 180°) during supination-pronation. The mean preoperative visual analog scale (VAS) score was 8.5 (range, 6 to 10), whereas the mean postoperative VAS score was 2.2 (range, 0 to 6). According to the Mayo Elbow Performance score, nine patients were evaluated as excellent, six patients as good, four patients as fair, and two as poor. The mean Quick-Disabilities of the Arm, Shoulder and Hand score was 25.1 (range, 4 to 57). Avascular necrosis developed in three patients (14%) and heterotopic ossification was detected in one patient (4%).

Conclusion: Capitellum fractures are difficult to diagnose and treat, and good results can only be achieved by an accurate diagnosis, careful surgical technique, and stable fixation. Larger and more comprehensive studies are required to establish a generalization and more accurate inferences on this limitedly studied subject.

Distal humerus fractures that include the capitellum and the trochlea are rare injuries and constitute approximately 6% of all distal humeral fractures and 1% of elbow fractures.[1,2] If the initial evaluation is not performed correctly and radiographs are not taken in the appropriate position, these fractures can be easily neglected in the emergency department. Exact lateral elbow radiographs should be performed. If possible, computed tomography (CT) should be performed for better evaluation of the fracture fragments and surgical planning should be conducted since capitellum fractures are most commonly treated surgically.[3] These fractures should be treated by the principles of an intra-articular fracture treatment. Proper reduction, stable fixation, and early mobilization of the fracture are crucial in achieving good functional results.[4,5] In this study, we aimed to present the results of 21 patients with capitellum fractures treated with open reduction and headless screws by a single experienced surgeon.

Twenty-one patients (13 males, 8 females; mean age 39 years; range, 18 to 63 years) who were admitted to our emergency orthopedic outpatient clinic with the diagnosis of capitellum fracture between June 2011 and January 2018 and followed-up for a mean period of 45 months (range, 12 to 90 months) were included in this retrospective study. The affected extremity was on the left side in 16 patients and on the right side in five patients. After routine anteroposterior (AP) and lateral radiographs, all patients underwent a CT scan to evaluate the extent of the fracture and make a more accurate classification. According to the Bryan and Morrey classification modified by McKee (Table I), the fracture was classified as type I in 14 patients, type III in three patients, and type IV in four patients.[2,6] According to the AO (Arbeitsgemeinschaft für Osteosynthesefragen) classification[7] (Table II), 17 patients had type B3.1 fractures and four patients had type B3.3 fractures. The mean time from trauma to surgery was 7.6 days (range, 2 to 23 days). One patient who was initially evaluated at another center was operated on 23 days after the trauma. All patients were operated by a single surgeon experienced in upper extremity surgery. No additional injury was detected in the elbow region in 12 patients. Five patients had a lateral collateral ligament (LCL) injury, four had a radial head fracture, and one had an ulnar fracture. One patient had coexistence of LCL injury and a radial head fracture. The study protocol was approved by the Bakırköy Dr. Sadi Konuk Training and Research Hospital Ethics Committee on July 23, 2018 (no. 2018-13-03). A written informed consent was obtained from each patient. The study was conducted in accordance with the principles of the Declaration of Helsinki.

Regional anesthesia was applied in seven patients, whereas general anesthesia was administered in 14. All patients were operated under pneumatic tourniquet. A lateral incision was used in 16 patients, while the posterior approach was utilized in two patients, and lateral and medial approaches were used in three. Capitellum fractures were fixed with 20-30 mm headless cannulated screws (Tasarımmed, Istanbul, Turkey) in all patients (Figure 1). Radial head fractures in four patients were also fixed with headless cannulated screws. All cannulated screws used to fix the capitellum fracture were inserted from the anterior to the posterior. Primary repair was performed in two of the four patients with LCL injury, and a suture anchor was used for fixation in the other three patients with a radial head fracture. In patients without LCL injury, the LCL was left untouched during surgery. Ulna fracture in one patient was fixed with plate-screw. Grafting was not performed in any patient.

Patients were evaluated with the elbow range of motion (ROM), pre- and postoperative visual analog scale (VAS) scores, the Mayo Elbow Performance score (MEPS) and Quick-Disabilities of the Arm, Shoulder and Hand (Q-DASH) score (Table III). In addition, AP and lateral elbow radiographs were taken to evaluate the presence of union, avascular necrosis, (AVN), and arthrosis.

Descriptive statistics were used to define continuous variables in the evaluation of the patient data (mean, standard deviation, minimum, median, maximum). The Kruskal-Wallis test was used to compare more than two variables that were not independent and did not show normal distribution, whereas the Mann-Whitney U test was used in the comparison of two variables that showed the above two characteristics. Spearman’s rank correlation was employed to detect the correlation between two continuous variables. The level of statistical significance was determined as p<0.05. Analyses were performed using the MedCalc Statistical Software version 12.7.7 (MedCalc Software bvba, Ostend, Belgium). 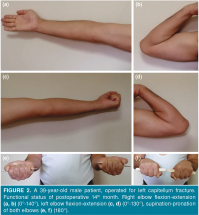 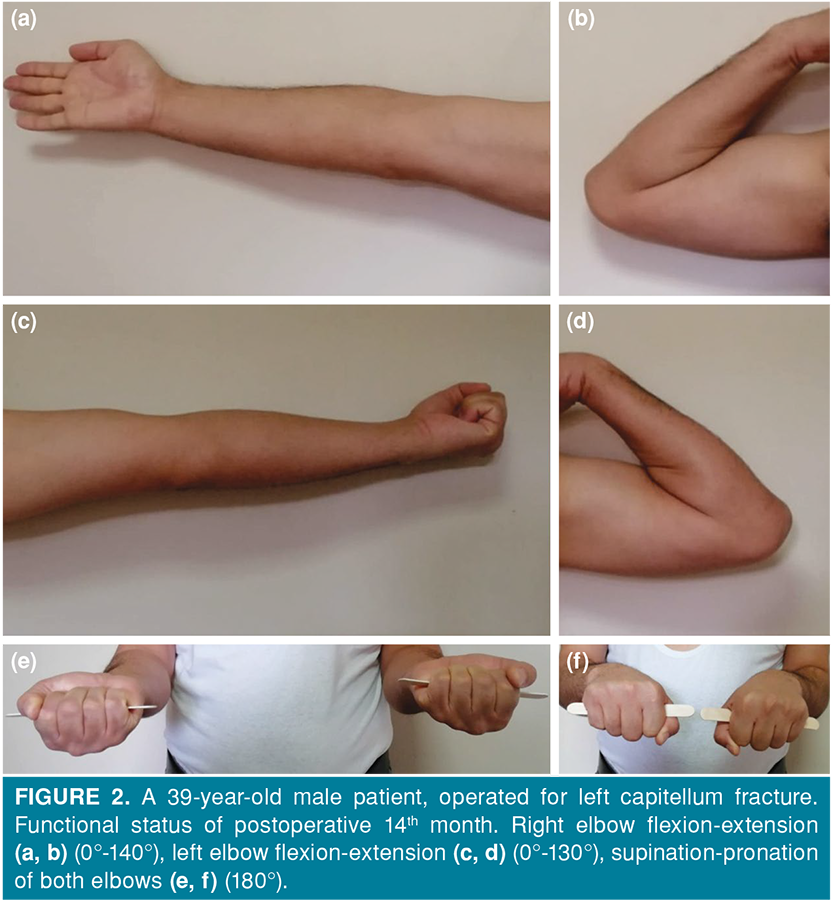 Figure 3. Heterotopic ossification can be seen on postoperative fourth year (a) anteroposterior and (b) lateral radiographs of a 46-year-old male patient.
× 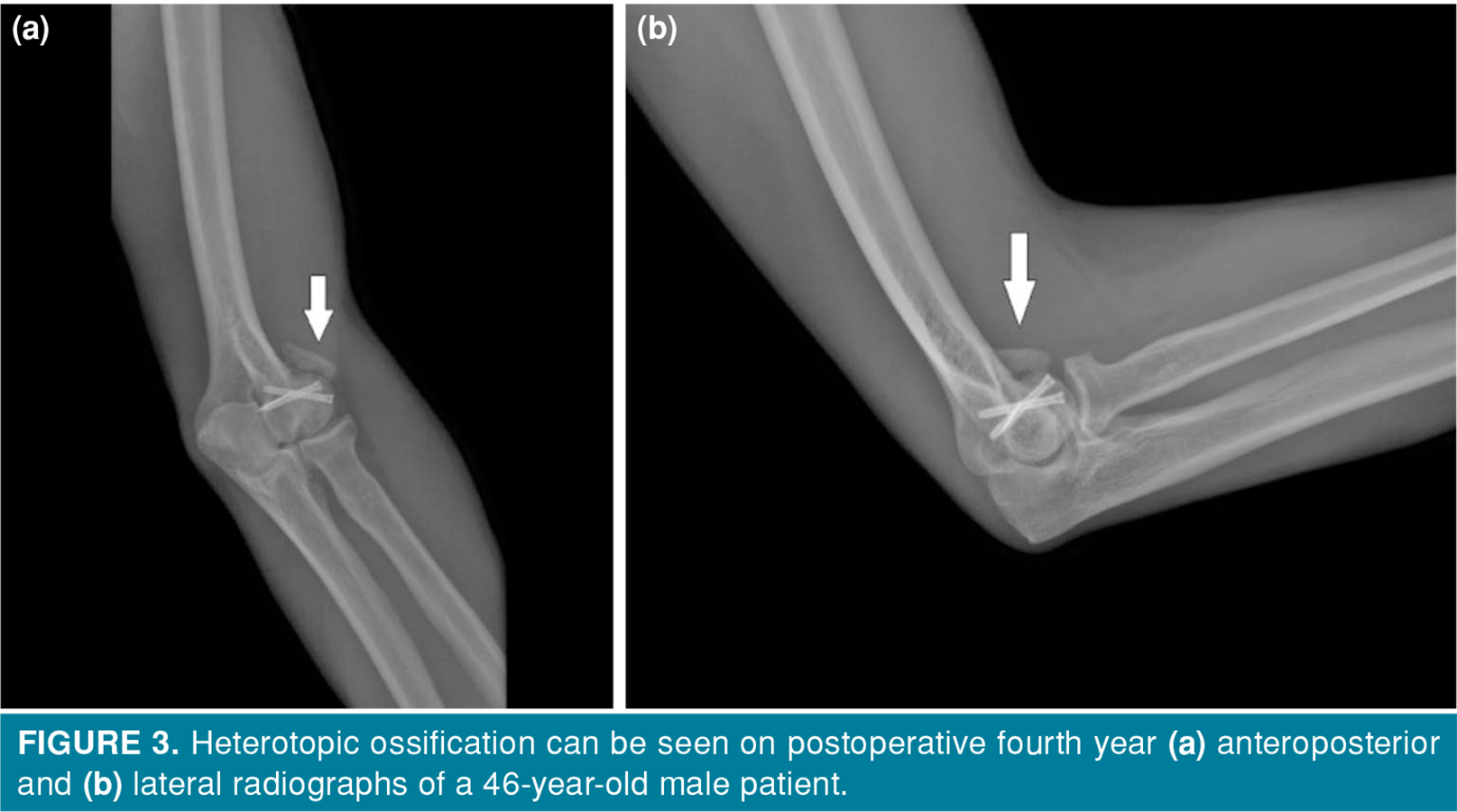 The rating system described by Broberg and Morrey was used to evaluate arthrosis (Table IV).[8] According to this system, no arthrosis was detected in 14 patients (grade 0). Of the seven patients (33%) with arthrosis, one was grade III, four were grade II, and two were grade I.

Non-union was not detected in any of the capitellum fractures. Avascular necrosis developed in three patients (14%). Heterotopic ossification was detected in one patient (4%); however, it did not constitute a significant restriction to movement and did not require removal (Figure 3).

From a functional point of view, we evaluated our patients according to the Grantham elbow evaluation system introduced by Grantham (Table V), which takes the patients’ stability, pain, and ROM into account.[9] According to this evaluation, excellent results were obtained in five patients, good results in five, moderate results in seven, and poor results in four.

Statistically, there was a significant positive correlation between the MEPS and Q-DASH scores and the ROMs during elbow flexion-extension and supination-pronation (Spearman’s rank correlation, p<0.05).

According to the Bryan and Morrey classification, there was a statistically significant difference between the MEPS and Q-DASH scores, (Kruskal-Wallis test, p<0.05). According to the post-hoc paired comparison results, there was also a statistically significant difference between Q-DASH scores measured with type I and type IV fractures (Mann-Whitney U test, p<0.016 [Bonferroni correction]).

Capitellum fractures are injuries that can cause permanent extension loss despite early and accurate diagnosis, anatomical reduction, and early mobilization.[10] In our study, we evaluated 21 patients with capitellum fractures treated with open reduction and headless screws, which can be challenging to diagnose and treat. We encountered AVN in three patients and heterotopic ossification in one. According to the MEPS, we achieved excellent and good results in 15 patients (71%).[11]

It is known that there is a female dominance in capitellum fractures.[12-14] In Mighell et al.’s[12] series of 18 patients, 16 of the patients were females and two were males. In other studies, 60 to 100% female dominance in the capitellum fractures has been reported. Mighell et al.[12] explained that the increased bearing angle might cause a greater force on the lateral column in the extension position of the elbow during a fall. Sultan et al.[13] similarly reported that there were 11 female and four male patients in their series, and Bilsel et al.[14] reported 12 females and six males in their publication. Contrary to these findings from the literature, our patient group consisted of 13 male and eight female patients. Thus, we believe that gender may not be a determining factor in capitellum fractures. Mahirogullari et al.[15] reported that their series consisted of eight males and three females.

The incidence of AVN is reported to vary between 0% and 30% in the literature.[15,20-22] Mighell et al.[12] reported an AVN rate of 17%, which was consistent with other similar studies, but they also mentioned that the presence of AVN did not interfere with the excellent Broberg and Morrey score. On the other hand, some authors did not observe any AVN in their patients.[13,15,20-23] In our study, AVN developed in three patients (14%). This result is consistent with the current literature.

Due to the chondral damage during this injury, these patients are at risk of developing secondary elbow osteoarthrosis.[5,10] In terms of degenerative joint disease or arthrosis, Mighell et al.[12] reported arthrosis in 28% of their patients, while Sultan et al.[13] observed arthrosis only in one patient (7%) from a series of 15 patients who had type I and type IV fractures, according to Bryan and Morrey. All patients in Mahirogullari et al.’s[15] series had type I fractures, and the authors did not encounter arthrosis in any of their patients. In our study, arthrosis developed in seven patients (33%). We believe that the reason for this rate being slightly higher than the literature may be due to the Bryan and Morrey type III fracture, which indicates a comminuted fracture of the capitellum. Statistically significant differences in the MEPS and Q-DASH scores of different fracture types and the difference between the Q-DASH score distribution between type I and type IV fractures according to the post-hoc paired comparison results support this hypothesis. All these findings indicate that fracture types due to injury energy affect clinical outcomes.

In our study, statistically significant correlations were found between the elbow flexion-extension movements, supination-pronation movements, and both postoperative VAS scores and MEPS and Q-DASH scores. These findings indicate that an appropriate stable surgical fixation and rehabilitation of the capitellum fractures are the most critical factors in achieving good functional results.

The lack of a comparison group may be considered a weakness of our study. However, the fact that there were enough patients in our study compared to the current literature, and that all patients were operated by a single surgeon experienced in upper extremity surgery were the positive aspects of our study.

In conclusion, capitellum fractures are challenging to diagnose and treat, and good results can only be achieved by an accurate diagnosis, careful surgical technique, and stable fixation. In addition, due to the limited number of studies on this subject, we believe that larger and more comprehensive studies are required to establish a generalization and more accurate inferences.