Do three-dimensional modeling and printing technologies have an impact on the surgical success of percutaneous transsacral screw fixation?

Objectives: This study aims to determine the role of computed tomography (CT)-derived templates, produced by three- dimensional (3D) modeling, image processing and printing technology, in percutaneous transsacral screw fixation and evaluate the effects of their use on surgical success.

Materials and methods: This prospective study conducted between June 2018 and December 2019 utilized 15 composite pelvis models for transsacral-transiliac screw fixation. For the procedure, modeled templates were utilized for wiring on the left side of the pelvis models, while the conventional method was performed on the right side of the pelvis models. In the computed tomography images acquired after wiring, appropriate wire position was evaluated.

Conclusion: With the use of 3D modeling and printing technology, CT-derived templates can be produced and utilized for transsacral screw fixation procedures and their use increases surgical success by reducing the surgical margin of error.

Caused by high-energy traumas, pelvic injuries are life-threatening complex injuries posing several unfavorable effects on the body. Pelvic fractures account for approximately 3-4.3% of all skeletal fractures.[1,2] Mortality rates due to pelvic injuries vary from 10 to 16%.[1,3] Victims of these injuries display an increased tendency to develop complications due to the nature of the injury and modes of treatment.[4-8] Complications are critical for patient survival and sequelae development.

Percutaneous iliosacral and transsacral-transiliac screw fixation are the commonly preferred surgical methods for the treatment of posterior pelvic injuries. The advantages of this technique include minimal tissue damage due to the surgical procedure, improved stability of the fixation, short surgery time, and reduced risk for wound-related problems in the postoperative period.[9,10] However, patients may be prone to develop complications due to some factors, including variability in pelvic anatomy, the narrowness of the bone corridor to be screwed, and inadequacies in imaging and surgical procedures.[11] In the literature, the current technique has been modified by combining with different imaging techniques in order to decrease the complication rates and increase surgical success. Computed tomography (CT) and computerized navigation systems are the most common combinations introduced for this purpose. It has been reported that the success of surgery is improved when these imaging methods are used in iliosacral and transsacral-transiliac screw fixation. However, applicability, cost, and need for additional experience are the discussed aspects of these methods.

Several industrial sectors (engineering, biomedical, medicine, industrial, space technologies, etc.) have already adopted three-dimensional (3D) modeling and printing technology into their daily practices. In medicine, this technology is used particularly in maxillofacial and spinal surgery, while its use is not common in orthopedics. In this study, we aimed to determine the role of CT-derived templates, produced by 3D modeling, image processing and printing technology, in percutaneous transsacral screw fixation and evaluate the effects of their use on surgical success.

The models were created by an engineer specialized in image processing. A modeling program, a free and open-source 3D creation suite, was utilized for modeling. During the surgical procedures, the models were placed in a radiolucent foam mold and covered with a surgical drape.

The templates created for the study were modeled in two parts (Figure 1a, b). The first part of each template was fixed and it was for use in all pelvic systems. The second part was modular and modeled for each pelvis specifically. 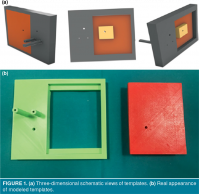 Figure 1. (a) Three-dimensional schematic views of templates. (b) Real appearance of modeled templates.
× 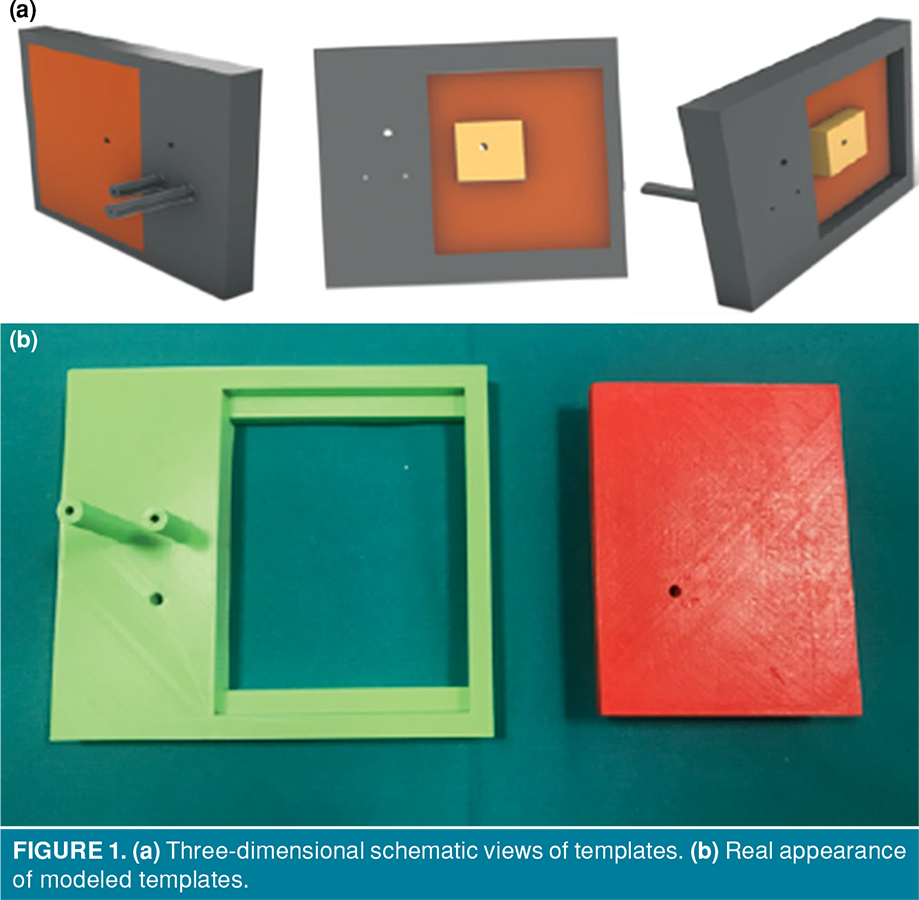 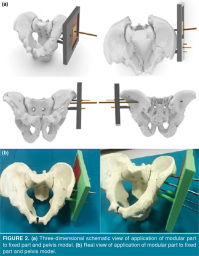 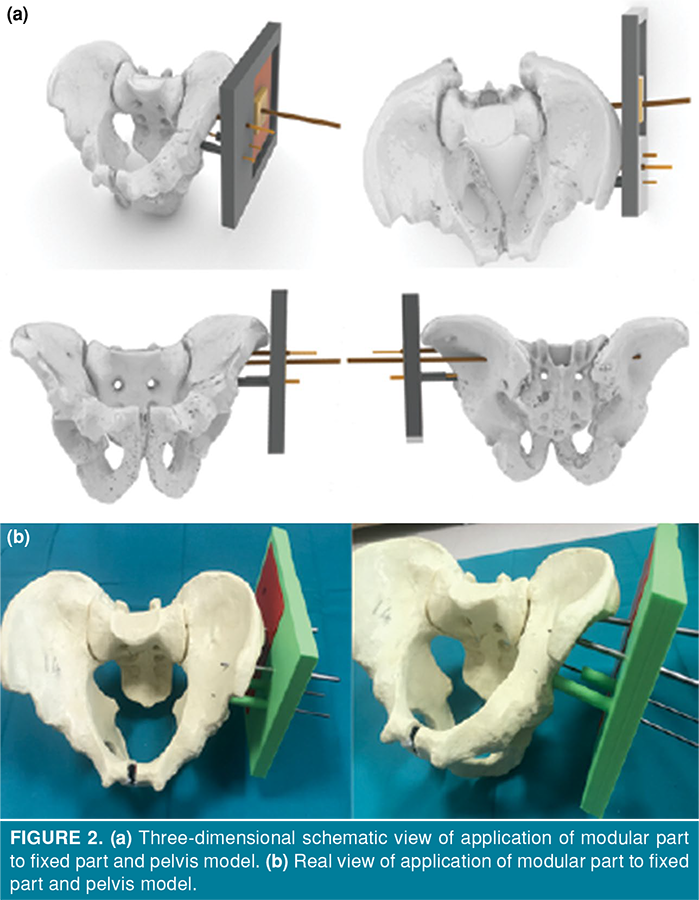 The modular part was fabricated after acquiring the 3D models based on the CT images of each pelvis. Then, the obtained 3D images were uploaded to the 3D modeling program. In this program, the previously fabricated fixed part of the template was brought to the appropriate position by using the guiding K-wires in the supraacetabular region as reference (Figure 2). The modular part was then designed to be placed on groove on the fixed part. The ideal orientation and entry point for the guiding K-wire were determined on the axial and coronal views of the CT images (Figure 3). Using these ideal orientation and entry point, the hole designed for the guiding K-wire to pass through was placed on the designed module. The orientation of this hole was specifically adjusted for each pelvis on the spatial axes by using the 3D modeling and image processing program. Modular parts, specifically designed for each pelvis model, were printed using a 3D printer.

Figure 3. Determination of proper screw placement and insertion on axial and coronal images of computed tomography.
×

The success of the study was evaluated by using the CT images acquired after the procedure. The following were evaluated:

Figure 4. Determination of deviation angle from appropriate Kirschner-wire orientation on axial plane (a) and coronal plane (b) computed tomography images.
× 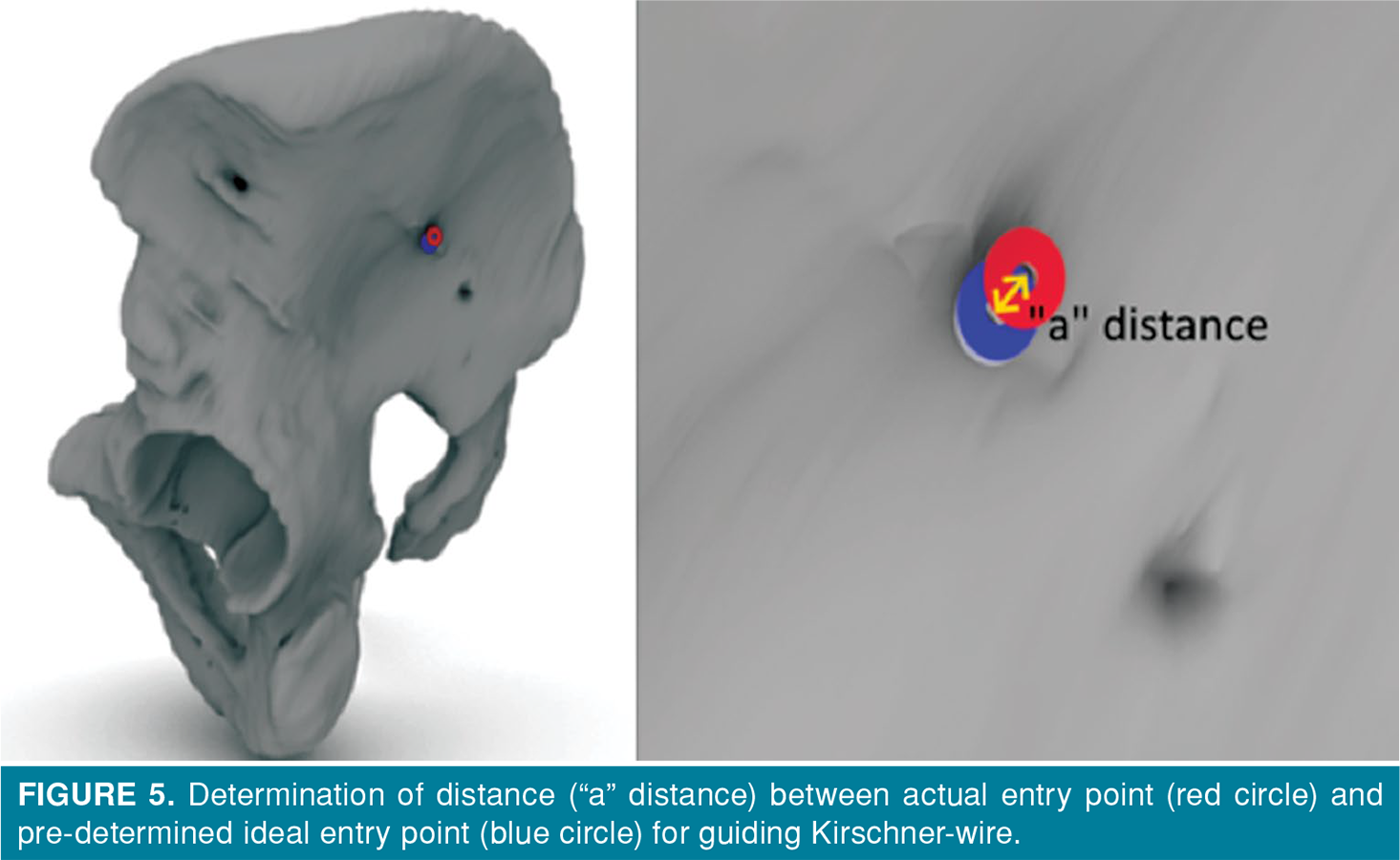 Also, the cost of each template was calculated.

JASP version 0.12.2 software (JASP Team, 2020, University of Amsterdam) was used for analyses. Firstly, descriptive statistics were performed. The Mann-Whitney U test was used as a non-parametric test for determining the differences between the groups. A p value of <0.05 was accepted to indicate a statistically significant difference.

The guiding K-wires were successfully placed in S1 vertebral bodies for both groups in all sacroiliac screw fixation models. Guiding K-wire retention status of the contralateral iliac bone (transsacral- transiliac screw fixation) was 15/15 (100%) in the template models and 11/15 (73.3%) in the conventional method group. In the latter group, in four applications (26.7%), the guiding K-wires passed beyond the margins of the safe corridor after passing through the S1 body (Table I).

The mean distances between the actual and pre- determined entry points of the guiding K-wires were 1.43 mm (range, 0-4 mm) in the template group and 5.97 mm (range, 0.06-11 mm) in the conventional method group. The difference between the two groups was statistically significant (Table I) (p=0.001).

The cost required for the fabrication of one 3D template was found to be 71.33 Turkish liras (12.4 USD).

Pieske et al.[19] demonstrated improved safety of the surgery when CT was used in iliosacral screw fixation. Zwingmann et al.[20] confirmed the findings of Pieske et al.[19] Zwingmann et al.[20] reported a shorter time of irradiation and lower doses in the CT navigation group compared to the control group. Also, they reported that the screw placement results were more favorable in the navigated group. However, the duration of the procedure was not different between the groups. In another study, Zwingmann et al.,[21] compared the rates of inaccurate screw positioning among the conventional method, 2D/3D navigation method, and the CT navigation method, reporting that the screw was incorrectly positioned at rates of 2.6%, 1.3%, and 0.1% in those groups, respectively. Takao et al.[22] demonstrated improved success rates with a CT-3D-fluoroscopy combination in screw fixation procedures. This combined method certainly improves the success of fixation; however, the critical concerns associated with this combination needs to be worked through, including the maintenance of the sterile environment during the procedure, convenient accessibility to CT facilities, the narrowness of the inside area of CT, and irradiation exposure.

In our study, we evaluated the use of templates in transsacral-transiliac screw fixation. After the templates were designed for each pelvis individually, they were fabricated with 3D printing machines for use. The number of studies investigating the use of templates produced by 3D modeling is limited in the literature. Chen et al.[26] used specially modeled personal image-based templates in their study. They reported that the screw positioning was improved, the duration of surgery was short, and the time of exposure to irradiation was reduced in the template group. Yang et al.[27] confirmed those findings by demonstrating favorable screw location and reduced time for the procedure and irradiation exposure in their study. Liu et al.[28] investigated the use of 3D printed templates in sacroiliac screw fixation, finding out that the time required for the surgeon to gain experience was reduced and the feasibility of the surgery became favorable. Zhou et al.[29] compared the use of 3D templates with the conventional method. They reported that compared to the conventional method, the duration of the procedure and the quantity of exposed irradiation were reduced and the reliability of the surgery was improved with the use of 3D printed templates.

Our study findings confirm the results reported by the previous studies discussed above. The guiding K-wires were found in the safe surgical bone corridor for the transsacral-transiliac screw fixation in all of the 3D-modeled templates. However, in the conventional group, the guiding K-wires deviated from the safe surgical bone corridor in four applications (26.7%) and they were not found in an optimum position for the transsacral-transiliac screw fixation. Furthermore, in the template group, the deviation angle from the ideal guiding K-wire axis and distance of the deviation from the ideal guiding K-wire entry point on the axial plane were less compared to those found in the conventional method group. These findings support that the use of CT-derived 3D templates improves the success rate of the transsacral-transiliac screw fixation. Our study is different from the previous studies which used designed templates for mini open surgery. In our study, we specifically designed and used the 3D templates for the percutaneous surgical technique. When examined in terms of cost, the cost per patient was approximately 12.4 USD. This amount is quite reasonable considering surgical complications and the resulting costs.

The small sample size is the limitation of our study. Further large-scale studies elaborating the use of CT-derived model-based templates in transsacral- transiliac screw fixation are needed. We believe that the method will be implemented into the surgical practice based on the results to be reported by future studies. A critical aspect of our study is the required know-how to use the modeling programs to create the templates. In our study, an engineer, specialized in image processing, designed the model and fabricated the templates. We think that the development of simple software specifically designed for creating CT-derived models to fabricate templates for the transsacral-transiliac screw fixation procedure will allow implementing this method to common surgical practice.

In conclusion, our study has found out that the use of patient-specific CT-derived 3D model-based templates in transsacral-transiliac screw fixation improves the accuracy of screw placement and orientation, increases the surgical success rate, and decreases the potential to develop complications. The potential costs associated with this procedure are reasonable. In addition, we predict that the exposed radiation doses caused by scopy will be decreased significantly by using this method.

This study was supported by the Scientific Research and Project Coordination Center of Yozgat Bozok University (project number: 6602c-TF/18-210).