Objectives: This study aims to propose a novel method to detect articular penetration of screws by relying on their electrical conductivity properties and control the validity of this method.

Materials and methods: In this ex vivo study, conducted between June 2017 and August 2017, we used five fresh sheep shoulder joints. First, the shoulder joint space was filled with saline solution. An insulated cannula was placed in the joint capsule, and a conductive wire was introduced into the joint via this cannula. A single titanium screw was inserted from the tuberculum majus into the posteroinferior quadrant of the humeral head under fluoroscopic observation. Conductivity was continuously measured using a digital multimeter. When a sudden decrease in conduction resistance was detected, fluoroscopic images were obtained in the anteroposterior (AP) and lateral directions. These images were assessed for penetration by a blinded surgeon. Penetration was confirmed by dissection of the joint.

Results: There was a significant decrease in electrical resistance when screw penetration occurred (p<0.001). All penetration events were confirmed using our novel method. For all five of the specimens, either AP or lateral images could not be used to confirm penetration. For two of these specimens, penetration was undetectable in both AP and lateral fluoroscopic images, but a decrease in resistance was recorded.

Conclusion: The described method exhibits greater sensitivity and accuracy for metal penetration to joint, and it is effective in detecting screws in the joints. The novel method described in this paper was applied in a prototype setting, and we believe that this concept can continue to be developed.

Screw penetration through a joint may result in poor outcomes and is a common reason for revision surgery, particularly in trauma surgery.[1-5] Unrecognized intraarticular screw penetration causes chondral damage, and subsequently exacerbates chondrolysis or osteoarthritis. Fluoroscopic images provide two- dimensional views and may not be sufficient for accurate assessment of screw penetration.[6-8] Attempts to detect potential joint penetration expose involved personnel to radiation overdoses. Spross et al.[9] claimed that nearly half of screw penetration events cannot be detected using standard intraoperative images but can be detected only via postoperatively obtained computed tomography images.[1-5]

We developed a novel method for detecting screw penetration based on the electrical conductivities of different materials and mediums. We hypothesized that a screw with articular penetration will provide a more conductive medium than a screw secured in subchondral bone and that conductivity will increase when the metal screw pulls out of the subchondral bone and contacts intraarticular fluid. An ex vivo study was designed to evaluate this approach. To our knowledge, our proposed technique is the only method that relies on the conductivity features of screws to assess joint penetration. Therefore, in this study, we aimed to propose a novel method to detect articular penetration of screws by relying on their electrical conductivity properties and control the validity of this method.

In this ex vivo study, conducted at Bezmialem Vakıf University Faculty of Medicine between June 2017 and August 2017, five fresh sheep specimens were used. These specimens were harvested from distal scapulothoracic joints with an intact shoulder joint. The study protocol was approved by the Bezmialem Vakıf University Faculty of Medicine Ethics Committee (no.: 2015/213).

First, fresh joint specimen was placed on surgical table. The exact location of joint and humeral head was confirmed via fluoroscopy (Ziehm Vision R, Ziehm Imaging GmbH, Nürnberg, Deutschland). After placement of the guide pin and cannulated drilling of proximal humerus, a 4 mm titanium cannulated screw (TST Tibbi Aletler San. ve Tic. Ltd. Sti., Istanbul, Turkey) was inserted from the tuberculum majus to the posteroinferior quadrant of the humeral head (Figure 1). Then, a 16 or 18 Gauge guidewire with a spinal needle introducer (Ozyon Medikal, Yenimahalle, Ankara, Turkey) was inserted into the joint (Figure 2), and the joint space was filled with saline. The needle was removed, leaving the plastic sheath in place. A conductive wire was inserted via the cannulated sheath such that one end was in the joint space and the other end was at the negative pole of an ammeter (Metrix MTX 3283 Handheld Digital Multimeter, Chauvin Arnoux, Paris, France). The cannulated screw was prepared by connecting its head to the positive pole of the ammeter with a conductive wire. 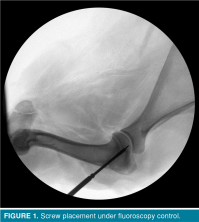 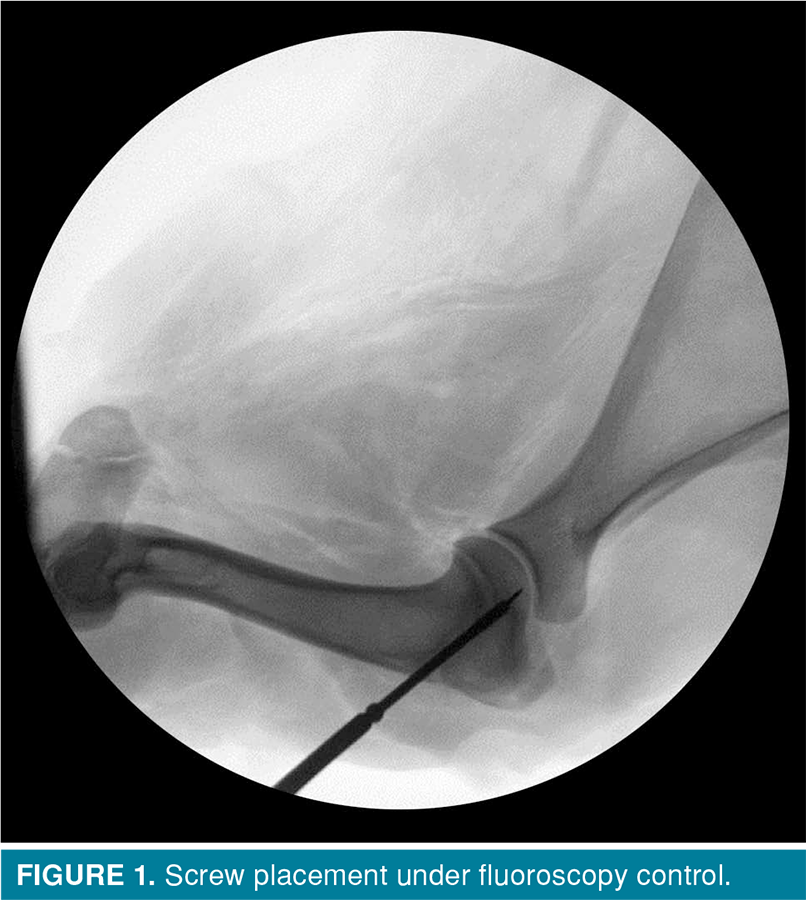 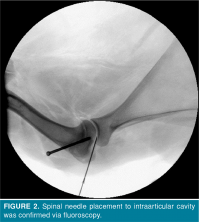 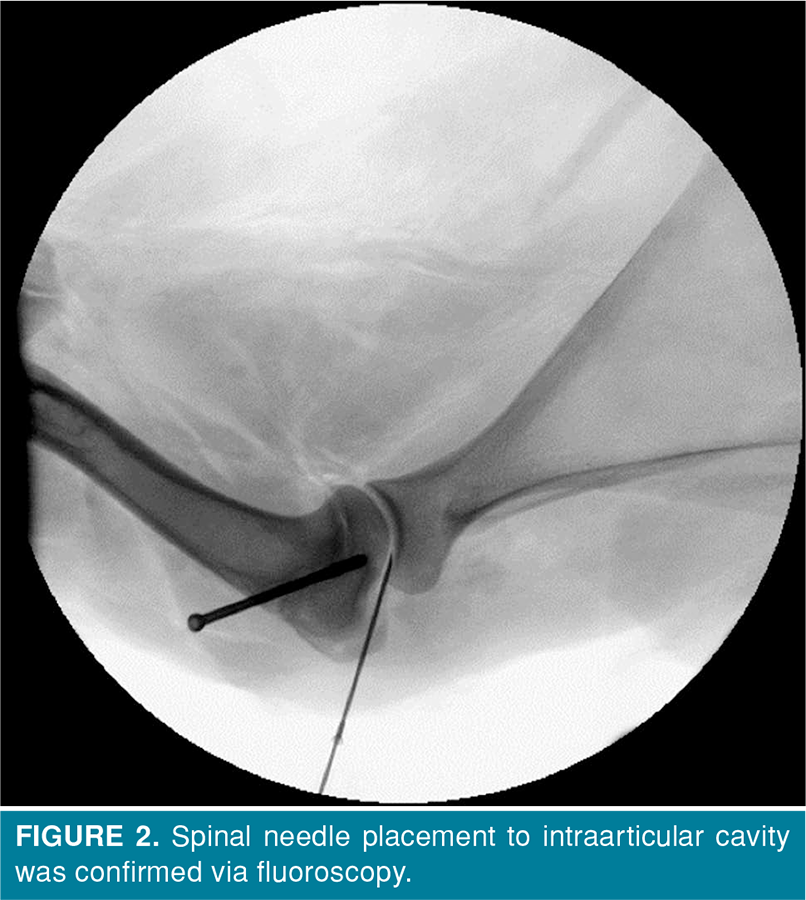 The screw was then advanced under consecutive anteroposterior (AP) and lateral fluoroscopic observations (Figures 3, 4), and simultaneous conductivity measurements were obtained in all steps. The experiment was stopped upon detection of a sudden decrease in electrical resistance measured using the ammeter or joint penetration of the screw in any fluoroscopic observations, and the joint was dissected to confirm penetration (Figure 5). 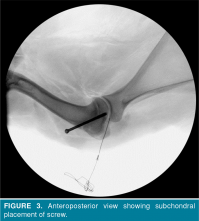 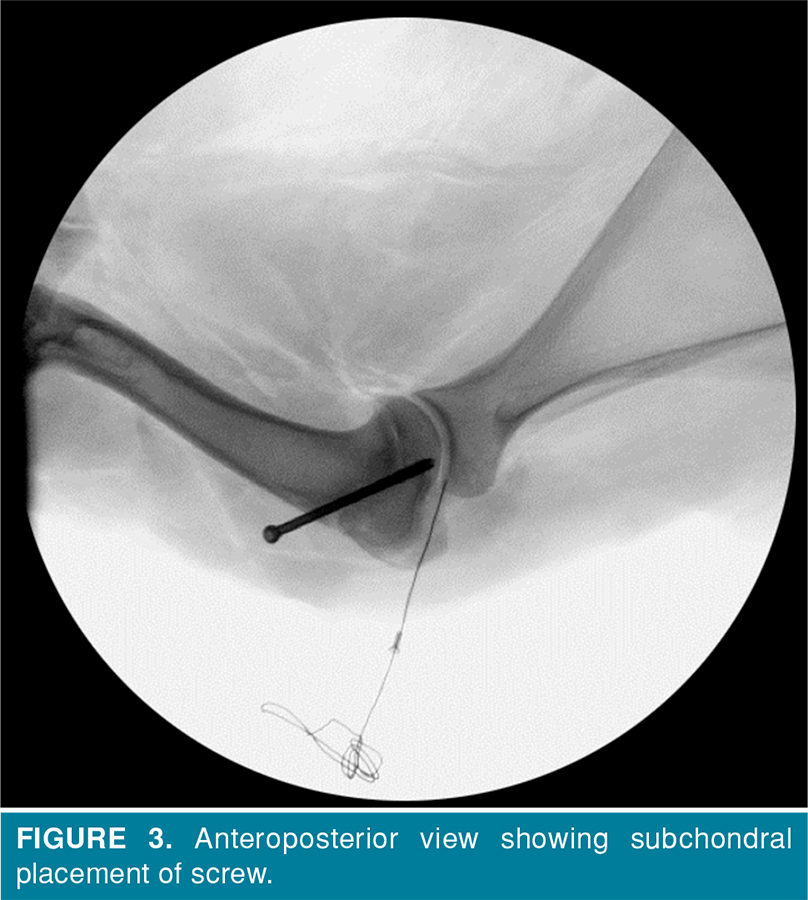 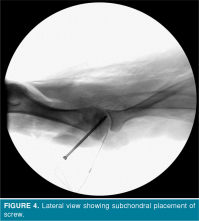 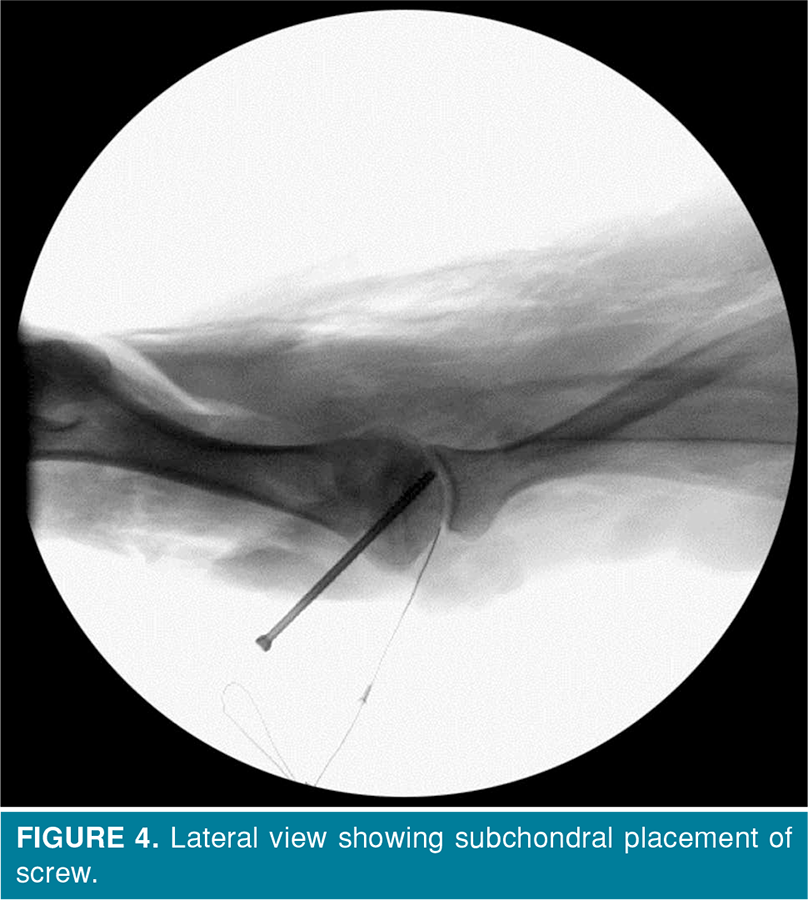 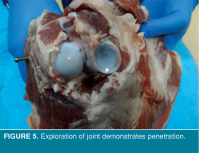 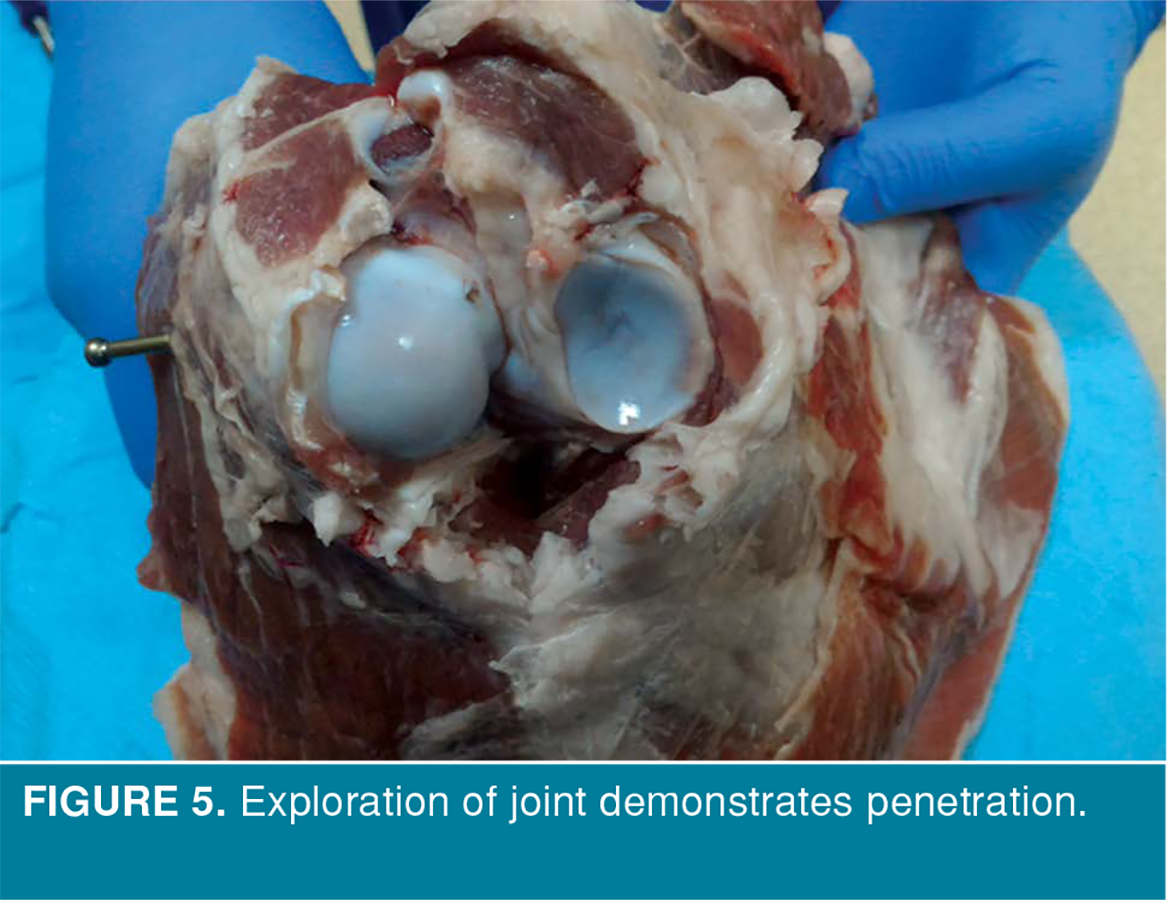 Same experimental procedure was applied to all five joint specimens, and both fluoroscopic observations and conductivity measurement records were recorded. The surgeon who was assessing fluoroscopic images was blinded to the ammeter measurements during the experiment.

After fluoroscopic control of the screw tips immediately after the change in conductivity, screw tips were located subchondrally in four and penetrated in one of the post screw placement images. On the other hand, screw tips were subchondral in three of the lateral fluoroscopic views, and penetrated in the remaining two. Joint penetration could not be detected fluoroscopically in both AP and lateral views of two samples. After dissection of samples, exact penetration was detected in all five samples. Joint penetration of a screw produced a significant decrease in electrical resistance and increase in conductivity (p<0.001) (Table I).

Table 2. Despite electrical confirmation, fluoroscopy was unable to show penetration in seven of 10 planes
×

In this study, we were able to detect the iatrogenic joint perforation with electrical conductivity method. Blind spots confound decision making with respect to screw penetration. An ex vivo animal experiment indicated that our electrical conductivity method could potentially be used to avoid screw penetration in periarticular fracture surgeries. The measured conductivity values remained lower when the screw was subchondrally located. As the screw advanced forward through the bone, these values significantly changed immediately after penetration occurred. As a novel technique, our method has many advantages: (i) it is radiation-free and safe for both the patient and the operative team; (ii) it does not need a long set-up period, including surgical covering of any device etc., which may extend the surgery; (iii) it is not a heavy device and is easy to handle if needed; (iv) it does not need a qualified operator besides the surgeon; and (v) it does not require having any special positioning, which may be very difficult perioperatively. However, a single animal study is not enough and further studies are required to evaluate the efficacy, safety and cost-effectiveness of this method.[10]

Images can show only a two-dimensional projection of a three-dimensional object and do not allow for accurate decisions to be reached in spherical joint surfaces.[11] In addition, superposition of different layers is a major problem in fluoroscopy. To avoid screw penetration, multiple fluoroscopic views are needed in general, which is extremely difficult in certain cases. Recurring exposure to radiation, even at low doses, is harmful for the patient and surgical team. Live fluoroscopic imaging in suspicious cases is another method that involves more radiation exposure during surgery.[12] Three- dimensional (3D) fluoroscopy is a novel method that may be more successful than standard fluoroscopy for perioperative detection of penetration.[13] However, this technology is not currently available in most operating rooms, and produces relatively low- quality images with high dose of radiation exposure continuing for up to 20 seconds. On the other hand, systems for performing 3D fluoroscopy function in an isocentric manner. Therefore, it may be challenging for shoulder cases.[13] Our method offers a radiation- free and easily accessible method of perioperatively detecting screw penetration.

Most joint penetration studies have focused on surgeries of the hip or shoulder, both of which are spherical in nature; in such surgeries, it is difficult to identify potential penetration events due to blind spots.[1-11,14-22] Penetration rates of 4.9 to 23% after proximal humerus surgery have been reported in various studies.[1-4] Sproul et al.[16] reported that screw penetration complication was the most common reason for revision surgery following proximal humerus open reduction internal fixation. Despite the use of postoperative cut-outs, a certain subset of penetrations occur during initial screw placement.[12-14,17,18,20-22] The secondary screw perforation rate was 57% of cases in a recent study that included 121 patients.[17] We used a shoulder model in our study which is the most commonly discussed joint in the literature.

Certain specific views are defined in the context of obtaining an image for detecting intraarticular penetration.[5,9,20] Spross et al.[9] claimed that detection of proximal humerus perforation with 100% sensitivity could potentially be achieved via the use of a combination of four types of images. Some authors recommend axillary fluoroscopic view.[5] However, repositioning of the fluoroscope takes time and may be difficult due to both patient- and table-related factors. The acquisition of a specific image requires a surgeon to hold the extremity in a certain position that results with extra radiation exposure for the surgeon. On the other hand, an experienced fluoroscopic technician is needed to obtain an exact view. Our method does not require a qualified operator and is a radiation-free approach for both patient and surgeon.

Certain studies have offered different mathematical methods for pre- or perioperatively predicting penetration.[11,14,19] Authors have attempted to solve the penetration problem via the use of multiple templates that reveal blind spots to draw greater attention to these locations.[7] Despite their reported prediction strength, these approaches have not become popular, potentially due to their impractical nature, particularly during an ongoing surgery. Moreover, these methods require fluoroscopic imaging. Our method offers a practical way to perioperatively detect screw penetration.

Our study had certain limitations. First, the novel system cannot discriminate between drill perforations and screw penetration and can therefore produce false positive results. The fluid may come into the "tunnel" created and touch the screw, thus giving a false positive reading. Second, intraarticular extension of the fracture may also generate false positive results. Third, in some of the proximal humerus fractures, the joint space may open to the surrounding tissues and the leaked fluid may interfere with conductivity. Fourth, there may be potential applicability problems in case of existing internal electrical device (i.e. pacemaker/stimulator) in elderly population. Finally, intraoperative placement of an intraarticular catheter for conductivity measurement may require the use of fluoroscopy and represents an additional intervention during surgery. Therefore, future clinical studies can be performed to assess the efficacy of the proposed approach during surgery. Although this method has certain potential limitations and several weak points, the current research can be considered a proof of concept and an example of the general application of this novel method, which can continue to be developed in the future.

In conclusion, this novel method appears to be reliable when compared to traditional fluoroscopic method. This method can show whether or not there is any screw in the joint, while it cannot detect how many and which screws penetrated if so. The effectiveness of this approach in terms of cost-effectiveness and time should be confirmed in subsequent clinical studies.