Comparison of the accuracy of the cannulated pedicle screw and the classical pedicle screw in the treatment of Scheuermann’s kyphosis: A retrospective study

Objectives: This study aims to investigate if use of cannulated pedicle screw (CPS) in the dysplastic pedicles in Scheuermann’s kyphosis (SK) increases the accuracy rate of the screw and reduces screw-related complications.

Patients and methods: This retrospective study included 21 patients (11 males, 10 females; mean age 19.1 years; range, 13 to 22 years) (550 screws) who received correction with pedicle screws due to SK deformity between May 2015 and January 2019. Between 2017 and 2018, classical pedicle screws were used in addition to CPSs in the upper thoracic region (T2, T3, T4) and thin pedicles (group 1). However, during the years 2015 to 2016, only classical pedicle screws were used for the patients who underwent posterior instrumentation for SK (group 2). Computed tomography scanning was used to investigate the accuracy of the screws.

Conclusion: The use of CPS in the surgical treatment of SK does not increase the complication rate; instead it increases the accuracy of the screw. For this reason, we believe that CPS may be an effective and reliable option in the treatment of SK.

Scheuermann’s kyphosis (SK) is a spinal deformity characterized by anterior angulation of more than 5 degrees in three successive vertebra, stenosis in the disc interval, irregularity, and Schmorl nodes in lateral radiography (Figure 1c, 2c). The incidence of this disease, which was first designated by Scheuermann[1] in 1921, varies between 4 to 8%.[2]

Figure 1. (a, b) A 15-year-old female patient had preoperative 96-degree curvature. (c) Radiologic signs of Scheuermann's kyphosis were more clearly seen by tomography. (d, e) Classical pedicle screws were implanted to all vertebra and seen on postoperative anteroposterior and lateral radiographs.
×

As the pedicles are usually sclerotic and rotated or too narrow in adolescent spinal deformities, it is considerably challenging to place pedicle screws in these patients.[3,4] For this reason, methods that facilitate screw placement were developed to reduce complications that might develop following potentially incorrect screw placement. Cannulated pedicle screws (CPSs) are increasingly preferred by many spinal surgeons to increase the accuracy of the screws.[5,6]

Cannulated pedicle screws had been previously used in adolescent idiopathic scoliosis (AIS) patients, and their effectiveness was proven. Although CPS is frequently preferred in SK and we opine that it reduces the rate of screws implanted incorrectly, we could not find any study about this subject in the literature. Furthermore, we could not find any study clarifying the accuracy of the screw in SK. Therefore, our study is probably the first investigation that searches the accuracy of CPS in SK.[7] Thus, in this study, we aimed to investigate if use of CPS in the dysplastic pedicles in SK increases the accuracy rate of the screw and reduces screw- related complications.

This retrospective study was conducted at Atatürk University Research Hospital. The study included 21 patients (11 males, 10 females; mean age 19.1 years; range, 13 to 22 years) (550 screws) who received correction with pedicle screws due to SK deformity between May 2015 and January 2019. Patients who underwent posterior instrumentation due to SK, who had good-quality postoperative computed tomography scans, and at least one-year of follow-up were included. Care was taken to establish that instrumentation for SK (group 2) (Figure 1). Also, considering the incorrectly sent screws during fluoroscopic control, those screws were removed and replaced with the CPSs (group 1) (Figure 2).

Figure 2. (a, b) A 17-year-old male patient with 84-degree preoperative kyphosis angle. (c) Irregularities in disc space, loss of height in vertebral corpus, wedging, and angulation of more than five degrees in three consecutive vertebra are more clearly seen on tomography. (d, e) Postoperative anteroposterior and lateral radiographs of patient in whom we used cannulated screws in dysplastic pedicles.
×

While implanting the transpedicular screw, a path of 15-20 mm was opened with a pedicle finder after the insertion site had been opened. Later, the route was expanded with a tapper, and an appropriate-length screw was placed. The screw thickness was 5 or 6 mm (Figure 3). While implanting screws to the dysplastic and thin pedicles, the lateral wall of the vertebra was found with a pedicle finder, and an insertion path was formed after the insertion site was opened. The guidewire of CPS was inserted into the paved route. The screw was implanted without a tapper through the guidewire (Figure 4). When we concluded that the screw found its path, the guidewire was removed to avoid visceral organ injury. The thicknesses of the CPS were 5.5 or 6.5 mm (Figure 4).

Figure 3. Intraoperative photos and images showing steps of cannulated pedicle screw placement. (a, b) Accuracy of path was ensured with a probe and pedicle sound, after checking with pedicular sound for any violation, (c, d) a guidewire was inserted, (e, f) a cannulated screw was then inserted via guidewire. Note: For illustration, we used technique for fluoroscopy images, but we did not use fluoroscopy when screw was inserted.
× 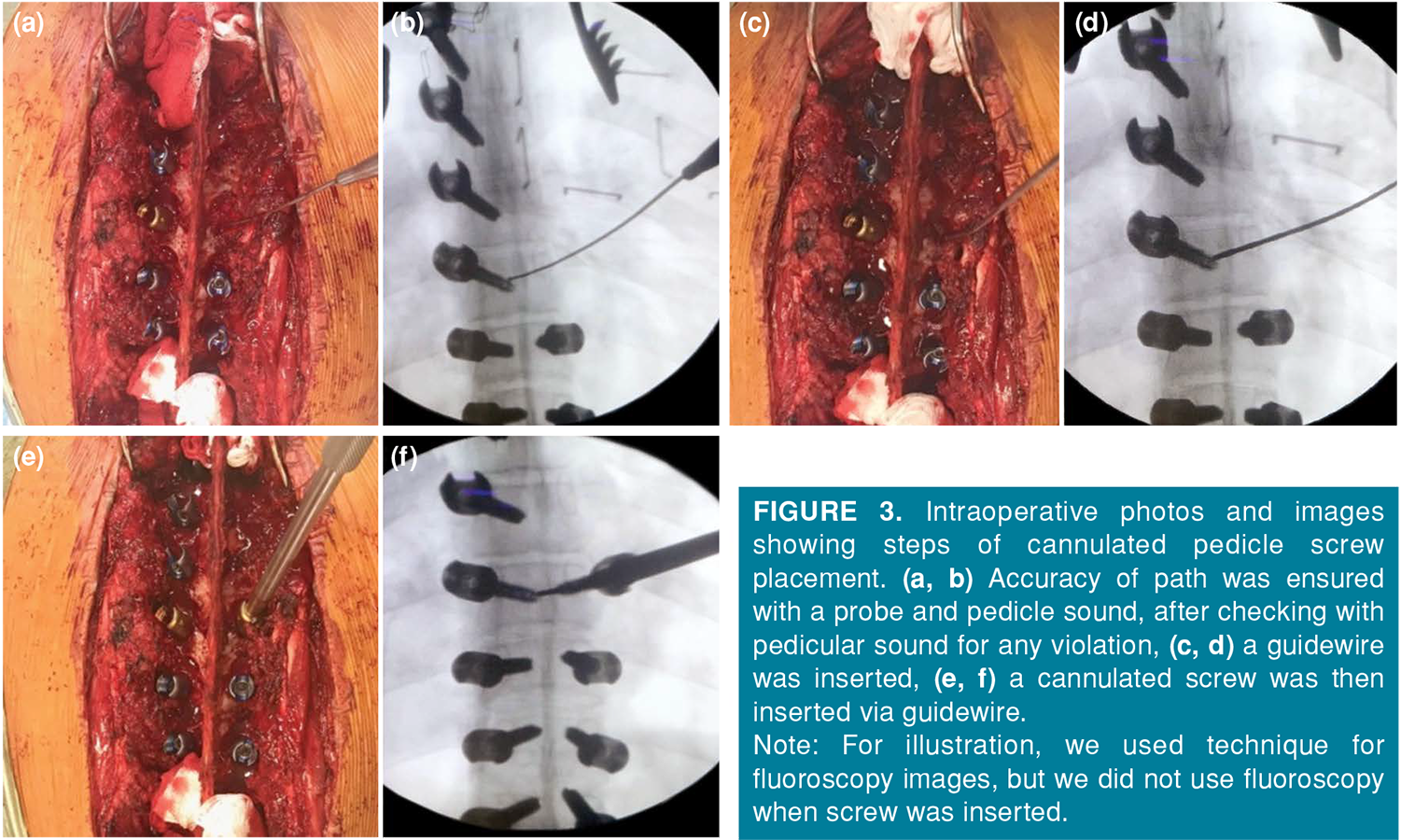 Figure 4. (a, b) Since this vertebra had too thin pedicles to be able to send transpedicular screw, cannulated screws were sent by extrapedicular screw technique.
× 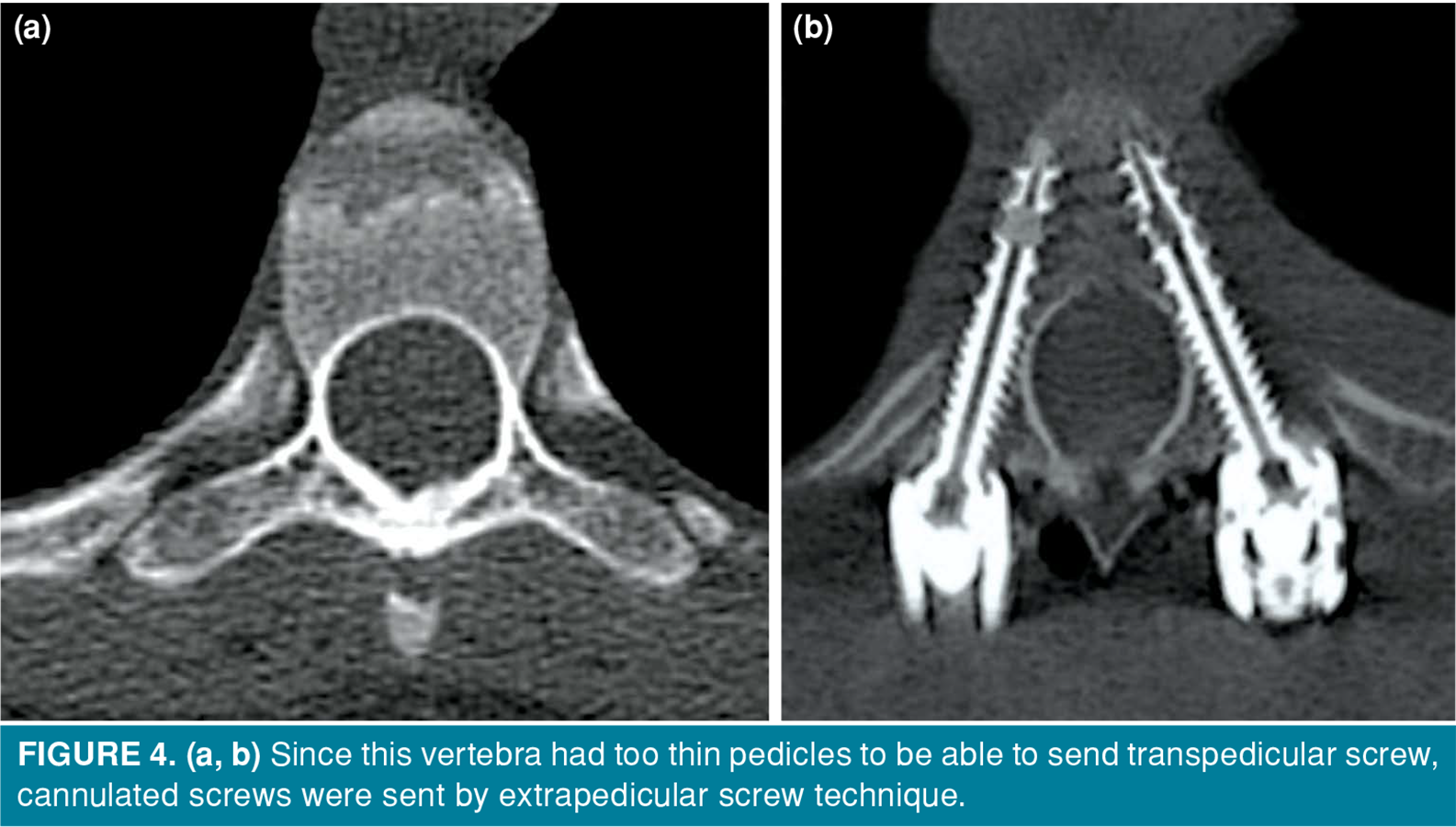 Preoperatively, all patients underwent ambulatory anteroposterior and lateral X-ray and computed tomography (CT) investigations of the thoracic vertebra. Postoperatively, early period X-ray, final control X-ray, and CT investigation at postoperative day one were performed for all patients. In this study, the degree of malposition in the screws was determined using the Rao’s classification.[8] According to this classification, screw placement was graded in the CT scans as follows: grade 0: no pedicle perforation, grade I: only the threads outside the pedicle (less than 2 mm), grade II: core screw diameter outside the pedicle (2-4 mm), and grade III: screw entirely outside the pedicle. The distance between the medial border of the malpositioned screw and the medial wall of the vertebra was measured (Figure 5). The distance between the lateral edge of the lateral malpositioned screw and the lateral wall of the corpus was measured as well (Figure 6).

The IBM SPSS version 20.0 software (IBM Corp., Armonk, NY, USA) was used for statistical analysis. Data were presented as mean, median, minimum, maximum, standard deviation, percentage, and proportions. The normal distribution of the numerical variables was checked with the Shapiro-Wilk test. Independent samples t-test was used in the comparison of two independent groups with normal distribution; otherwise, the Mann-Whitney U test was used. The Pearson chi-square test (or Fisher exact test) was used to compare categorical variables between groups. A p value of less than 0.05 was regarded as statistically significant.

Fifty-three patients who received correction with pedicle screws due to kyphosis deformity between the years of 2015 and 2019 were evaluated. Of these patients, seven with corpectomy, nine with positional kyphosis, eight missing postoperative good-quality CT, and eight with less than one year of follow- up were excluded. The results of the remaining 21 patients (550 screws) were analyzed (Table I).

Table 2. Comparison of pedicle perforation between groups 1 and 2
×

The highest perforation was in the T2 vertebra. Besides, there were significantly fewer perforations in the CPS group as proceeded towards the proximal vertebra, whereas there was no significant difference in T8, which was usually the apex of the curvature, as well as its distal side (Table III).

Table 3. Comparison of perforation between groups 1 and 2 according to vertebral level
×

No complications were seen at the end of the 30-month follow-up period in both groups, except for superficial wound infection in the early postoperative period and a fracture in the screw of the third lumbar vertebra after falling in group 2. The patient had no clinical symptoms due to the fall. No complication arising from the screws was encountered in group 1.

Although the anterior approach was routinely applied in SK before the pedicle screws, currently, with the demonstration of the strength and reliability of the pedicle screws in posterior osteotomies, the treatment of SK is mostly performed via the posterior approach.[9,10] To avoid the potential catastrophic complications in SK as well as other spinal deformities, all surgeons try to place the pedicle screws into the safest area possible. Diverse methods were developed for this. Among the most- known ones of these methods, intraoperative Iso-C 3-dimensional navigation and CT navigation have been demonstrated to decrease perforation rates.[11,12] However, these systems increase the duration of surgery and are unavailable in most medical centers. Also, studies showed that even though they are superior to the freehand technique, these methods are not perfect; screws might be used incorrectly even with these systems.

Although the reliability of the cannulated screws was proven in AIS patients, we could not find any study in which the cannulated screws were used in SK. To avoid postjunctional kyphosis that might develop postoperatively, as many surgeons do, we tried not to fully open the facet of the last vertebra to which a screw is sent in the proximal side. Soft tissues around the area to which a screw will be inserted make it considerably challenging to insert screws.

Furthermore, the anesthesia sphere and the patient's head are other factors, which make it challenging to insert screws in the proximal area (Figure 7). 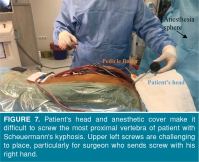 Figure 7. Patient's head and anesthetic cover make it difficult to screw the most proximal vertebra of patient with Scheuermann's kyphosis. Upper left screws are challenging to place, particularly for surgeon who sends screw with his right hand.
× 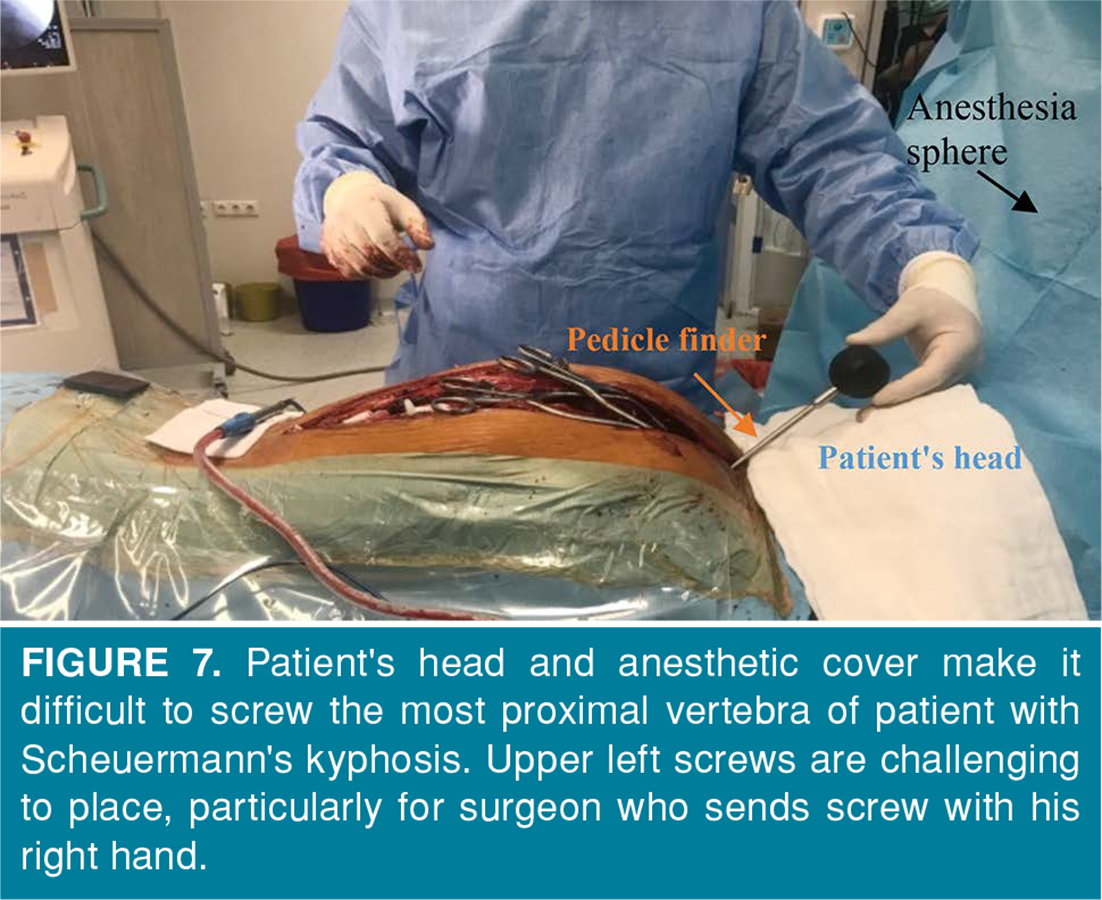 Due to the reasons mentioned above, we decided to use CPSs to place the screws more safely in SK patients. Cannulated pedicle screws provide the opportunity to control the screw accuracy as well as prevent the screw from deviating from its direction through the guidewire. However, it controls the screw accuracy only in the lateral plane. In other words, it is not possible to control the precision in the medial plane. Compatible with this, there was no significant difference between the two groups concerning medial perforation; the lateral perforation rate was significantly less in group 1. There may be several reasons for the higher lateral perforation rate in the group with classical pedicle screws. The screw may easily direct to the lateral area due to the horizontal shape of the vertebra. Besides, since the vertebra becomes more concave in the upper thoracic region, misplacements may occur even though the path of the screw is prepared by tapping when the extrapedicular screw is sent.[4,6]

Although this is the first study in which the screw accuracy is investigated in SK patients, it was a retrospective study. Hence, we could not examine the effects of the cannulated screws on radiation exposure, the operation period, and the bleeding amount. Furthermore, the screws were used at different times, even though all screws were placed by the same experienced spinal surgeon. We think that prospective studies with more extended follow-up periods and more patients will clarify these discussions.