Objectives: This study aims to compare the early clinical, functional and radiographic outcomes of a small cohort of patients with calcaneal fractures treated with closed reduction using a dual- point distraction system and the traditional lateral approach.

Patients and methods: We prospectively treated 40 patients with calcaneus fractures who presented to our emergency department between January 2017 and February 2018. In total, 35 patients (22 males, 13 females; median age 39.8 years; range, 19 to 57 years) were included in this study since five patients were not followed up. Fractures were classified according to the Sanders classification system using computer tomography images. Clinical outcomes including postoperative two-week visual analog scale (VAS) score, sickness absence period, operating time and complication rate were recorded.

Conclusion: Closed reduction using dual-point distraction can be preferred owing to many advantages including considerably decreased risk of wound complications, sickness absence period and length of hospital stay as well as superior postoperative rehabilitation with a low pain score.

Restoration of the heel height and length, realignment of the posterior facet of the subtalar joint and restoration of the mechanical axis of the hindfoot are the targets to be achieved in the surgical treatment of calcaneus fractures.[1] The gold standard treatment for displaced intraarticular calcaneus fractures remains controversial.[2,3] The extended lateral approach and open reduction and internal fixation (ORIF) have traditionally been used for the fixation of most displaced intraarticular calcaneal fractures, which are considered gold standard treatments. However, these treatments are associated with a high incidence of complications such as wound complications, peroneal tendonitis and infections.[4,5]

Various minimally invasive techniques have been described to prevent these complications.[6,7] Closed reduction and minimally invasive fixation assisted with bidirectional distraction have been successfully and safely used for calcaneus fractures.[8-10] The surgical technique involving a dual-point distractor has been described as an alternative for the management of joint depression-type fractures and comminuted fractures.[9] In this study, we aimed to compare the early clinical, functional and radiographic outcomes of a small cohort of patients with calcaneal fractures treated with closed reduction using a dual-point distraction system and the traditional lateral approach.

We prospectively treated 40 patients with calcaneus fractures who presented to our emergency department between January 2017 and February 2018. In total, 35 patients (22 males, 13 females; median age 39.8 years; range, 19 to 57 years) were included since five patients were not followed up. The study protocol was approved by the Ümraniye Training and Research Hospital Ethics Committee (no.: 15873). A written informed consent was obtained from each patient. The study was conducted in accordance with the principles of the Declaration of Helsinki.

The complication rate was the primary outcome parameter in our study. Sample size was calculated based on previous studies.[4,5,7] The complication rate altered 0-6.5% in minimal invasive percutaneous treatment group and 12-30% in lateral extensile approach group. Hence, a minimum sample size of 17 was calculated for each group. With expectation of dropouts, 20 patients per group were included.

A variable block schedule was created on a computer system for randomization. A randomization list was generated by an independent statistician. The list containing the resulting treatment groups was stored in sealed non-transparent envelopes. Patients with diabetes mellitus, osteoporosis (T-score <-2.5) and a history of osteoporosis drug therapy, previous ipsilateral foot surgery or fracture, chronic fracture and open fracture were excluded. Patients aged >18 years with a minimum one-year follow-up as well as unilateral and acute calcaneus fractures were considered eligible. All operations were performed by a single surgeon. Fractures were classified according to the Sanders classification system using computer tomography (CT) images.[11]

Secondary clinical outcomes including timing of surgery, postoperative length of hospital stay as well as American Orthopaedic Foot and Ankle Society (AOFAS)[12] and Foot and Ankle Disability Index (FADI) scores[13] at postoperative six-month and final follow-up visit were used to quantify the functional outcomes and compare the study groups.

Closed reduction using dual-point distraction and percutaneous fixation group (group 1): This procedure was performed using regional anesthesia without using a tourniquet. The patients were placed in the lateral decubitus position with the injured foot placed on a leg holder in an upper and strictly horizontal position (Figure 1a, b). A free approach to the whole foot was essential to mount the distraction device appropriately and position the fluoroscope optimally. Two Kirschner (K)-wires were used for distraction, with the first pin inserted in the anterior process of the talus and second pin inserted in the distal plantar region of the tuber calcaneus (Figure 1c, d). The entry points of the pins were marked using the lateral view. After manual correction of the varus with distraction, distraction was applied using the lateral and axial views until an adequate length reduction was achieved. As indicated by the bending of K-wires, significant traction was needed to successfully reduce the fractures. We used an angle-stable, single-point distraction device on the medial side (Figure 2a). The tension in the foot ligaments (particularly the plantar fascia) can help raise the longitudinal arch through ligamentotaxis as the calcaneal length is restored. For the fixation of the axis, length and height, two 6.5-mm cannulated fully threaded screws were used (Figure 2b). Parallel screws in the central zone can be considered beams supporting the fractured joint fragments above. Local soft-tissue complications significantly reduced with the use of an entry point above the upper border of the Achilles tendon insertion. Reduction of the central joint fragments of the posterior facet was achieved with the lift. Kirschner wires were inserted for the preparation for the insertion of 4.0-mm sustentaculum screws (Figure 3). All patients were evaluated postoperatively with CT (Figure 4). 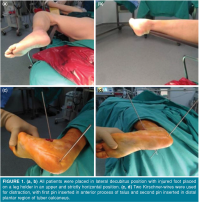 Figure 1. (a, b) All patients were placed in lateral decubitus position with injured foot placed on a leg holder in an upper and strictly horizontal position. (c, d) Two Kirschner-wires were used for distraction, with first pin inserted in anterior process of talus and second pin inserted in distal plantar region of tuber calcaneus.
× 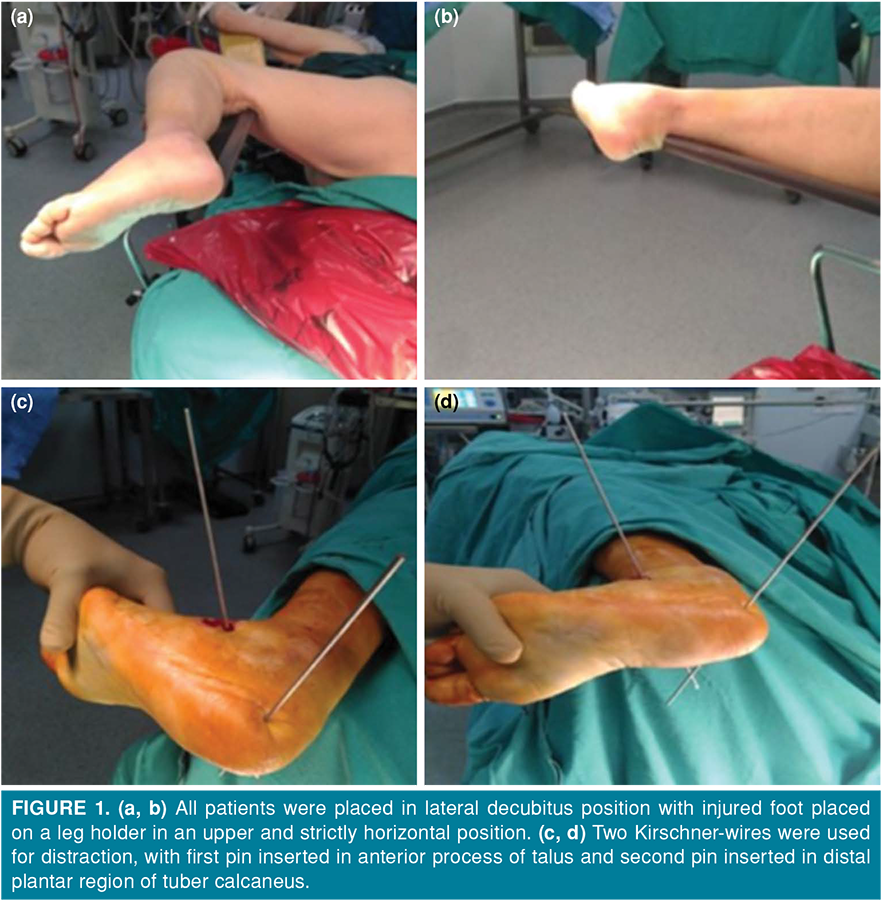 Figure 2. (a) Dual-point distraction device on medial side. (b) For fixation of axis, length and height, two 6.5-mm cannulated fully threaded screws, reduction of central joint fragments of posterior facet, and 1-2 4.0 cannulated screws were used.
× 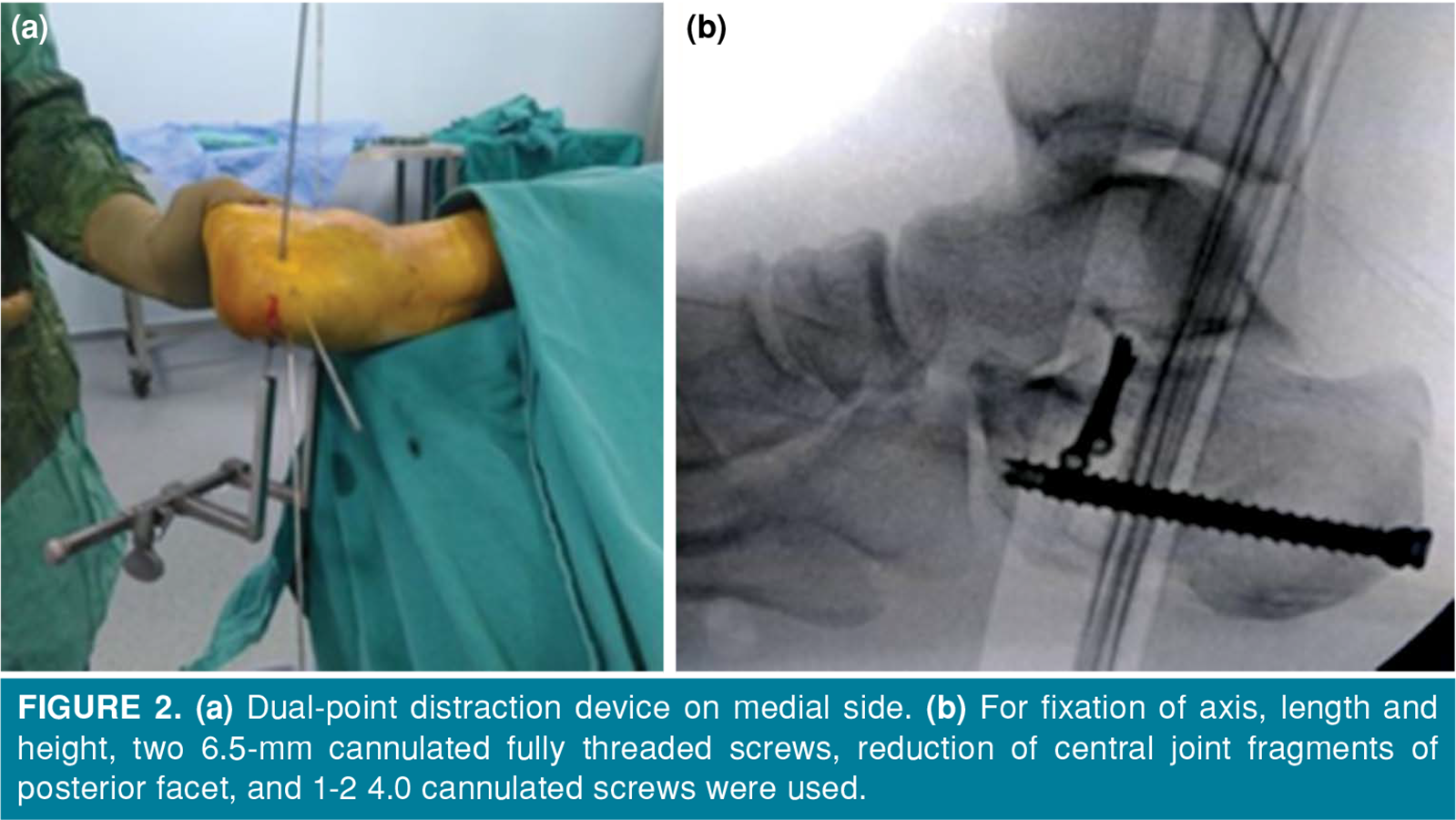 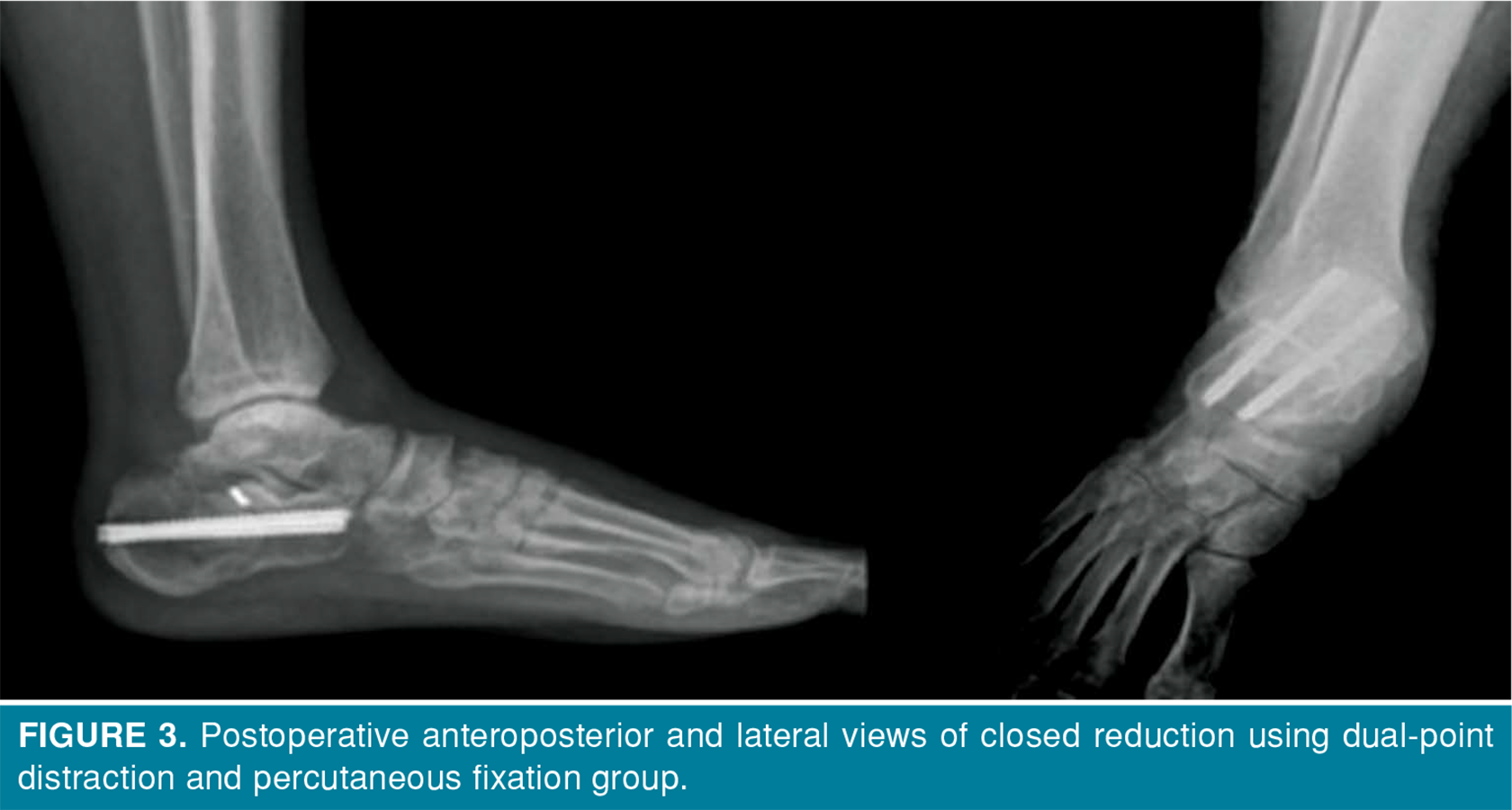 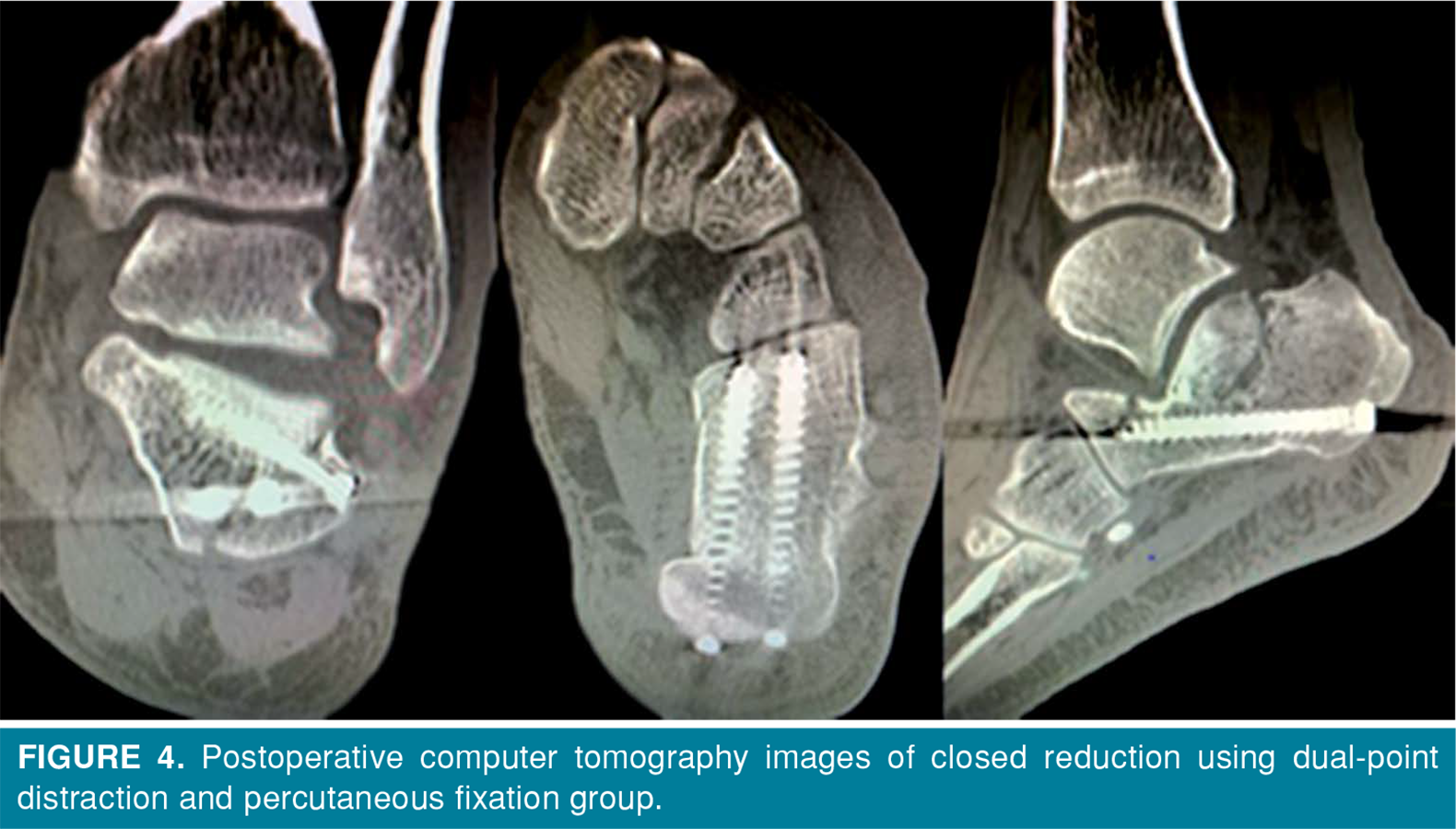 Extended lateral approach group (group 2) (Figure 5): This approach was used under regional anesthesia using a tourniquet. The patients were placed in the supine position, and an incision was performed starting 2 cm above the lateral malleolus parallel to the Achilles tendon at the posterior sural nerve continuing distally towards the sole of the foot. Then, the incision was turned anteriorly and continued at the junction between the lateral dorsal normal skin and plantar skin until the calcaneocuboid joint; thereafter, a dorsal turn of 1 cm was performed. The whole layer of the skin flap was separated to fully expose the lateral wall of the calcaneus, subtalar joint and calcaneocuboid joint. A K-wire was drilled to restore the articular surface and fracture reduction. An artificial bone was used to fill the bone defects. When the reduction was satisfactory, as observed by fluoroscopy, a steel plate was inserted for ORIF. The fracture end, calcaneal plate and screw location were confirmed using fluoroscopy (Figure 4). 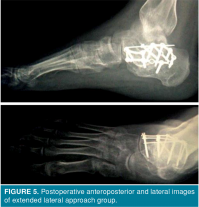 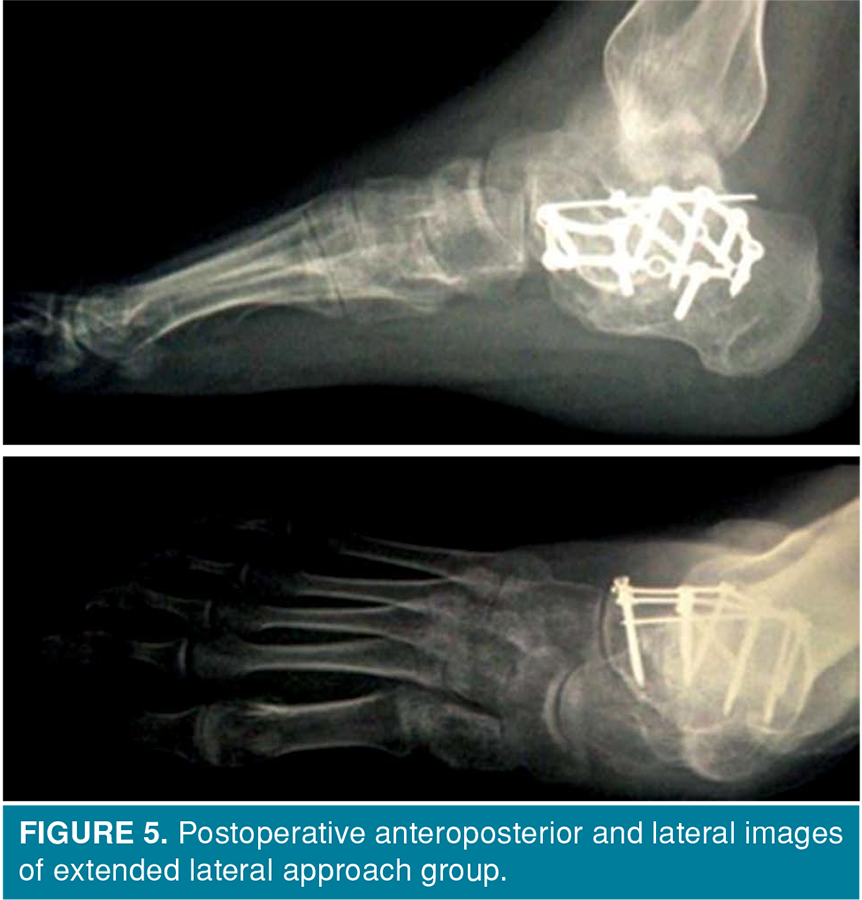 In group 2, a cast was applied for wound healing for postoperative three-five days. A clinical follow-up was performed at postoperative 2, 4, 6 and 12 weeks and at 6 and 12 months. Radiographs were obtained until a radiological union was achieved.

All statistical analyses were conducted using the IBM SPSS version 22.0 software (IBM corp., Armonk, NY, USA). A paired t-test was performed to assess the variation in VAS scores and Gissane and Böhler angles. An independent t-test was performed to compare age, follow-up outcomes, length of hospital stay, operating time, sickness absence period as well as AOFAS and FADI scores at postoperative six-month and final follow-up visits. Fisher’s exact test was performed for the comparison of fracture type, peroneal tendinopathy and complication rates between the two groups. P value of <0.05 was regarded as statistically significant.

Table 1. Comparison of demographic data and primary outcomes between both groups
×

Table 2. Comparison of radiographic and functional results between both groups
×

The percutaneous fixtation approach using distraction forces is the oldest operative treatment for intraarticular calcaneal fractures. A dual-point distractor with or without K-wire fixation has been used in several studies.[16-18] Although many studies have described and investigated the percutaneous fixation approach using a distraction system, no study has compared this technique with the traditional extended lateral approach. In this study, we used dual-point distraction, which was found to be more effective than the extended lateral approach.

Saß et al.[8] used distractor-assisted reduction and grafting for 42 cases of calcaneal fractures and six of subtalar arthrodesis. The mean length of hospital stay was seven days. In our study, the mean length of hospital stay was 3.7±1.2 days after distractor-assisted closed reduction. The possible reason for this is that we did not use grafts and patients who underwent arthrodesis were not examined. In our study, we found that group 1 underwent early operation than group 2.

Many studies have compared the extended lateral approach and minimally invasive techniques to minimize the wound complication rate.[22-25] Most commonly, the sinus tarsi approach was used because it provides a direct exposure of the posterior facet. Kline et al.[22] reported an overall wound complication rate of 6% in patients treated using the minimally invasive sinus tarsi approach. Xia et al.[23] also reported shorter operating times and lower wound complication rates using the minimally invasive sinus tarsi approach than with using the extended L-shaped lateral approach. Closed reduction using dual-point distraction was minimally invasive and showed decreased postoperative pain and sickness absence period as well as a shortened length of hospital stay. In our study, sickness absence period and length of hospital stay were significantly shorter in group 1 than in group 2 (p<0.001 vs. p<0.001). Neither of the injuries occurred in the two groups in that study, and closed reduction using dual-point distraction generally prevents complications in our patients.

This study has certain limitations. First, we included a relatively small number of patients. Second, the average follow-up period was only 24 months; a longer follow-up period is needed to adequately assess the arthritic changes in the subtalar joint, which are among the most common complications. Third, loss to follow-up could potentially be a significant limitation of our study. In this study, the quality of fracture reduction was not assessed according to subtalar arthrosis. Lastly, patient-specific covariates such as smoking habit and medical comorbidities were not evaluated.

In conclusion, to the best of our knowledge, this is the first prospective, randomized study which compared the traditional treatment using the L-shaped lateral approach and closed reduction using distraction. Closed reduction using dual-point distraction can be preferred owing to many advantages including a considerably decreased risk of wound complications, sickness absence period and length of hospital stay as well as superior postoperative rehabilitation with a low pain score.